During the period of Saracosti  the faithful fast for a period of 48 days and not 40, as it is falsely believed: the six weeks of Lent and Holy Week.  This is not obligatory and most people fast for a couple of weeks before Easter.  The fasting period of Easter end after the resurrection of Jesus.

The fasting period before the Assumption of the Virgin, starts on the 1st of August and ends on the 14th of August and of course there are many other days when fasting is part of our religion.

Meat and animal prod­ucts (cheese, milk, butter, eggs, lard), fish (meaning fish with backbones), olive oil and wine (all alcoholic drinks) are not consumed during the weekdays of Great Lent.    Octopus and shell-fish are allowed, as is vegetable margarine, shortening, and vegetable oils, gelatin, olives, as well as honey are allowed. 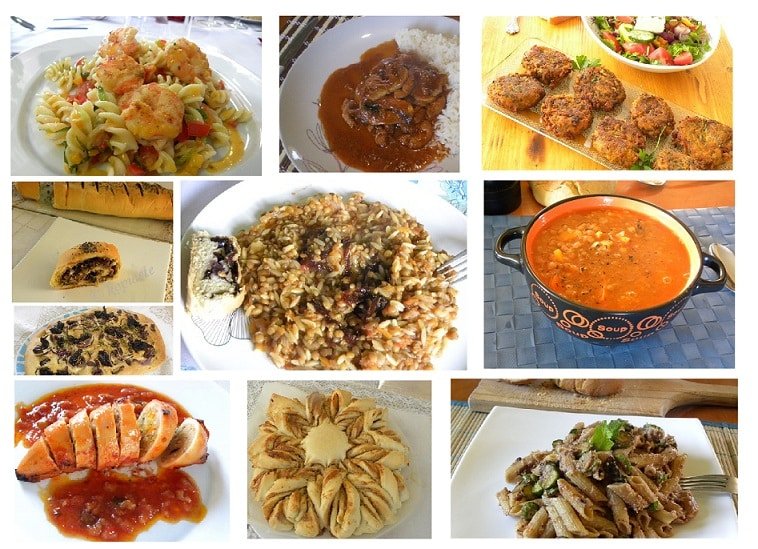 On weekends, olive oil and wine are permitted. Fish is permitted only on two Sundays during the Lenten period: on the Feast of the Annunciation (March 25) and on Palm Sunday (one week before Easter).

The purpose of fasting is to cleanse the body as well as the spirit in preparation for accepting the Resurrection at Easter, which is the most sacred of all observances in the Greek Orthodox faith.

Through fasting, we also learn to feel compassion for the poor and hungry and to save our own resources so that we can help those in need.

During this period I shall try and post mainly Nistisimes Syntages (Lenten recipes).   However,  I do have lots of recipes I have prepared before Lent, which I shall also post.

If you exclude the recipes with seafood, gelatine and honey all other recipes here are vegan:

Black-eyed peas with spinach and Swiss chard in tomato sauce

Rice pilaf with vegetables and vermicelli

Bourekia me manitaria (turnovers with mushrooms)

Snails Stiffado Saganaki (without the feta)

Halvas with fruit and almonds

I apologize if in some of the links you do not find some of my Cypriot recipes.  This means that they have been included in my cookbook and had to be removed.

You can find my Greek recipes in my cookbooks «More Than A Greek Salad» and«Mint, Cinnamon & Blossom Water, Flavours of Cyprus, Kopiaste!» both available on all Amazon stores. Read more here.