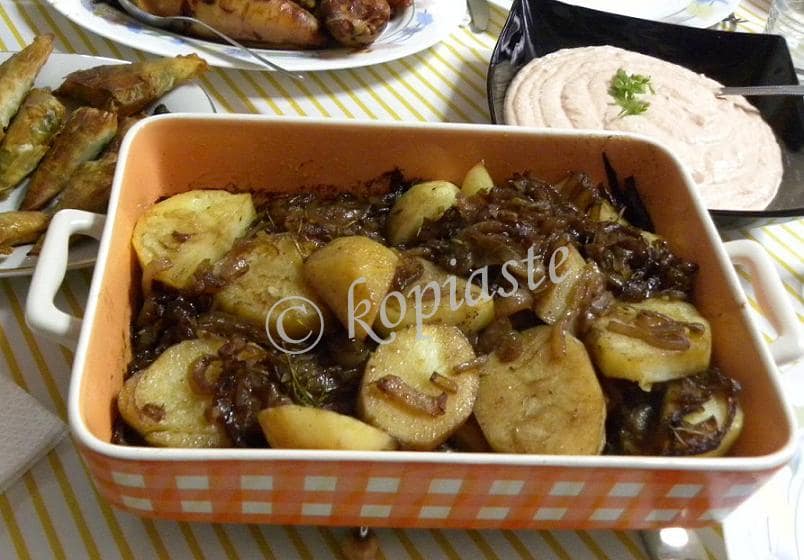 On Monday it was Kathara Deftera or Ash Monday, which marks the beginning of the 48 days of fasting before the Easter which is on the 15th April, 2012.  We did not go anywhere to celebrate because after (almost) recovering from a flu, on Sunday afternoon, after lying down to rest for an hour, when I got out of bed, I felt a sharp pain in the spine which kept me away from doing any activity and was mostly lying down.  Thank God, my husband helped me with the cooking and cleaning up.

The origin of this recipe is from France and reading some French recipes I understood that they boil the potatoes with the skin, then peel and cut into slices.  Then the potatoes are fried in pork fat or butter and the onions are fried separately until transparent and then they are added to the potatoes after being seasoned with salt and pepper and fresh parsley is sprinkled on top.   I also read some recipes in English giving their explanations on how this recipe should be.

After reading the recipes, I changed the method up a bit and made a vegan, much healthier dish. I preferred to peel the potatoes first and then boiled them and as I never use butter for cooking, I used olive oil and added some Greek herbs, oregano, thyme and fresh rosemary which are very flavourful.  I also added some cane sugar and petimezi which made this humble dish into something extraordinary.  The result was excellent.

I served them as a side dish together with stuffed kalamaria and stuffed onions, taramosalata, manitaropitakia (new future recipe – mushroom fritters) and salad. For dessert I made an Orange  Halvas with Chocolate.

Peel and slice the potatoes into 1 cm slices and boil in for 5 minutes.  Drain potatoes and put them back in the pot.  Season with salt and pepper and add half of the olive oil and toss the pot to coat potatoes.

In a skillet heat the remaining olive oil and sauté the onions, sprinkling some salt and the brown sugar.  When translucent  add oregano, thyme, rosemary, balamic vinegar and petimezi. Cook on medium heat, mixing regularly until caramelized and juices are reduced to minimum.

Cook in a preheated oven to 180 degrees C, for at least 1 hour or until browned and crusted on the surface and melting underneath.

To all my readers, Kali Sarakosti – Happy Lent.