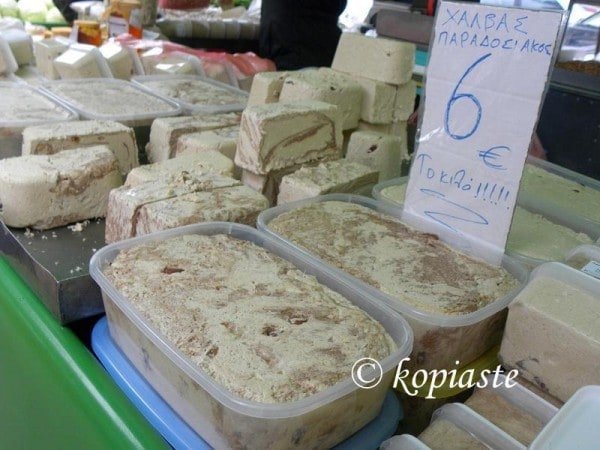 Traditional Greek Macedonian Halvas, is one of the main Lenten sweets.   It’s main ingredient is sesame, which is turned into tahini and used to be sweetened originally with threpsini, which is a natural sweetener produced from raisins.  During the  War, when the Germans had confiscated all the production of raisins in Greece, other sweeteners were used such honey, caramel syrup or glucose and today fructose is also used. 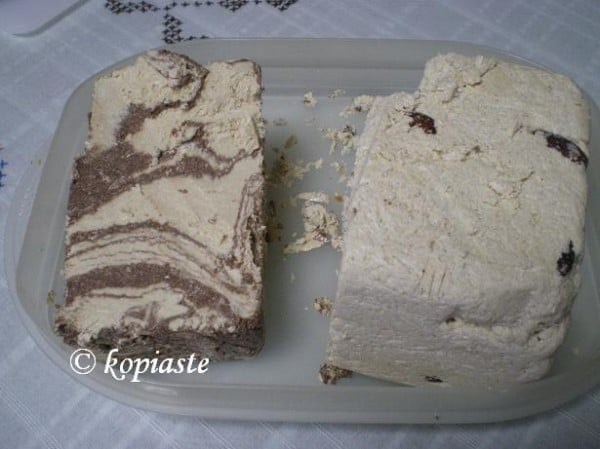 Halvas is flavoured with cocoa or vanilla and other flavours and is mixed with almonds, peanuts or pistachios. 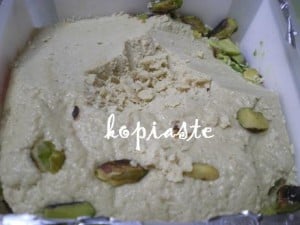 It is  sold packed in blocks or sold by weight.  It is a very good source of protein and calcium and during lent we usually eat it for breakfast but when there’s no dessert at home, it is equally good to get your blood sugar levels back to normal.

My husband tells me that he remembers as a child, that halvas, sprinkled with lemon and cinnamon was served as a mezes for wine.

A very simple dessert my mother would make was to crumble halvas and make it as a filling for bourekia (turnovers) with leftover phyllo.  During lent I always make some usually when I have some leftover phyllo from daktyla.   These are made quite bigger from daktyla and during frying, halvas melts and caramelizes.  For this reason make sure that the filling is enclosed properly as if halvas leeks from the pastry during frying, the oil will then burn and become black.

I made my own version using raisins marinated in Grand Marnier, extra almonds and lemon marmalade.   All the ingredients added additional flavour and you had a bite with lemon taste or a crunchy almond here and there and a sweet aromatic raisin in another bite.  Another lovely filling would be to use the cocoa flavoured halva and add small pieces of chocolate (without milk) and orange marmalade or caramelized orange peels.

200 grams of halvas with almonds

Marinate sultanas with the Grand Marnier for 30 minutes.  Add lemon marmalade and mix.  Crumble halva and add  the sultana mixture as well as extra coarsely cut almonds.  Mix well into a thick paste. 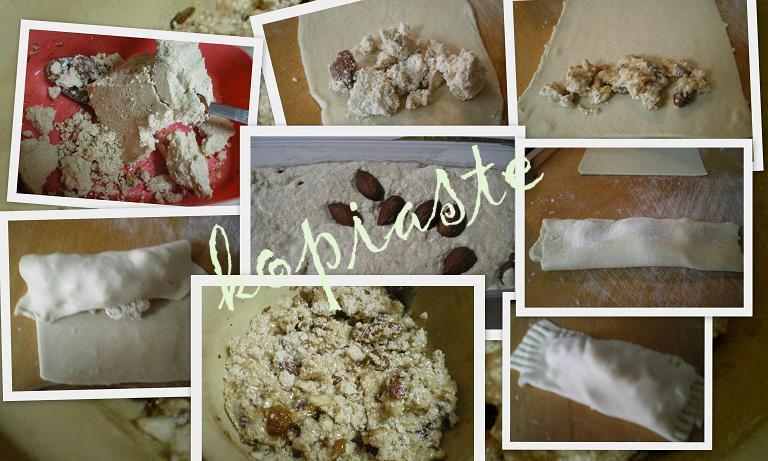 Roll out the phyllo into about 10 cm stripes and place a tablespoon of the mixture.  Roll twice and cut the phyllo.  Press with a fork to enclose the mixture.  Place on a floured surface and continue untill all are finished.

Heat the olive oil and fry on both sides until golden brown.  Place on kitchen paper to absorb the excess oil. 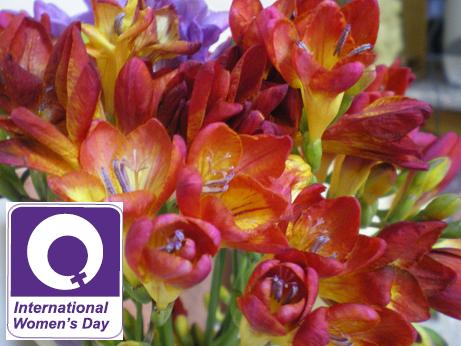 March 8 is a major day of global celebration for the economic, political and social achievements of women.

We are very lucky to be born and living in countries where women are treated equally towards men.    Even now in the 21st century there are still may oppressed women.

There is a lot of information which you may read here. 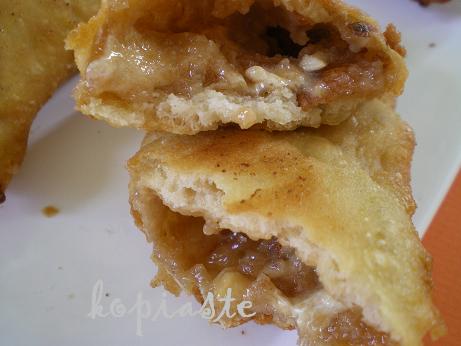 I stumbled upon this blog post while searching for the best recipe for halva paste or cream to use in my sour dough cake. I remember my grandmother's uncles owned a pastry/sweets shop in Salonika back in the day, and I trust that Greek sweets can be very good. So I enjoyed reading this entry until I saw your comment on Macedonia - the country where I happen to be from.

I don't wish to respond to any of your inciting remarks, but to tell you that you have just ruined it for me. No need to politicize a food blog, this should be a pleasant and unbiased experience for all people globally.

p.s Frying is not that healthy.

It is your country's propaganda which forces us to add comments like that. You have nothing to do with the real Macedonians. You are slavic who came to live in that region which was Greek for millenia, so start calling yourselves FYRO -Macedonians and we will have to problem with that.

What a gorgeous dessert! I love the photos :).

I've always wanted to make my own halva and I think this is a fine use of the delicious sweet. Yet another beautiful recipe from your kitchen.

I, too, am addicted to halva! I haven't had it in too long. I need to get some for sure. The bourekia look SO good!