Koulouri Thessalonikis (also called Simitiko), is a street food, round shaped bread product with a hole in the middle, covered with sesame seeds, crunchy outside and soft inside.

It is one of our healthiest snacks as it is low in fat but very nutritional and most dietitians / nutritionists will tell you to eat one for breakfast or as a snack. In addition, it is very cheap, as it costs around 0,50 – 0,60 cents.

The street vendors also sell some of those triangle cheese (not to mention the name) with the smiling cow to accompany it. 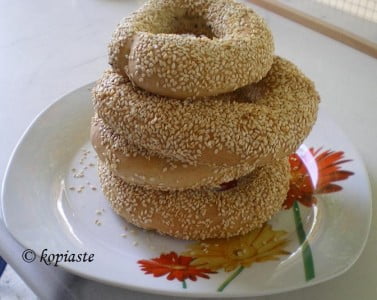 It dates back to the early years of Christianity. This played an important role in their nutrition but it was widely made known during the Byzantine years when it first appeared in Constantinople and strange enough it became popular in Thessaloniki when the refugees brought it back in 1922.The word koulouri comes from the ancient Greek “κολλίκιον”, kollikion, which means a round bread made with coarsely ground wheat and this is mentioned in many Byzantine scripts.

The profession of bread making or koulouri making was exercised mainly by Greeks from Heperus who immigrated to Constantinople and it is said that their heads were funny shaped because of the weight they had to carry every day, as they had to carry baskets or wooden planks with koulouria on their heads. This was a highly respectable (and may be prosperous) profession at the time because the mothers would bless their sons and wish them all the luck to become vendors of koulouria in Constantinople.

These craftsmen would begin heating their ovens burning wood just after midnight and then they would prepare the yeast, make the dough and before the crack of dawn everything was ready.The wonderful smell of baked bread and sesame seeds was a temptation no one could resist.The street vendors with the load of baskets or planks with koulouria on their heads, would scatter towards all directions and by 10-11 a.m. they were sold out.

In Constantinople the vendors would advertise their product by shouting out loud to attract people “Koulouria Thessalonikis”. Many years later, the refugee-vendors coming from Asia Minor to Athens, would sell the same product calling it with the same name and selling it in the same way they used to do this profession for hundreds of years. This is how this popular snack has taken its name.

(Source: Adapted and translated by me from The Union of Bread makers of Thessaloniki) 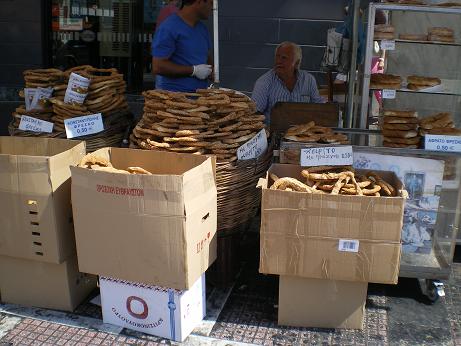 Koulouri was and still is wonderful as a snack for any time of the day, especially for breakfast. 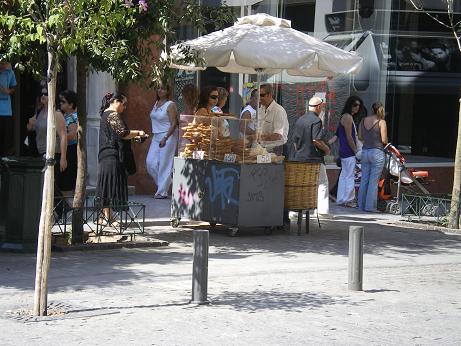 You can eat it as it is or cut in the middle with butter and honey or jam, or with any filling you might choose.  My favourite (first picture above) is butter, halloumi, smoked turkey and citrus marmalade. 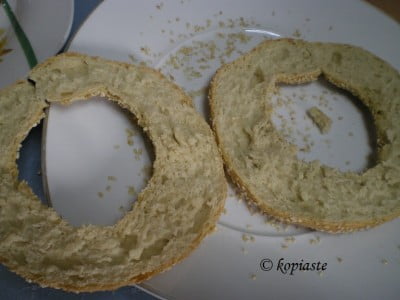 Nowadays koulouria are sold either in bakeries or by street vendors in the crowded streets with shops, nearly one at every corner selling thousands of them. 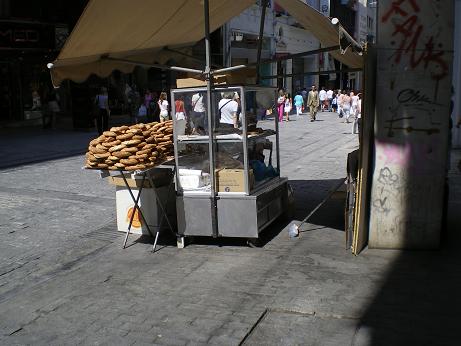 On Sundays you can find them outside churches, as people go to church without eating, so when the liturgy finishes it is a lovely treat until you get home for breakfast. 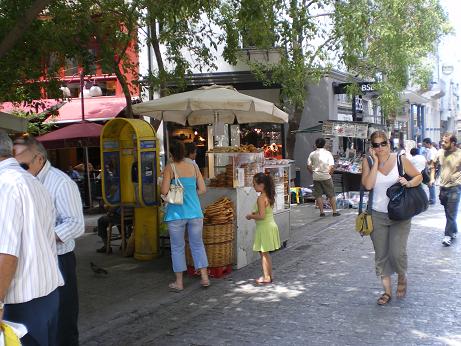 Tip:  We can test the water by putting our little finger in the water.  If we can stand the heat then the water is fine.

If they are too many for you to eat you can put them in zip lock bags before or after baking them and freeze them.

I am submitting this recipe to Susan, of Wild Yeast, who is hosting the event Yeastspotting. 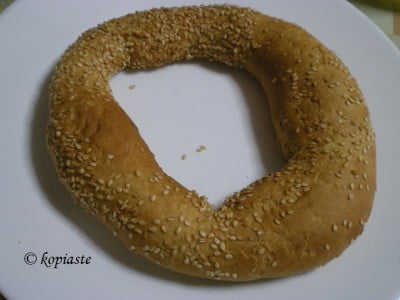 Hi I live in Crete and have been looking all over for a recipie like this so my little boys can have something 'homemade and healthy ' in their breakfast packed lunch box.Thankyou (fingers crossed I can make them as delicious as the bought ones !)

After so long searching for the name of what my grandmother from Ioannina used to make for us when we were kids, at long last I think I've found it. Do you pronounce this as 'klooth ya' or 'klooth ee yah'? That's how she said it, phonetically. They look exactly like the cookies she used to make. I tried a recipe from a wonderful Sephardic food blog called 'The Boreka Diary' where these same tea biscuits are called 'biscotios de huevo.' The recipe you have here and the one I tried from that blog were almost identical. I tried out the recipe from that blog, and they came out really well. I think my nunna would have approved. So, then, my question is (sorry for being so long-winded!) are these the same cookies that I remember from my childhood? And do you pronounce them as 'klooth yah'? One day, I will visit her birthplace in Ioannina and sample the real thing.

Just love them they are the best warm with milk in the morning. I have never made any kind of bread and you made is so easy. Thank you so much. We will be making them fresh every week end.

I've been looking for a recipe for these sesame rings forever! I was in Greece 25 odd years ago and I used to see the old ladies walking their donkies loaded with koulori and i never forgot how delicious they tasted early in the morning. Back then they cost only 5 or 10 cents. i also didn't have a camera but somethings you just never forget. thanks for a great memory.

Hi Marie. I am so glad that I helped bringing you some lovely memories.