Some people may be grossed by the idea of eating snails but snails are mollusks, which are a group of animals that have a hard shell and are similar to clams or oysters, which I am sure a lot of you have tried and liked.  Snails should not be confused with slugs as they are not the same animal, although both are gastropods.

Before going to the recipe lets find out more about these gastropods.

In Greece and Cyprus they are known since antiquity and considered to be a delicacy.  Snail fossils have been found by archaeologists in  Akrotiri (Santorini) and in Paphos, Cyprus from thousands of years ago.

Aristotle gives a thorough description of this mollusk  through his zoological works.  He must have loved snails very much because he invented a spoon, on the edge of which there was a spike with which he could remove the snail intact.  He distinguished the cephalopods, calling them malakia, from ostracoderma in which he classified recent gastropods (which he called stromvode) and bivalves (dithyra).

Athenaeus  in about 228 A.D. refers to snails in “Deipnosophistai”, one of the most famous cookbooks of the second century.  Deipnosophistai comes from two Greek words, deipnon, “dinner” and sophist, which may be translated as The Banquet of the Learned or Philosophers at Dinner or The Gastronomers or dinner-table philosophers, where a number of learned men,  met at a banquet to discuss food and other subjects.

Snails are referred to as an aphrodisiac food by Greek comic poet Άlexis (Ancient Greek: Ἄλεξις, c.394 BC – c.288 BC) and the Greek physician Heraclides of Tarantum in his work “Symposium” who also confirms that snails help produce semen.

For the ancient Greeks, snails located on the edge of the stem of the plant was a sign from the gods that henceforth they could harvest their crops.

Hippocrates and Galen considered that snails possessed medicinal properties against hernia and  dropsy.

The ancient Greeks had observed the behavior of snails during the courtship phase.  The love dart (gypsobelum) is produced in some terrestrial snail groups’ genital apparatus,, where it shoots its dart to stimulate the genital area of another. It is said that the vision of the winged god of love, Eros (Cupid), throwing darts in lovers, stems from this observation. 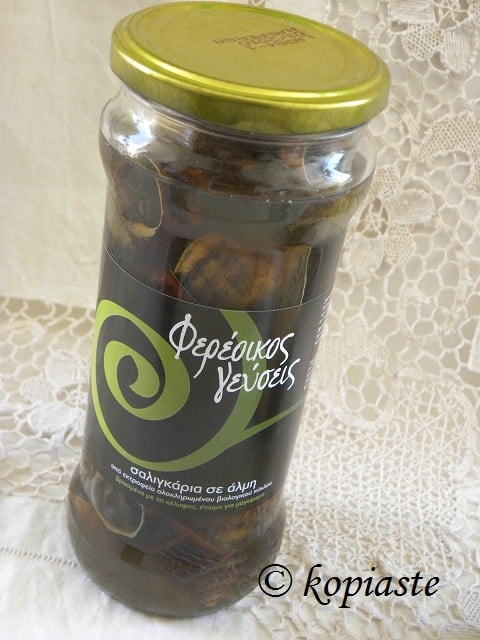 One of the delicacies sent to me by GreekFoodShop were snails.  I was so excited because I hadn’t eaten snails since I left Cyprus, for over thirty years.

Living in Athens in an apartment, is not easy to find snails and I never thought of buying them in brine.

I have seen them sold in Cretan shops but the procedure to cook them is not easy.

I remember my mother would collect them after the first rainfalls and keep them in a box for several days.

She would feed them with flour and clean them regularly so that all impurities were removed.

Once they had nothing left to excrete, they pulled back into their shells and hibernate, forming a membrane across the top that sealed the hole. That had to be removed before cooking.

She would wash them thoroughly and boil them in salted water with vinegar, which was discarded and then she would cook them in a tomato sauce, boiled with olive oil and lemon or would make them savoro.

Snails are one of the healthiest Greek foods, high in protein but low in fat contents. It is estimated that snail is 15% protein, 2.4% fat and about 80% water.

This is one of the foods that kept the Greeks alive during the famine of World War II and probably something we should consider putting back into our nutrition.

As you can see in the picture there are two plates.  Before adding the feta I removed half the amount for my husband, whose diet for gallbladder should include only low fat food. 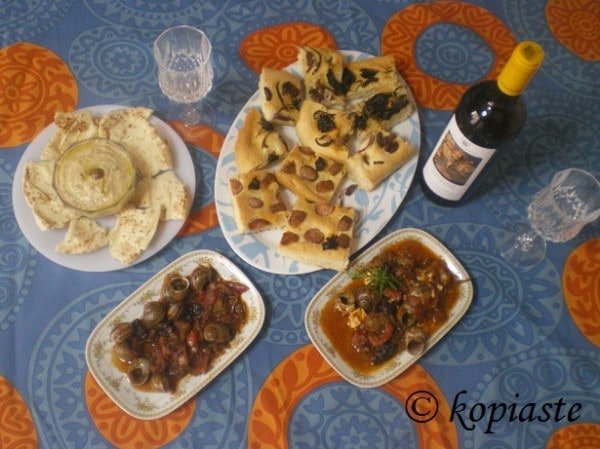 Reading the label, it says snails in brine, cooked in shell, from open snail farms in full biological cycle, without additives or preservatives: Wash and drain snails. Add the ingredients you want and in 5-15 minutes you have prepared your favourite recipe and that’s exactly what I did.  Actually the first phase of cooking snails like my mother used to do, has already been done for us.

I could not remember the exact way my mother would cook  them but I could remember some of the flavours and using my instinct and using the knowledge I have acquired all these years I combined a couple of recipes to have this result.

One of the recipes is stiffado which is a stewed dish with lots of onions and vinegar as well as tomatoes and saganaki because of the stew and feta cooked in the skillet.

The sun-dried tomatoes added sweetness and depth to the sauce together with the good quality white dry wine, which simmered to enhance the flavour of the sauce, leaving its wonderful aroma.

Note:  For people who have never eaten snails before you may be wondering how to eat them.  With the help of a fork or a toothpick, you remove the interior (the edible part) and the shells are discarded. 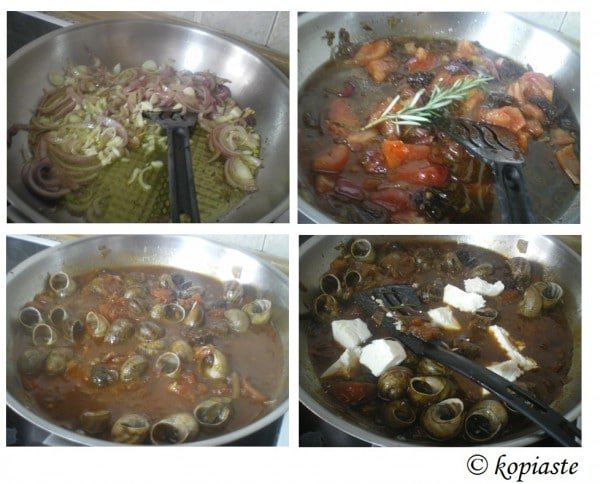 250  grams snails with the shell

Wash and drain the snails.

In a heavy skillet saute the onions until translucent.  Add the garlic and mix for a few minutes to release its aroma and then add the sugar.  Mix until the onions caramelize.

Add the vinegar and mix.  Add the fresh tomatoes, the sun-dried tomatoes and tomato paste, the rosemary, salt and pepper and finally add the wine and mix.  Cover with the lid and bring to a boil.  Lower heat and simmer for 10 minutes.

Add the snails and cover with the lid and cook for 10 minutes.

Finally add the feta and cook for 1 – 2 minutes. 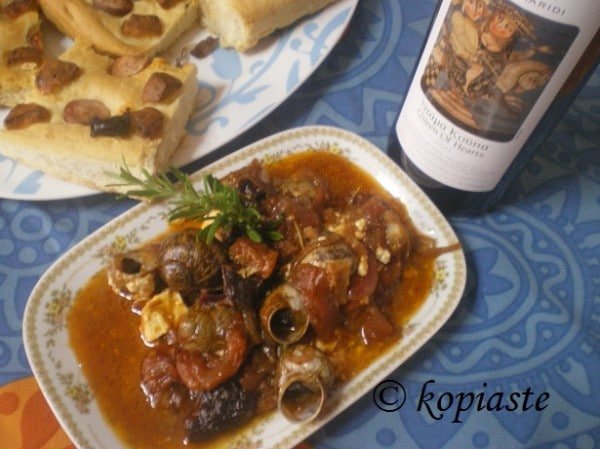 I wanted to try the extra virgin olive oil raw in other mezedes and have experimented with a few recipes.   A good quality extra virgin olive oil makes a  huge difference when used raw as you can really enjoy its fruity taste.  I have made Avocado Tzatziki as well as a few other recipes which will be posted soon. 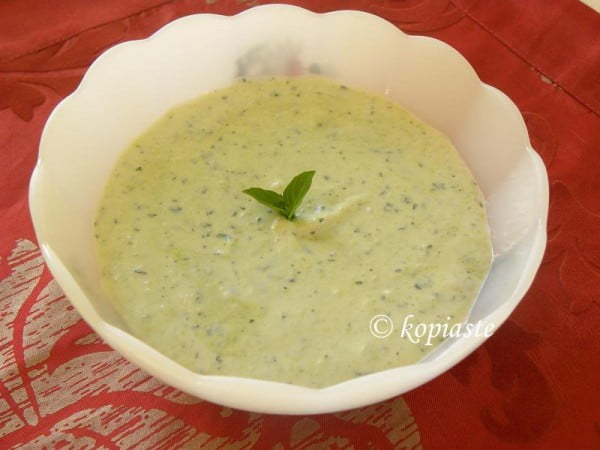 My grandfather used to eat snakes all the time, but I don't think I have the courage to eat them... maybe some day. They look appetizing, though.

Its a new recipe to me. I did not knew about this recipe before. I think you have enjoyed this delicious recipe with the crunchy shells.

I did not mention in the post but the shells are discarded.

This definitely looks delicious and I might want to try this and ask for the help of my husband.. Thanks for the idea..

This will be a great dish yo eat snails for the first time!!!!!It looks delicious.

Wow, it sounds like preparing the snails was quite the arduous process for you mom! I didn't realize there were so many steps involved. I've only ever had them from the jar or can.