Mpamies (okra with sun-dried tomatoes) is a light and healthy low carb dish which is full of nutrients and other healthy properties.

It is usually stewed using fresh tomatoes but in this recipe, I chose to stew them adding sun-dried tomatoes as well.

When cooking fresh okra what I learned from my mother was to cut the stem around but without revealing the seeds.

After cutting it carefully that part is dipped in salt, and when all of them are done, they should be sprinkled with wine vinegar and then placed in the sun for about 1 hour.

This is the procedure to avoid the slimy.

Keep them covered with a tulle to prevent any flies or other insects from sitting on them.

This time of the year there are no fresh okra in Greece so I used frozen ones.

To be frank I prefer them because they taste just as good and you save a lot of time without having to do the above procedure.

Now that I am on diet,  I cook “ladera” at least once a week.

For those of you who don’t know what “ladera” is, this is our Greek vegetarian dishes, which can be anything with seasonal vegetables, cooked with olive oil, because olive oil is their main condiment.

I suppose you are wondering how can I be eating “ladera” when olive oil has so many calories?    The answer is the way of cooking.

In the traditional way of cooking “mpamies” you needed at least 1/2 cup of olive oil (950 calories) to shallow fry mpamies and then they were removed to the saucepan and the sauce was made in the remaining oil.

I now use a non stick sautéing pan and with only 2 tablespoons olive oil (240 calories),  the dish is lighter and healthier but keeps all the taste and flavour.

In the traditional Greek and Cypriot recipe, which is the same, no garlic is added but I have revisited some of my cooking habits and now I add it in many recipes.

Another ingredient I have been using lately together with tomatoes, is tomato paste, which adds rich flavour to a dish.

Dill is another ingredient I was not really fond of because there was no dill in Cyprus (just fennel fronds) and you will not find it in any Cypriot recipes.

However, in Greece dill is used a lot and you can buy it anywhere, whereas you rarely find fennel fronds in Greece, unless you live in the countryside where it grows abundantly and  you can find it some times at the farmers’ market, so I always have some at home to use.

Many people add some sugar in recipes with tomato sauces.

Sugar is added to the sauces to balance the acidity of tomatoes and although at the early stages of cooking I did use a pinch of sugar in my sauces, mainly because I watched Vefa (the first Greek Cook who had a cooking show on T.V.) using it.

I find that Greek tomatoes are so sweet and delicious that this is not needed.

If I need to add some sweetness to a stew I add a grated carrot and if it doesn’t pair with the dish, I add some honey instead.

When I was cooking this dish yesterday, when I reached out for the canned tomatoes and the tomato paste I saw the sun dried tomatoes in the cupboard.

Suddenly a light bulb flashed into my head, like in the cartoons.

I thought it would be a great idea to use them, although a little risky as I didn’t know what the outcome would be.

I also didn’t know if my the children would like them but as we say in Greece, “Ο Τολμών Νικά” (O Tolmon Nika – he who dares, wins).

The outcome was more than I expected and the okra were very delicious.

The sun dried tomatoes gave a wonderful deep colour to the sauce as well as rich flavour and the only risk of adding more calories is to mop up that delicious sauce with lots of crusty bread!!

Note:  The sun dried tomatoes I used were not preserved in olive oil, so no more calories were added to the dish. 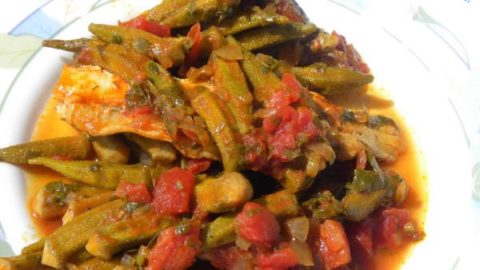 Greek stewed okra (mpamies) are cooked and then the pollock fillets are cooked in the stew. 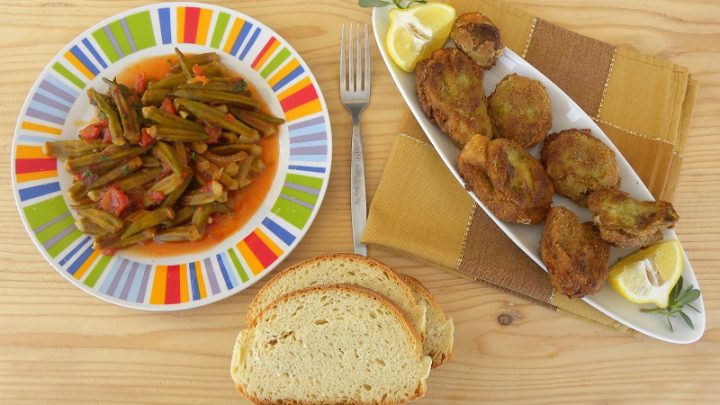 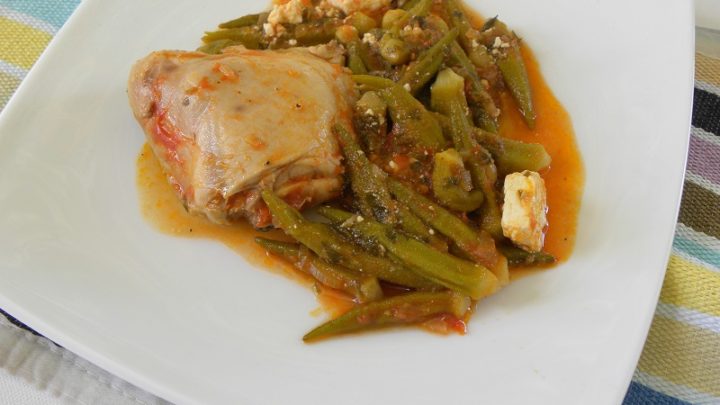 Kotopoulo me Mpamies (Chicken and Okra Stew with Feta)

Okra health benefits are very important that is why people should have them often in their diet.

Mpamies are my absolute favorite vegetable to make greek-style with tomatoes. I've never tried with sundried tomatoes, but it sounds delicious!

That looks really tasty! I have been wanting to try okra.

I love cooking okra with tomatoes and have done it with fresh tomatoes. Have not tried cooking with sun-dried tomatoes though.

Sounds amazing. I'm a huge fan of okra and I'm sure the sun dried tomatoes gives it a wonderful base flavour.