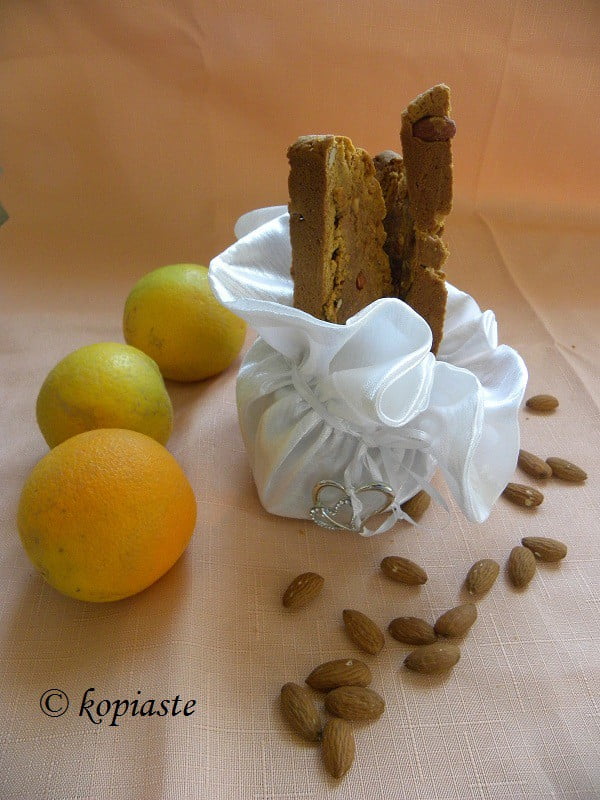 Every Friday morning we have our Tupperware meeting and some of us bring along cookies, cakes, pies etc.  Two Fridays ago we had tons of things to eat but I liked these ladokouloura (biscotti) a Cretan lady had brought with her and I asked for the recipe.   I shall give you the exact recipe as it was given to me and you can make as many as you like.   I made one fourth of the recipe and had quite a lot of cookies.

When baking them, I had a misfortune which in the end wasn’t that bad but I was upset at the time.  Just a little while after putting the tin in the oven we had power failure.  They were nice and brown outside but inside they were still soft.   So instead of baking them the second time for ten minutes, I cut them with the knife and spread them in the tin and they baked only with the warmth of the oven.

Baking time:  about half an hour

I forgot to ask her about instructions, so I mixed the liquid ingredients first and then added the remaining ingredients.

I divided the dough in half and form two logs.  I placed them  on a baking tin lined with parchment.

I baked them for about 35 minutes in a preheated oven to 180 degrees C, or until logs were light brown.

When able to handle them I cut them  into 1cm slices.

I  baked them again for about 10 minutes, until dry.

Baking time varies if made into smaller biscotti.

Bravo Ivy, they look great. My grandmother made ladokouloura regularly so I have a weakness for them. :)

Oh Ivy your biscotti really is lovely, this is something I have on my list of to do bakes having never made this as yet!

How delicious Ivy! I love biscotti. And koulouria :)I have never made koulourakia myself...what a horrible Greek I am. I always just eat my yiayia's when I see her. Hah. I need to make some myself!

These sound wonderful Ivy! I'm starving right now and would happily eat these for dinner.

Thanks, shall check your answer.