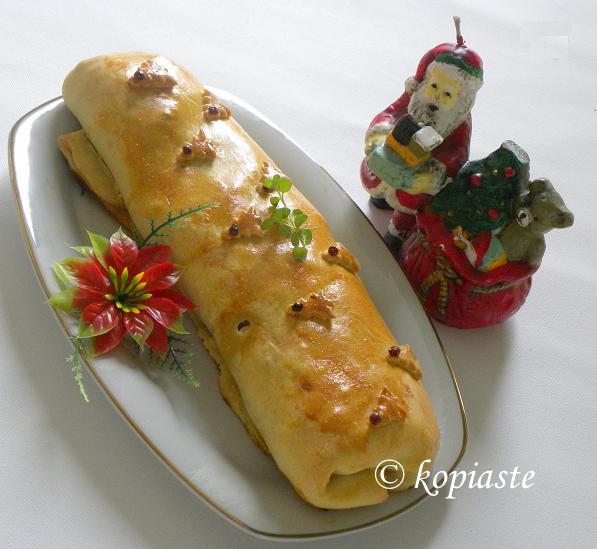 Hope you all had lovely Holidays.  I cannot say the same, as we had to spend a whole day in hospital on Wednesday, after my son had a stomach virus and then on Christmas day my husband caught it as well but thank God it only lasted for a few days and they are beginning to feel much better.  Our Christmas presents are still under the tree as no one was in the mood of opening them on Christmas day.  My son was planning to do his shopping the day he got ill, so he did not manage to buy all his presents, so we have decided to open them on New Year’s Day. 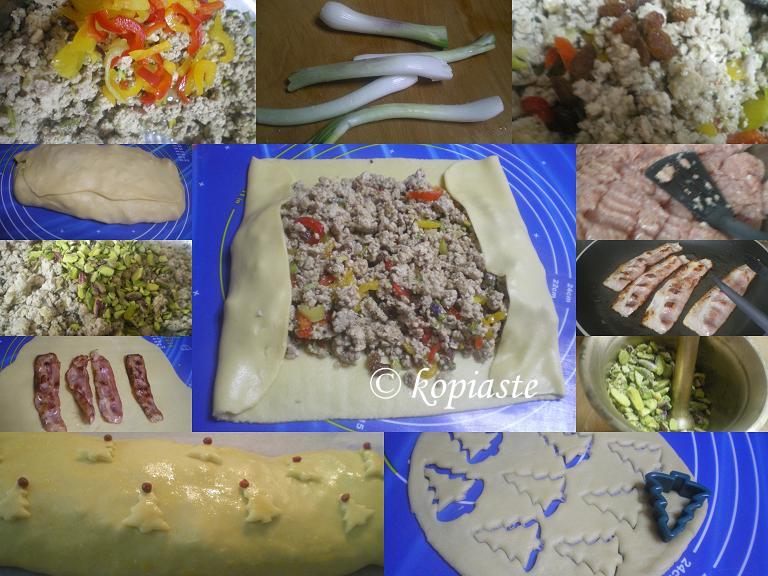 I still brined and stuffed a turkey for Christmas although we had lots of leftover for the next day.

We sort of celebrated Christmas today as it was the first day the whole family was feeling like eating so I made a few special treats for them.   All the following recipes are my concoctions, except the tyropitakia, although they also had a tweak.  If you would like any of the recipes I would gladly e-mail them to you. 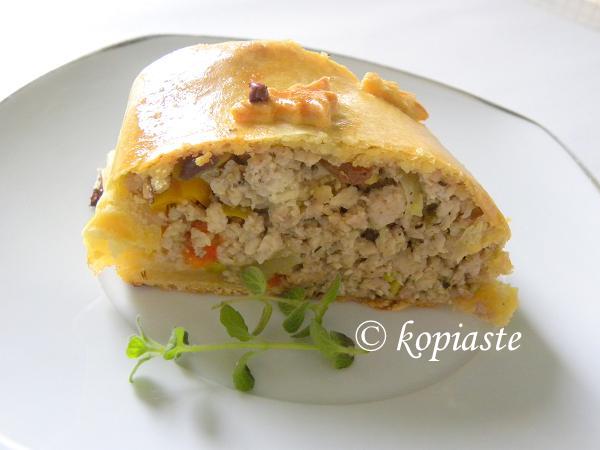 Before today’s recipes, I made this recipe last weekend and have used turkey mince which I sauteed and you can see most of the ingredients I used in the collage.  I then wrapped the cooked minced meat in a provencal galette pastry and baked it.  I decorated it with pastry Christmas trees and a pink peppercorn on top.    The ingredients used in my recipe is for two roulades.  You can always add half the ingredients but I am of the opinion that if you can freeze food, as in this case, you save time and money by making it once and have more time for your family or for yourself.

I made a similar roulade today but I made a different phyllo similar to kourou which is a phyllo with butter and yoghurt.   The minced meat was not cooked but as I said I usually make more quantities and freeze them and in this case I had some turkey burgers ready which I used.  Again I made a roulade but with a different approach as it was filled with boiled eggs, smoked turkey fouantre and some Greek cheeses. 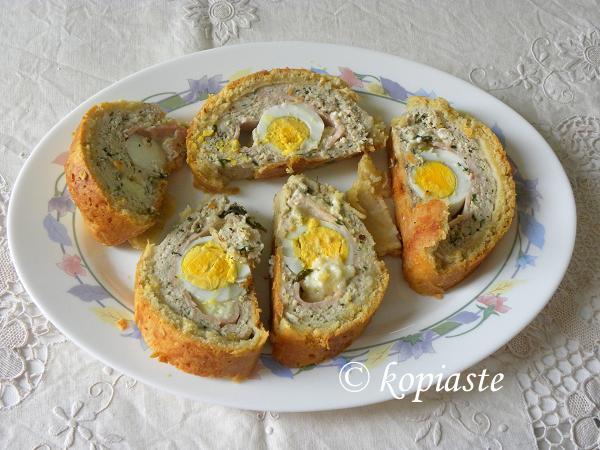 I made more phyllo and used it to make kourou tyropitakia with two different cheeses (mini cheese pies). 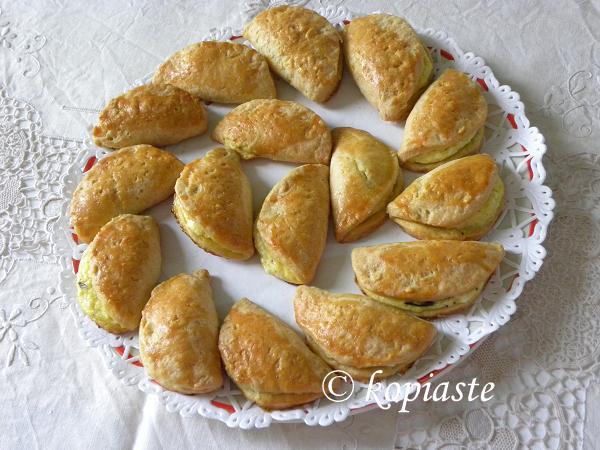 Last but not least I made a special baklavas and I believe that no one else has made anything similar before.  It has three kinds of nuts in it, the usual spices and after baking it I dipped it in chocolate.  There is nothing special to what I have described above but apart from the nuts I have used another unusual ingredient in the filling which makes all the difference and made a totally different syrup which you can see in the picture that it is pink.    I would not like to reveal these ingredients in the post for obvious reasons. 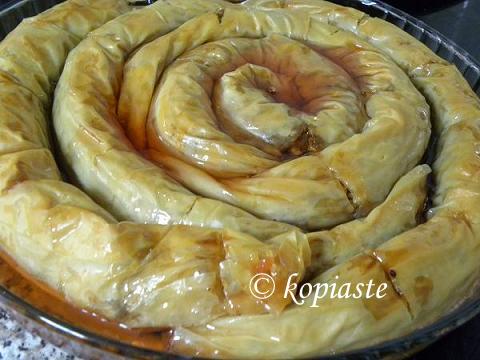 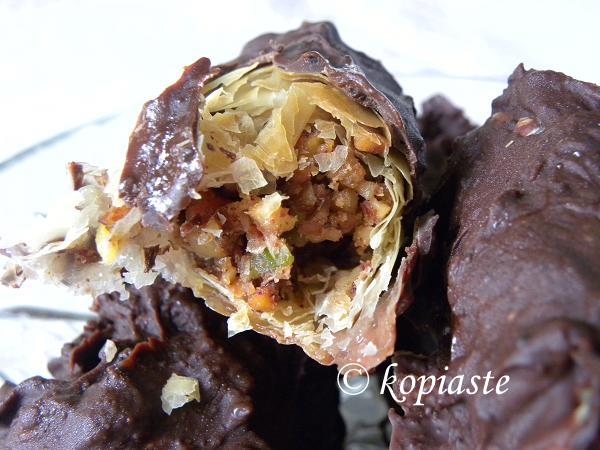 I am not sure whether I will post again before the end of the year so I am sending you my best wishes for Happy holidays and all the best for the upcoming New Year with lots of tasty food and good health to enjoy them. 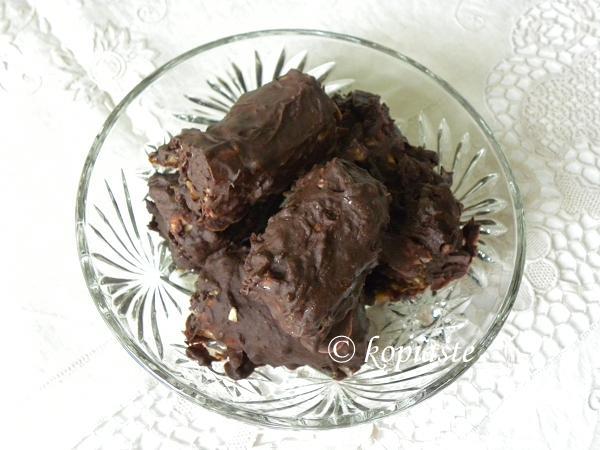 Glad to hear you nurse everyone back to good health! Wishing you a great 2010 filled with fun and good health!

I especially loved your roulade. I really must try it. All the best to you for the New Year

I hope everyone is feeling better!!

Happy New Year to you and your family!