Glyka tou koutaliou, which means spoon sweets, are traditional, homemade sweet fruit preserves, served in a spoon as a gesture of hospitality in Greece and Cyprus.

I remember that in Cyprus spoon sweets were usually offered to guests served by the teaspoon in a small china or crystal dish, with coffee or tea and cold water.

The richer people offered the spoon sweets in silver vessels (sort of basket shaped which had special places for the silver spoons to stand round the basket) and inside they would put the sweets preserves.

The old days they would put the preserves, especially the small ones such as cherries, sour cherries, grapes in a bowl with a spoon and the guests would put as much as they wanted in small plates.

They can be made from almost any fruit, though sour and bitter fruits are especially prized. There are even spoon sweets made from vegetables and flowers.

The abundance of fruit and vegetables made Greeks to preserve them from antiquity.  Originally they were made by cooking fruit with honey.

When cane sugar was introduced to Europe, it was very expensive but eventually its production and finding other sources to extract sugar, such as beet sugar, made it cheaper so honey was eventually substituted with sugar. 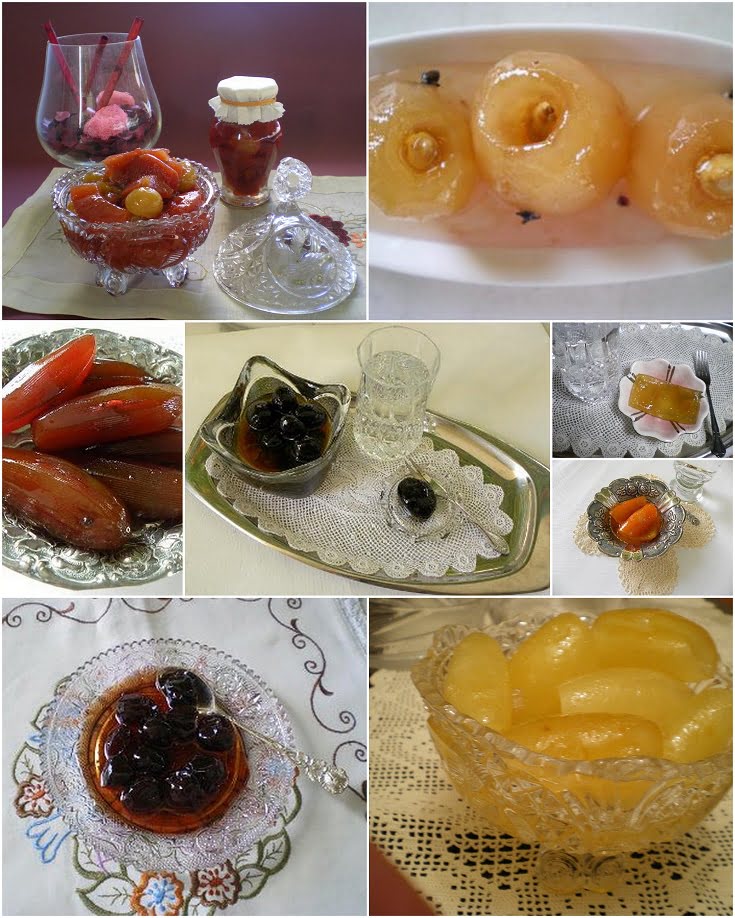 Working housewives have so little time to spare that they can’t devote to such time consuming work and prefer to buy them from supermarkets, which are usually made using glucose and are of inferior quality.

As a result, traditional recipes are gradually being forgotten and whatever spoon sweets are made and consumed are all too often no more than poor imitations of sweet memories.

However, in some villages, women gather together and create agricultural cooperatives in which they make traditional products and sell them.

Are fruit preserves made only with fruit?

Not only fruit are made into sweet preserves but also some vegetables and nuts.

Other varieties include vegetables or nuts such as  eggplant, tomatoes, carrots, pumpkin, pistachios, hazelnuts, walnuts and other nuts, and flower petals like roses or citrus blossoms.

Many fruits or parts of fruits that are normally inedible, such as citrus peel and water melon rind, can be made into sweet, flavourful preserves, as can unripe nuts such as green walnuts, pistachios or chestnuts and vegetables such as eggplant, tomatoes, carrots etc.

Back then, they used to add colour  to red spoon sweets, but nowadays they have been forbidden as dangerous to health and usually retain the original shape, colour, aroma and taste of the fruit.

Pickling lime makes spoon sweets much crunchier and do not become mushy like jam.

When my mother, or before her my grandmother, used to make spoon sweets there wasn’t any picking lime available and they would go to constructions and ask for some lime.

There is a certain procedure of turning lime into pickling lime but I won’t go into that, as it is quite dangerous.

Where to get Pickling Lime

If you want to make preserves the old fashioned way, I don’t know where you can buy it in your country but you can certainly get it online.

I know that in Cyprus you can  get it even at supermarkets. 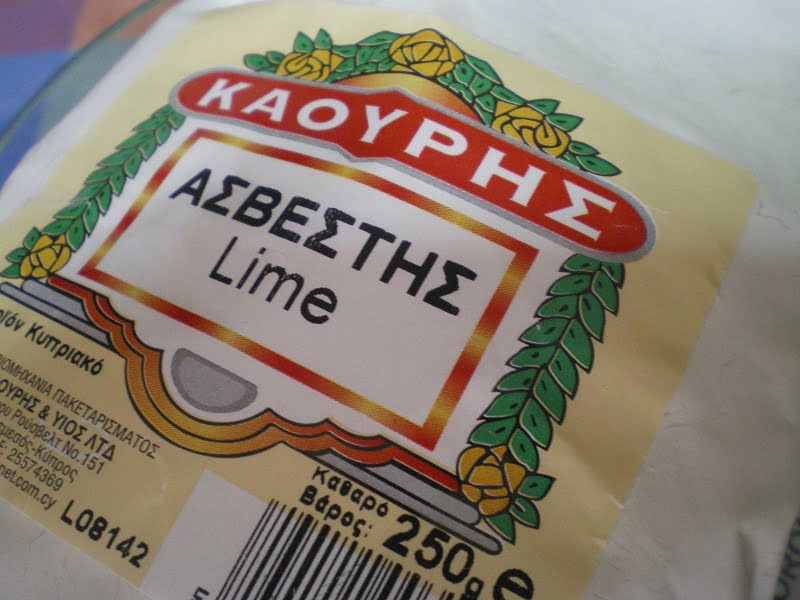 For many years, I would bring some back to Greece from Cyprus and when I run out of it, I did not add any at all.

I eventually found out that in Greece you can get lime at hardware stores where they sell construction materials.  You have to ask for hydrated lime and not ordinary lime. 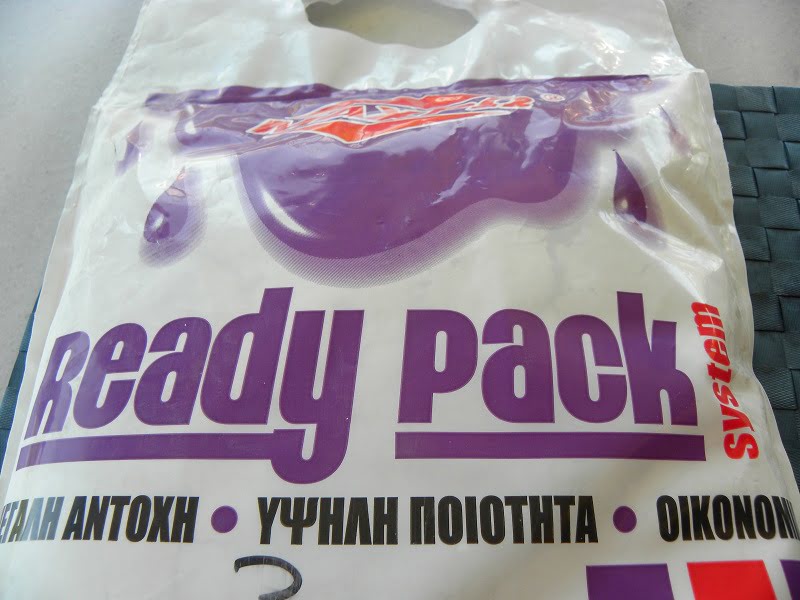 Attention:  Read the instructions on the package before using.

After soaking the fruit in this water, wash the fruit very well and proceed to make the preserve.

How to make fruit preserves

Fruit preserves can be found in almost  any Greek and Cypriot homes.

The method of preparation is essentially similar to that of making jams or marmalades, except that the fruit is usually unripe and firm, so that the pieces remain whole, whereas for jams we need ripe fruit.

They are made by slowly boiling fruit (or vegetables) in water and sugar over several hours or days, until the syrup sets.

A small quantity of lemon juice is always added at the end, in lieu of glucose syrup, to prevent the sugar from crystallizing again.

They can be served alone or used as ice cream toppings, in cakes, mixed with yogurt, on top of any cream dessert or in the Western way as a spread on toast for breakfast.

The syrup of the dessert is made either the traditional way or using a thermometre.

When the spoon sweet is ready, after cooling completely, we store in sterilized jars.  If set properly, no refrigeration is necessary and the preserve can last for many months.

If not set properly, some mildew may form on top or it may crystallize.  There is no necessity to throw the preserve away, as this can be fixed easily.

What to do with the leftover syrup

After eating the fruit preserve, there is always a lot of leftover syrup.  People, don’t know what to do with it and they usually throw this syrup away.

However, I don’t like wasting food and always make good use of it.

I am the first one to use leftover fruit preserve syrup to make other concoctions:

Use the leftover syrup to wet a sponge cake to make it softer but also to add aroma from the the fruit is was made from.

Liqueurs are usually made by steeping fruit in alcohol and then making a simple syrup to sweeten the liqueur.  It makes sense that using leftover syrup will add more flavour to the liqueur.

Puddings are made of milk, juice or water, sugar and a thickening agent (flour, corn flour (starch), rice flour, etc).

You can substitute part or all of the sugar by adding leftover syrup and adjusting the ratio of the thickening agent.

Usually for 1 cup liquid, I add 20 grams of flour or corn flour.

Some other ideas is using it in panna cota, mahalepi, yiaourtoglyko, ryzogalo, etc.

You can also add this syrup in homemade ice creams for more flavour and taste.

Instead of making syrup from scratch you can use leftover syrup to substitute the simple syrup used.

You can make some flavourful Iced tea by making regular tea or green tea, etc and sweetening and flavouring it with the syrup.

It is also a great addition in milkshakes, smoothies, etc., which adds flavour, sweetness and taste.

There are many methods of making the preserves, depending on the fruit, vegetable or nut.

Check out the recipes for more details. 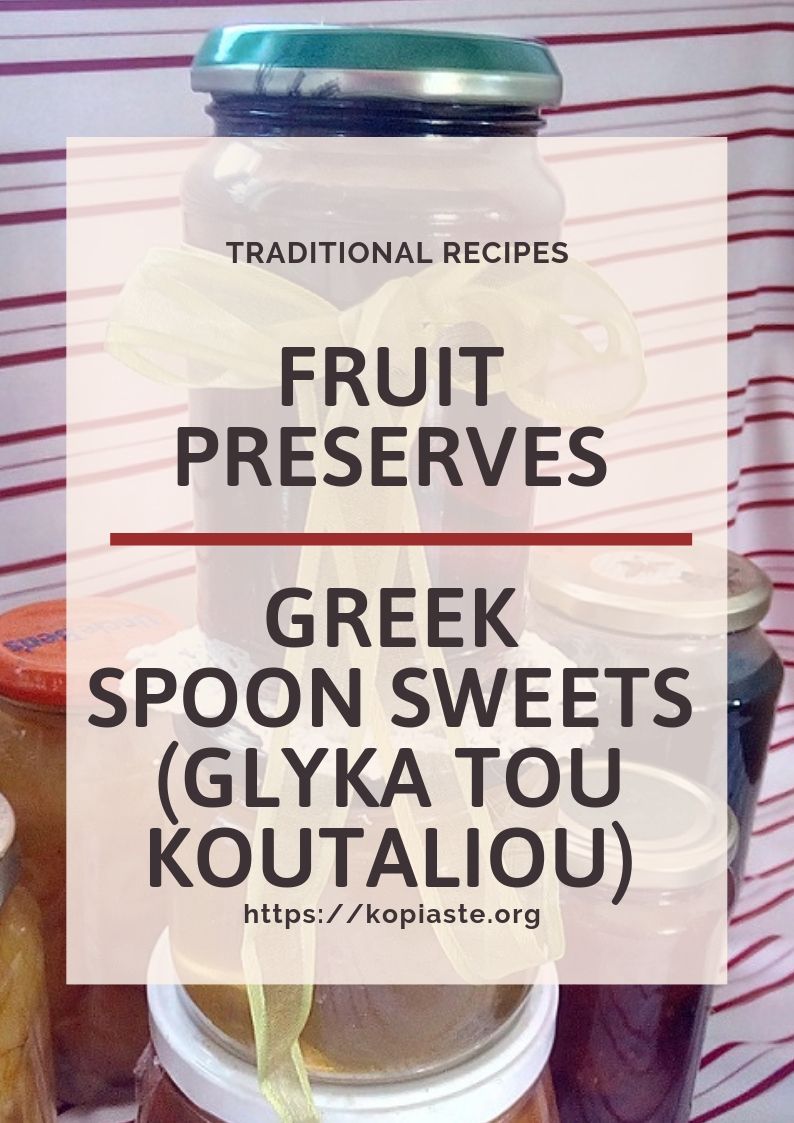 Perhaps you can help me! As an Air Force dependent child, we were stationed for 6 years at Iraklion Air Force Base on Crete.One of my fondest memories is of the thick white sticky spoon sweet we were given by our Greek friends..served always as a lump on a spoon served in a glass of water.It seemed to me to be a sort of confectioners sugar creation and I would love to know if there's a recipe I can make at home for my grandchildren.Feel free to email me or I'll check back here for an answer in future..thanks! Kim

Hi Kim, The confection you remember is called "Hypovryhion" (pronounced ipovrihion), which means submarine. Here is a link to a recipe by our well know chef Dina Nikolaou. I have translated the recipe for you and hope you can make it for your grandchildren. Ingredients: 1 kg sugar 1 cup (200 ml) water 2 tbsp corn syrup 1 vanilla pod or other flavoring of your choice Directions: In a nonstick pan heat up the sugar and water until the sugar melts. Continue to boil, skimming constantly, until the syrup thickens well. Add the glucose and the flavor of your choice. Remove from the heat immediately, stir and let the syrup cool down so much that you test it with your finger, it should feel lukewarm (but not hot). (My note: that would be around 110°F, if you have a candy thermometre). The mixture would still look transparent. Begin to stir with a wooden spatula or a wooden spoon. That would take some time and as you continue stirring, the mixture thickens and becomes opaque, as it cools. The color becomes off white (or light brown, if you flavor it with caramel). Stirring is a bit tedious as the mixture thickens, so alternatively you can do it by using a mixer, with the dough "hook" attached. Good luck, Ivy The deal in sterilized jars ** and close well.

What's the best way to store glyka, in the fridge or cupboard?

Hello Lisa. The best way to store glyka is in the cupboard, provided the syrup is properly thickened. They can be preserved for a very long period of time. If you have any doubts and your syrup is too watery the spoon sweet will get mildew, so it's better to store them in the refrigerator for a short time.

Actually, PG it's without their skins. When they are still fresh and green, the skin is peeled and when cooked it turns black.

What a wonderful post! I think you have used the walnuts with their skins, sin't it? Wow! Now I know a tiny bit more about Greek food. I always look forward to your posts :) The quince spoon sweets look wonderful too.