Spentzofai (pr. Spehn-tzoh-FAH-ee) or sometimes written spetzofai, without the “n”, is a Greek traditional recipe from Pelion, Thessaly.

The traditional recipe is made with local sausages and lots of peppers, especially a hot variety called spentzes, a local variety from Pelion, from which the dish takes its name.

The sausages and peppers are cooked in a sauce by adding onions,  tomatoes, wine and just salt and pepper because most of the taste of this dish comes from the spices in the sausages.

After making Spentzofai many times, I have made my own twists to the traditional recipe, so today you will find two different recipes, one made almost the traditional way and the second using my homemade spicy sauce, which made the procedure much easier.

In the second recipe I did not have any hot peppers. so I added bell peppers and to give it a kick, I added a pinch of harissa.    Feta is added, optionally.

Note:  More recipes added at the end of the post.

Smelly in a good sense, referring to the smell (tsikna) of the smoke coming , from the charred meat, which fills the atmosphere from everywhere on that day, as it is a tradition to grill or fry meet.

Pempti means fifth as it is the fifth day of the week.

Furthermore, Tsiknopempti is  during the carnival period so it’s one more reason for people to celebrate before the 48 days of fasting during Lent.

On this day the municipalities organize outdoor barbecues and grills in central squares while the municipal bands play happy carnival music and people have fun.

At least this was the situation until the economic crisis hit us!

This year the situation  is tragic in Greece.

The same arrangements were made this year as well.

Varvakeios, the central  market of Athens, in collaboration with the meat vendors and the municipality of Athens, organized outdoor grills by offering almost 1.5 tons of meat (chicken, sausages, pork, lamb etc) as well as 200 kilos of wine and the band was there trying to cheer up people.

However, all you could see were endless queues of people of all ages waiting patiently with grimmed faces to fill their tummies.

Not only pensioners, who’ve seen their already scant pensions reduced to 300 – 400 Euros a month but also younger unemployed people, who are desperate to find a job and families who cannot cope with one reduced salary and meat is now  a luxury for their survival.

You may see pictures here. This is Greek reality today.

The majority of the  Greek people, have been affected by the economic crisis, one way or the other.

We are still among  the fortunate who still have food to eat but don’t let this mislead you because we are also making lots of other sacrifices to cope with less money and increased bills to pay.

We did not go out as is the tradition but I prepared a few things for a family gathering at home.    I prepared Spentzofai as well as some Pizzas.

In my recipe I used some spicy sausages and my Homemade Spicy Tomato Sauce, which I also used both in Spetzofai as well as in the pizza.

Having made the sauce several days earlier, made the procedure much easier for both recipes.

Before going to the recipes, here are a couple more ways I used my spicy sauce. If you want something different for an easy dinner, make Pizza Sandwiches:

Fully open one bun per person and place some sauce on both sides.  Add some slices of tomato, on which sprinkle some oregano. Then, put a few slices of lountza or other smoked pork and a few slices on halloumi on top.

Finally, top it with shredded mozzarella. Repeat exactly the same with the remaining buns.  Preheat oven to 180o C and bake until mozzarella melts, about 10 minutes.

Sandwich both pieces and enjoy!

Spetzofai with Eggplants and Bacon

Note:  Leftover can be eaten the next day cold, as a mezes, or it makes a delicious pizza.  The only ingredient you need to add is some cheese on top.

Τhe  second recipe is much easier as I used my spicy sauce and except for sausages and peppers, I have also added some mushrooms and feta. 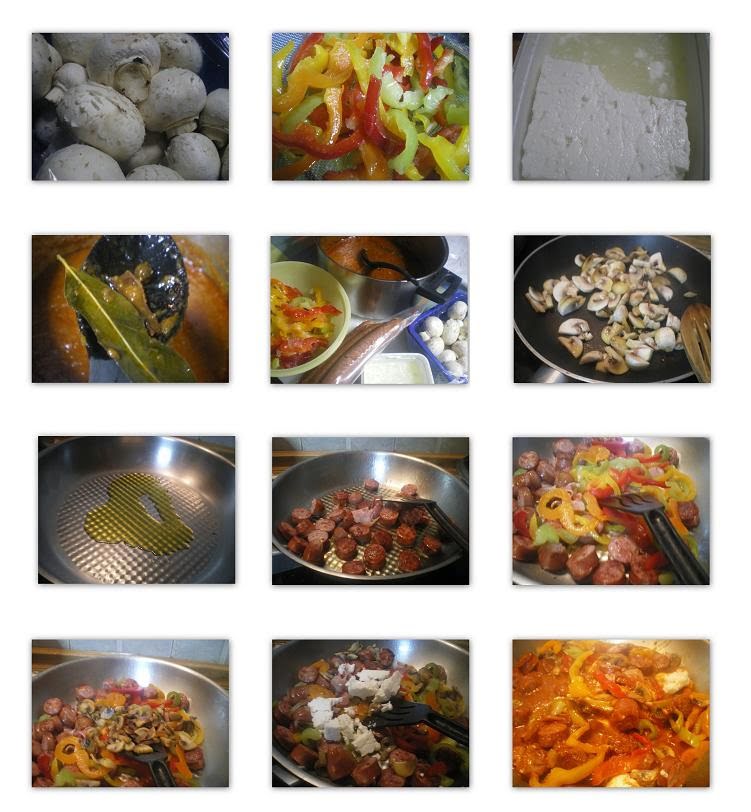 Sauté some mushrooms which add at the end.

Cook fussili al dente and mix in the leftover spentzofai and you will have the most amazing pasta dish.

I have also made this dish with ditali pasta.

Here are a few more ideas how to use spentzofai:

Turn your leftover Spentzofai into a risotto.

Note:  Leftover can be eaten the next day cold, as a mezes, or it makes a delicious pizza.  The only ingredient you need to add is some cheese on top.

QUICK GLUTEN-FREE RECIPES TO COOK IN UNDER 30 MINUTES -

Quick Gluten-Free Recipes to Cook in Under 30 Minutes

Looks like a fantastic dish, I'll give it a go and let you know how it turns out :)

Thanks for the recipe. I will be cooking for my family tonight..