Kokoretsi is a traditional Greek dish made mainly, but not only, during Easter, consisting mainly of seasoned pieces of lamb or goat offal (sweetbread, hearts, lungs, or kidneys), skewered on a spit and wrapped  with lamb or goat caul fat and intestines and grilled together with the lamb.

To make kokoretsi the most difficult part of the process is to wash the bowels (intestines) of the lamb.

This is a time consuming procedure which is advisable to be made a day before roasting it.

The bowels, which are from a small lamb, should be washed thoroughly inside-out. They are then washed and put in a bowl of water with either vinegar or lemon juice, they are washed again and turned around and washed for a second time.

To wash the intestines inside, take a knitting needle, put one end, after folding the tip and push it through, until this end comes out from the other side.  After washing them well with vinegar or lemon juice,  wash them  again with plenty of water and turn them over again.

When turning them over, surely some of them break.  Use these smaller pieces to make magiritsa.

Ovelias – Lamb on the spit 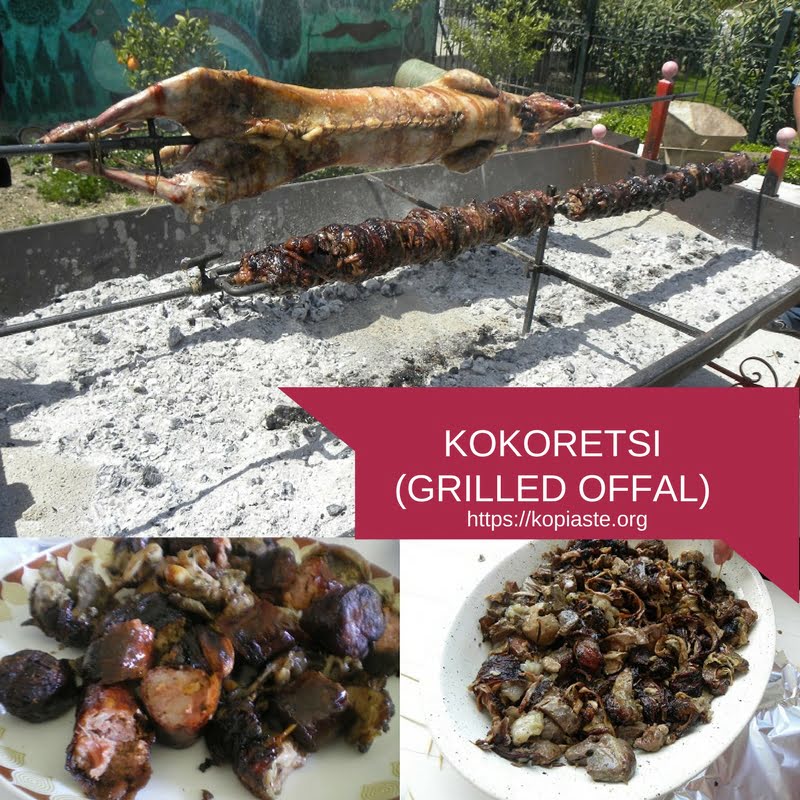 Nuria, do you remember when I commented on one of your recipes. I told you wait and see what I have to post about. But be sure it's very tasty so long as it is homemade and washed a thousand times.

Happy Easter Ivy! YOu've been working hard!!! It's shocking for me to see how you prepare the kokoretsi yourself! I see that you also use all these innner parts of the animals :D

Lulu, I think the secret for not being tough is to wrap it in caul fat before wrapping it with the bowels.

Thanks everyone for dropping by and your lovely comments as always.

I love correctly-made kokoretsi, and is one of the things I most miss about not being in Greece for Easter. Χριστός Ανέστη!

Hi Ivy, your lamb on a spit looks impressive. I am a little queasy about most offal though, having not tried it.