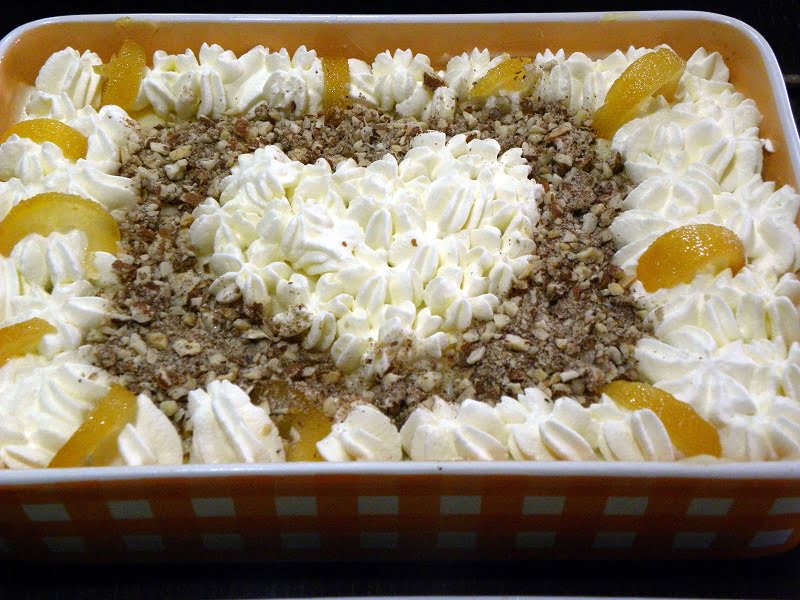 Today is my mum’s memorial day, she died 15 years ago but it also coincides with my brother’s memorial as it is six months since he left us, so it’s a very emotional day for me but so long as we remember them, they will always stay alive.   May they both RIP.

Subconsciously I chose this recipe to post today as my mum loved making spoon sweets (fruit preserves) and she always added some on the puddings she made. 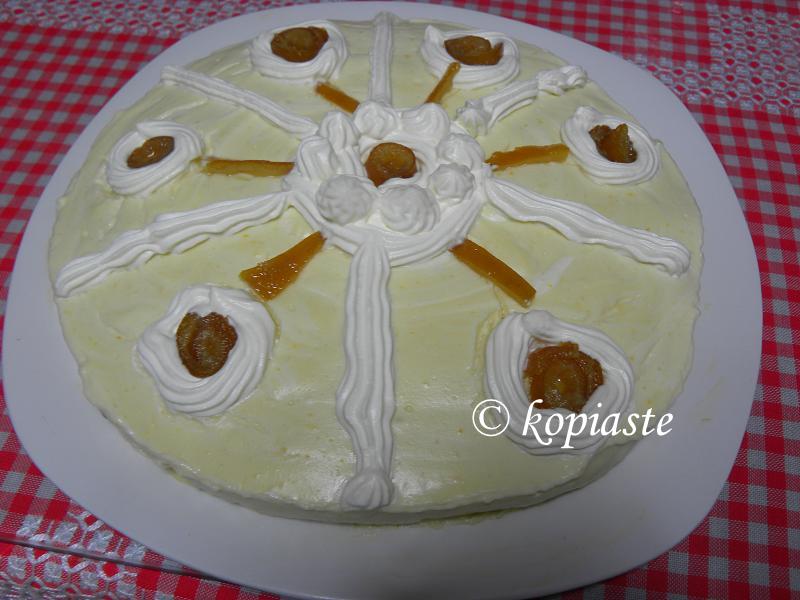 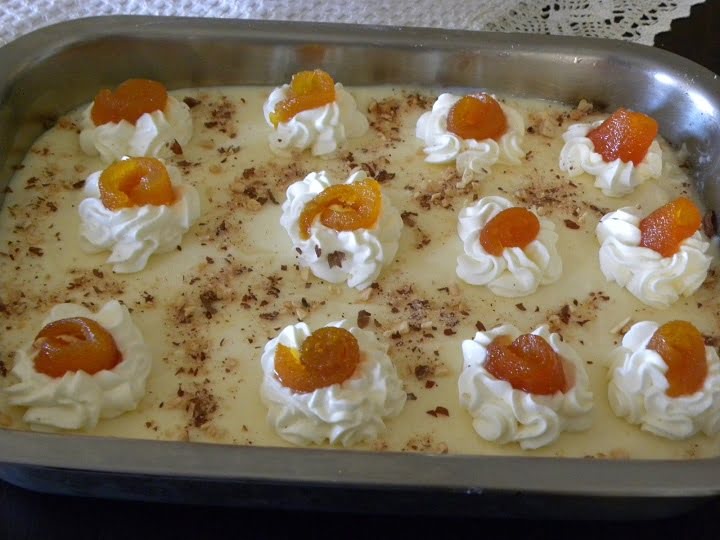 I had heard of Ekmek before but I hadn’t eaten it before and was under the impression that it was a usual kataifi recipe, made flat with cream on top and served with kaimaki ice cream.

For those of you who don’t know what kataifi is, it is shredded phyllo.

In Athens, there are still some family workshops, where you can buy fresh kataifi, but you can also buy it frozen in supermarkets. 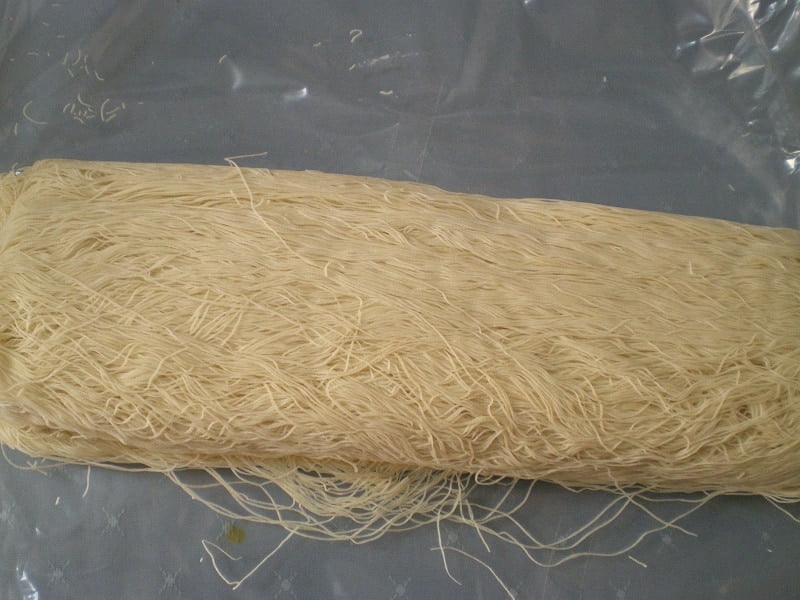 The strands of kataifi are pressed to each other, when packed,  so before making the dessert, you have to fluff it up by just pulling the strands.

Like other kinds of phyllo, if exposed to air for a long time, it will dry out, so when preparing it keep it covered with a napkin or cling film. 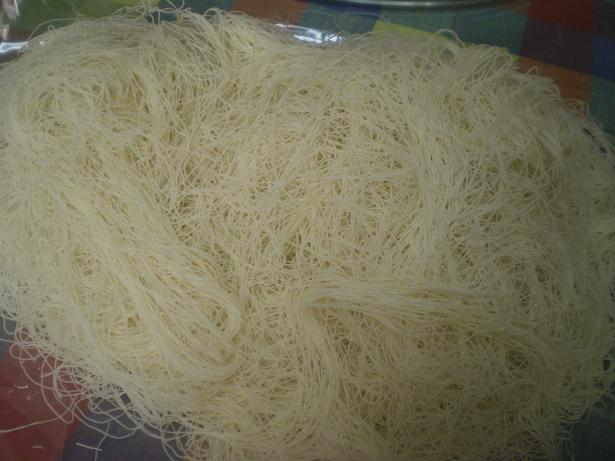 See how they make kataifi in the video that follows:

The classic recipe for Kataifi is a roll, filled with nuts and bathed in a sugar syrup. 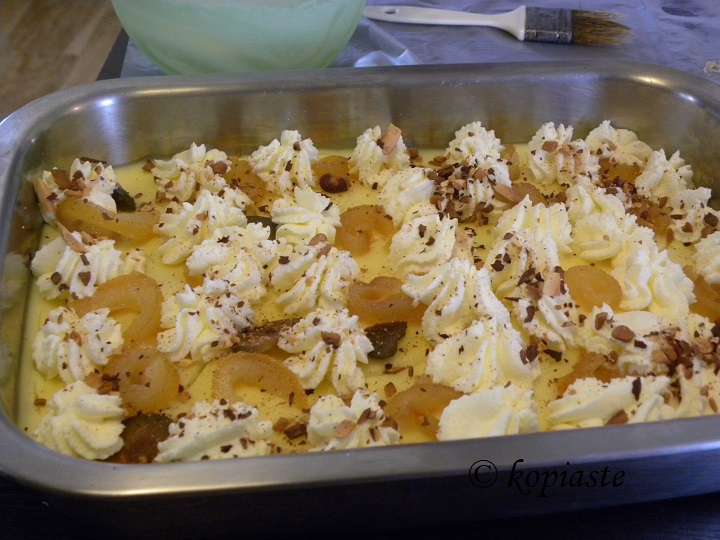 Using Leftovers to save money

The kataifi I had was not enough to make the classic recipe, so I used the leftover to make this dessert.

I just layered half of  it on a baking tin, added the nuts and the remaining on top and then baked it.

I didn’t bother to make a sugar syrup because I love making spoon sweets and have never wasted a drop of that delicious leftover syrup.

In fact, I always make more than is needed to preserve the fruit, so that I can make use of it in recipes, as it is far better than making a quick syrup.

However, it is very easy to make some simple syrup from scratch, which I have included in the recipe. 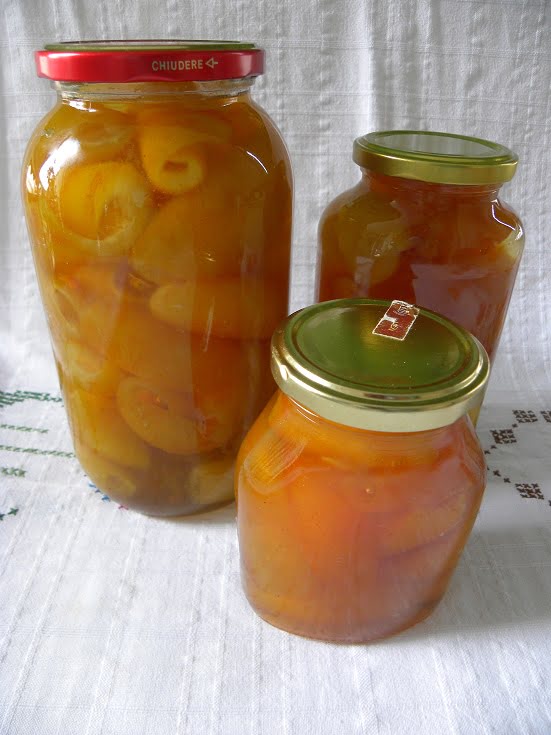 This time of the year I usually make citrus spoon sweets which are called “glyka tou koutaliou” in Greek.  Last year I had made a Seville orange spoon sweet and this year I made this preserve twice.

Before Christmas I made it with oranges, bitter oranges and lemons and just a few days ago, I made more, this time using bergamots as well.

I have added a few recipes using leftover syrup in my cookbook but I always give the recipe for the syrup if you want to make it from scratch. 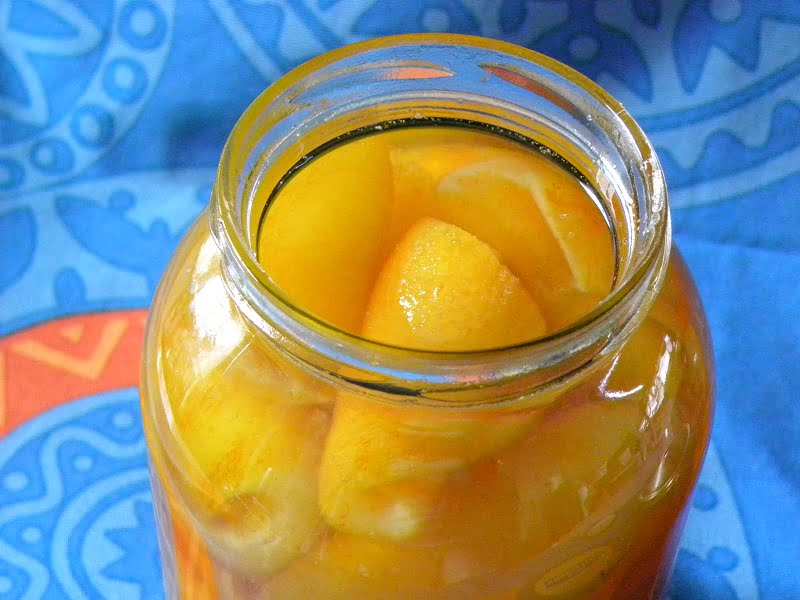 I wonder how many times I have used the word leftover in this recipe.

Nothing is wasted, so when making the spoon sweet, the zest is collected in ice cubes and frozen to be used in desserts, like this one. 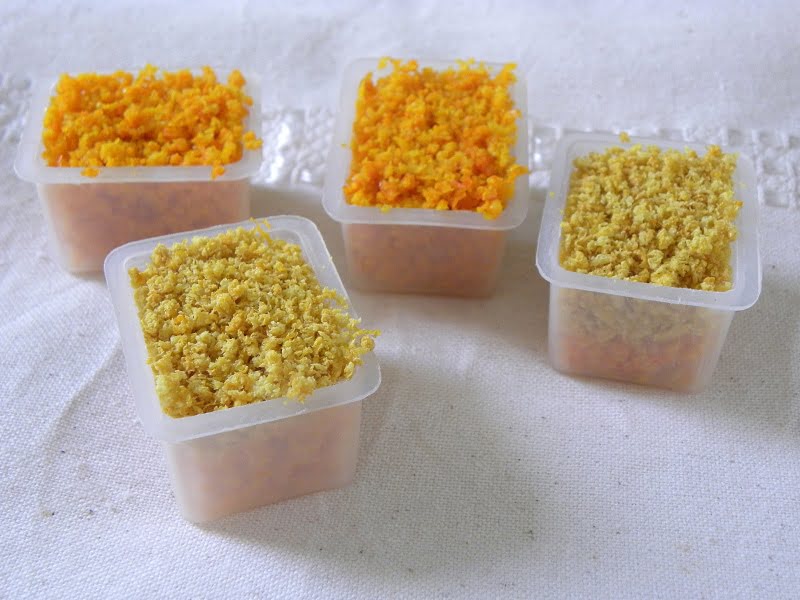 On top of the baked kataifi, I added the orange pastry cream mixed with whipped cream, which is very light and aromatic.

It is similar to the cream I had made to fill the puff pastry horns, and when it set I decorated it with the remaining whipped cream, some almonds and orange spoon sweet.

There are no words to describe this delicious, aromatic, fruity dessert, which is so light and delicious.

It turned out very light, smooth and rich without being very sweet. 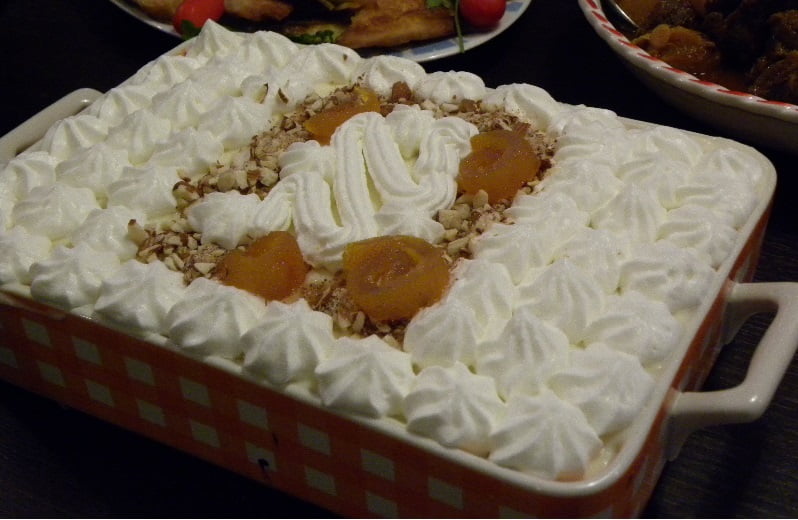 My mother used to make a lot of crochets. Although they are now old fashioned and do not use them any more, I like using them in my pictures. 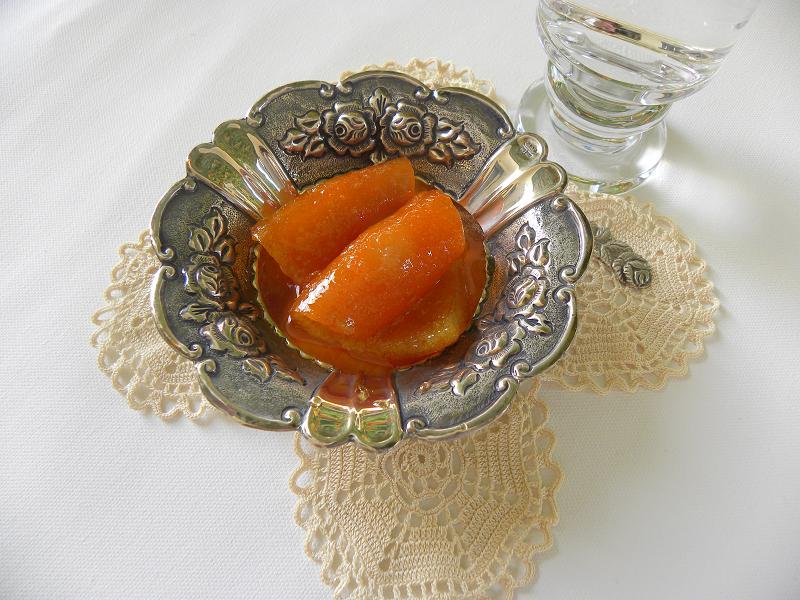 Yesterday I  had some leftover kataifi again, which was enough to make a small Pyrex of this Ekmek dessert. 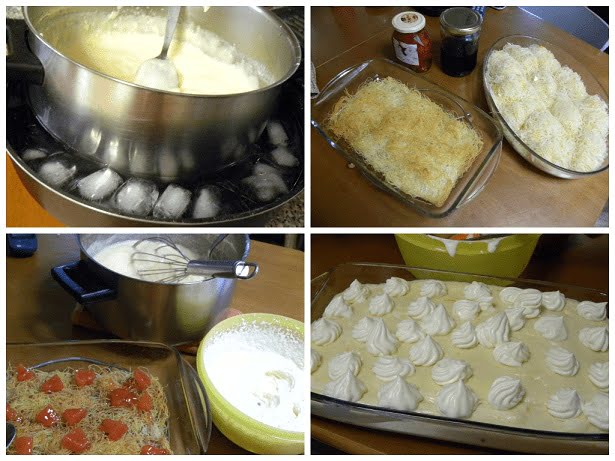 This time instead of using orange preserve, I used quince.  On top of the baked kataifi I added some quince syrup as well as a layer of quince preserve.  Then I added the pudding and when serving we added some additional quince preserve on top. 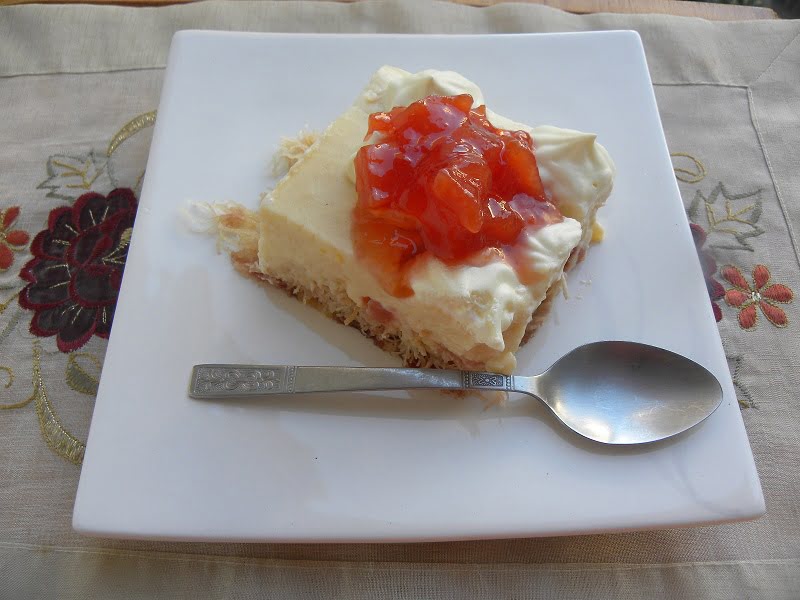 I have made this recipe so many times since then, that I have update the post with many recent photos and a video.

I have kept the original photo of this dessert as a memento on top.

Recently, I made some Limoncello, Lemon Preserve (same as bergamot) and Lemon Curd.

I mixed some of the Lemon Curd in the pastry cream and decorated the Ekmek with some lemon preserve.

You will find the new recipe at the end of the post. 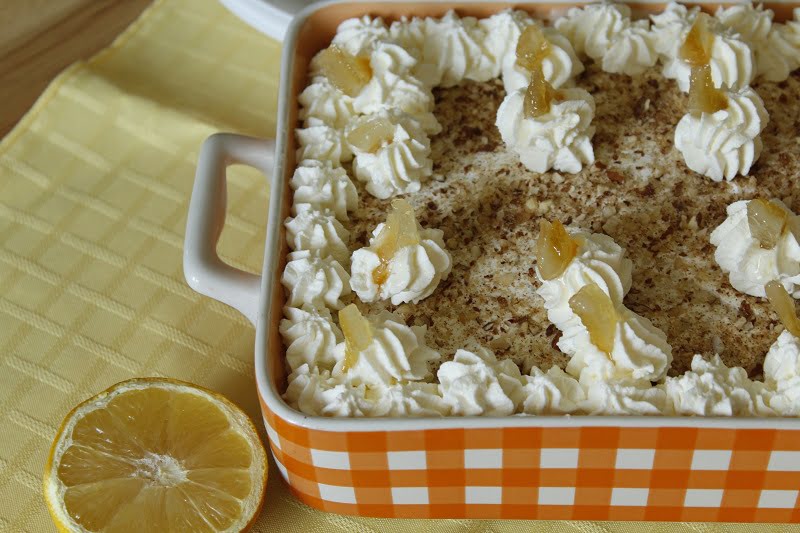 For the pastry cream:

or if you are making it from scratch: 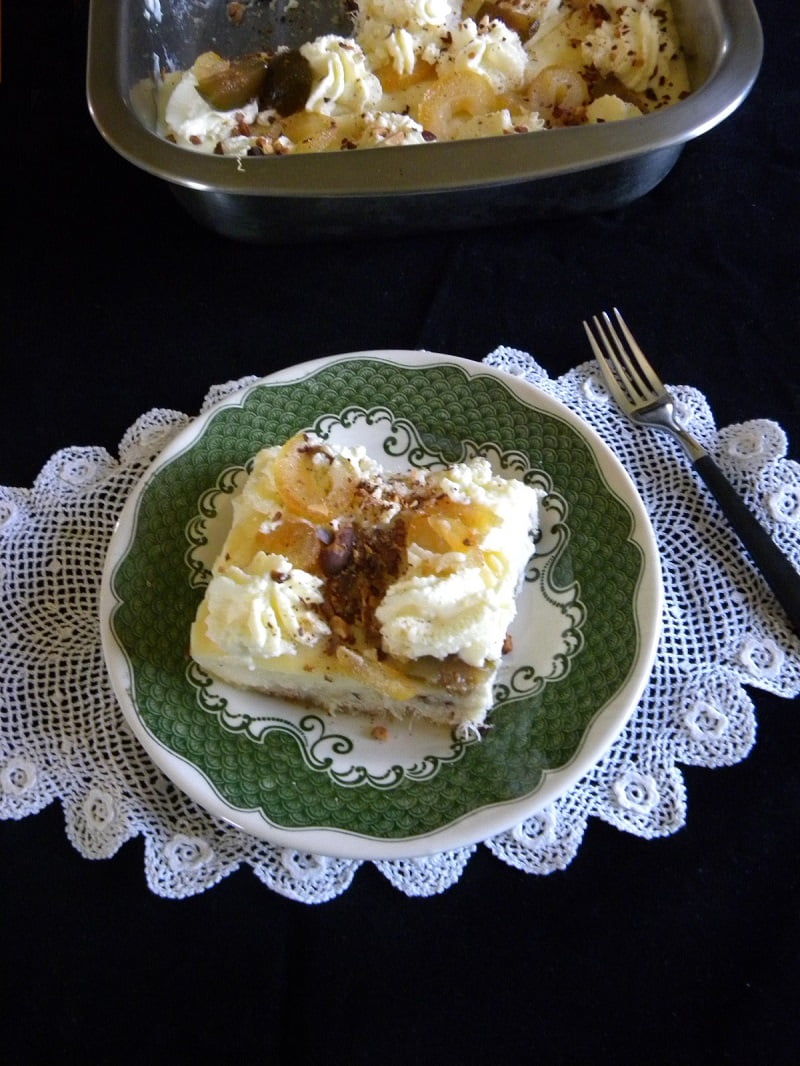 2.     Put all the ingredients in a small pot. Mix to dissolve sugar and bring to a boil. Reduce heat and simmer for 5 minutes. Add the lemon juice and mix.  Set aside to cool and discard the cinnamon and cloves.

3.      Heat the butter in a small pan or frying pan, over low heat until it melts. The butter will separate in three parts, foam, oil and milk solids. Let it cool for a while, and skim off the foam with a spoon. You can pass it from a fine mesh.

7.     Take out from the oven and drizzle with the syrup. Set aside to cool.

9.     In another pot add the corn flour (starch), eggs, sugar, vanilla, zest and the cold milk and stir well with an egg beater, until the mixture is combined.

10. Pour the hot milk to the mixture stirring constantly, on the heat, until cream sets.

11. Remove from the heat and set aside to cool.  Cover with cling film or mix it every now and then so that no crust is formed on top.

13. Beat the cream on low speed, add the sugar and vanilla, mix and increase the speed as the cream starts to set. Refrigerate until the pastry cream cools.

14. When the cream has cooled spread it over the kataifi.

15. Add a thin layer of whipped cream on top of the pastry cream and pipe the remaining using a star shaped nozzle.  .

16. Decorate with the leftover almonds and Lemon fruit preserve.

17. Refrigerate for a few hours before serving. 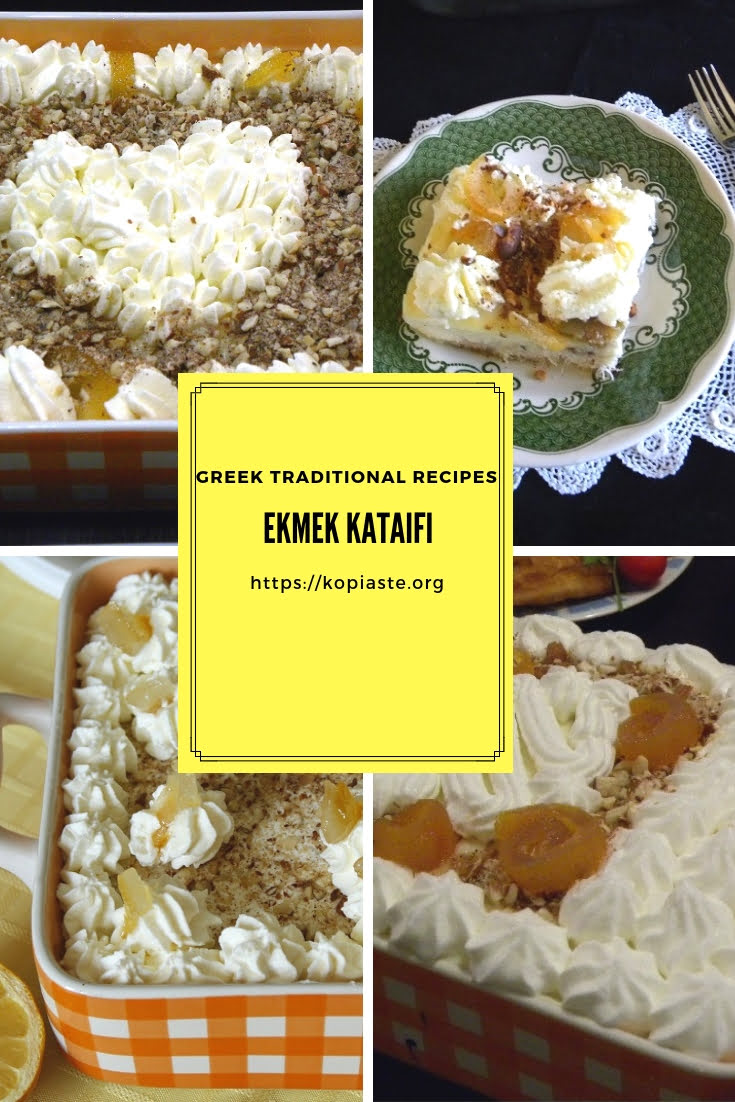