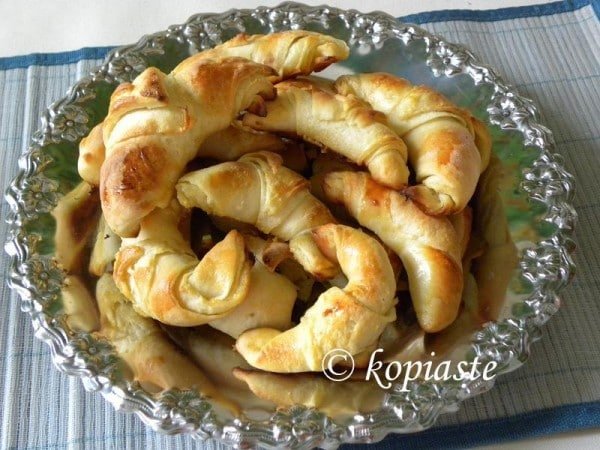 I think that you will agree with me that there isn’t any one who will say that they do not love croissants, especially if they are home made.

I used to think that it was impossible to make them but I challeged myself and after a couple of attempts and watching a few tutorials on You-Tube I finally succeeded to make some.

Before going to the recipe let me share with you some information I read about these flaky, buttery bread.  I am sure that most of you think that croissants are French pastry  however there are several different stories.  During the middle ages in Austria in 1683 they used to make crescent shaped bread as a worship to the moon.   It is believed that croissants were made for the first time in Vienna after the defeat of the Turks who tried to siege the city.  In order to celebrate, the bakers shaped the kipferl bread into crescent shape, same as the symbol on the turkish flag.     According to others, Marie Antoinette, who was Austrian, introduced them to the French in 1686 and finally according to others an Austrian artillery officer named August Zang, founded a Viennese Bakery, in Paris, around 1838 – 9, where the croissant was born.

Whichever the truth is, we all love these delicious bread, especially the children.

Croissant pastry is similar to puff pastry with the only difference that yeast is added to the dough. 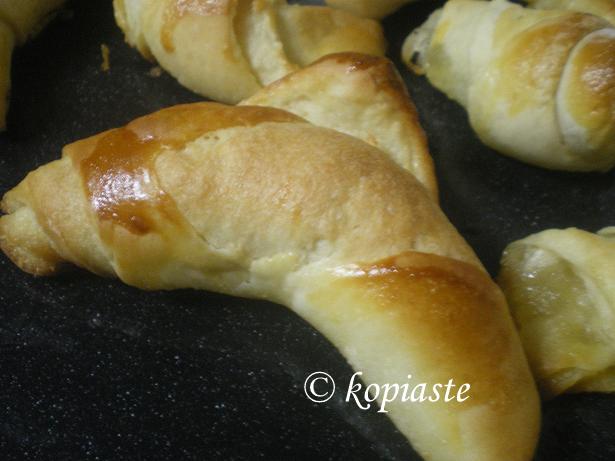 Making croissants is not a  very easy task and it is  time consuming, considering that it is a two day procedure but it is worth the effort.

You can leave them plain or add some filling if you like.   I filled mine with couverture chocolate, some with nutella, but my favourite were with homemade apple jam. 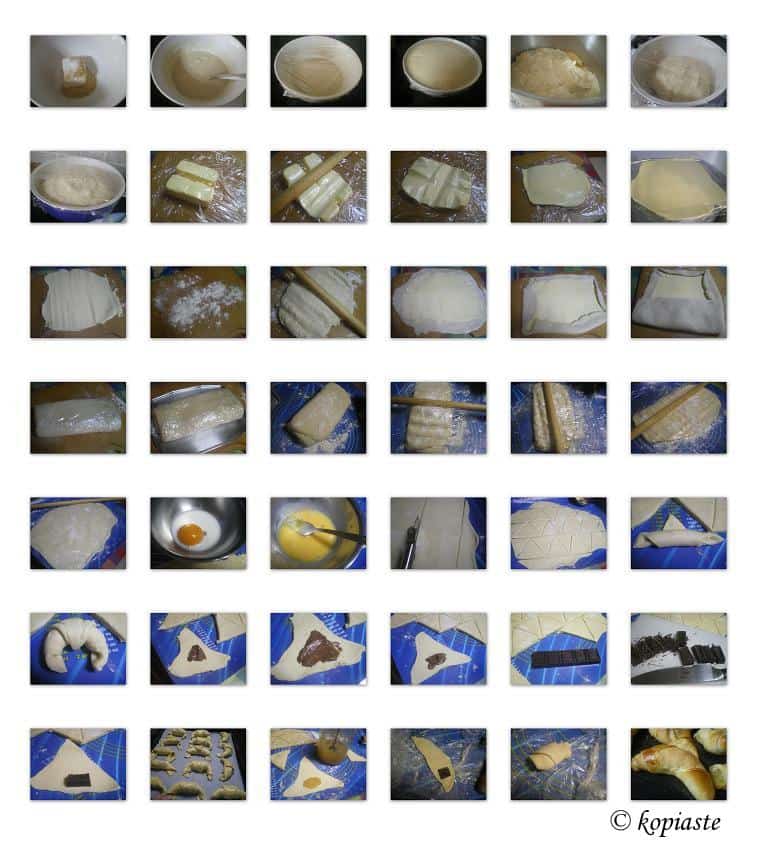 Makes:  about 30 croissants (depending on size)

some extra flour, to flour your working surface

In a bowl add the fresh yeast, 1 tbsp sugar, salt and 2 tablespoons flour and dissolve the yeast with 1/8 cup lukewarm water or milk.  Mix to combine and cover the bowl with cling film and a kitchen towel and set aside to bubble and double in size.

Cover with cling film and a towel and set aside until it doubles in volume.

Place the butter between two sheets of cling film and with the rolling pin, pound it to flatten it as much as you can and then roll it as thin as you can.  Place it on a tray and refrigerate.

Divide the dough in two parts. (I only used half of it so you may make half quantity of dough or use double amount of butter).

Flour your working surface or use a silicone mat.  Roll out the dough into a rectangular which should be bigger than the butter.  Remove the first piece of cling film from the butter and invert it on the dough, leaving about an inch on each side.   Fold the sides and then fold the dough into three plies.

Wrap the dough with cling film and refrigerate until the next day.

To make the croissants, place the chilled dough on a lightly floured surface.   Cover it again with cling film and pound it lightly horizontally and vertically until it becomes double in size and then work with your rolling pin to make the dough as thin as you can (about ½ cm).

Using a sharp knife of a pizza wheel, cut stripes of 10 cm (4 inches) width and from each stripe cut triangles, every  7.5 cm (3 inches).

Place each triangle between cling film and using the rolling pin, make each piece even thinner.  On the wide side add any filling you like and roll.  Take the two edges and curve them towards the centre to form a crescent.

Place on a baking tin lined with parchment paper and allow for 30 minutes to rise.

Brush with the egg wash and bake for  12 -15 minutes or until golden brown. Keep an eye on them in the oven as these can brown quickly. 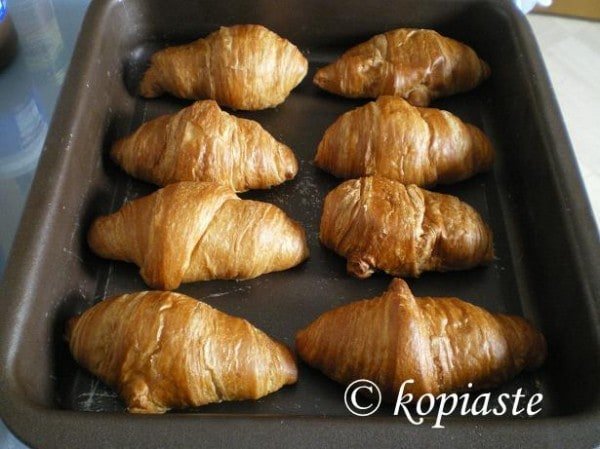 Great post. If I'm not mistaken this lovely delight is originally from France. You're croissants look delicious.

agree with others! Your croissants look perfect!

Ivy...your homemade croissants look great....light and fluffy :-) The step-by-step pictures are awesome. Have a great week ahead!

Wow, Ivy! Great job on the croissants. Thanks for the history as well. I didn't know they orginally came from Austria. My kids and I LOVE croissants but I have never made them. I usually buy them at the bakery. We love to eat them with jam (esp. apricot), or of course, with nutella. :-) Thanks for sharing your recipe! My recent post The End of a Foodie Era