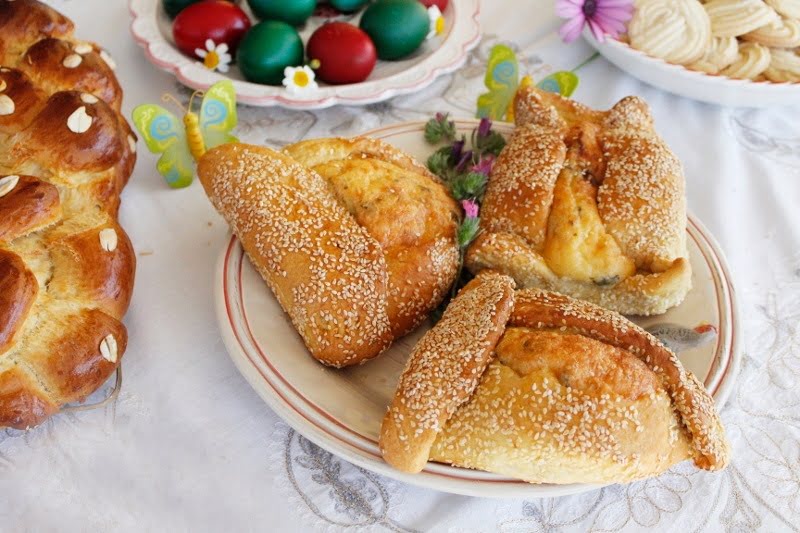 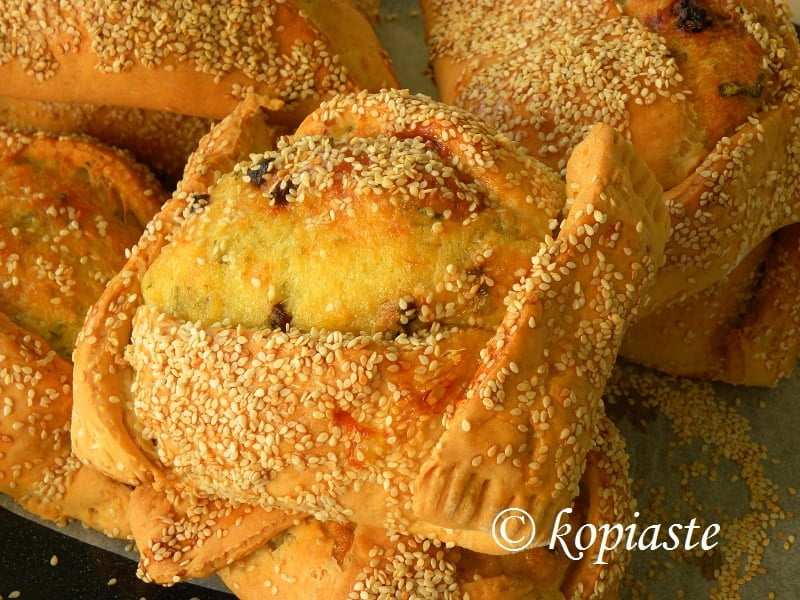 In the older years, people were more faithful, so milk and eggs were not consumed during the 48 days of fasting. What could they do with the milk? Cheese was a solution. What about the eggs, since they did not have refrigerators? They had ways of preserving eggs for a long time and one method was keeping them in baskets among wheat straw, in a cool place.

Having lots of cheese and leftover eggs seemed like a great way to use them and make flaounes. This is just a thought of mine but it makes sense!

Outside Cyprus, this cheese can be substituted by a mixture of other Cypriot cheeses such as halloumi or kaskavalli or the Greek cheeses ladotyri Mytilinis, graviera, kefalograviera and some kefalotyri.

Kefalotyri is usually very salty, so don’t add too much.

The dough itself is so delicious that we always make more, in which we mix the left over pieces of grated cheese in order to make a cheese bread called “tyropita”.  The same dough is also used to make koulouria, which is a very aromatic bread.

Small flaounes (around 9 cm – 3 inches), called flaounitses or flaounoudes, are made in a triangle shape, year round with the basic dough recipe and grated halloumi, eggs and mint, as filling.  These are served as snacks or finger food at parties. 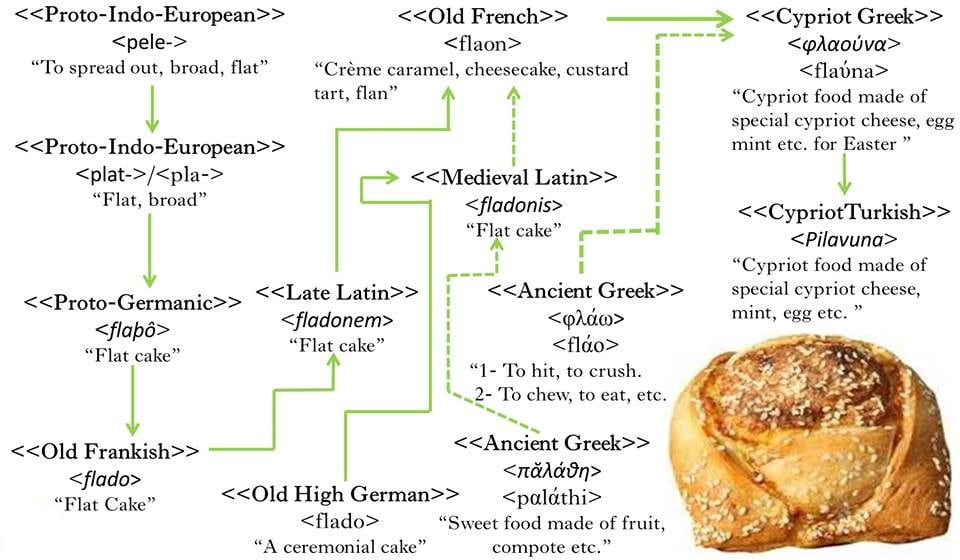 This bread was offered to children , who went from house to house singing about the coming of swallows and spring.  This tradition continued during the Byzantine era and until recent years, flaouna was offered to children or even grown-ups, as a treat when they went from house to house to announce the resurrection of Christ or to wake up the people to go to church for the midnight mass on Easter Saturday.

Traditionally flaounes are made on Holy Thursday and it’s not an easy job.

These cheese breads are made with a very flavourful bread dough and filled with a cheese called “Paphitiko” made, during the Easter period, of 100% goat’s and ewes’ milk, especially for flaounes. 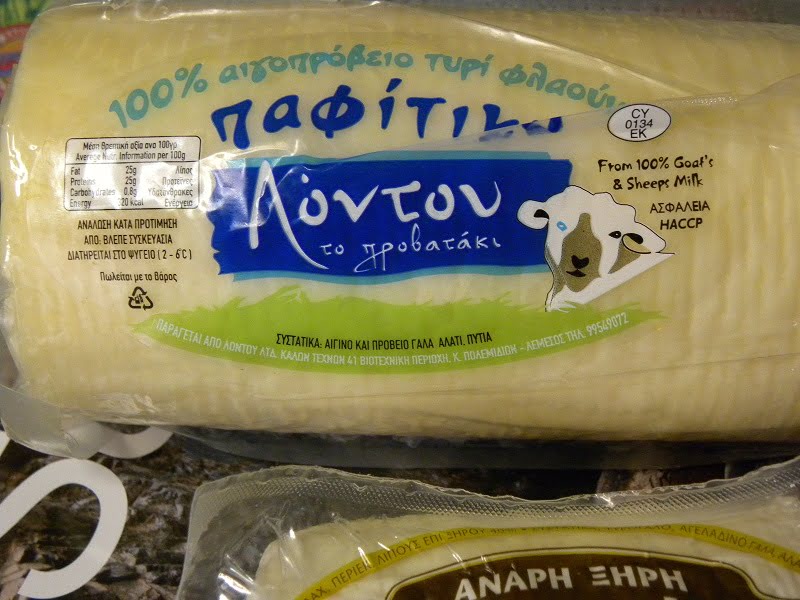 However, this cheese can be substituted by a mixture of other Cypriot cheeses such as halloumi or kaskavalli or the Greek cheeses ladotyri Mytilinis, graviera, kefalograviera and some kefalotyri.  Kefalotyri is usually very salty, so don’t add too much.   In some countries where these cheese are difficult to find, add only halloumi or a mixture of halloumi with mild cheddar or romano.

As the dough of flaounes is very unique and aromatic, we usually make more dough than necessary to make some “koulouria”, (bread dough in various shapes). 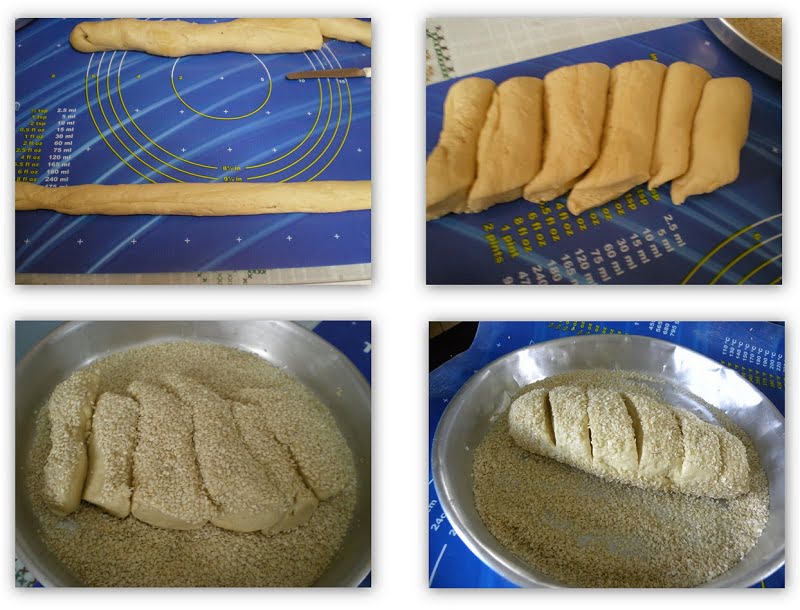 The preparations usually start from the previous day by making the filling.  The cheese is grated and eggs and spices and mint are add to the mixture.  The filling is covered and refrigerated overnight in order to rise.  The next morning, the filling is “awaken”.  This expression means that more eggs are added, to make the filling fluffy again.

If the filling is prepared on the same day, it should rest at room temperature, covered with a kitchen towel for a few hours to rise.

On Thursday morning, most of the female members of the family (grandmother, mother, daughter, aunts etc.,) get up from the crack to dawn to start preparing the flaounes as well as bread or “koulouria”,  as well as to dye the Easter eggs.   Tsourekia were introduced to Cypriot cuisine much later.

Each member has its role.  One rolls out the dough, another puts the dough in the sesame seeds, another adds the filling and shapes them and some one places them neatly between clean bed sheets, with a blanket on top to help them rise.

After they rise, the egg wash is added on top, they are placed in big baking trays and off they go to the bakery. 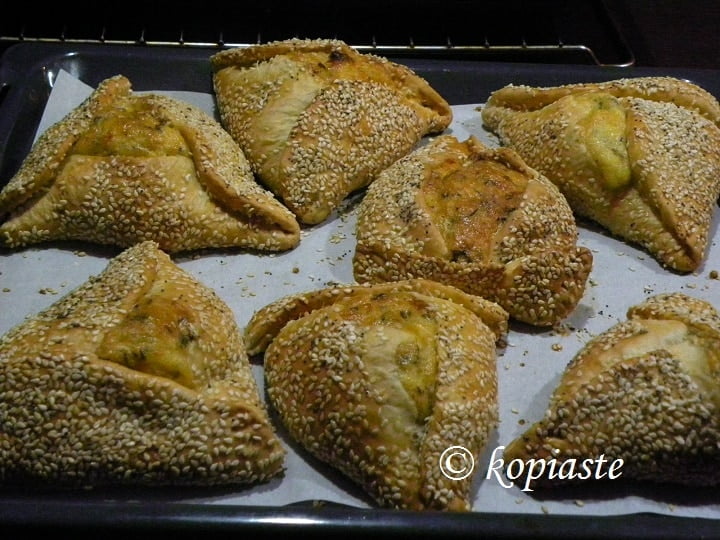 I have memories when I was young when we all used to help making them and then we had to take them to our neighbourhood’s “fourno” which was a traditional bread bakery with wood oven and we had to wait patiently for our turn to have ours baked. 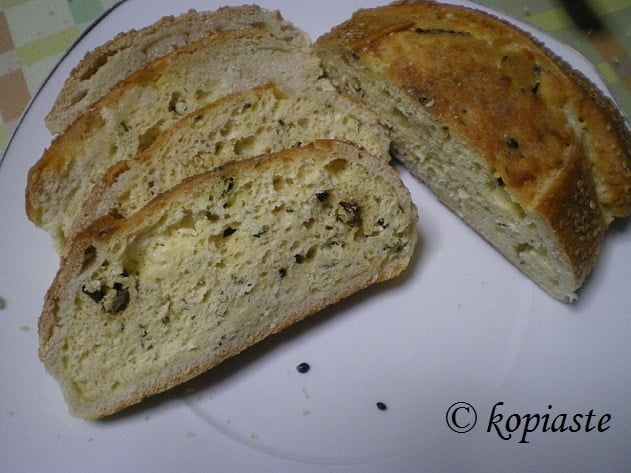 I have just finished the procedure of making them and I made 12 medium-sized flaounes with the quantity of flour used and there was some left to make two koulouria. 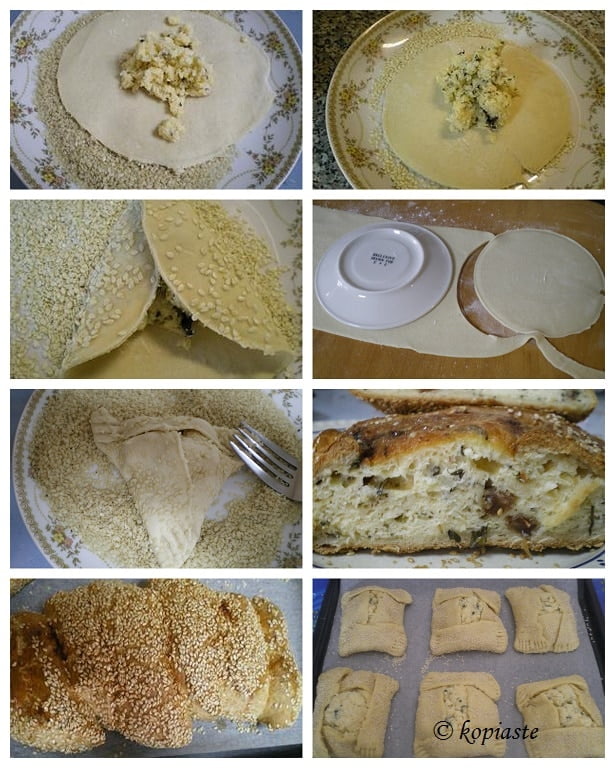 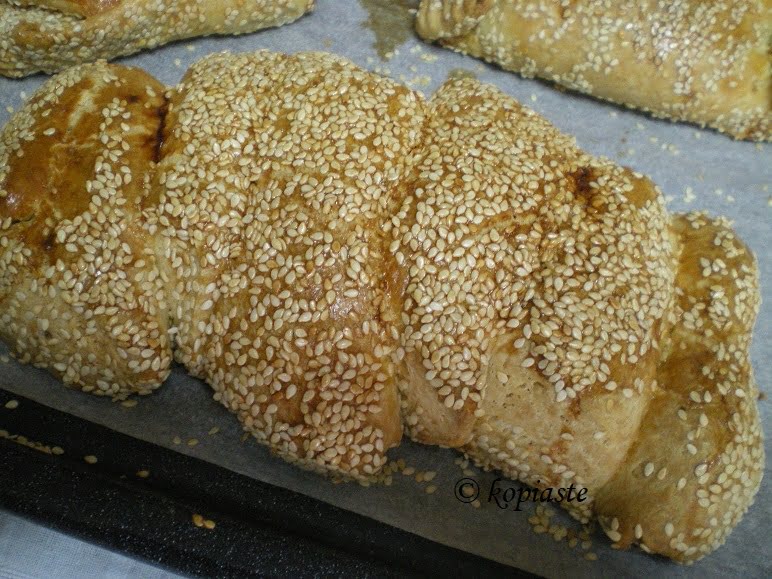 For the egg wash:

1) In some parts of Cyprus, especially in the region of Larnaca, sugar is added to the cheese mixture. Also, apart from the usual spices and herbs used in the filling, some people, incuding my elder sister also adds some "kanaouri" (hemp seeds} in the filling.

2) Instead of fresh yeast, dry yeast may be used (about 12 grams - 0.42 oz per kilo (2.20 lbs) of flour, dissolved in lukewarm milk and a few tbsp of flour and a teaspoon of sugar).  Be careful with fresh yeast as it may not dissolve properly. Pass it from a small sieve.

4) As I cannot find spry in Greece or other shortening, I substitute it with olive oil.

5) If you have leftover dough and pieces of cheese, cut the cheese into smaller pieces and mix them with the dough and form them into a bread called Tyropita or Halloumopita.

6) If you want to make koulouria with the remaining dough take a large piece and roll with your hands to make a long cord about 3 cm in diameter and about 50 cm long. Cut it diagonally with a knife in equal parts about 7 - 8 cm each and place each piece next to the other and join them together.

Cover cheese bread or koulouria with sesame seeds and leave them to rise, (same way as flaounes) then brush them with egg wash. Bake in a preheated oven, to 180o C / 350o F, until golden brown. 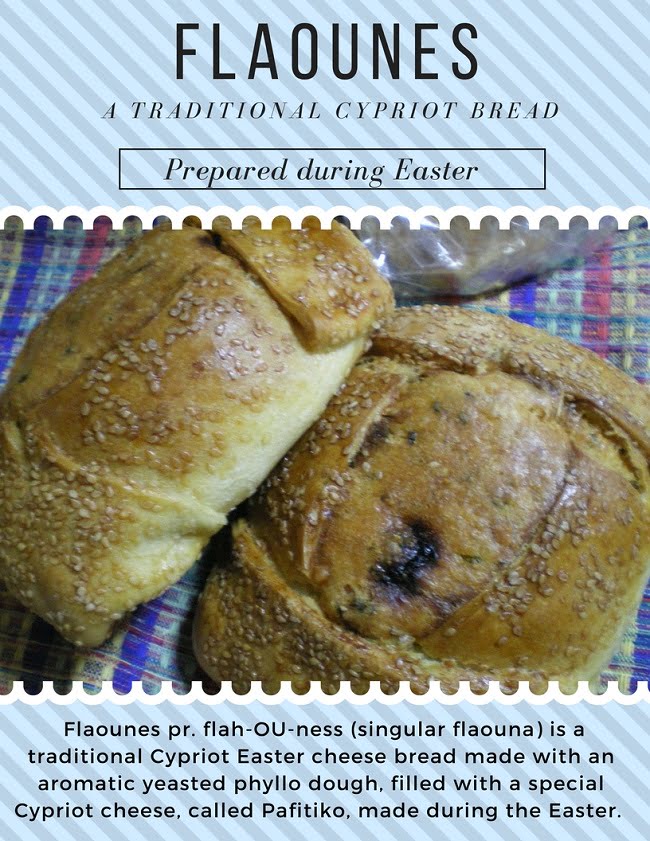 This and many more traditional Cypriot recipes are included in my cookbook Mint, Cinnamon & Blossom Water, Flavours of Cyprus, Kopiaste as well as in Volume 2 of my e-cookbook.