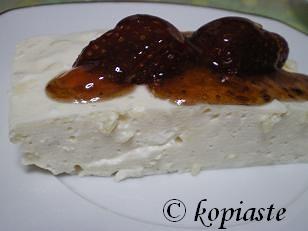 I based this dessert, on a cream my mother used to make in Cyprus called Paris on Ice, which was flavoured with masticha (mastic resin). For those of you who are not familiar with the mastic resin, it is an evergreen shrub or small tree of the Pistacio family growing up to 4 m (13 ft) tall, which is cultivated for its aromatic resin on the Greek island of Chios. The word mastic derives from the Greek verb mastichein (“to gnash the teeth”, origin of the English word masticate) or massein (“to chew”).  You may read more about masticha here.

Within the European Union, Mastic spice production in Chios is granted protected designation of origin (PDO) and a protected geographical indication (PGI) name.

Back to the recipe. The only thing I remembered about the recipe was that it was made with evaporated milk, gelatine and almonds and it was flavoured with masticha.   The name is a bit strange and have no idea why it was named Paris on Ice.   I presume the word ice was used because it is refrigerated and because the cream is white.

I tried to find the recipe but unfortunately I had no luck in a google search. I decided to recreate it on what I remembered and half way through, although this cream brought back nice memories as my mum used to make it.  When the cream set she used to make a strawberry or cherry jelly and put it on top until the jelly would set as well.

We used to love this dessert when we were kids so I recreated my own recipe and giving it my own twist and I must admit it did remind me of that dessert but the addition of whipped cream, mixed with yoghurt and whipping the cream twice, gave it the airy feeling of a mousse.

Note:  This dessert is characterized by the flavour of evaporated milk, so it is preferable that you do not substitute with other milk.

Serve with your favourite spoon sweet on top.

You may also serve it with:

wow..it's creamy & delicious...my mouth's watering see your recipe..i am going to try at home..hope i can make it as tasty as u make it:-)

for Mastiha products see the blog - http://masticbest.wordpress.com we have the best Mastiha mastic at best prices we ship worldwide. or sen an e mail throu our blog. steve stamatis

We tried mastic icecream and "submarines" when we were on Kea sis. It is a flavour like no other:D

ahhhh... Mastiha! I need to buy extra of that in my next trip... I also love salepi :-D

Thank you for reminding me :-D Hugssss

This looks like a great change from the usual frozen yogurt and is definitely new to me. I've learned my new thing for the day.