Piroshki, were introduced to the Greeks by the Greek Pontiacs* who were forced to leave Pontus and scattered in all parts of the world, the majority of which came to Greece.

Piroshki are made from yeast dough usually fried.  You can find them in bakeries or fast food shops, with various fillings.

Their size depends on the occasion. We usually make big ones but bite size piroshkis are best for parties.   Who wouldn’t like to eat these for breakfast? I made different kinds, with minced beef, mashed potatoes, mushrooms and some sweet ones with apricots.  I have made them in the past with graviera or halloumi and mint and with feta parsley and dill. 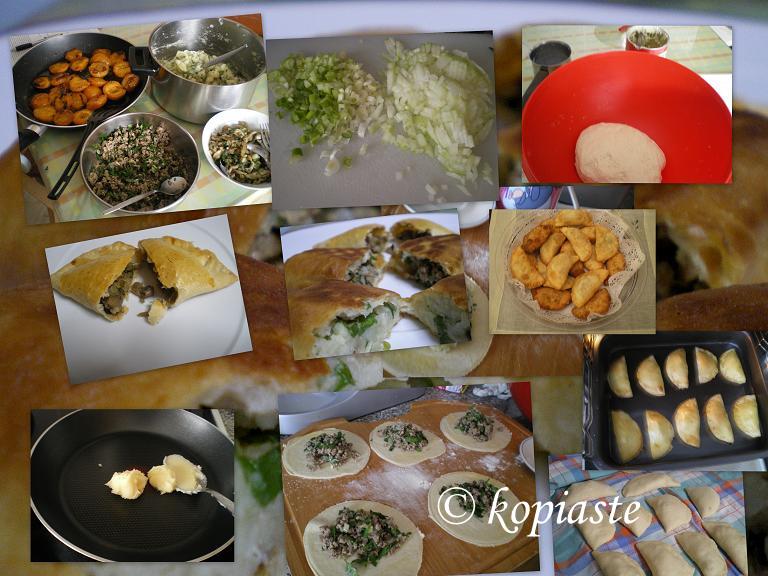 Pontos inherently means ‘sea’ in ancient Greek. In Greek mythology, as mentioned by Hesiod, Pontos was the child of Gaia and Aether. The term was used in ancient times for both the Aegean and the Black Seas. The Black Sea area generally, and the region around Trabzon specifically, are where Jason and the Argonauts sailed to find the Golden Fleece in the adventures of the Argonautica of Apollonios the Rhodian.

Historically the Black Sea was initially known as the Axenos (inhospitable) Sea, prior to its colonization by the ancient Ionian Greeks of Miletus and other Greek city states. The first Greek colony established on the northern shores of ancient Anatolia was Sinop circa 800 B.C. After the colonization of the shores of the Black Sea the name changed to Efxinos (hospitable) Sea. In time, other Greeks followed their path and, as numbers grew, more Greek colonies were established along the Black Sea coastline of what is now Turkey, Georgia, Russia, Ukraine, Romania and Bulgaria.

The region of Trapezus, now Trabzon, was also mentioned by Xenophon (430 – 355 BC) Anabasis, when his 10,000 soldiers had reached the Pontic Euxine Sea and cried out ‘Thalassa! Thalassa!’ – “The sea! The sea!”, the local people understood them. They were Hellenes as well and, according to Xenophon, they had been there for over 300 years. Over thousands of years the Trapezus colony, later called the Pontos Pontos region flourished, contributing to the development of a rich civilization with a strong Hellenic basis. This is verified by a various ancient Greek and Roman historians. For example, many accounts exist of the Mythridatic wars and the reign of Mythridates the Eupator and later his son Mythridates II. With the passage of time and the establishment of the Eastern Roman empire Pontos was placed under its control. Pontos remained isolated from the ‘modern’ Greek-speaking world afterward. This isolation however helped maintain the Pontic language with its strong roots to the ancient Greeks. For many years later they lived under Ottoman rule but maintained a strong sense of Hellenism and Greek Orthodoxy.

Throughout its long history Pontos was also inhabited and invaded by the Persians, Romans, Alexander the Great, Germany, Russia and finally, the Turks. The land also had its share of royal rulers such as the Komnenos family, which made Trabzond (Trapezounda) Empire of Trebizond capital from 1204 to 1461. Like other Christians in Asia Minor as Armenians or Assyrians, Pontic Greeks had to face persecution and suffer ethnic cleansing at the beginning of the 20th century (Hofmann 2004). In 1923, after hundreds of years, those remaining were expelled from Turkey to Greece as part of the population exchange between Greece and Turkey defined by the Treaty of Lausanne. ” By courtesy Kallitehniki Stegi Pontion.

The Pontiacs speak the most ancient Greek dialect and then come the Cypriots.

For those who are interested to learn more historical facts, many books have been written on this matter and some of them you can even download them. 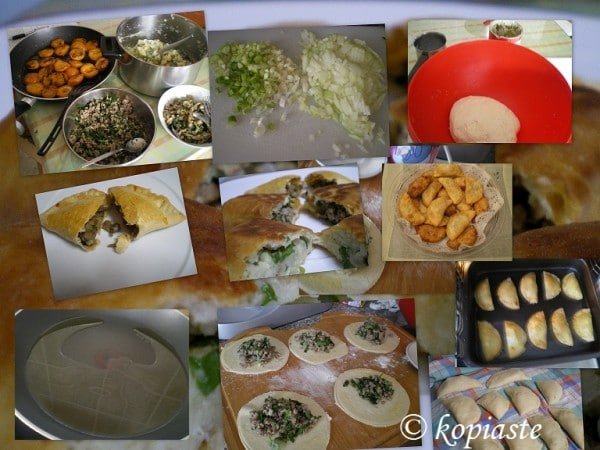 Heat the olive oil in a non-stick frying pan and sauté onions until translucent.

Add the ground meat and saute until it turns white.

Add the wine, mix and then add salt and pepper and mix until all fluid evaporates.

Remove from the heat and mix in the parsley. Set aside until it cools down.

Heat the olive oil and saute the onions and then add mushrooms. Add salt and spices and when done mix in the parsley. Set aside to cool.

Peel potatoes and boil until soft. Drain and mash with a potato masher.

In a non stick frying pan saute the onions until golden (but not browned). Add to the mashed potatoes together with the oil, add salt and spices and finally add the parsley.

Set aside until it cools.

Roll our dough about the size of your sausages.  Wrap them with dough and fry in hot olive oil. 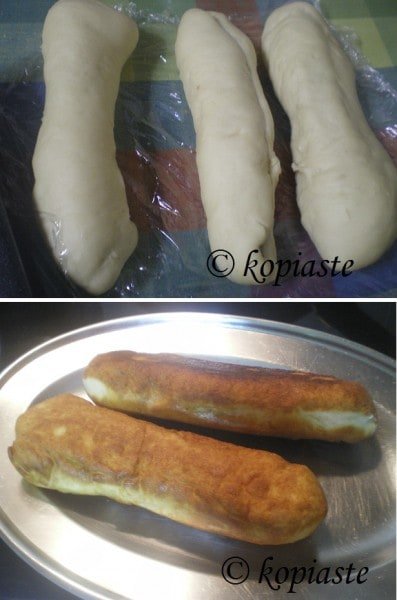 For the sweet filling I used some of the caramelized apricots I had prepared for another recipe.

10 apricots, halved and pitted
¾ of a cup of sugar
A few drops of lime or lemon juice
2 spoonfuls of brandy
1 tbsp butter
½ teaspoon ginger
1 tbsp honey
A few tablespoons of water to wet the sugar
½ cup of roasted pecans, crashed

Wash and dry the apricots.

In a non-stick frying pan heat the butter and add the apricots.

Add the sugar, brandy, lime or lemon juice, honey and gently stir.  Add water so that the sugar gets wet and does not burn.

Turn the apricots on the other side as well and as soon as sugar starts caramelizing add ginger and mix.

Set aside to cool and add the roasted crashed pecans on top.

Note:  I used 1/2 an apricot for each piroshki. After cutting two pieces of dough and brushing them with egg white, I placed an apricot with some pecans in the centre, covered them with the second piece and then pressed them together to stick. 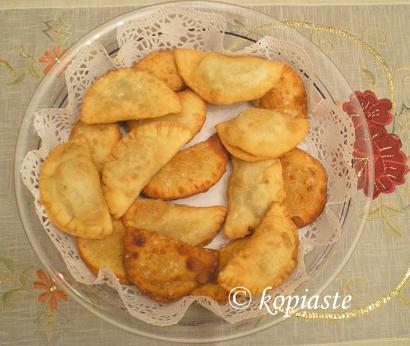 I am sending this recipe to Sia, of Mansoon Spice, who is hosting the event Weekend Breakfast Blogging, created by Nandita from Saffron Trail.

This is typical Russian and has nothing to do with 'Vareniki'... Greeks brought this from Russia (if you are talking about pontiacs), and the name comes from Russian "пирожки'...

I agree with you Cake. Potato piroshki are my favourites as well.

Thanks for all the wonderful background info Ivy. These look devine - I think the potato ones would be my favourite.

European food culture can be so intertwined....just like our Canadian cuisine. Piroshki are very similar to perogies in Poland, Vareniki in Russia,etc.No matter what they are one of my favourite foods. I sometimes make them but I love it when the ladies of the Ukranian churches have dinners and you can buy them, by the dozens!!!!