Artichokes are native to the Mediterranean and appear during spring. They are a variety of a species of thistle cultivated as a food.

Of course, we can get them frozen or canned but they are much tastier when they are fresh.

According to Greek Mythology, Dias (Zeus) the King of the Gods, had easy access to the women of the world and took full advantage of it.

Also, his power as a supreme god made him difficult to resist.

He fell in love with a beautiful girl called Cynara, who rejected him and refused to resist and Dias got so angry that he transformed her into a plant.

In ancient Greek the name for artichoke was Cynara (pr. Kynara) in modern Greek An(cynara) = ankinara.

I love artichokes and remember back in Cyprus when I was a child, that I would pluck the leaves and would eat that little part on the base which was edible and delicious.

Artichokes (cynara scolymus) do not need much water, so they are cultivated in hot and dry climates and they also grow in the wild (cynara cardunculus) as they do not need any particular care.

They are rich in antioxidants, iron, magnesium, phosphorus, potassium, fibre and vitamin C.

An example to the above is that 90% of production of artichokes in Greece is  produced in the region of Argolida in two villages called Iria and Kandia, of  the Municipality of Assini, not far from Nafplion.

The cultivation of artichokes began as these villages had irrigation problems.

If you are in the region during May don’t miss the Artichoke festival with traditional dances and folk music, as well as lots of  food with artichokes as its main ingredient.

In the past this plant was considered to be an aphrodisiac but nowadays this myth has been busted but it does have a lot of other health properties.

Artichokes contain an acid called Cynarin, which protects the liver from anything that might affect it such as hepititis or cirrhosis.

It is diuretic, anticeptic and helps relief gastroenteric problems.

They reduce the levels of cholesterol in the blood, it also reduces the sugar levels in the blood, it strenthens the immune system and recently studies have shown that the acids caffeic and flavoinoids help fight cancer.

How to clean and trim Artichokes

Learn how easy it is to clean and trim artichokes.

Preparing artichokes is easy as long as you know how to go about it. It’s not as difficult as you may think.

Be careful though as they oxidize quickly.

If you avoid cooking artichokes because you don’t know how to clean them, it’s very easy if you follow these simple steps:

First of all when buying fresh artichokes chose those that feel heavy for their size and if you press them just above the stem, where the heart of the artichoke is, it should be firm, with tightly closed leaves and tender stalks.

As artichokes oxidize and turn brown quickly, fill a bowl with water and add the juice of 1 lemon or some vinegar.

Your hands might get stained so it is better to use disposable plastic gloves when cleaning them.

Cut off the stem of the artichoke, up to the base but do not discard it.

Remove any leaves that are hard around the base of the artichoke.

With a sharp pairing knife cut the hard leaves around the remaining artichoke.

Spoon out the hairy choke.

Place the artichoke immediately in the water.

When done with all the artichokes now peel off the stem around the fibrous core.  This part is edible as well.

(Note:  as there are many varieties of artichokes, I am not sure if the inner part of the stalk is edible in all varieties.  Peel it and if it’s flesh is firm, then it is fine).

I took the video of a lady cleaning artichokes at the farmers’ market in Nafplio on the 19th April and posted it on Facebook the following day.

There were some negative comments because they said she was wasting half of it.

As I told them, the lady is doing her job as fast as she can to sell many kilos in a few hours for those who are lazy to peel their own artichokes.

In half an hour she cleaned a huge pile.

Personally, I believe she is doing a great job.

As there are many varieties of artichokes, I am not sure if the inner part of the stalk is edible in all varieties. Peel it and if it's flesh is firm, then it is fine. 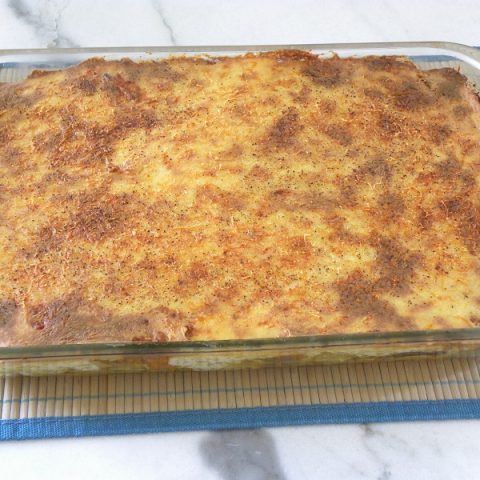 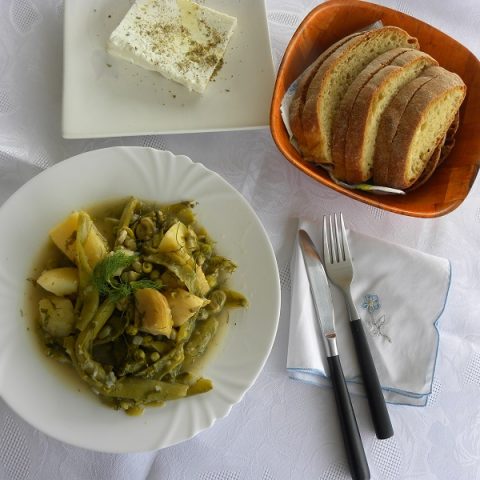 ankinara, this is wonderful. i had no idea. i can use this bit of info in so many ways. thank you for sharing. are greek / mediterranean artichokes very different from those we grow in the USA? also, do you clean & prepare jerusalem artichoke any different than the greek kind?

Ivy, this another dish I've yet to try...noted for future tasting!