A classic tyropita is made with layers of phyllo, preferably hand made but store bought is an easy but also delicious solution, which is layered and buttered or oiled.  Buttered phyllo is richer in taste but if you prefer a  healthier approach, try it with olive oil and it still makes a fantastic tyropita.

The filling can be made with any of the following Greek Cheese separately or a combination of one or more cheese: feta, anthotyro, myzithra, xinomyzithra, halloumi, graviera, kefalograviera, kaseri etc.

We Greeks love cheese and and we are considered to be the on the top of the list between European cheese consumers, amounting to 23 kilos per person per year and second come the French with 22 kilos, the Germans with 8 -10 kilos.

Unlike other Europeans we do not eat cheese as a dessert or as a meal supplement but for us it is a meal by itself.  We eat it all the time, as it is, fried or grilled and cooked, in a variety of meals.

One of the delicacies we make is tyropita and I have made so many the past few months but have not posted them, so I am putting them all in one post.  The smaller ones are caled “Tyropitakia” (small cheese pies). 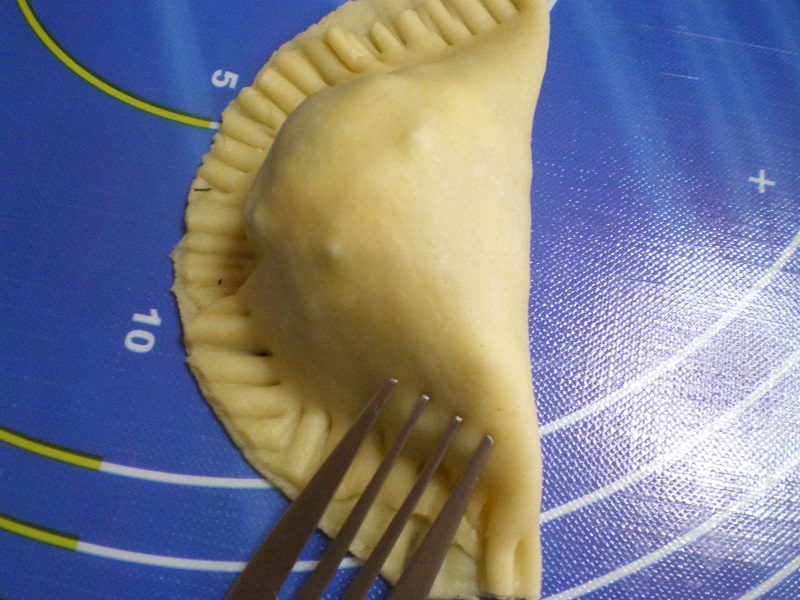 Tyropita can  be made in a large pan (ταψί [tap’si]) and cut into individual portions after baking or rolled in a spiral shape.  There are so many kinds of phyllo we use to make tyropita the best being hand make phyllo or hand made kourou phyllo, sometimes we also use store bought phyllo kroustas (which is the one used for baklavas), choriatiko (village type) phyllo, kourou phyllo, puff pastry phyllo, or even kataifi, which is a shredded phyllo.

Here are a few  variants some baked in a pan and others as individual tyropitas or appetizer-sized portions. 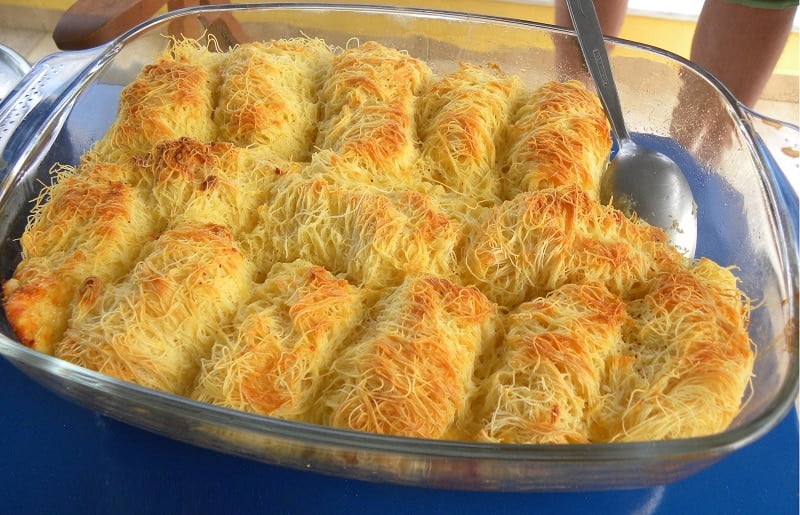 Tyropita with kataifi, feta and four other cheeses

Kataifi is a pastry made with a special form of shredded phyllo dough which looks like angel hair pasta but it is soft and can be handled and it does not crumble. Kataifi is usually used for making desserts which are filled with nuts and cinnamon and then bathed in a syrup. There are however a few savory recipes using kataifi and tyropita is one of them.

In this recipe it encloses cheeses which are wrapped in kataifi, soaked with milk and eggs and baked.  The result is similar to a soufflé.

When packed, kataifi strands join together and become a mass, so before using it, the strands must be fluffed up.

Serve warm by cutting pieces with a spoon

Tyropita with xynomyzithra made with Puff Pastry 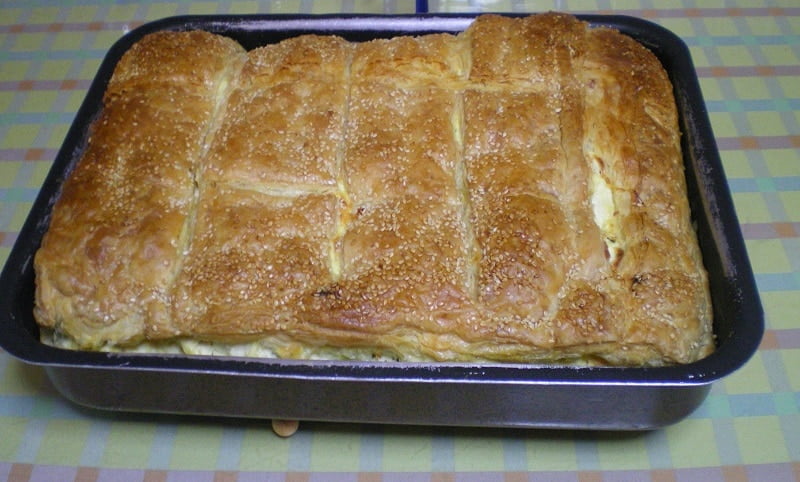 Xynomyzithra is a Cretan cheese, indigenous to Chania, Crete.   In this recipe the pita is made with puff pastry.

Note:  The amount of cheese and eggs I used was too much as my friends from Crete brought more xynomyzithra and I had no space in my deep freezer to store it.However, half the amount of cheese (and eggs) will make a normal tyropita.

You can substitute xynomyzithra with feta. 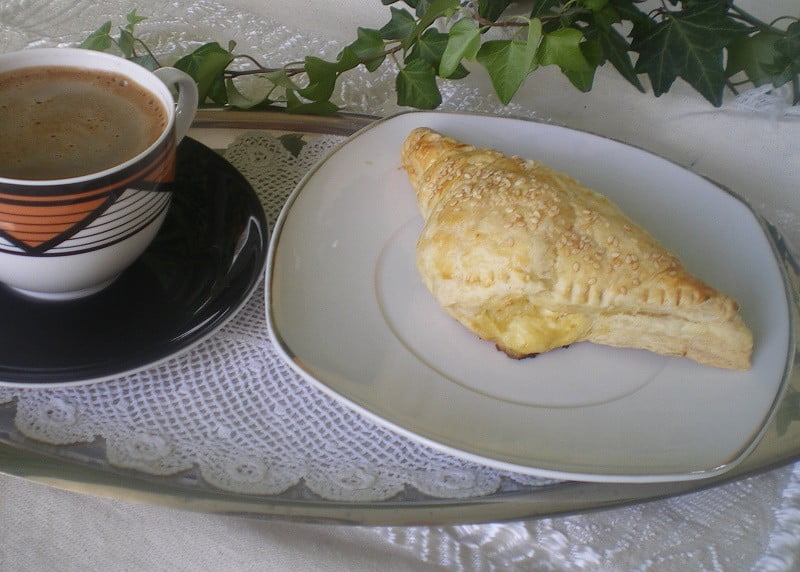 Tyropitaki  (plural tyropitakia), is the diminutive word of tyropita.  So any kind of tyropita made into individual servings, are called tyropitakia.

The puff pastry has two sheets of phyllo.  Here I have divided each sheet into eight pieces and added a generous amount of cheese filling.  Some were shaped rectangular and some into triangles.   You can also make them square. 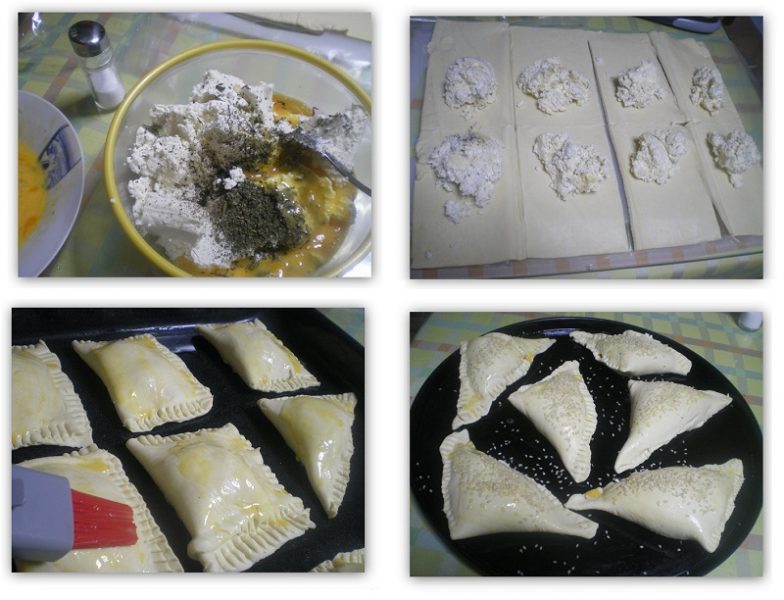 Note:  If cheeses used are salty, taste before adding salt and adjust.

Tyropita with Feta and phyllo kroustas

This tyropita is made with phyllo kroustas, which is the one we use to make baklavas.   The phyllos should be oiled well so that they do not stick with each other and form layers.  Seven or eight phyllos are enough for the bottom layer and 5 – 6 on top, as some of those in the bottom layer will be covering the filling, thus making more layers. 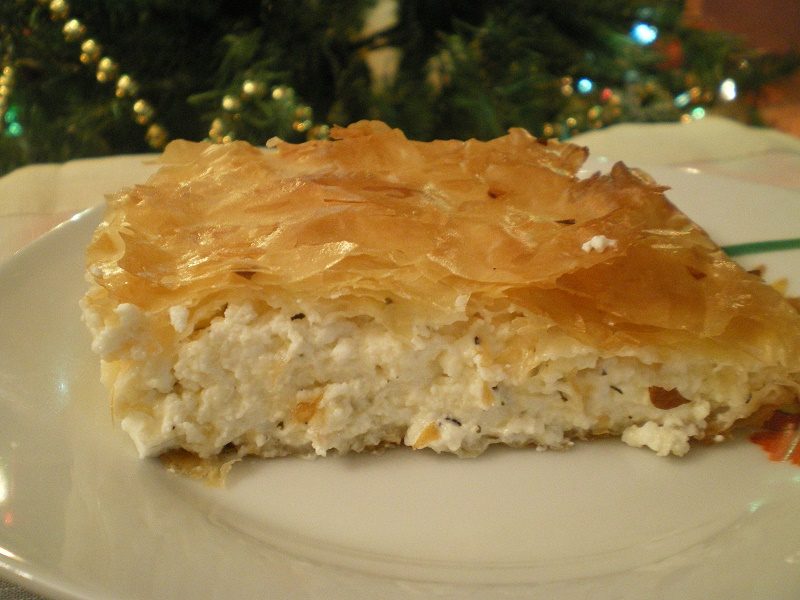 I am sending my recipes to Srilekha, of Me and My Kitchen, is hosting the event EFM SAVORIES.

Finally, here’s the simplest form of Tyropita you can make.  Your guests will think that you slaved in the kitchen, but the truth it doesn’t take more than 10 – 15 minutes to prepare.  All you need to do is brush the phyllo sheets and crumble the cheese!  Make sure that you have good quality Greek feta and anthotyro and Greek Extra virgin olive oil, to get the best flavour. 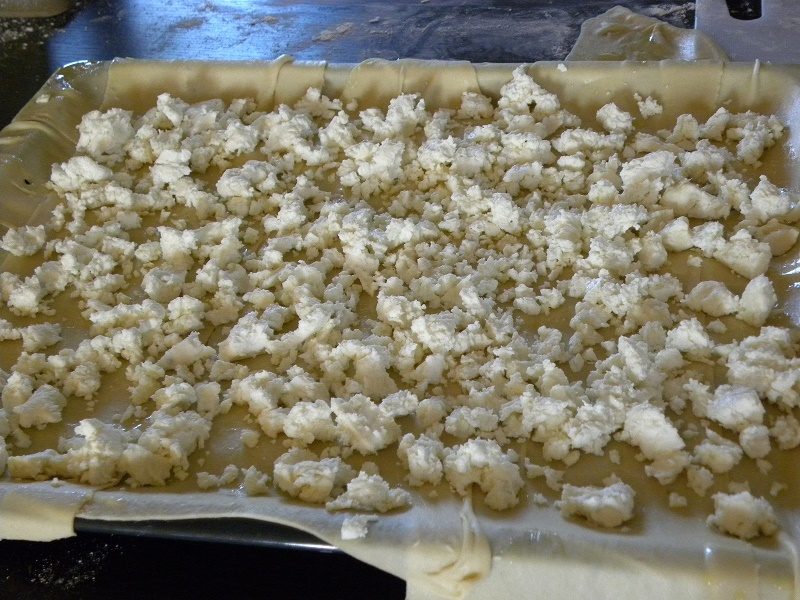 You can make it with only feta if you like, but feta is always salty, so if you want your tyropita not to be salty, you can mix in some anthotyro, which has no salt at all and bring it up to your personal preference. 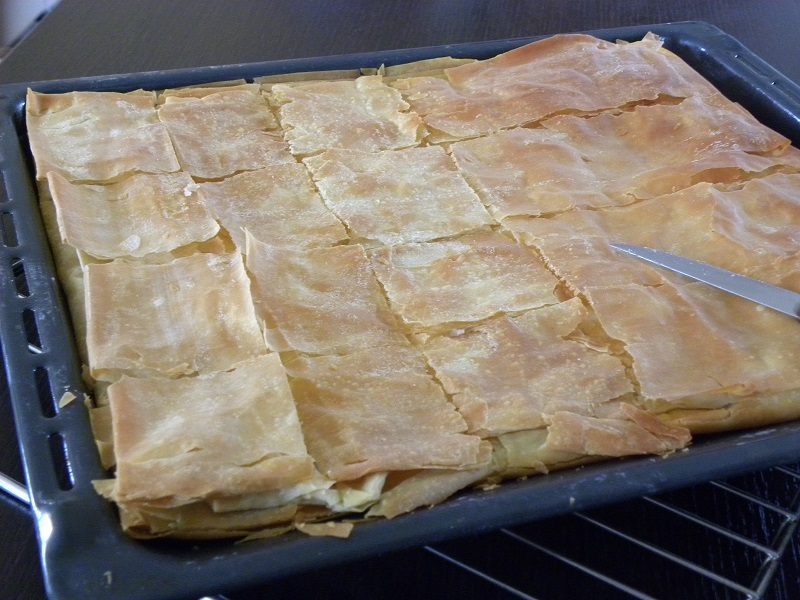 If you are serving it as part of a buffet, you can get at least 24 pieces.  Served as a main dish with salad you can get 8 – 10 pieces.

If you think it’s too much for you, just fold in aluminum foil and deep freeze whatever is leftover.  Thaw and reheat and it is just as good as the freshly baked one! 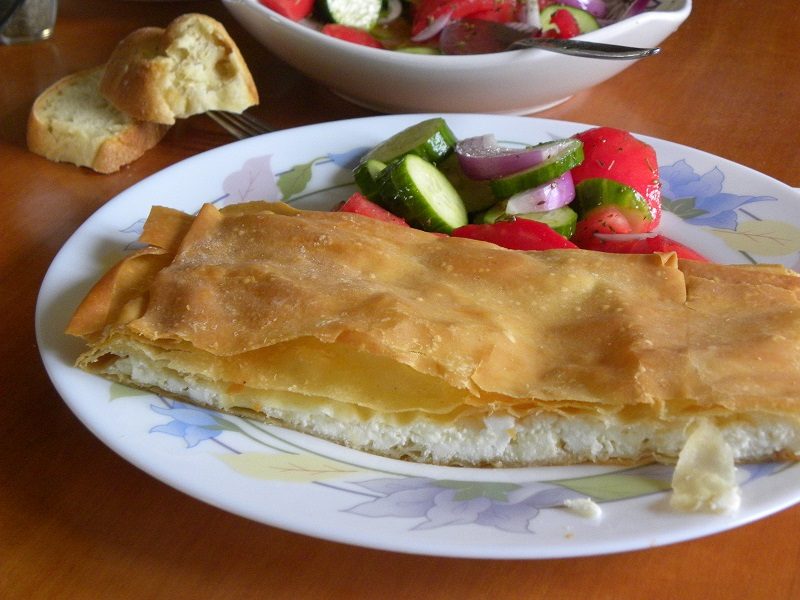 I love these Greek sweets Ivy - thanks for sharing the recipes with us.d

Any tyri sounds great to me but different versions of tyropita sound even better!!! Happy New Year to you and your family!

I love all these different versions and now that I know what it is and know I love it, I can appreciate it all the more. The kataifi version is fabulous. I've only used kataifi with apples, deep fried and really to die for sprinkled with icing sugar. The puff pastry I hadn't even thought of. Thanks for this. It's great.

Ivy, this post has me really hungry! I just love cheese.

Best wishes for the new year!

amazing Ivy, all looks so delicious ...I have eaten a similar kind of feta cheese filling puff pastry, once in a Restraurant in US which I liked very much and you made all these great looking recipes WOW!

Wish you a very happy new year hugs and smiles