167 shares
Jump to Recipe
These ice pops are refreshing, delicious, healthy, with no preservatives or additives, without any artificial colour or aroma and only 61 calories each.

Silikomart is a company which offers a wide range of refined and innovative 100% food safe silicone products and were kind enough to send me some of their products to try.  They sent me a cathedral shaped loaf cake pan and a kit composed of 12 moulds shaped as butterfly, heart, star and flower to make ice pops. ‬

I wish to thank them very much.  I will post about the loaf cake pan in another post with a recipe I have already made so today the post will be about the ice pops.

There are 12 moulds in the kit as well as 50 sticks and a recipe leaflet with recipes.    You can make ice pops with ice cream , sorbet, granita or smoothies mixtures. 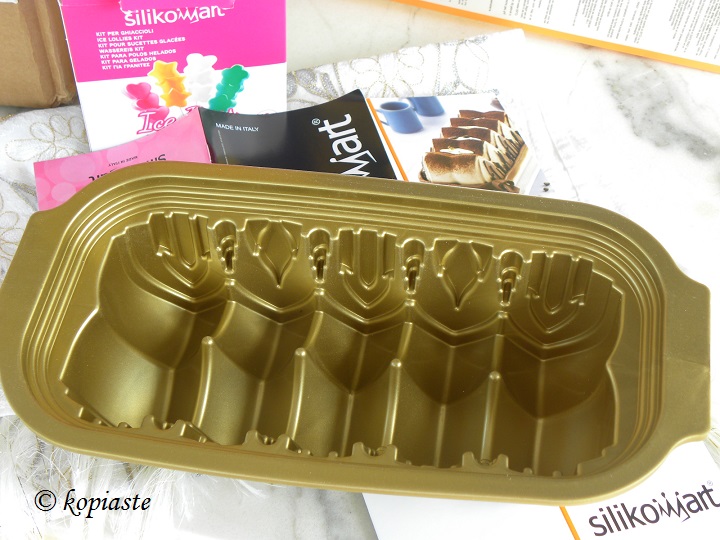 I make 90% of my recipes by improvising with ingredients I already have at home.

Last Wednesday, we bought lots of fruit from the farmers’ market:  watermelon, melon, peaches, nectarines, apricots and cherries.   However, how many fruit can two persons eat?

The watermelon was cut in a 1/4th slice (around 2 kilos) and was the first to be consumed.

We kept the melon to be eaten last and the remaining fruit were eaten on a daily basis.

The cherries are the most perishable so after 2 – 3 days if non consumed they start to spoil so if there are any leftover I usually cook them before they do.

I used a little bit of honey for the flavour and added stevia so that they had less calories. 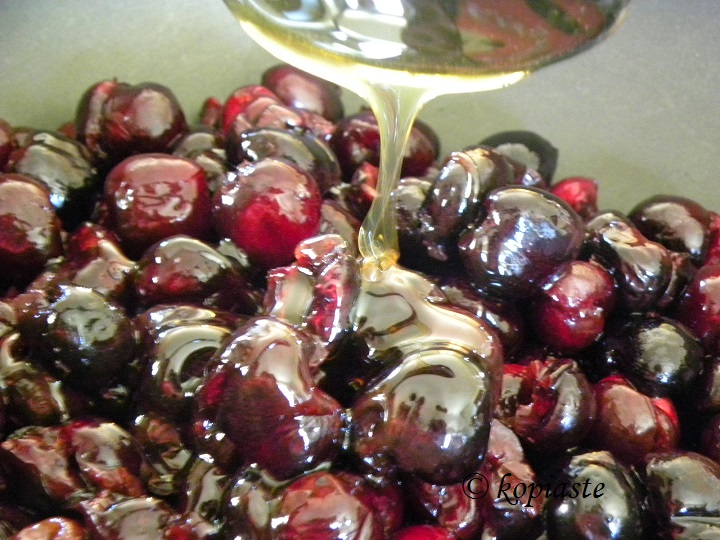 We have some lavender in our garden(everything is organic) and this year I picked some to dry a couple of weeks ago. 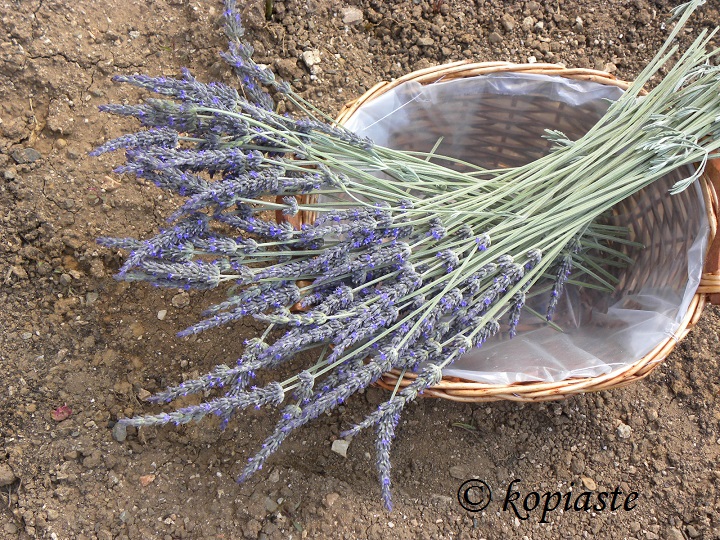 How to dry Lavender

After asking my friends on Facebook, if they wash the lavender before drying it, most of them said they do not wash it.

As this year we had a lot of rain and some times it was raining dust from Africa, I decided to wash it.

I left it in a colander overnight to drain and the next day I wrapped it in a tulle because I don’t want flies or other insects to touch it, and hang it in doors (never in the sun) to dry.

This of course always depends on the climate conditions.  The climate here in Assini, is rather humid, especially during the mornings, so in other places it may take less time to dry.

Since my lavender had not dried, I used some of the fresh lavender I left on the plant.  I used three flowers which I inserted in disposable tea bags.  Although they are disposable, if you wash them you can use them multiple times as they are quite durable.

I used this lavender to flavour the cherry compote I was making.  I wanted this cherry compote to be low in calories, so I just added some honey, for the taste and flavour and sweetened the syrup with stevia.

If you are diabetic it is advisable not to add any honey, unless you consult your doctor first. 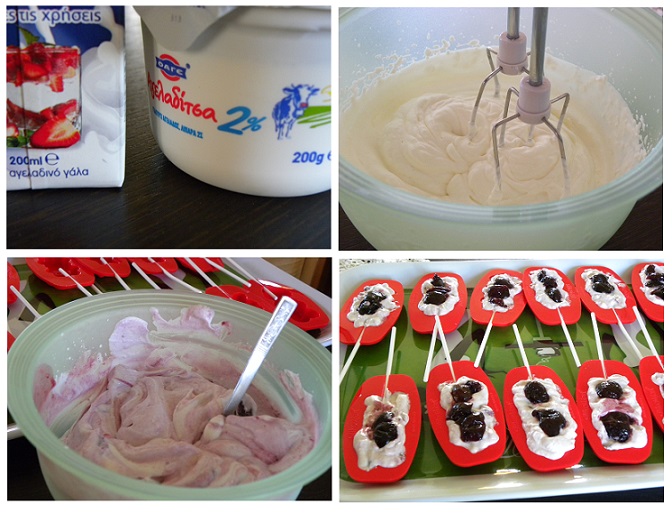 What I made was something between an ice cream and frozen yoghurt.

While the compote was cooling, I whipped the heavy cream which I stored in the fridge and all I did was to  add the yoghurt to the cream and mix in part of the compote.

The quantity I made was enough for over 24 ice pops.  I made 12 and in the leftover cream I mixed more compote in (about 1 cup) and made an easy dessert.

If you want to make more ice pops, you can leave the cream in the fridge until the next day and make more.

When the first batch is ready, after removing them from the molds, you can wrap each one in cling film and put them all in a freezer bag.

Whenever you crave for something sweet, one of these ice pops is refreshing, delicious, healthy, with no preservatives or additives, without any artificial colour or aroma and with only 64 calories each. 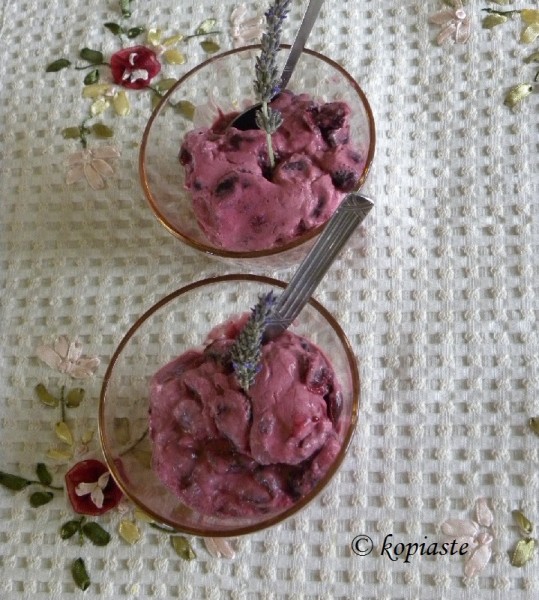 You will find the recipe at the end of the post. 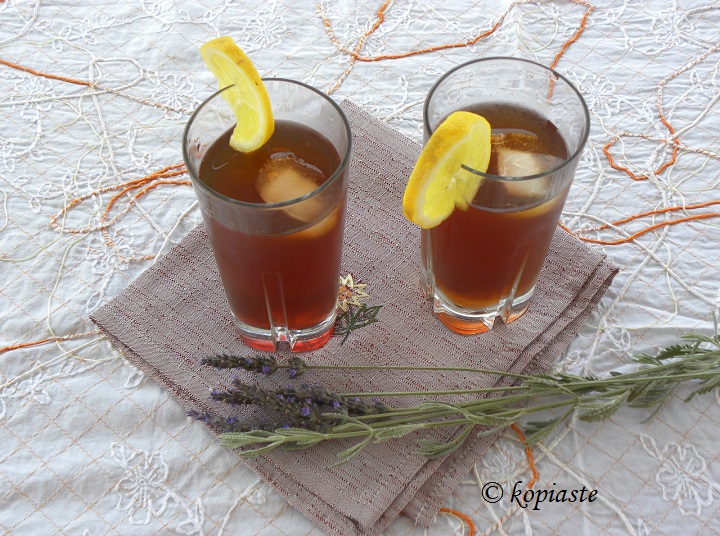 What better than an ice tea to quench your thirst during the hot summer months!

So, when I finished with the cherry compote, I used the leftover lavender tea bag which was soaked with cherry syrup to make ice tea, combining it with raspberry tea leaves.

*If you want the iced tea to be sweet you can add 1 stevia disc in the hot water or if you don’t mind the calories you can add more syrup, honey or sugar.

Today’s even is hosted by Simona Carini, of Briciole, who will be our host for the letter M as in Minneapolis (United States). 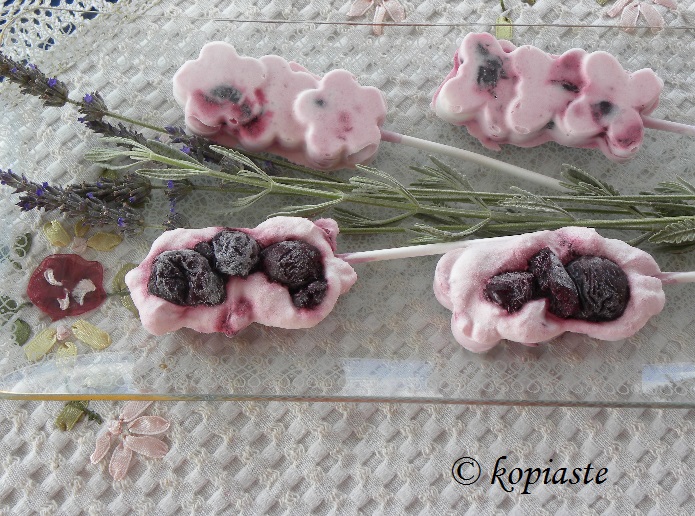 For the Cherry compote:

Remove the stalks and pits from the cherries.

Put the lavender flowers in a disposable tea bag filter.

Put the cherries in a frying pan or pot, add the honey and the tea bag and cook for five minutes from the time it starts boiling. Set aside to cool.

Whip the cream until peaks form and mix in the yoghurt. Refrigerate until ready to use.

Add 1 cup of cherries and mix.

Fill the ice pops with cream and cherries and then add the stick, at least 3 - 4 cm inside the cream. Add more cherries on top.

Refrigerate for a few hours until they set. 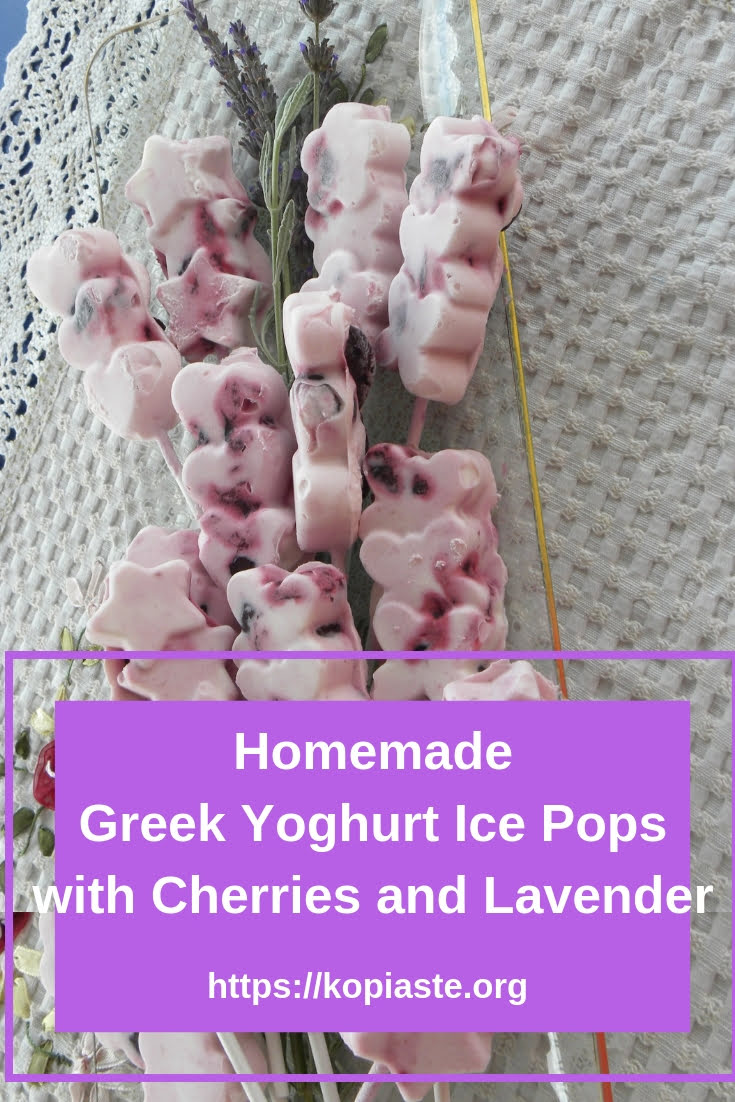 Lavender! What an excellent idea that is! I've never thought to add lavender to yogurt but will be trying it out now :) Thanks!

They look adorable! Thank you for contributing to the USA stop of the Abbecedario.

I love greek yogurt and the lavender in these recipes really adds a nice touch!