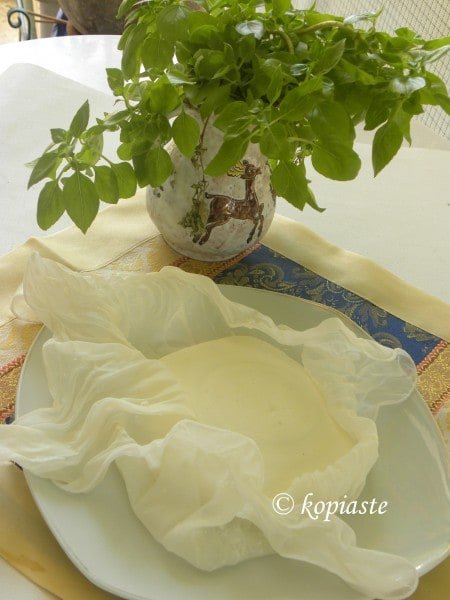 Here I am.   I made it to the second challenge of Project Food Blog.  Wow, that’s really an achievement taking into consideration that almost 2000 food bloggers have now been eliminated down to 400.

I am now posting from Cyprus but as I don’t have an internet access at home, I won’t be able to visit until I come back to Athens, next week.  Thank God, I had prepared this post before I left from Athens, just in case.

The second challenge is to create a classic ethnic dish from another culture, keeping it as authentic as the original and to document why we chose this dish, after research and to document our experience, through a compelling post.

To be frank my first choice was to make a Romanian dish, inspired by my friend Simona, of Alison’s trials.   However, Simona blogs in Romanian and have not managed to make a recipe from her blog as google translator gives you an idea of what is written but it is not trustworthy.  I have seen a lot of funny translations, such as the example I can remember, where  the French word pêches, (peaches) is translated into fisheries, as it also means to fish.   I communicated with Alison and asked her to suggest a few traditional Romanian recipes in English.  She was kind enough to send me a few links which were wonderful recipes, such as Aubergine salad,  zacusca,  piftie or racitura (meat jelly) or stuffed cabbage rolls or a sweet Cheese Pie, which I found after google searching.   However, we make similar recipes in Greece Melitzanosalata,  pichti or zalatina, lahanodolmades,  and tyropita.

As the challenge specifically requests us to pick a dish we are not familiar with and to get out of our comfort zone I decided to explore Indian cuisine.  I remembered having bookmarked a lot of recipes during the three years of blogging and going through the list, it was like fate.  I bookmarked this recipe from my friend Soma’s blog e-Curry exactly a year ago.  I always wanted to make paneer, so paneer I was going to make.

For those of you who are not aware, paneer (Hindi: पनीर panīr, from Persian پنير panir) is a type of  fresh cheese  made from milk and lemon juice, or other acids such as vinegar, “live” yoghurt, kefir culture or from the whey of previously made paneer.

Paneer is a white, soft cheese, similar to the Greek cheeses called anthotyro, myzithra or anari, the Mexican queso fresco, the Italian ricotta and it is also made in many other countries, as well.  This type of cheese are made from cow’s or ewe’s milk – and/or goat-milk whey. After making hard cheeses such as kefalotyri, graviera, halloumi. mozarella etc., additional milk is added to the whey and the soft cheeses are produced.    Unlike the above cheeses, paneer is vegetarian as it does not involve the use of rennet, but the milk curdles after the addition of the acid.  Lots of Hindus are vegetarians, so this cheese provides a good source of protein.

Paneer is used in curries, served with spinach (palak paneer) or peas (mattar paneer), wrapped in dough and deep fried (paneer majestic), paneer tikka (a vegetarian version of chicken tikka, paneer placed on skewers and roasted), kadai paneer,  shahi tukda (a dessert made by frying paneer),  Rasmalai, etc., as well as in other desserts like Sandesh, which my friend Soma made, from where I bookmarked the recipe.   I would love to make this recipe soon, but I will have to see if I can find some molds first.

Making paneer was very easy but you have to be extra careful when heating the milk, to mix it regularly so that it does not burn and stick to the bottom.  If you are afraid it will burn, use a double boiler, to be on the safe side.  I’ve read that you add the acid at 190o F –  88o C but as I do not have a thermometre, I added it as soon as I saw steam coming from the pan.  At boiling point it will start producing the curds.  Keep mixing with a wooden spatula for about five minutes and then line a colander with cheesecloth and strain. 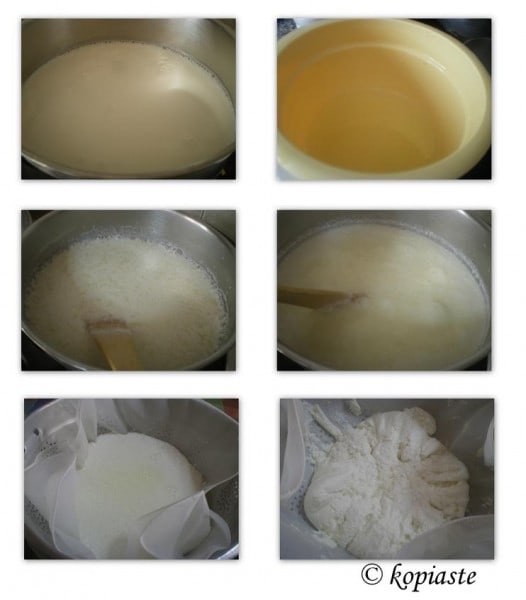 If you want the cheese to be soft and granular, fifteen minutes are enough to drain most of the fluid.  You can used this soft cheese to make cheesecakes or wrapped in phyllo and fried, bourekia as we call them in Greece or a savory cheesecake, like the one I made.

In order to have a firm cheese which can be cut, sliced, fried etc., after folding the cheese in the cheesecloth, add some weight on top and leave it to drain for 5 – 6 hours.

(Note:  At this point you can incorporate the herbs and spices in the cheese and then drain). 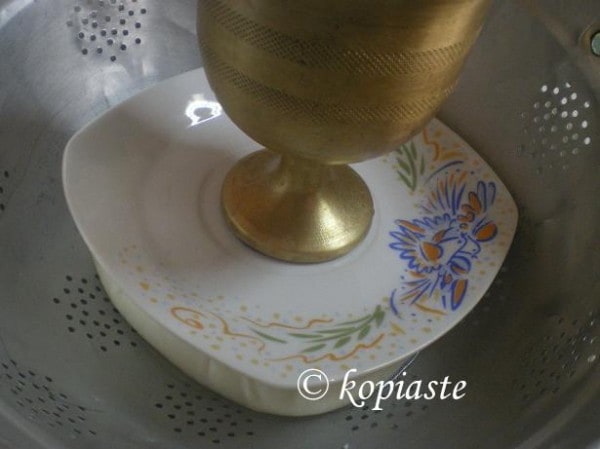 Apart from using the whey to make paneer again, the second time I made it, I used it to make a rice pilaf, which added a wonderful taste to the rice and I think it would also be great to boil pasta in it.

I loved the experience of making my own cheese and look forward to trying new methods in the future as well.

How to make Paneer Goat Cheese

The first time I made the cheese I made it with cow’s milk and made half the above quantity, so we tried a little plain, but it was a little bit bland, we tried some with honey (not bad) and when there were only two slices left, I decided to see if I could make saganaki.

I heated some olive oil in a frying pan, cut the cheese about 1 cm slices and fried it.  It holds well without having to flour it.   Greek saganaki is more tasteful but with some lemon juice on top, it wasn’t bad at all.

The next day,  I made some more, this time I used goat milk, without salt, to see the difference.  Depending on the type of milk used, you will get a different flavour.    We love goat milk and most of the Greek cheeses are made with ewe’s and goat milk,  but if you are not used to the taste, you may not like it.   The more fat content in the milk, the tastier the paneer will be.  I noticed that adding more lemon juice it produces more whey.  I liked the slight sourness in the cheese as it reminds me of xinomyzithra but if you don’t like it you can wash the curds to remove the acid.   My conclusion is that I definitely prefer it with goat milk.

I drained the curds for only 15 minutes so that the cheese would remain soft and granular and made a recipe of my own.  The concept was based on a traditional Greek cheese recipe we make in Greece called plastos or alevropita, and a similar tyropita with pumpkin, called badjina , the second part was to add the paneer in the middle and the third to add a crumble on the top.   This fusion tyropita was amazing and it disappeared in no time. 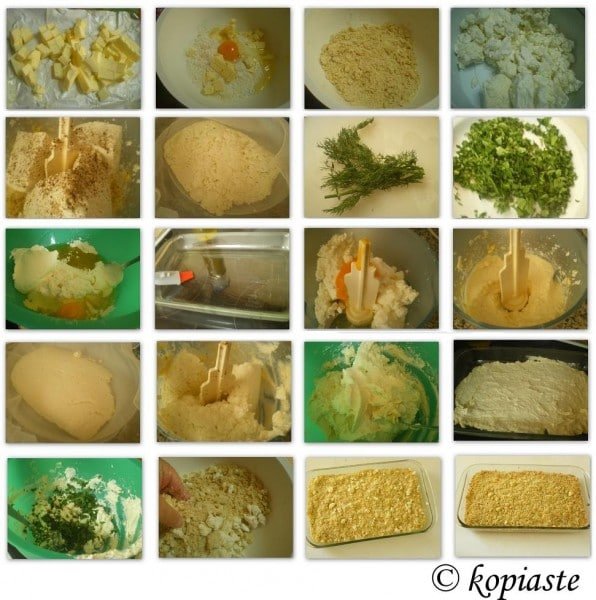 Preparing the crumble:  Cut the butter into small cubes and place all the ingredients in a large bowl.   Use your hands to rub it.    Continue until mixture is lumpy.

Refrigerate until you are ready to use it and then mix in the feta crumbles.

Put the flour, olive oil, salt, egg and Greek yoghurt in a bowl and mix with a spoon to make a very thick batter.

Place feta with the egg in the food processor and mix until it is creamy.  Then add anthotyro, salt and pepper and mix again.  Mix this cheese cream with the batter and spread it on the greased baking dish.

Using the same food processor (do not bother to clean it) put the paneer and mix until creamy.  Empty it in the bowl we used to make the batter, season with salt and pepper and mix in dill and parsley.

Spoon the paneer mixture on top of the cheesy batter.  Finally add the feta crumbles to the crumble and cover the paneer.

Bake in a preheated oven at 180ο C for about forty five minutes or until it browns.

Serve hot or cold, as you prefer. 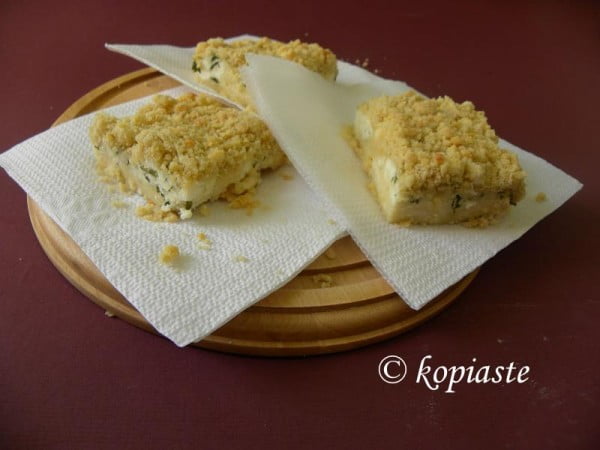 I as an Indian never new that making paneer was so easy. Thanks for sharing. Felling Hungry:)

How interesting! I always wondered how paneer is made, thanks for this insight and congratulations to your great blog.

That crumble looks amazing. Then again, it's made with cheese, butter, herbs and a bit of flour, deliciousness is guaranteed. I love how informative this post is, you went beyond just one recipe. You've got my vote! Good luck this week!

Your cheese looks delicious Ivy! You make the very best Saganaki! Good luck in this round!