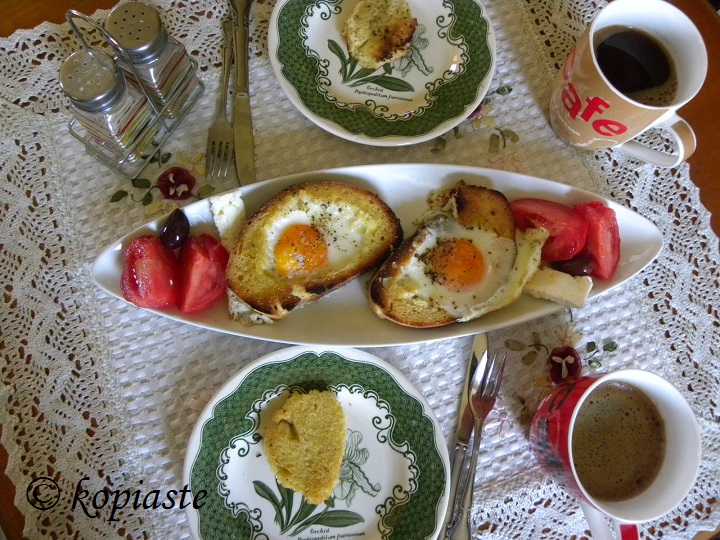 These slices of rustic village bread with an egg fried in the center are so simple to prepare but yet so delicious for breakfast or brunch. 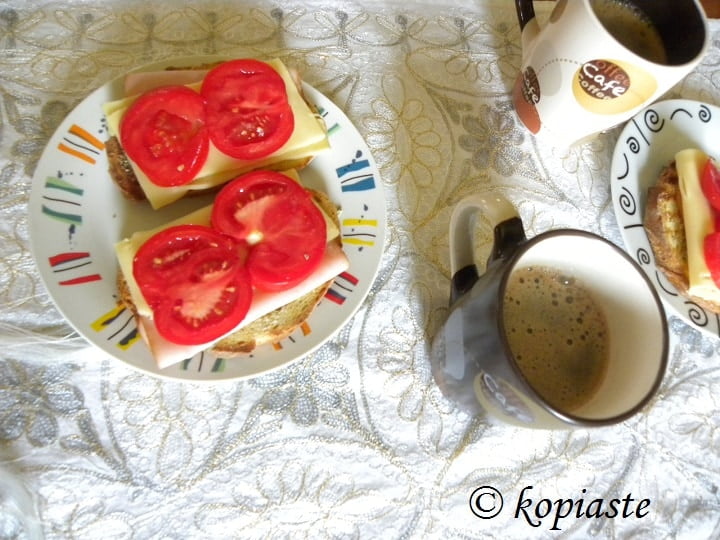 The  addition of the egg is something I saw on the internet but slices of bread with olive oil, salt, pepper and oregano, baked over charcoal is an old Greek tradition and is served in many Greek restaurants, either alone to accompany other dishes or with some ingredients on top, similar to an Italian bruschetta. 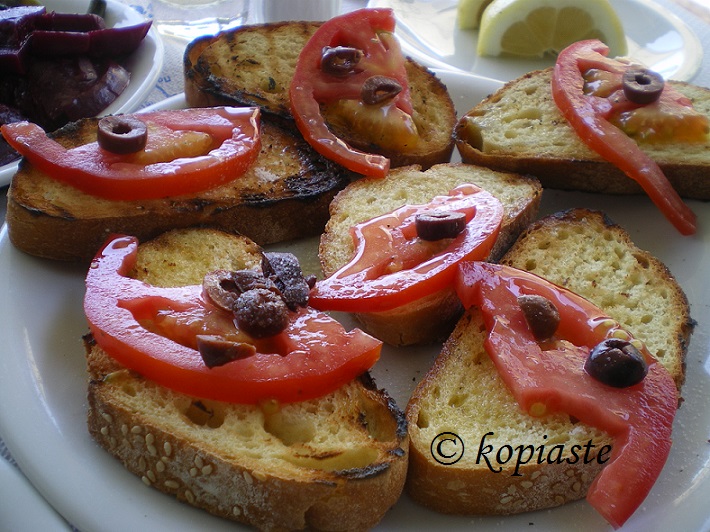 If you want to make this easy snack just toast the bread, then add the olive oil and the spices and add your favourite breakfast ingredients on top.

Let me introduce you to something similar we have in Greece, called “Peinirli” which is yeasted dough, shaped like a flat-bread boat with bacon, cheese on top and an egg is then baked on top.  (Photo from my cookbook “More Than A Greek Salad”). 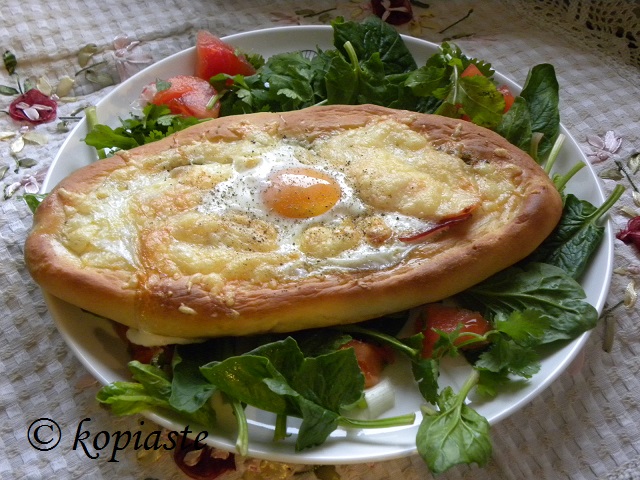 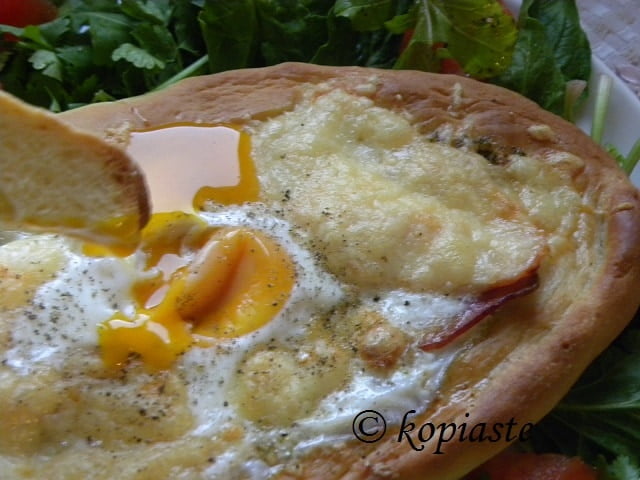 We usually stay up late in the evening watching T.V., and even if we want to wake up a little late in the morning, here in the village some of the people do not respect the obligatory hours for rest, during which they are not allowed to make any disturbing noise.  However, as this is a rural area some of them begin using their chain saws and weed cutters at the crack of dawn, when it is not too hot. It is a bit frustrating to be awaken by such irritating noises but because it is very hot during summer, we can understand why they do it! 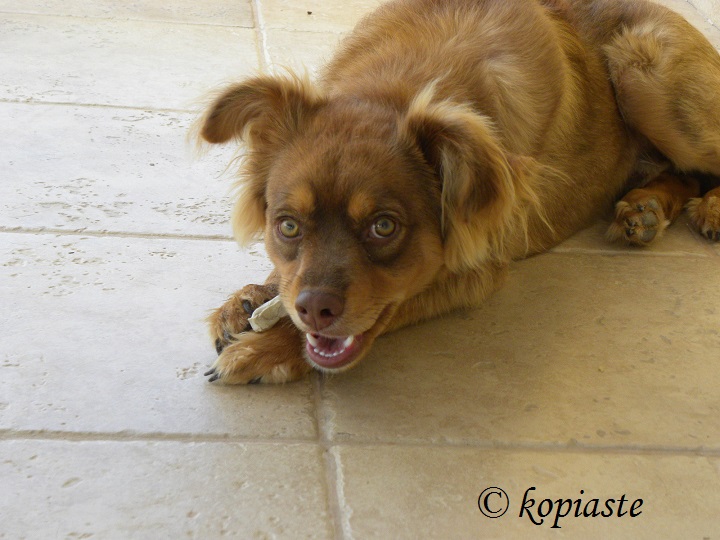 Let me also introduce you to Dias, which in Greek is also called Zeus and the genitive case becomes Dias.  Dias, is our dog and has been with us since late March this year.  I do not remember mentioning him before here on my blog but I guess my friends on Facebook are probably fed up, seeing me posting pictures and videos all the time.  Well, he also wakes us up at around 7 – 7:30 a.m. in order to take him outside to pee.

Since we get up early, we usually have breakfast around 8 o’clock and lunch around 4 p.m.  If it’s not Wednesday or Saturday which are the days we usually go to the farmers’ market, where we spend almost all the morning in Nafplion doing other shopping as well, the remaining days my husband usually is occupied either in the garden or trying to finish a few chores in the house, which were left unfinished due to the economic crisis and lack of money to hire someone to do them.  The interior of the house needs to be painted and our basement is a mess due to flooding during winter and spring.  I am usually occupied cleaning and cooking and taking Dias out for a walk.  When we are not too tired we go to the beach.  That means that we end up having lunch around 4 p.m.

Around 11 a.m. when it’s time for our coffee break, I prepare something for brunch since we will be eating much later. 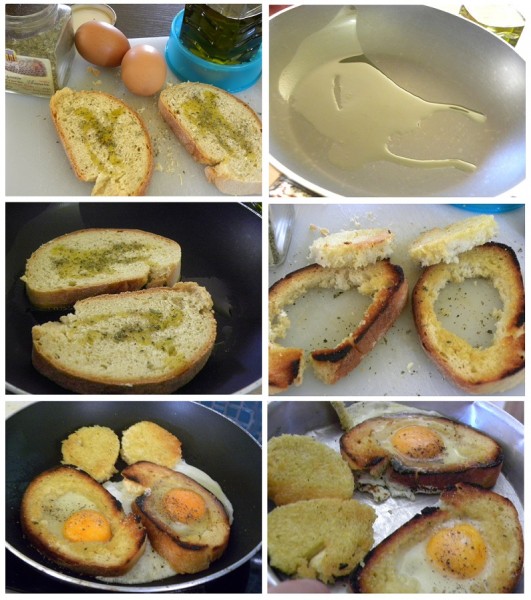 These slices of rustic bread are amazing and a good way to use leftover bread.  I drizzle some extra virgin olive oil on top and sprinkle some salt, freshly grated pepper and oregano.  I then fry them and when the second side is almost done, I remove the bread which is around the crust and add an egg in the centre.  When it’s almost cooked I season them with salt and pepper and put them in the oven so that the egg whites on top are cooked.  That’s when I prepare our coffee as it just needs a few minutes in the oven and they are ready.  In case that you do not have a frying pan which can go in the oven, just transfer them using a spatula in a baking pan.

The crust becomes crunchy and the taste of bread with the best olive oil in the world, salt, pepper and oregano  is just amazing!  The bread which has been removed is just perfect to dip into the egg yolk! 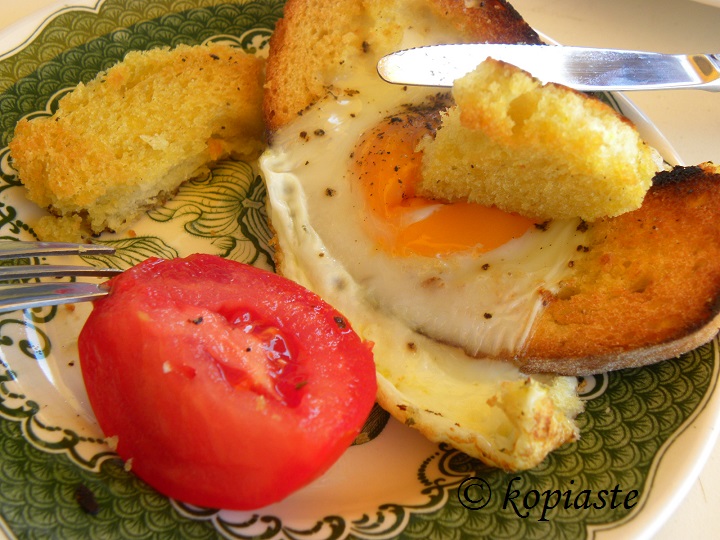 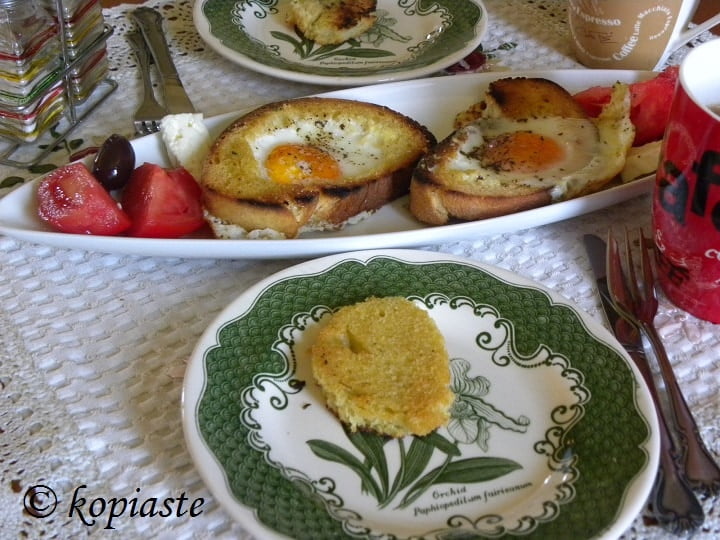 Savoury Kaikanas with Zucchini and Feta

As a child I grew up loving when my parents made eggs in a nest for me! Such a fun and delicious dish. This looks like an interesting twist on that recipe and I'm thinking I'll have to give it a try!

Simple, fuss free and delicious! I need to make some of those for the breakfast too. Hallo Dias :-))