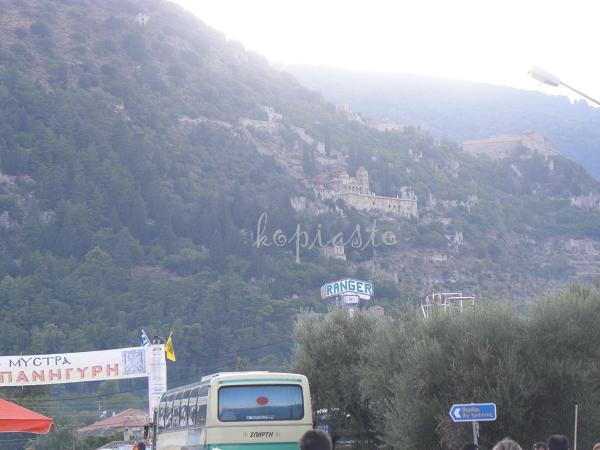 Mystras or Myzithras (Greek: Μυστράς, Μυζηθράς) meaning cheese-maker probably because they made the Greek cheese myzithra there.Mystras, which is situated on a steep foothill on the northern slopes of Mount  Taygetus, 6 kilometres northwest of Sparta, was a fortified town in the medieval Peloponnese. In the 14th and 15th centuries, it served as the capital of the ByzantineDespotate of the Morea, experiencing a period of prosperity and cultural flowering. 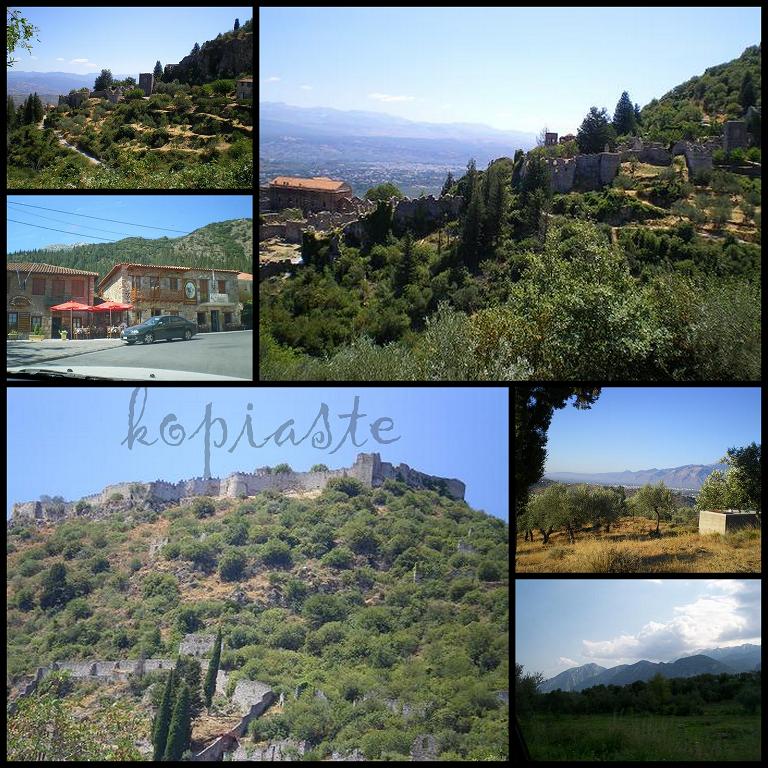 The castle, on the top of the hill, was founded in 1249 by the Frankish leader William II de Villeharduin, who built his palace there are surrounded it with walls, which defended the castle for another 400 years. After 1262 it came under Byzantine control, during which period all the churches were built and the city  had over 2.000 houses.  At the middle of the 14th century it became the seat of the Despotate of Moreas. In 1448 the last emperor of Byzantium, Constantine XI Palaeologos, was crowned at Mystras. In 1460 the hill was captured by the Turks and in 1464 Sigismondo Malatesta of Rimini managed to capture the city but not the castle.

For a short period Mystras came under the control of the Venetians (1687-1715) under Morosini (the same person who blew up the Parthenon) but was again taken over by the Turks. At its peak it had 40.000 inhabitants, whereas today modern Sparta has only about 18.000. It was one of the first castles of Greece to be liberated during the revolution of 1821.

The foundation of modern Sparta, approximately eight kilometres to the east, by king Otto in 1834 marked the end of the old town’s life. 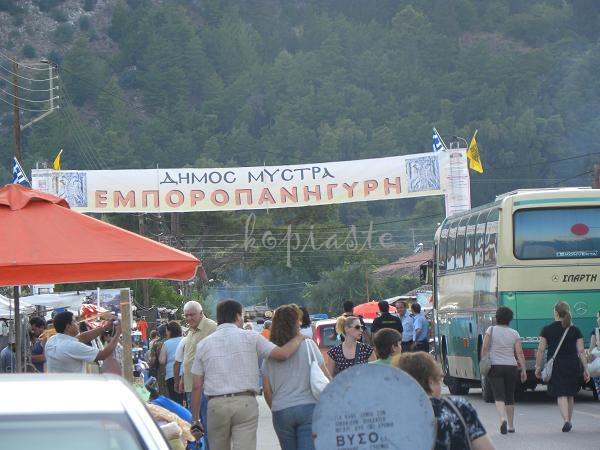 After this short introduction to the history of the place, I suppose that your are wondering what panigyri is.

Mystras Panigyri is one of the oldest fairs held in Peloponese and is held during the last week of August, to commemorate Saint John (Aghios Ioannis o Prodromos, St. John the Forerunner).

From older years, during the church ceremonies, a lot of people gathered there, so it was a good opportunity for the farmers and merchants to exhibit their farm products or manufactured goods and for the people there to buy what they needed for their household or occupation.

The panigyri was always accompanied by other festivities as well as food, music and dance differing from place to place. 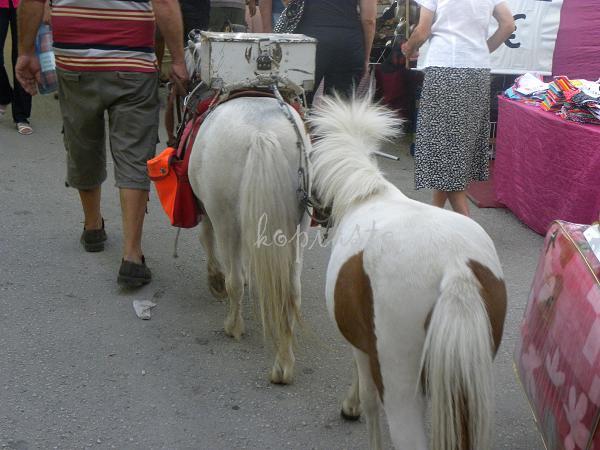 In Mystras fair, quite away from the main fair there is a location where they sell animals, such as cows, pigs, sheep, goats, hens, rabbits and donkies.   We did not visit the animal fair but it was on our way to a local restaurant and saw them from the car.

The ponies here are only for the entertainment of children.  A short ride, which is most of the times accompanied by a polaroid photograph. 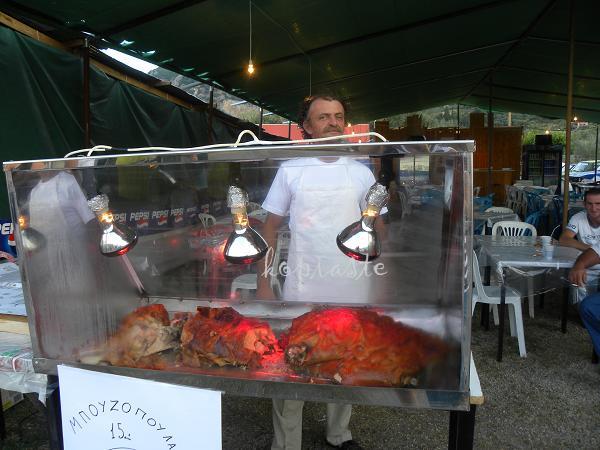 The traditional food served at this fair is bouzopoula, which is the name of roasted pork, only in Peloponese. 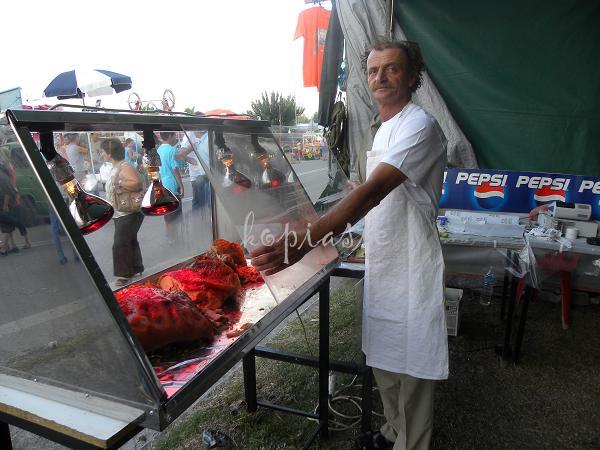 I asked one of the cooks how this is prepared and he told me that the pork is roasted on the spit or baked whole in the oven, flavoured with salt, pepper, garlic and local oregano. 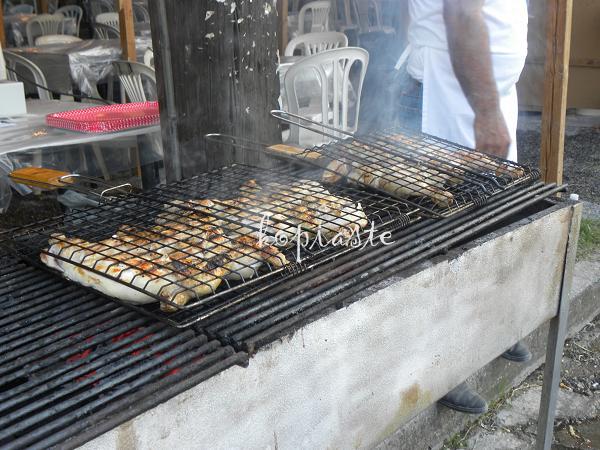 You can also eat souvlaki, gyros, grilled chicken, sausages etc., at restaurants under a tent, with plastic chairs and tables, served in plastic plates.

Other delicacies you can eat are Greek local desserts, such as loukoumades, (doughnuts in syrup), halvas Farsallon,  which is a labour intensive procedure to make it and is made only by experts in large caldrons, pastelli etc. 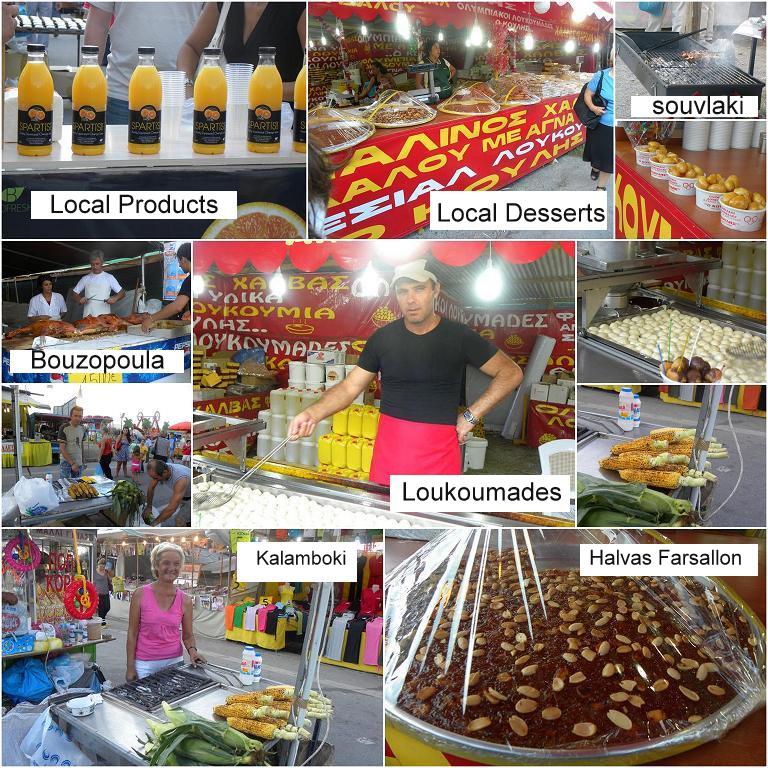 You can buy almost anything at this Panigyri, clothes, kitchen utensils, agricultural tools, carpets, silverware, toys, accessories, forklore handicrafts etc.  Merchants come from all over Greece and then they head to the next panigyri. 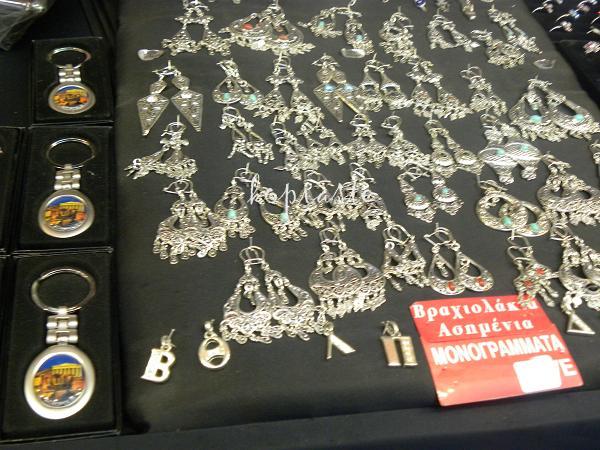 Just a small sample of a few things I have pictured.  The picture in the middle of the collage is a seal to make designs on bread. 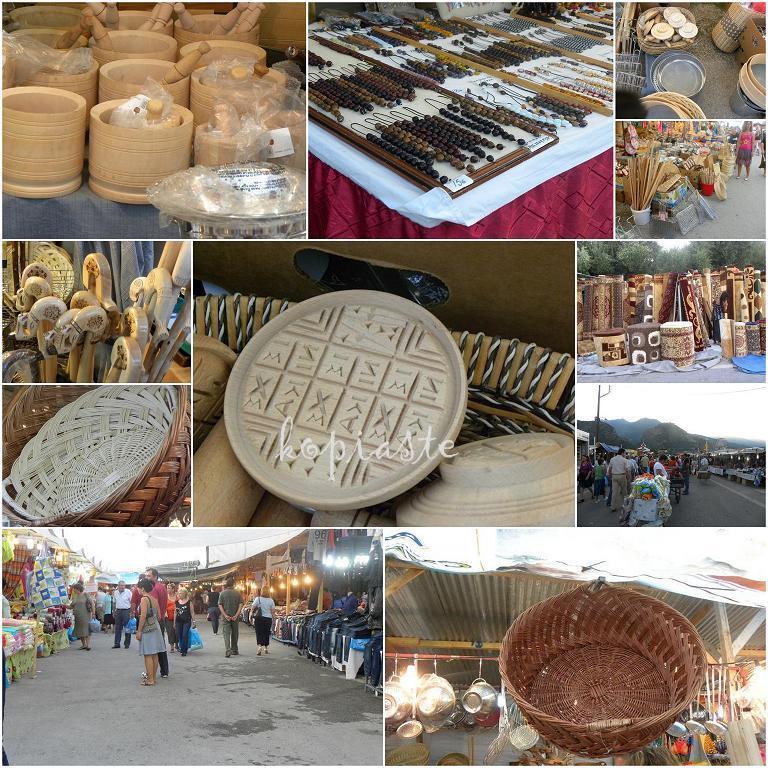 Two renowned products from Lakonia is pasto, also known as syglino, which is cured smoked pork and the other their orange flavoured sausages.  I usually buy both and preserve them together in olive oil. 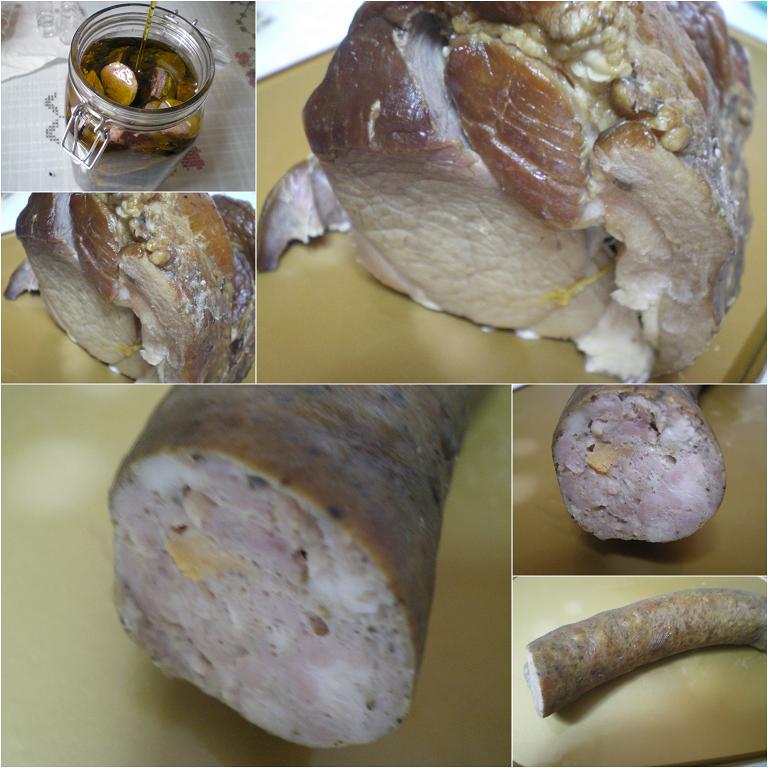 In the villages, when the pork is slaughtered they hang it for one day to dry and then they cut it in the middle and then into smaller pieces, about 3 inches wide each.  Each of these pieces is superficially scored and it is covered with coarse sea salt and left for five days in a wooden vessel so that the salt is absorbed.

The next step is the smoking part.  They are hung from the fireplace (for a week) or in the special smokers (for two days) where special wood like olive wood, cypress, or orange tree woood and thyme are used until the meat is smoked and dehydrated.They would then cook it and preserve it in the pigs lard.

After this procedure sausages and pasto are sold in local shops but in order to preserve it further in olive oil, you have to wash the meat to remove the salt and then cook it.

The meat is cooked only in olive oil and red dry wine. Orange peels are added as well as bay leafs, cinnamon stick, cloves, peppercorns and allspice.No salt is added, as the meat is still salty.

When it cools it is stored in clean jars and covered with olive oil.

You can then eat it as a mezes or in a lot of other recipes.

The most simple and delicious recipe to make is scrambled with eggs, also called Kagianas.

Remove the meat from the oil and cut it in smaller bite-size pieces. You can add some sausages as well. Saute it without adding any extra oil , add as many eggs as you like and season it with salt and pepper. 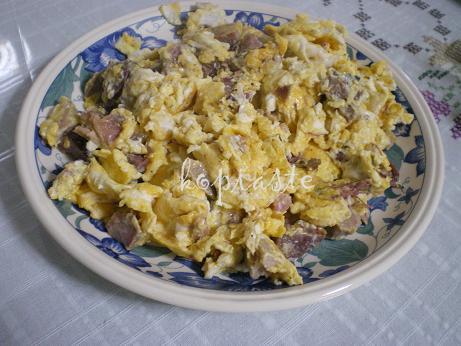 If you are anywhere near Mystras, do not fail to visit the beautiful village of Parori, on the the slopes of Taygetus, which is only 2 kilometres south of Mystras.    In a short walking distance of about 15 minutes from the village is the cave church of Panayia Langadiotissa built within a huge cave during the thirteenth century. 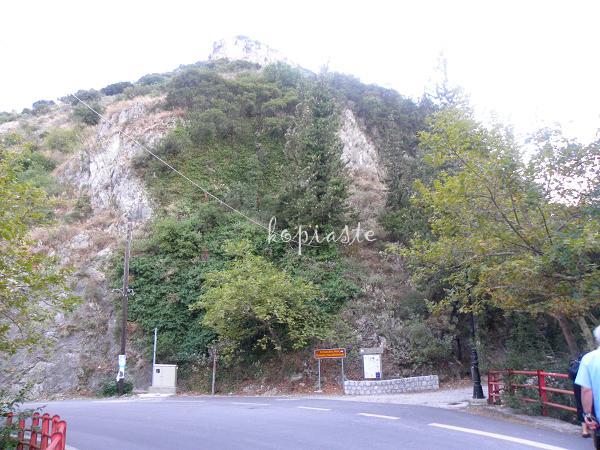 To get there you pass from a gorge, which is one of the two locations which claim to have been the infamous Kaiadas, where the Spartans got rid of the deformed and of the weakly.  The other location is towards the road to Kalamata.

The Byzantine emperor Constantine Paleogos prayed at this very church before leaving for his historical trip to Constantinople, four years before the fall of Constantinople.  This monument should not be missed for its originality and beautiful frescoes.  The church has a flat platform where you can sit and contemplate the panoramic view from there. 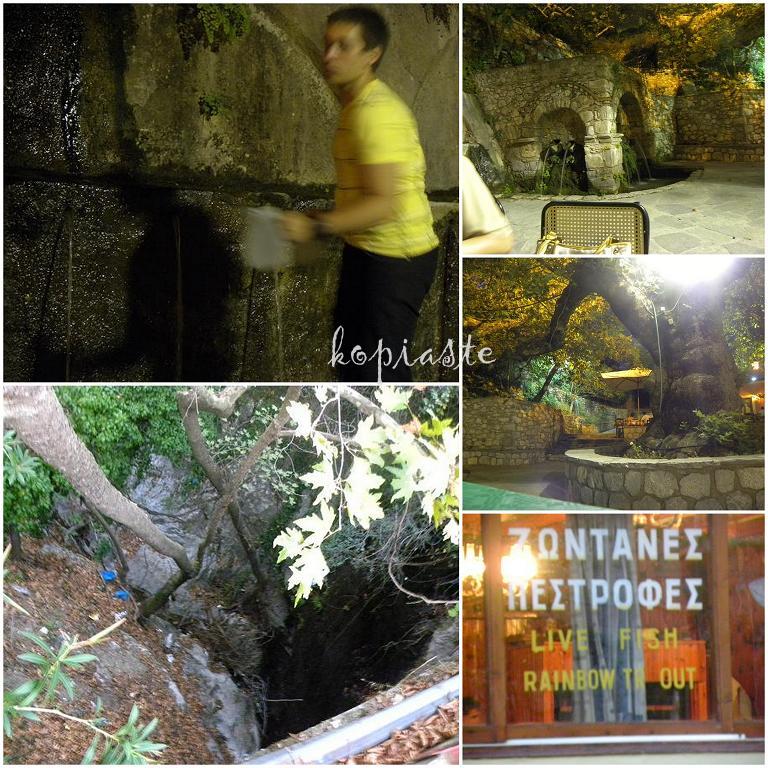 Parori also offers lovely restaurants, just by the junction to the church.  The taverns are situated among huge, aged platanus trees.   In the courtyard, water is flowing continuously from the mountain springs, where the waiters fill their water jugs and it is colder than the one we have in the refrigerators. 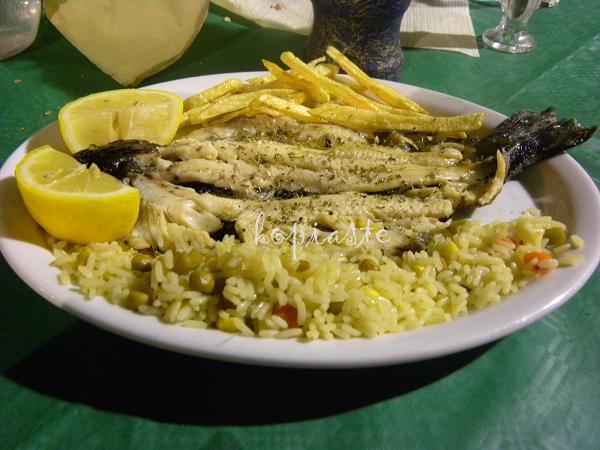 I forgot to make a note of the name of the tavern but I highly recommend it and must confess that we ate the most delicious and fresh grilled rainbow trout, for less than 10 Euros per person, including wine, salad and appetizers.

ivy, i tried to post something here but it didn't seem to work. trying again. just wanted to say that we went to mistras in january and it was heavenly. your post brings it all back. thank you! ;-) any advice about buying pasto in athens? i'd like to try cooking with it and preserving it as you explain. kali evdomada!

Hi Demetra. Unfortunately it is only sold in Lakonia. I am not sure where you can find it in Athens but I suppose you can check at the big supermarkets. I've seen it sold at Athens Airport.

hello ivy, always happy to see that you have a new post. ;-) i linked to this one as i have never cooked with pasto. have ordered it in a taverna but it was always heavy. would like to try it at home. i am assuming i can buy it in athens tho' i wouldn't mind a trip back to mistras--where we went in january and LOVED--to get some! do you have a suggestion about buying it in athens? thanks so much. kali evdomada ;-) demetra

~what a lovely informative insight with beautiful photos, ,"Thank you so much , for being so informative, I just LOVE your sight ,your recipes everything, I am greek married to a cypriot , will definetly be trying out lots of recipes, waiting for my husband to make an out door wood oven?I Havnt been to Greece but would love to visit now and cyprus as well keep up the awesome work you do ,

thanks for taking me through the Greek village once again! loved that fish platter...

I love these gorgeous photos, thanks so much for sharing!