Kladas is a small village just a few kilometres before reaching Sparta and that is where we usually stay when we visit our relatives. 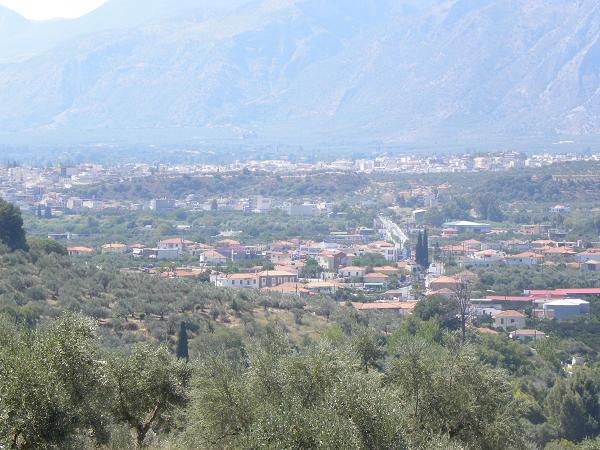 This is the view of the village from the house and the last buildings near the mountain, is part of Sparta. 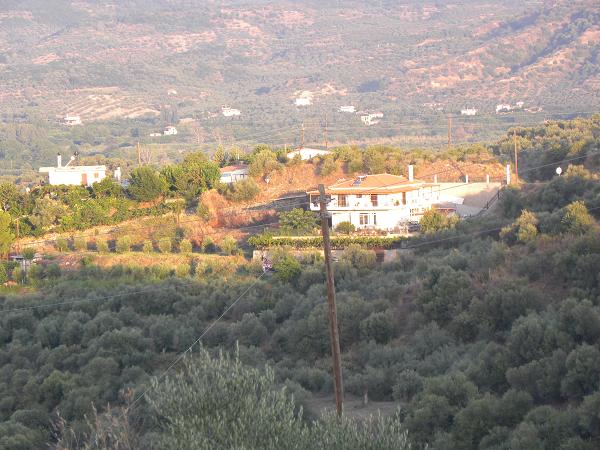 This is a view of the house

The village is now expanding and a lot of people prefer to build their houses away from the village on the surrounding hills.

Apart from their olive groves they have some other trees near the house such as fig trees, a couple of mulberry trees, a few lemon trees, a vine yard and the best of all is the cactus with the prickly pears.

They have a huge prickly pear cactus in the back yard which was loaded with prickly pears.  Prickly pears grow in most parts of Peloponese and the islands and its figs are known as frangosyka (French figs because they were brought by the Franks) or pavlosyka (Paul’s figs). In Cyprus, they are known as papoutsosyka (shoe figs) because the shape of their leaves resemble shoe soles. 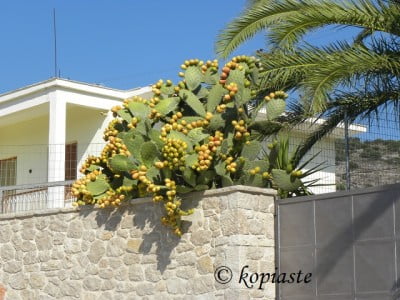 They are difficult to peel as they are full of hairlike spines but my sister-in-law had no problem peeling them with bare hands.   I love them especially chilled. 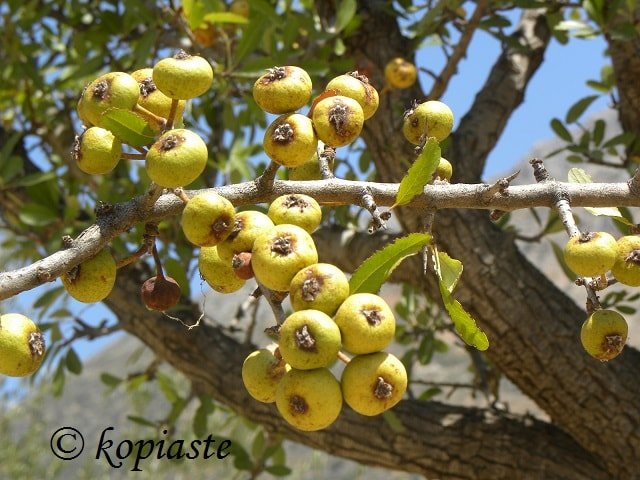 The tree in the above picture is a wild tree called gortsia, the fruit of which is called gortsa, in Greece and mosphilia / mospilia and mosphila / mospila or mespila, respectively, in Cyprus.   Ιt’s English name is Hawthorn and the scientific name is  Crataegus azarolus, commonly known as azaroles.  What I know is that you can graft it into a pear tree.  The fruit were not yet ripe, as they needed maybe another couple of months to ripen.  I haven’t eaten them since I left Cyprus but I remember the most delicious jam made out of this fruit. Actually two kind of jams.  One was made with the fruit and was quite dense and the other did not contain any actual fruit but after boiling them the juice produced pectin which would then set.  I preferred the one with the juice and on the boiled fruit we would sprinkle some sugar on them and eat them. 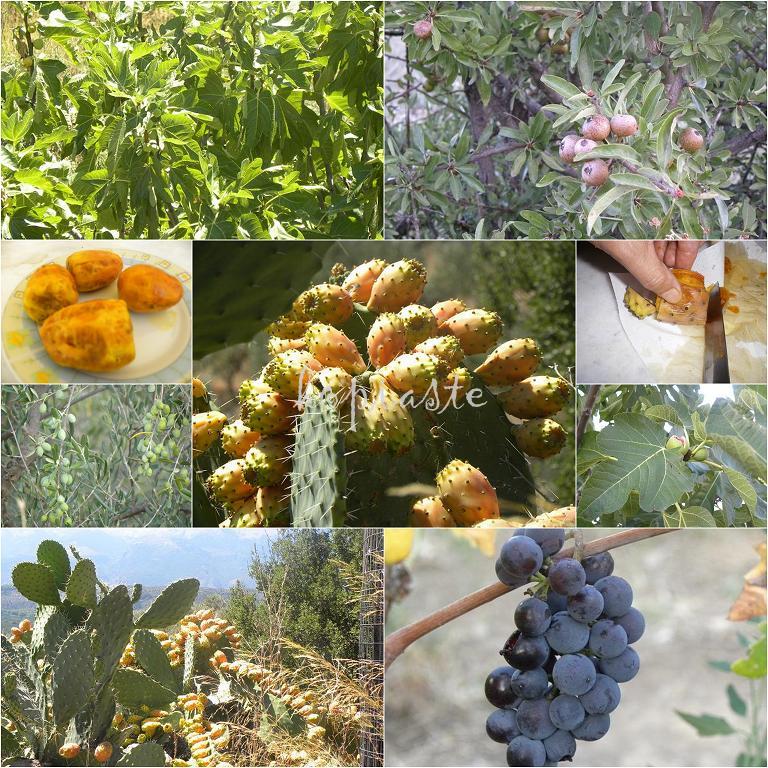 Behind the house they have a hen house with a few chickens, enough to give them fresh eggs for their grand children and some meat.

They have two dogs and countless cats, I counted six but there may be more.  My sister in law actually cooks them their own meal, apart from their leftovers, which nothing is wasted.  The vegetables go to the chickens and the rest to the cats and dogs. 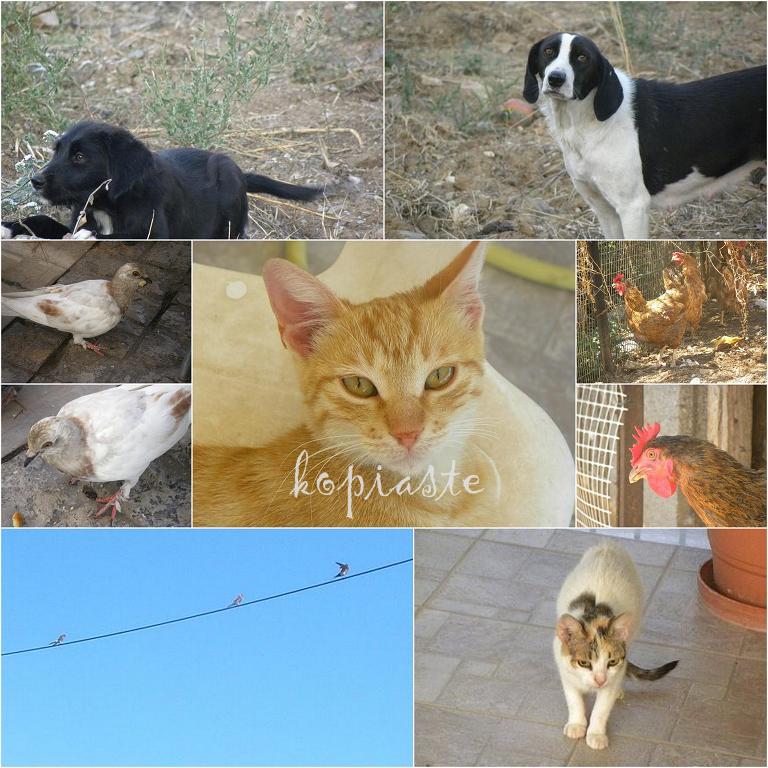 Most of their garden is full of flowers.  A few years back I remember they had tomatoes, courgettes, all kinds of vegetables and herbs. 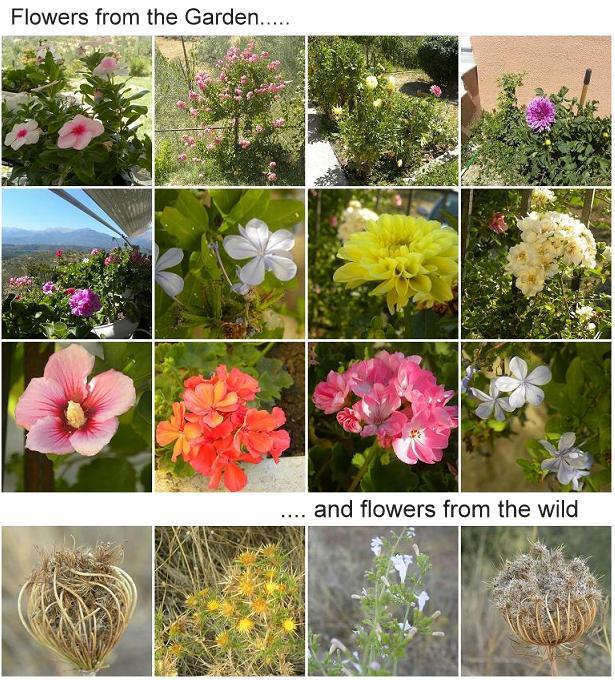 The only thing left in their garden is mint, which grows in abundance among weeds. 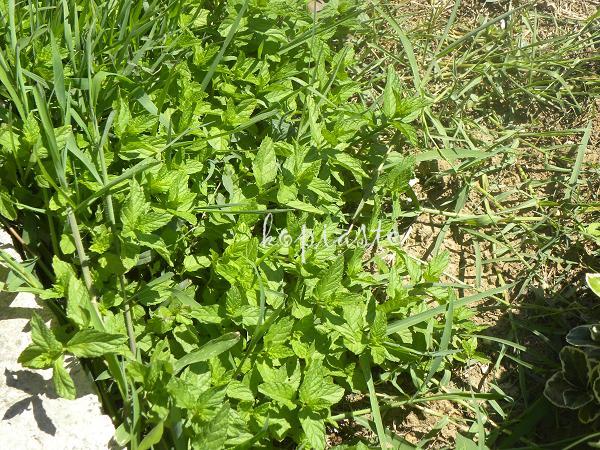 Before leaving, I made sure to bring a lot of mint with me.  The first thing I made was pesto. I used the mint fresh in salads and cooking and some of it I dried and some I preserved in olive oil.

As Martin Luther King said “I have a dream” only my dream is different.  I am dreaming that one day we’ll leave Athens and go and live in the countryside. 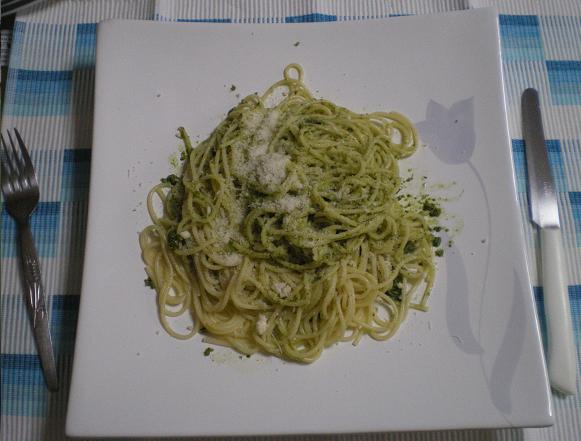 The simplest dish which I think does not need a recipe is spaghetti with pesto.  The spaghetti is cooked al dente, mixed with mint and almond pesto.  Top it with your favourite cheese.  Halloumi or graviera is great.

This is an older recipe but now I do not use cheese in the pesto nor on the spaghetti.

It’s difficult to please all members of the family, so I try to give solutions according to whatwe can all eat, with the less possible effort.The procedure for the first part of the dish is the same.  I forgot to take pictures when the dish was served but I’ve added another photo when I made it with spaghetti as well. 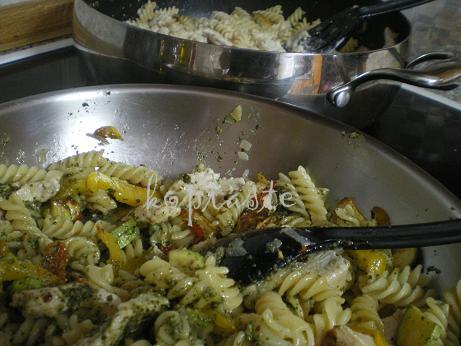 Healthful Fussili with Chicken, zucchini and pesto– Recipe by Ivy

Step one for both dishes:

Step one for both dishes. 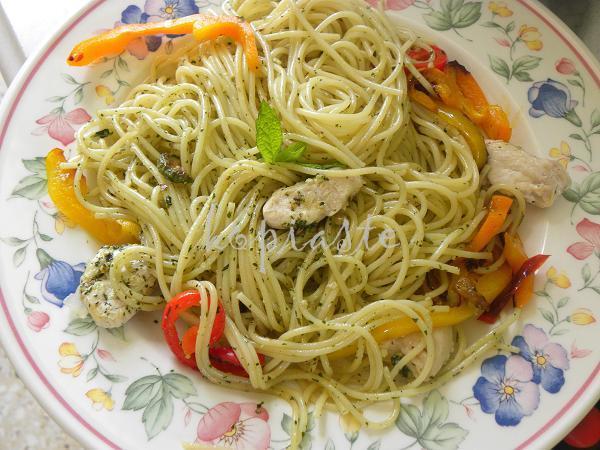 Summer Escapes Part III:  Issioma Karyon, Megalopolis
You can find many more Greek recipes in my cookbook “More Than A Greek Salad”, and “Mint, Cinnamon & Blossom Water, Flavours of Cyprus, Kopiaste!” both available on all Amazon stores.

Ivy, I likely passed by this horio on my way to Sparti. The region is beautiful (as is all of Greece) and I can just imagine that mint pesto.

I tried some of the mint in the garden of the couple where I was staying and I never tasted any mint so sweet!

I could live in a place like the one you described for ever Ivy! what a beautiful place with home grown & fresh produce. I envy them having so much fig in their home:-) We are planning to plant one in our yard & i will be happy if atleast i can grow one of them. & i thought the prickly pears are the things only in mexico & that region!! what abundance. we have a lot of those in Texas & recently saw tons of them with so much red/purple fruits, which i was so tempted to get.. but obviously not allowed to!! beautiful pasta! After I saw the mint pesto you made, I got inspired & made a basil one from my garden. & then obviously pasta with it.. will post it sometimes.

My post on your pesto post was meant for this post. I really don't know where my head is these days, LOL. But like I was saying before, country life can be so good, but as a good city boy that I am, I couldn't endure it forever, but it is a great way to forget about the city stress and eat great food, like the one you make :D

Please collect your gifts from my blog, dear...

Although it is early days for us, we are thrilled that we have grasped the chance and are living in the country! I haven't planted anything yet except some mint but I have big plans! I hope your dreams come true soon and maybe we might be neighbors!