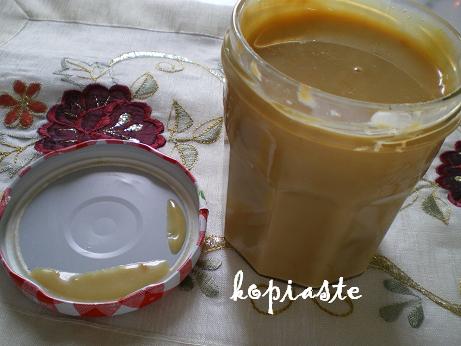 I have been seeing some recipes with Dulce de Leche but I didn’t know what it was until recently when one of you posted a detailed post on how to make it.  That is when I understood what exactly this is and how easy it is to make it.

Reading this link, I understood this post written in Spanish (I think) from the little Italian I know, that this is a traditional South American sweet, although its origin is disputed and it may have its origin from the Iberian Peninsula (Spain).    Dulce de Leche, meaning sweet milk, is a rich and decadent sauce or syrup, similar in flavor to caramel. Unlike caramel, however, which is made by heating sugar, dulce de leche is prepared by heating sweetened milk. The process is simple but can take a long time.

Unfortunately because it was so easy I did not bookmark the recipe and now that I wanted to place a link to the post I could not remember where I saw it.  I searched most of the sites I thought that might have posted this recipe but unfortunately I did not find who it was.  It wasn’t a post in which Dulce de Leche was in another recipe but it was a post just on how to make it.  If you are reading my post and you think I have made it from your post please let me know in order to place the link.

The recipe said that you have to boil a canned sweetened milk for at least three hours or more until the milk inside the can will caramelize.  That’s all I could remember.  At the beginning I put the milk in a double boiler but soon realized that it would never caramelize in three hours.  You should be careful to make two small holes, in opposite direction, to allow milk to evaporate and prevent any exploding of the cans.   As this procedure requires a long time to make it is best to make several cans simultaneously and then store the dulce de leche in jars, in the refrigerator.  I regret I made only three as it tastes so good that it is so addictive that you could eat it by spoonfuls. 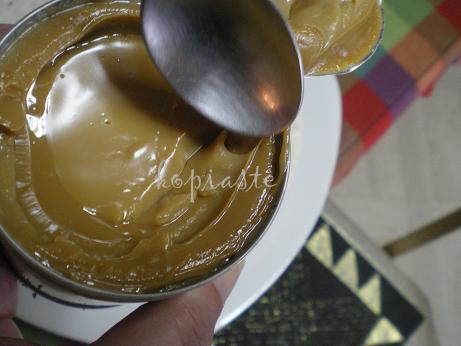 Make two holes on the cans in opposite directions.  Make the holes small, just enough to allow milk to evaporate.  Remove the labels, so that you don’t have a mess later on picking up the piece and place them in a pot. 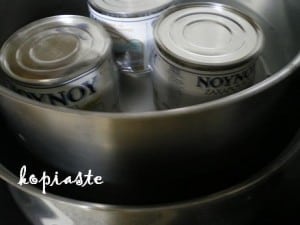 Keep adding hot water so that the level of the water is always the same and boil for about 3 hours.   If you leave it for three hours you will get a very dense dark caramel. 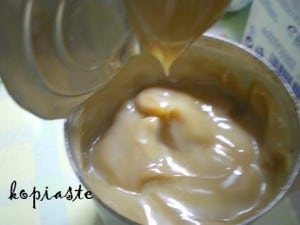 Note:   I forgot to open the holes in the cans and I was lucky not to have any accident but I knew that I should leave them to cool completely before opening the cans.

However, not making holes has an advantage as the dulce de leche may be left in the can for as long as you like. 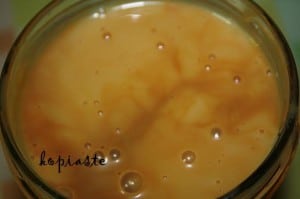 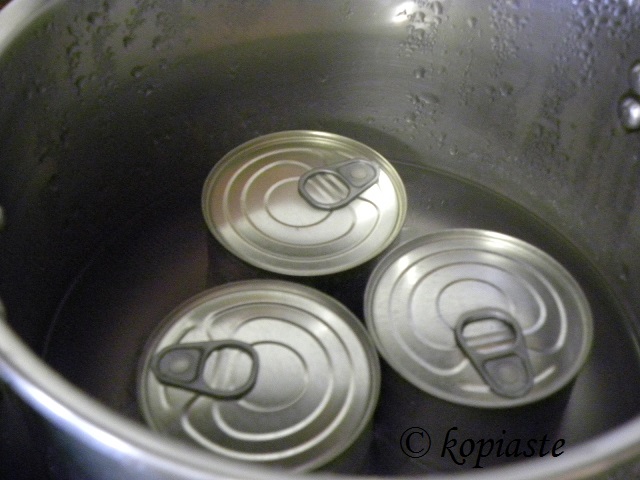 This time I made the dulce de leche in the pressure cooker.  I removed the labels and put some aluminium foil on the bottom of the pot so as not to make noise when boiling but also to avoid leaving marks on the pot.  When the valve started turning, I lowered the heat and let it cook for 1 hour.

I let it rest inside until it cooled completely and then opened the pressure coooker.

My partner is from centeral america and I have learnt how to make dulce de leche from scratch and it is quite simple, however time consuming. It is basically simmering full-fat milk with sugar and bi-carb soda until the milk evaporates into caramel.

yesss...i read about turning condensed milk into dulce de leche when i was little :-) It's like making coconut egg custard aka Kaya ( may try to blog about it later) only without coconut. I need to find good quality sweetened Condensed Milk in my country because of price hiked, the milk companies add in vegetable oil or palm oil and the taste is completely distasteful. Now, I only use evaporated milk in my tea...:-( Maybe I must learn how to make condensed milk myself :-)

I love dulce de leche! I have not been brave enough to make my own. I know what you mean about eating it with a spoon, it is out-of-this-world delicious!!

I have seen recipes around the blogopsphere to make this wonderful treat. I am waiting for one of my friends to make it so that I can give it as try since we don't eat very many sweets around the More Than Burnt Toast household. Dessert does show up around here on special occasions or when company comes over....I suppose any excuse at all despite my best efforts.If you were here I would make dessert.