28th October is ‘OXI or Ochi’ day, pronounced O-hee, meaning NO. No, is what Greece’s prime minister, Ioannis Metaxas, replied on 28 October, 1940 to Mussolini’s ultimatum to allow Axis forces to enter Greece and occupy key locations in the country, 1940 – 1941).

Thereafter, a relentless resistance followed by the Greeks putting up against the invading and occupying Germans, until liberation in 1944.

The six months of fighting caused by the Greek resistance of the Axis powers also delayed Germany’s invasion and campaign against what is today the Commonwealth of Independent States (the former Soviet Union). The fierce resistance of the Greeks in Epiros, Macedonia, Thessalia, Roumeli, Attiki, Peloponnesos, Crete, and the rest of Greece to the Germans caused delays. It overturned German plans to occupy Moscow before the onset of the heavy and deadly Russian winter.

This was something the Germans had not planned and thus were unprepared. The German war machine literally bogged down and froze. The Russians were successful in repulsing and defeating the Germans. This was a major turning point of World War 2. This signaled the beginning of the end of the German Third Reich. The sacrifice and success of the Greek armed forces, the Greek guerrillas, and the ordinary Greek citizens drew the admiration of the free world and kindled hope for the final victory of the Allied powers.

We should note that Greek Prime Minister Metaxas was also a military dictator. Yet the Greeks united behind the belief that the defense of their country, which they wished to become more democratic again, was very important. That is another symbolism and irony of the 28th of October 1940, that the Greek people not only fought the fascist Axis powers invading Greece, but also later fought the extremist forces that were trying to rule Greece and not allow it to be a democracy.

The Greeks faithfully met their obligations to their allies, with heroism and self-sacrifice. As a small country, the human sacrifice and mega-devastation Greece suffered in World War 2 were much more than those of the almost all other countries that were on the victorious Allied side. In World War 2, Greece lost one of the highest percentages of its population in comparison to the other members of the victorious Allies. Greece lost, on a percentage basis, about 12% of its population, meaning about one million people.

The world leadership of the time, including Franklin D. Roosevelt and Winston Churchill, recognized the decisive contribution of the Greeks. The timeless character of the modern Greek was shining brightly for all to see: passionate, determined, and proud.

British Prime Minister Winston Churchill said of the Greeks: “Today we say that Greeks fight like heroes, from now on we will say that heroes fight like Greeks.”

Today is a public holiday both in Greece and Cyprus and in every corner of Greece there will be celebrations with parades. 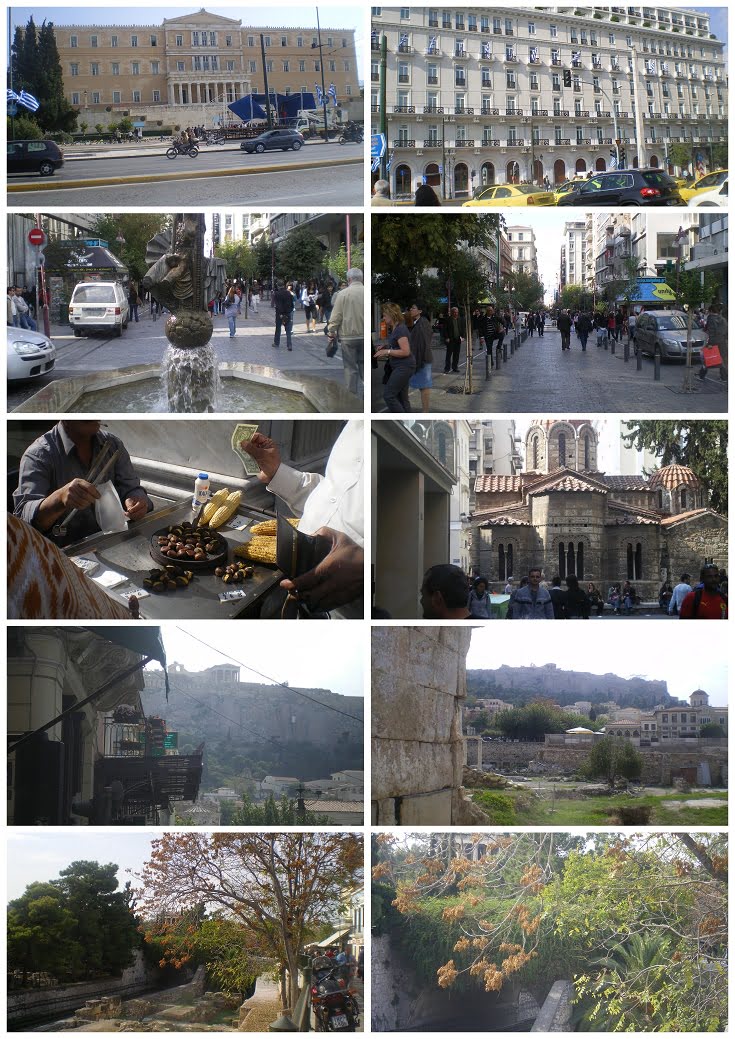 Yesterday my husband and I went to the city centre where you can see some pictures and follow our stroll from Syntagma Square, through Hermou Street, the most commercial road of Athens with all the shops, to Monastiraki and finally sitting at a Mezedopoleio (selling mezedes) called Dioskouri, near Thisseio.

The weather was great and the streets were packed with tourists all over the world. The coffee shops and tavernas were full as it was lunch time when we arrived there. 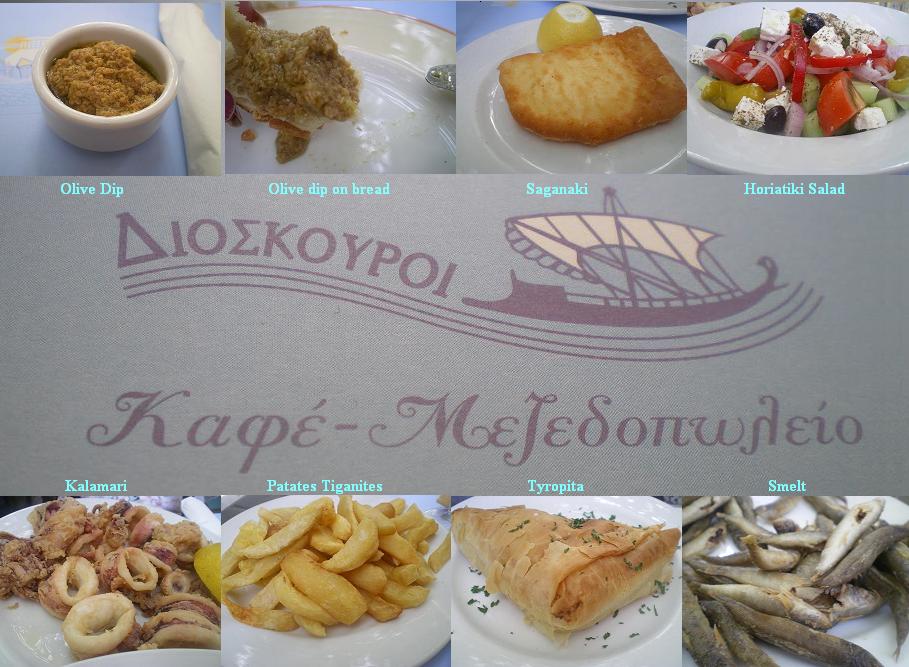 The food was not bad and more than enough to feed four. The Horiatiki salad had tomatoes, cucumber, red bell pepper, olives, feta, some capers which are not visible in the photo and some pickled green peppers. I am not sure what these peppers are called but I think they may be jalapeno peppers, which have a slightly warm, burning sensation when eaten. I could eat just the salad and need nothing else but my husband kept ordering and ordering things. The olive dip was fantastic. I ate it all by myself. The kalamari, potatoes and smelt were good but I cannot say exceptional and the tyropita although it looks delicious we just tried a little piece and left the rest. 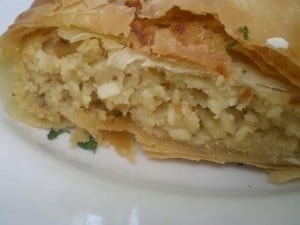 The cheese in side was not even visible and it was mixed in a bechamel cream and something which resembled like bread crumbs.

The price was not bad at all. Considering that we were in the most touristic place of Athens, 50 Euros for all that, plus 1/2 kilo white wine and a coke was quite cheap.

If you want to make this tyropita yourself, here is what you’ll need: 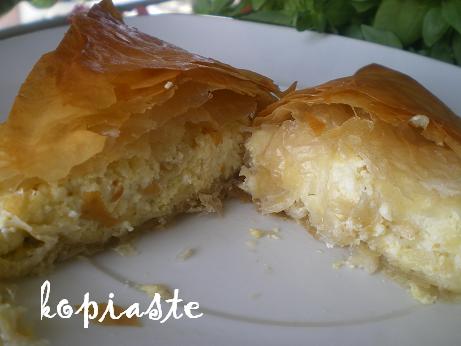 Press cheese with a fork to crumble and add egg and mix. Depending on the size of the eggs if the mixture is not very creamy, add another one.

Open a phyllo sheet and sprinkle a spoonful of olive oil which brush to oil all the phyllo.

Add another phyllo on top.

Place filling on the top centre of the phyllo and fold left and right sides towards the centre.

Start folding into a triangle shape until all the phyllo has been folded. Grease a baking tin with some olive oil, place tyropita and brush some extra olive oil on top. 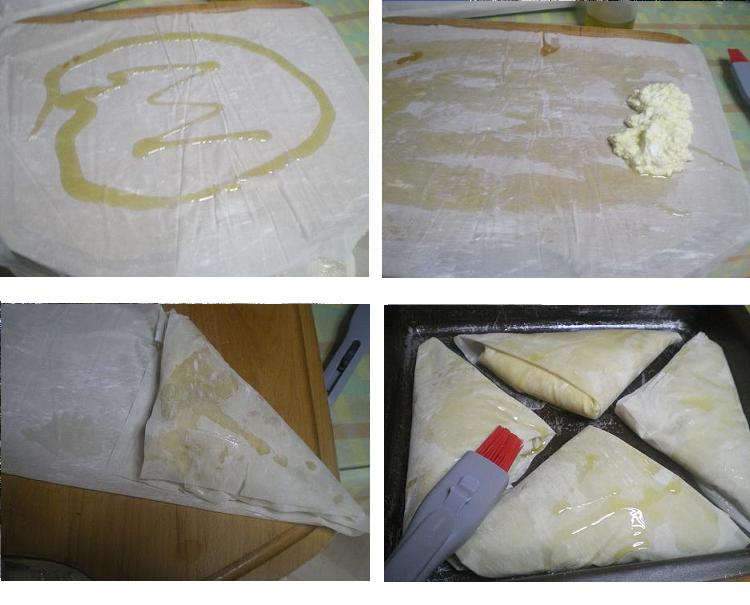 Bake in a preheated oven to 180 degrees C, for about 35 minutes until the phyllo turns golden brown. 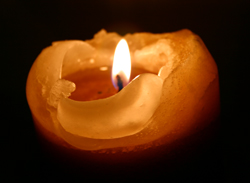 I am not sure if you know about this, most of you may probably know by now, but late last evening, before closing my computer, I checked my e-mail and found an e-mail from Bee, of Jugalbandi, informing me that Bri has passed away. May God rest her soul.

I was intending to post something for the Breast Cancer Awareness Event tomorrow but because of the news I wanted to post it today, so I connected it with my post. 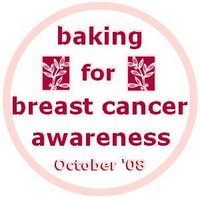 I am submitting this recipe to Leyof Cilantro & Lime who is hoping to promote awareness of breast cancer and its effects by posting information about it on her blog and drawing attention to the issue through our participation in her event Baking for Breast Cancer Awareness .

Great post. The recipe looks amazing and I bet is very delicious.

Having served with the Detachment 15, 2140th Comm Group in Lefkas, Greece, in 1977, I had a chance to observe their Ochi Day. I was impressed with the celebration. My 12 months in Greece are filled with lifelong memories of one of the best assignments I had.

Never heard of this Detachment but I am glad you have lovely memories of Greece.

sorry...and god bless bri! and thanks for a this short history lesson!

Sorry to hear about Bri. She was very brave throughout & fought till the very end. My thoughts are with her family & friends...may she rest in peace.

Ivy I very sorry to hear about your friend.

Thank you for sharing with us this history very important to remember these events. Your Tyropita looks amazing :D

I must look up this event - Baking for Breast Cancer Awareness