The formula to make an Orange or other Citrus liqueur, such as lemons, bergamot, mandarin, bitter oranges, pomelo, etc is very simple.  You take the peel or zest and steep it in alcohol to extract the essence of the fruit.  Then you make a simple syrup with sugar and combine both together. 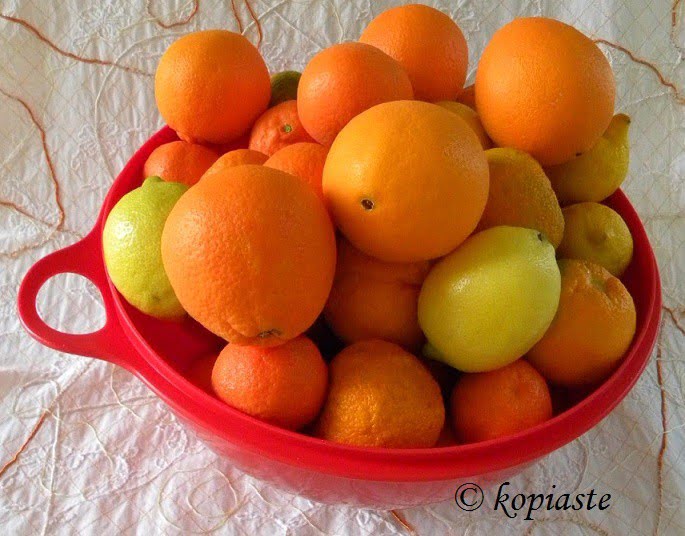 Although my husband comes from Arcadia, all his relatives live in Sparta, Lakonia. Sparta is situated on the foothills of Taygetus Mountain and is the centre of an agricultural plain whose focus is the Eurotas valley. It is the local centre for the processing of goods such as citrus and olives. Recently, it has invested in one of the largest and most modern fruit juice production and conditioning plants in Greece, and has built up a reputation of excellence for its orange juices, produced from Lakonia oranges. 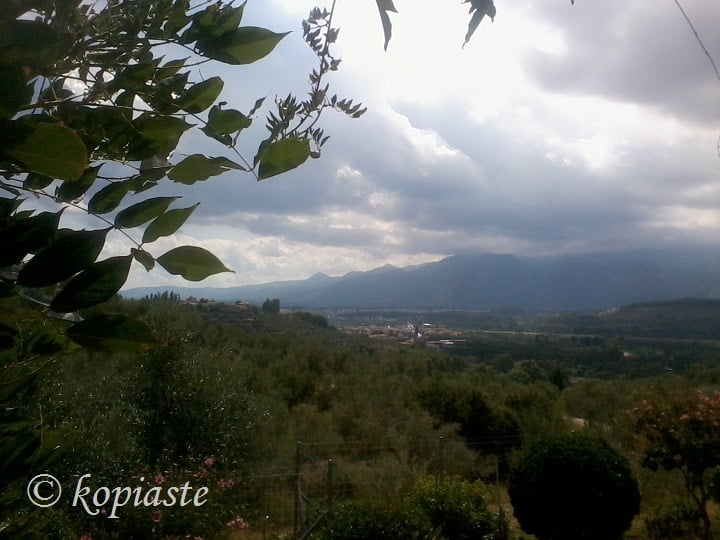 View of Taygetus from their back yard

My in-laws who live there have both orange and olive groves. The production is just for their personal use and whatever extra they have they give around to friends and relatives. Each time they visit us they bring along some of their produce.

Greeks are very hospitable people and when you are friends with them whenever the occasion arises they will send you some of their home made or home produced products. We also have some friends from Crete and during the past years my eldest son, who is a student, has been working during the summer time in Cretan hotels. Whenever he used to come home on his days off, for a couple of days friends would send a bottle of their famous tsikoudia.   Tsikoudia is their local drink made by distilling the leftover pomace after making wine.  Whoever has been to Crete before knows that wherever you go, you will be offered a free drink of tsikoudia. So I have many bottles of tsikoudia from Crete and my relatives from Cyprus have also been sending me the Cypriot equivalent which is called Zivania. 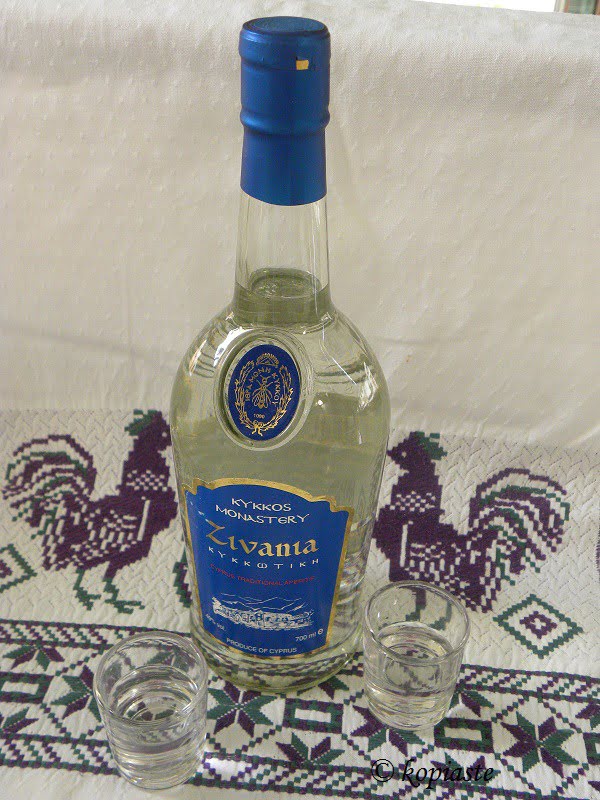 The ones I have from Cyprus are produced in wineries whereas the ones from Crete are distilled in home distilleries. I’ve had them in my cupboards for months now not knowing what to do with them as we do not drink a lot in my family except occasionally my husband drinks some wine and ouzo.

The last time my sister-in-law visited us with her family they brought along a big carton of oranges which were too much to consume so I wanted to squeeze some into orange juice. 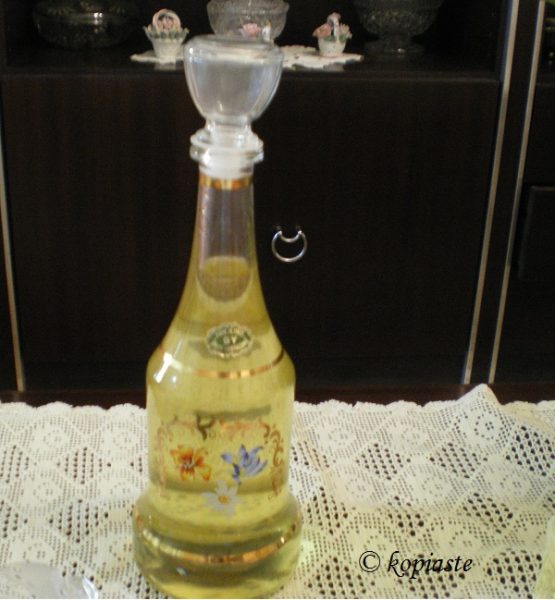 When squeezing the oranges this great idea came up. To combine both oranges and tsikoudia and make an orange liqueur.

I remembered seeing this procedure last year on television and searched my cooking notebooks to see if I had recorded it.I had listed the ingredients but the notes on the procedure were a bit vague so I decided to see more recipes on the internet and get everything clear before proceeding.

The procedure proved to be a very easy one, as the only thing needed was to put the orange peels in the liquor for at least fifteen days and then prepare a syrup and mix it with the liqueur. 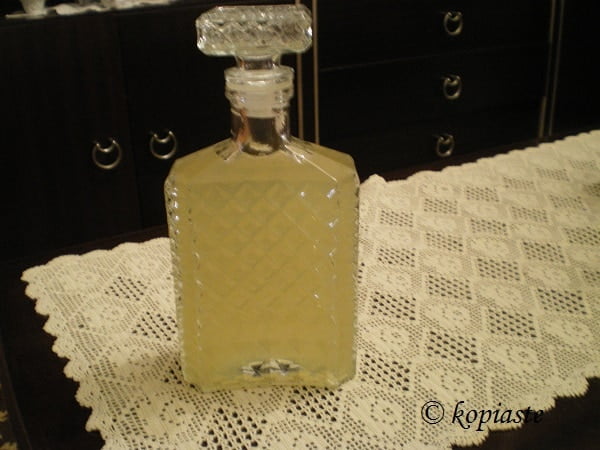 So easy and you get a pure, natural orange liqueur which is a very mild drink by itself or you can make use of it in sweet and savory dishes.

Reading about liqueurs I learned that orange liqueurs are also called triple sec and the general principle of liqueur-making is to take an alcohol base (sometimes called “neutral spirits”) such as vodka, ouzo, tsikoudia, tsipouro, zivania, raki or whatever neutral spirit your area produces and steep a flavoring in it for a time. Next, filter out any remaining solids, add sweetening, and age. Finally, bottle and serve. Every recipe is different, and many have somewhat different procedures, but they each pretty much come down to that and each flavor creates its own dynamics over time.

For my liqueur I used the peel of four oranges which I put them in a coffee/tea jar, which had a filter on the top, filled it with tsikoudia and pressed the filter down so that the peels would submerge into the liquor. 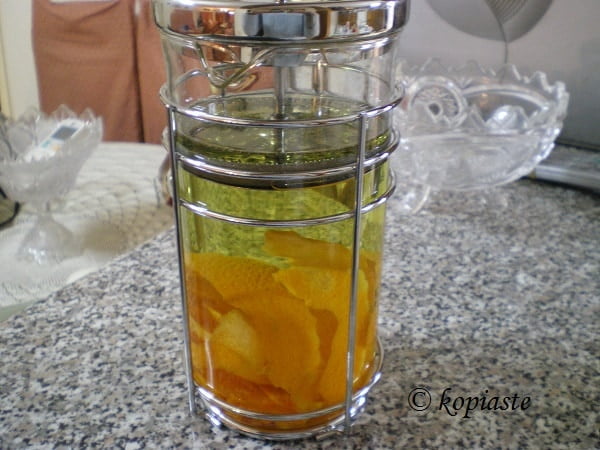 I also made a bergamot liqueur.  However since I wanted the peels to make a Bergamot Fruit Preserve, I made the liqueur exactly the same way only instead of using the peels I used the zest of the bergamot.

Any other citrus can be used.  Smaller ones like mandarins or kumquats are added whole in the liquor. 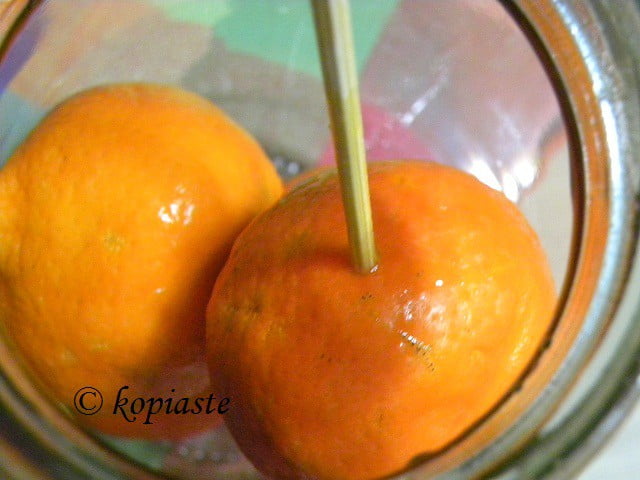 Orange or other Citrus liqueur 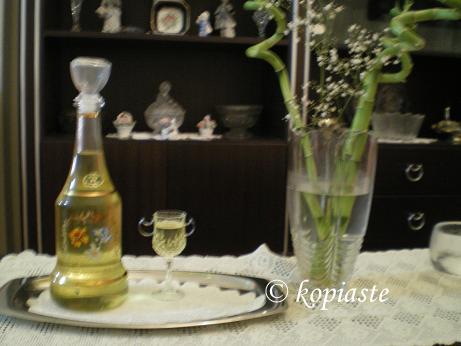 After making the Coffee Liqueur using leftover syrup from a Cherry spoon sweet, I’ve been using leftover fruit preserve syrups a lot when making liqueurs and the flavour is even better!

Andrea, making liqueur is really easy and you can make some with nearly any fruit so long as it has a nice aroma.

This sounds fabulous and easy, something I will have to try sometime! I would love to have my own citrus trees, but alas they do not grow in my region due to the cold. Thanks for participating in Grow Your Own!

Good morning starshine! I came to see the pic. you mentioned but I can't find it... maybe I'm late?Thanks anyway. I appreciate it.

Susan, I am now making a mandarin liqueur (what an aroma!!) but limoncello has been in my mind for a long time now. Still got many bottles of liquor to make. Have you posted about limoncello?