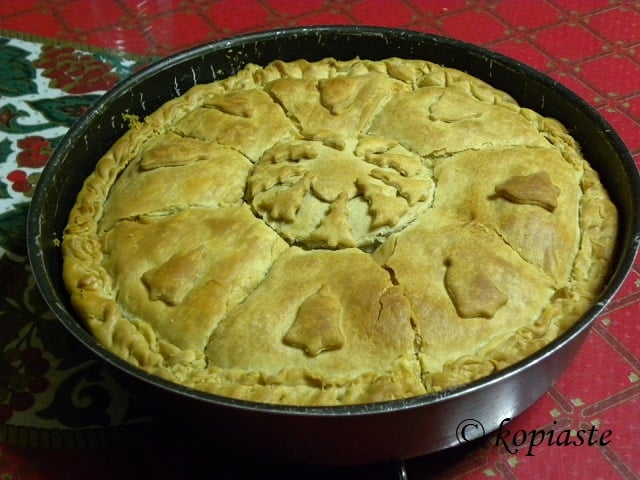 Greek pites (pies) with homemade crispy phyllo that you can adapt for your needs, depending on what ingredients you have available.

Pita, plural pites (pies) are a staple part of Greek cuisine and the philosophy behind “pites” was that the housewives used whatever leafy greens they produced in their gardens, some cheese and some homemade phyllo and they made one of the most delicious food one can eat.  The most popular is of course is spanakopita (spinach pie) but believe me that there are innumerous kinds of “pites”such as “kreatopita / meat pie”, “kotopita / chicken pie”, “tyropita / cheese pie”, “kolokythopita / pumpkin pie”, “manitaropita / musthroom pie” and many more, each one being better than the other. 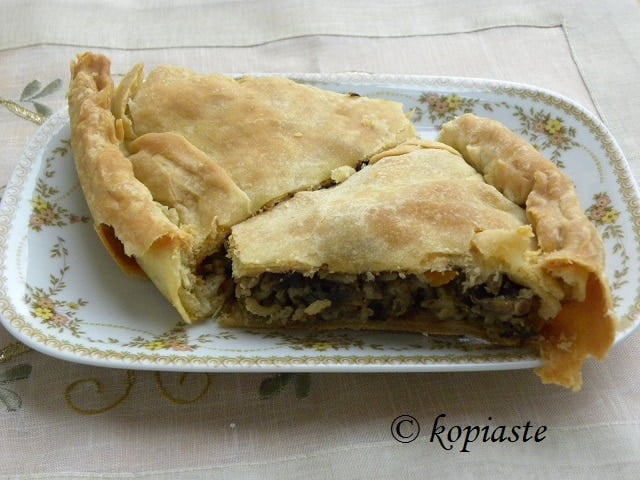 This is also how this “pita” came to be.   Last month when I visited my children in Athens, I found in the refrigerator a box of mushrooms which were forgotten in the refrigerator for quite a long time and if they stayed a couple of more days they would defionitely end up in the trash.    I decided to make a mushroom pie for them but the mushrooms did not seem enough, so I knew I would find some frozen bell peppers in the deep freezer, which I used.  When sauteing the mushrooms and the peppers they gave off too much water, so that’s when I decided to add the rice in order to absorb all the fluids and that added extra flavour.  I had some aromatic jasmine rice which I used but you can use any other starchy rice you like or even bulgur will do.  I used feta because there is always some feta cheese in the fridge but you can use any other hard cheese you like.   Graviera, kefalograviera, kefalotyri or halloumi is another good choice of Greek cheeses but you can also use pecorino or gruyere if you cannot find Greek cheeses or any other hard cheeses you like. 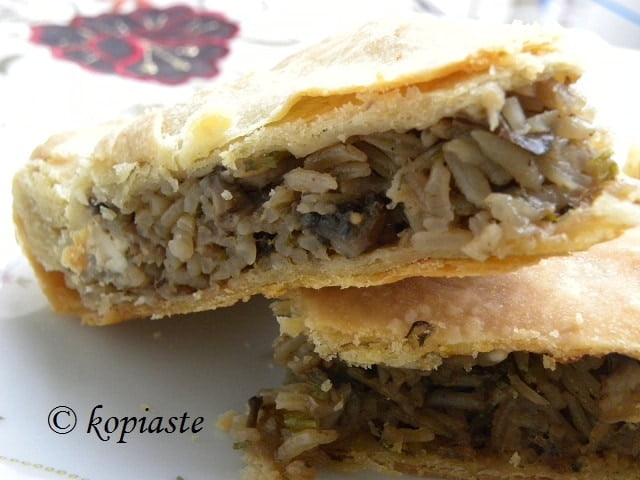 When I was making this pita I was not planning to post the recipe, as I have already posted a Mushroom Pie before, so I did not bother to take any pictures.  However if was so delicious that I wrote down the ingredients before forgetting them and fortunately there were two leftover pieces which I took some pictures the following day.   When I made the dough I did not measure the ingredients so I had 5 phyllos but in the recipe given to you, you can make at least six.  If you do not want to make your own phyllo from scratch you can use store bought phyllo instead but of course it’s not the same thing.

Some times when I have some leftover pieces of dough I use it to decorate the pie.  The first picture above is actually a Meat Pie (a future recipe to post) which I made during Christmas, and  I used a cookie cutter to make the designs.

Here’s one I made with store bought phyllo and instead of rice I added bulgur wheat in the filling. 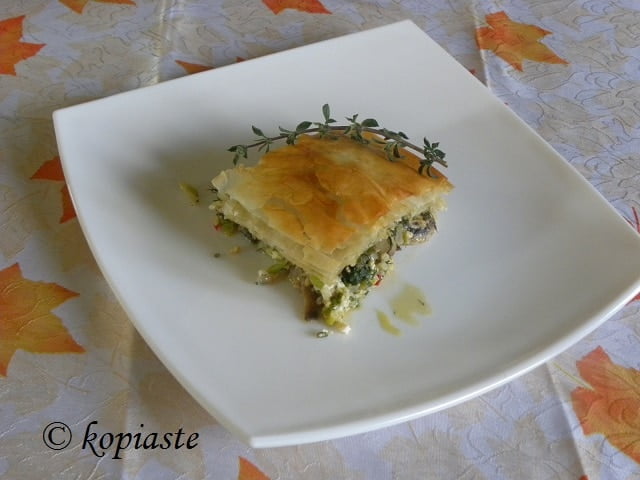 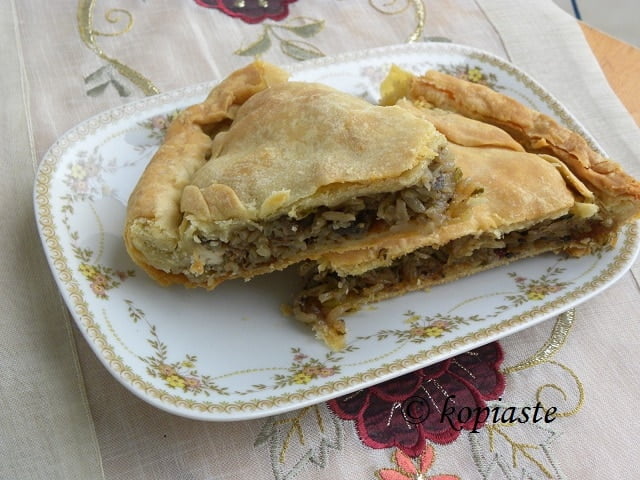 Your phyllo pastry is delicious! I tried it and it was perfect! I love Greek pies and this one looks soooo Good!!

You did the right thing by taking notes. I sometimes forget and then when the result is good, it's hard to replicate. Sometimes great dishes are the result of serendipity.

Oops! I was still writing but pressed the wrong key. I was saying that sometimes great dishes are the result of serendipity, though of course you also need some good judgement.

wow! am always amazed at your flexibility at cooking and turnung everything into a perfect dish. Looks delicious. I am so afraid to make phylo. Maybe I should dare to do it once :-) best wishes!

What a great way to use up leftover mushrooms Ivy...pitas are just the best!

Ivy, this looks like a perfect vegetarian lunch for me. The crust is irresistible.