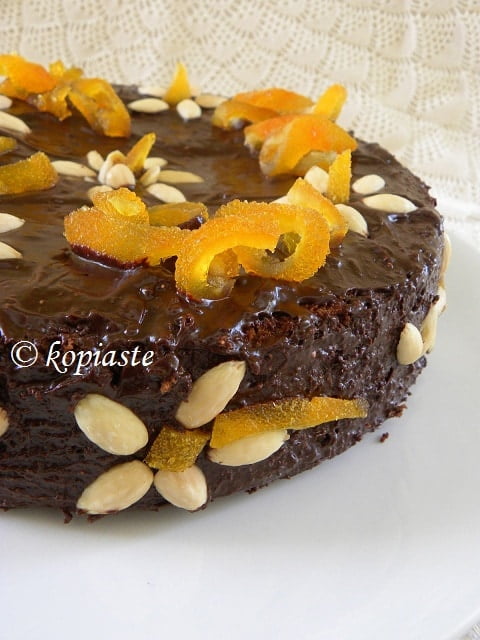 Can you believe it has been five years since I started blogging?  I myself find it hard to believe that I made it so far.  I am an Aries and Aries tend to get bored very easily but although there are times that I do feel tired of blogging, I seem to be hooked with it and keep it going thanks to all the wonderful people I have met during these past five years. 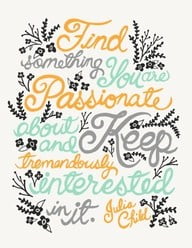 I am taking a short break from blogging and since my blog anniversary is this month, I am celebrating the anniversary a bit earlier as I am not yet sure if I will be able to post again soon. 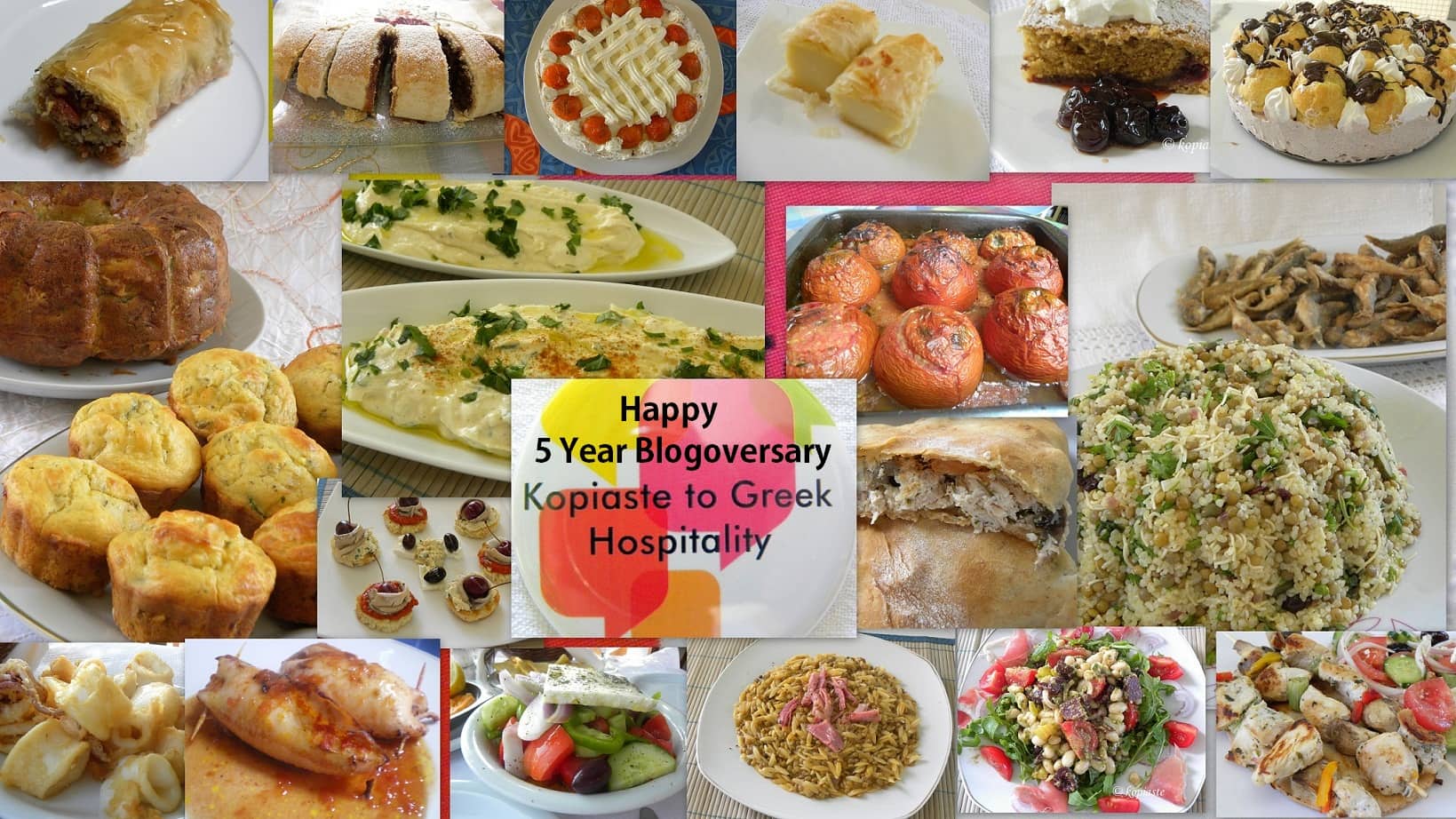 I was planning to make something special to celebrate and recently when I joined a new group called Baking Partners, where we will be learning new techniques, our first attempt to bake, was this amazing Reine de Saba avec Glaçage au Chocolat (Julia Child’s Queen of Sheeba Chocolate Almond Cake), in honour of Julia Child’s 100th birthday anniversary. 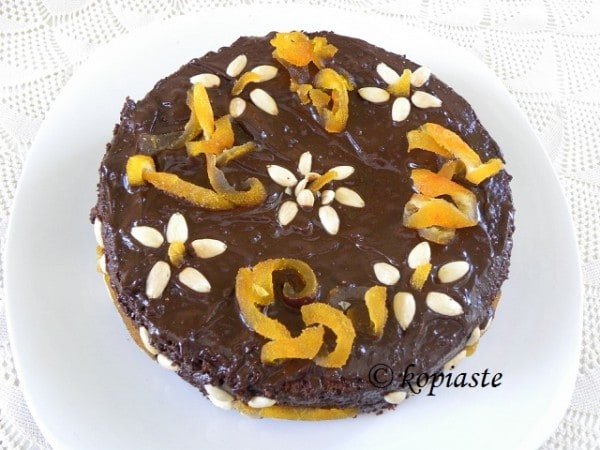 This chocolate cake is baked so that its center remains slightly underdone. It is covered with a chocolate-butter icing, and decorated with almonds. Because of its creamy center it needs no filling.

The recipes given to us were for an 8 or 9 inch baking pan.  The smallest baking pan I have is a 10 inch pan, so I made my own adjustments to the recipe.  The recipe calls to add rum or coffee in the cake but also in the chocolate icing.  I added some of my Cherry Espresso Coffee Liqueur which has rum in it and  I also enforced it with more instant coffee.   I also added powdered polo mints as well as peppermint in the chocolate icing, which added an additional lovely taste .   I did not have almond extract, so instead I added vanilla.   On top,  I decorated the cake with bitter orange fruit preserves and almonds.

The technique in this cake is not new to me as I have baked similar cakes in the past.  This recipe was written in 1961 and a few things have changed since then.  I remember my first Braun Mixer when I got married, it had two bowls where the smaller one was to whisk the egg whites separately.  This method was done for many years.  I now have the Kenwood Master Chef which is a very powerful mixer, so I’ve stopped using this method since I bought it 3 or 4 years ago.  In the recipe I have used the old method.  I have also stopped greasing the baking pan with butter and then adding flour.  A piece of parchment paper makes miracles. 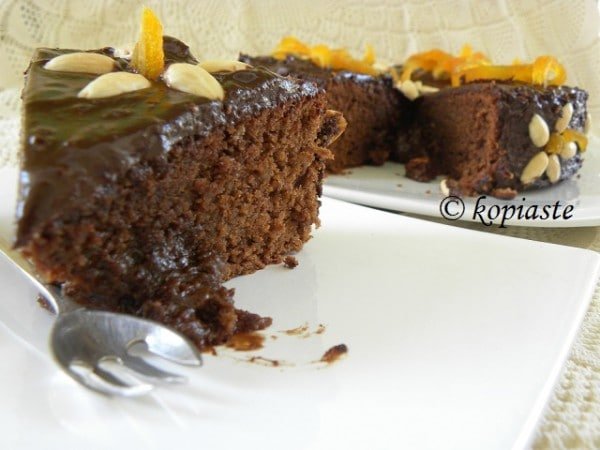 The cake was good.  It was moist, dense and luscious but too rich for my taste.

The instructions given to us were not so clear.  If I was not an experienced cook, I don’t think that I would get it right from the first time.  It says to check the recipe 2 to 3 inches from the edges, which is quite close to the centre (for an 8 – 9 inch pan), until the toothpick inserted comes out clean.  The baking time was 20 minutes and since my dose was bigger,  I started testing the cake after 25 minutes not close to the centre but an inch from the edges and it came out very wet.  I tested it again after 30 and 33 minutes in order to get it out clean after 34 minutes.    After glazing the cake it started sinking in the middle and did not make a good presentation.  The recipe said to glaze the cake after 1 or 2 hours.  I think that these types of cakes should be cut and enjoyed while still warm, which is what we did. 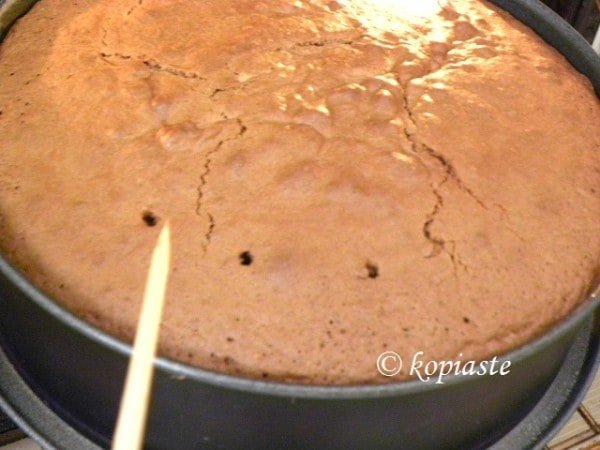 Line a 10 inch (26 cm) spring form cake pan with parchment paper and butter the sides of the pan.

In a spice grinder powder the polo mints together with dried mint.

Sift the flour and add salt, lemon zest and pulverized almonds and mix.

Melt the chocolate with rum (or instant coffee dissolved in hot water) in a double boiler and set aside. Mix in the almond extract and continue mixing until lukewarm.

In your mixer bowl cream the butter and sugar together for several minutes until white and fluffy.

Add the egg yolks one at a time until incorporated.

Add the melted chocolate into the butter and sugar mixture.

Beat the egg whites using a hand mixer or a balloon whisk, together

with lemon juice until stiff peaks are formed.

Lower mixer speed to minimum and add the flour mixture, alternating with half of the meringue.

Turn the mixer off and using a rubber spatula, delicately fold in the remaining meringue, until incorporated.

Turn the batter into the cake pan and gently bang it on your counter, so as to spread evenly.

Bake in the middle level of preheated oven for 30 - 35 minutes.

Cake is done when puffed to the top and a knife or skewer inserted 1 - 2 inches from edge comes out clean. The center should move slightly when the pan is gently shaken. Remove pan to a rack and let cool 15 - 30 minutes.

Run a knife around the edges of the pan, release and remove the spring form the side and reverse cake on your platter. Remove the parchment paper from the cake.

In a double boiler, melt the chocolate with coffee and espresso liqueur. Add powdered polo mints with dried mint. Remove from the double boiler and mix in butter until incorporated. Keep mixing until it becomes shiny and spreadable.

Immediately spread some on the sides of your cake and the remaining over your cake with spatula or knife.

Decorate with blanched, roasted almonds and citrus fruit preserve, such as orange, bitter orange, bergamot or other.

1. Sponge can be made 1 day ahead. Cover cake with cling film and store at room temperature. 2. *If you do not have cake flour, add 1 tbsp corn flour (starch) and weigh adding all purpose flour until it reaches 115 grams. 3. *I dissolved 2 tbsp instant coffee with 2 tbsp hot water and mixed it with the espresso liqueur. I used half of it in the cake and remaining in the icing.


If you also want to enhance your baking skills, you can also  become a member of Baking Partners! 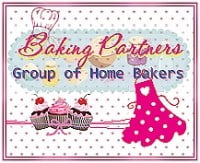 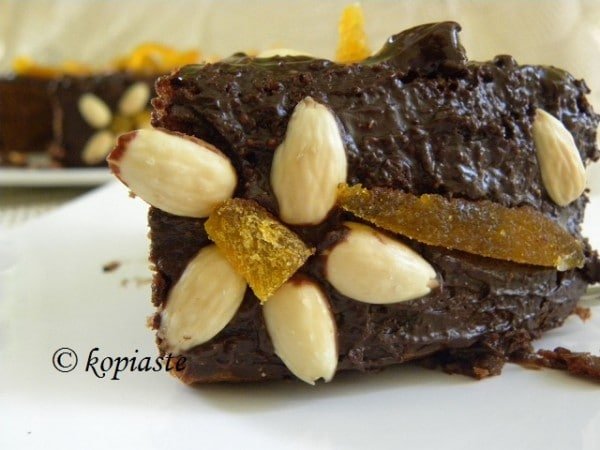 Happy blog anniversary, It is wonderful to blog continuously for 5 years. Thanks for your excellent work. Keep blogging.

Congratulations on your 5th year and I commend you for coming up with the best recipes, this cake looks delicious and I can’t wait to try it out :)

Congratulations for the 5th anniversary of your blogging. I liked the design of your very delicious cake. Thanks a lot for sharing such a wonderful post.

Happy Anniversary and Keep up the Great Work! I personally love almonds, this variety is so easy to work with. Thanks for the share!

Congratulations on your 5th year and I commend you for coming up with the best recipes, this cake looks delicious and I can't wait to try it out :)