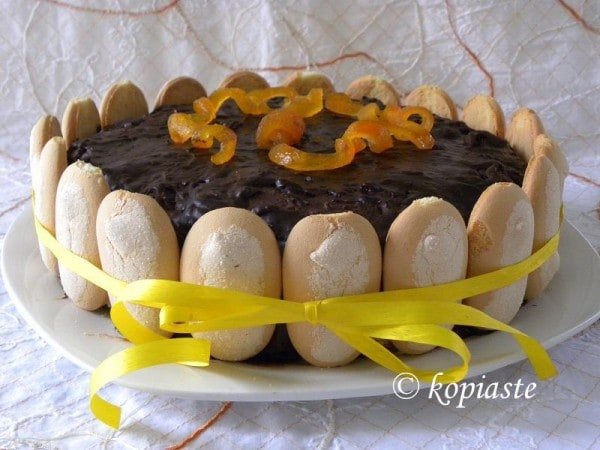 A few weeks ago I was talking to my son, who is in England, on Skype and I cannot remember how but we started talking about Jaffa Cakes.  These are like biscuits (but are actually cakes), the first layer being an airy sponge cake, an orange jelly in the middle and covered with chocolate on top.  I used to love them when I was a child and lived in England, then years later I found them in Cyprus, the original ones by McVities.  Here in Greece there is a local brand which makes similar cakes. 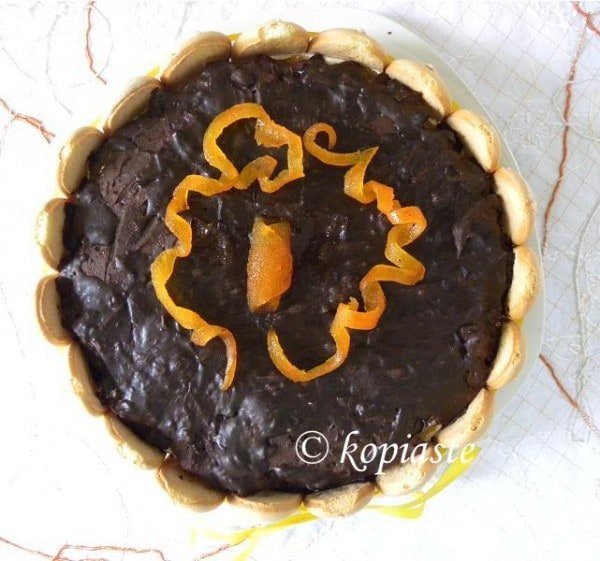 I remembered that I still have a lot of citrus spoon sweet and citrus marmalade in the closet, which I made couple of months ago and suddenly it struck me to use it and make Jaffa Cakes.  I bought some Savoyard biscuits to experiment with but I didn’t get the chance to make them because the children kept asking me for other things to make.  After making Elia’s birthday cake, I started thinking what to make for my birthday.  I couldn’t get those Jaffa Cakes off my mind and started planning the idea of making one giant Jaffa Cake, as a birthday cake.  I even thought of using my pizza tin to make a huge Savoyard but then I rejected the idea as it would be too thin and in any case it was a birthday cake and I wanted to add some cream inside as well.

As I said in my post for Nafplio, we shall soon be relocating to a small village called Asini, which is about 7 km from Nafplio.  The prefecture of Argolis produces a lot of oranges, so last week when we visited Naplio and Asini, on our way back we bought 25 kilos of Merlin (navel) oranges for 5 Euros!! 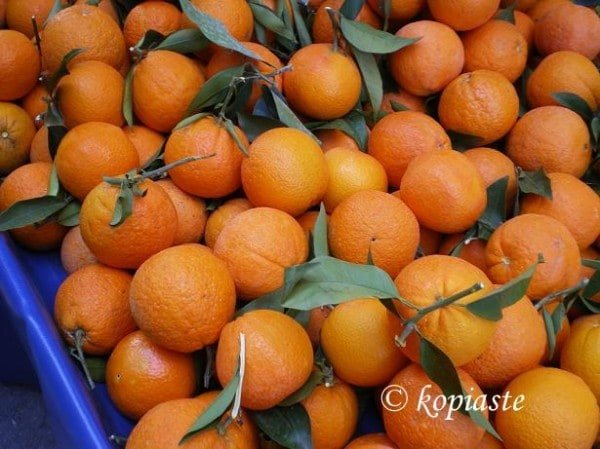 We are building a small maisonette there and I am so happy that we will be moving there and I shall be keeping you updated whenever we visit Asini about the progress of the house. 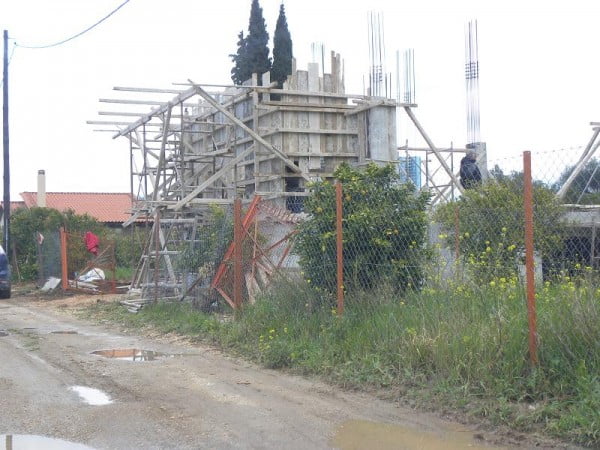 This is how it looked last Monday  and the view of the orange grove, is what I will be seeing from my kitchen.  Can you imagine the aroma when all those orange trees blossom? 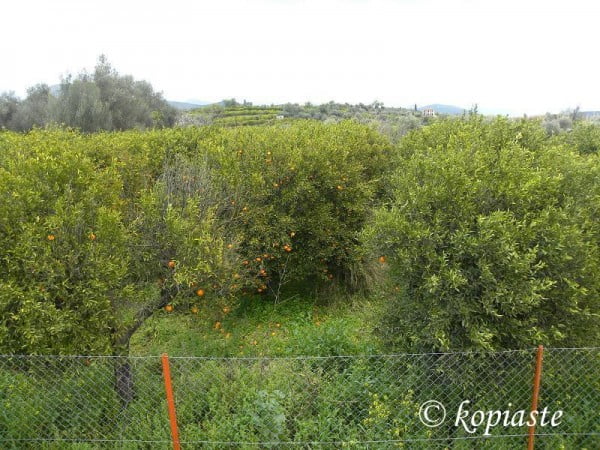 Back to the cake.  I have been trying to visualize how the cake would look.  I wanted the Jelly to have a dome shape on top, so that it would look like the biscuits and that’s when I thought of my non stick frying pan which would give that shape. 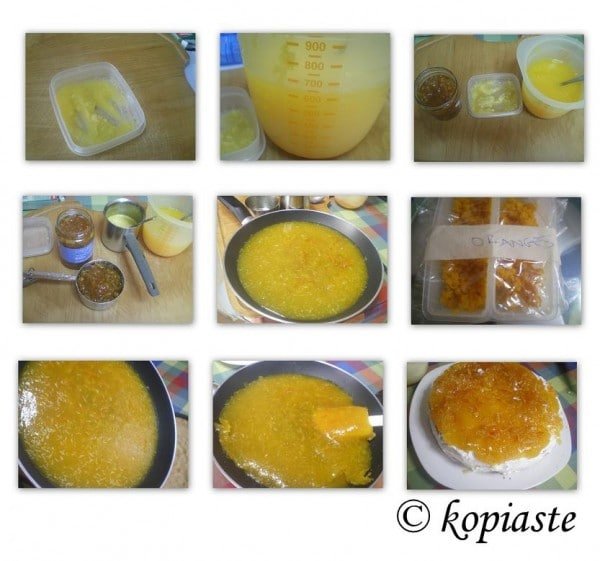 However, I had difficulty in unmolding it and of course flipping it to get the dome on top.    I tried to loosen it with a spatula and then sort of worked like when making an omelet. 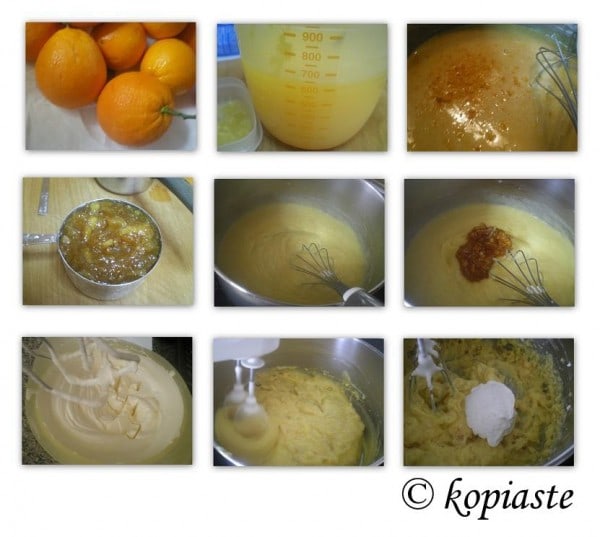 I flipped it on the base of the spring form tin and then inverted it on the cake.  It didn’t land as I expected and part of it was hanging on one side.  Well, the dome shape was gone and there was nothing I could do to move it, so I cut and pasted it in the right place J 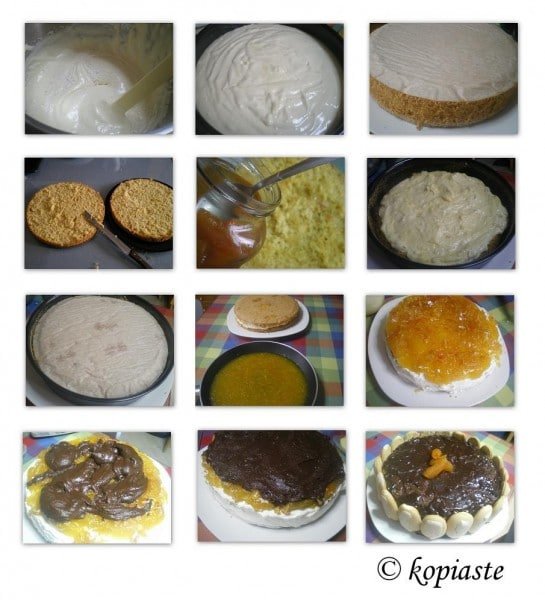 For the filling I used some of those oranges to make the cream, which I combined with whipped cream.   I used half of the whipped cream in the orange cream and left the remaining to decorate the cake on top and on the sides.  I usually keep some to add in the ganache but I got carried away and forgot about it, so in the afternoon when I was making the ganache I was thinking what to substitute the fat of the whipped cream with and since tahini has a wonderful flavour and contains natural sesame oil, I thought it would make it runny.  At the beginning it was runny but I couldn’t add in to top of the jelly while it was hot, as the jelly would melt, so I kept mixing it to keep it smooth.  When I added some on top with the spatula, it would not spread, so I removed it again and added some citrus syrup.  I finally managed to spread it with difficulty but it wasn’t enough to cover the entire cake, so I made the second ganache with couverture, which was the only one left and as I was out of tahini,  I added some butter, milk and honey. 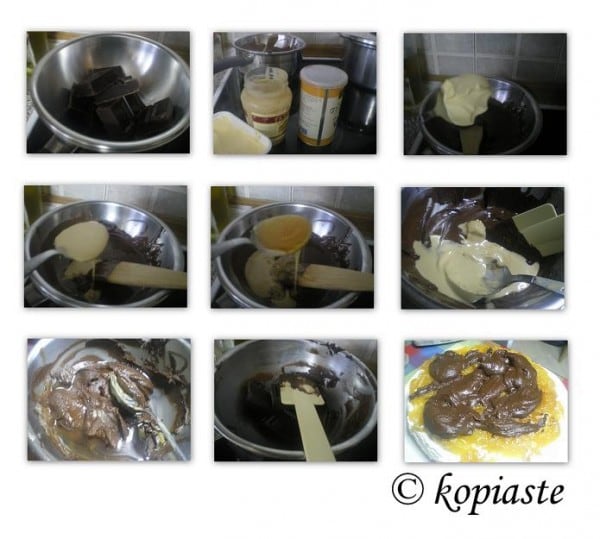 This cake is another concoction of mine, so I am linking it with the event Creative Concoctions created by me.  You still have a few days to send your entries. 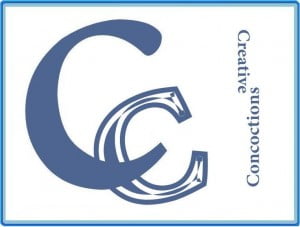 Jaffa Cake, for my birthday, Recipe by Ivy

To wet the sponge:

In a bowl add the gelatin and 6 tablespoons orange juice and set aside for five minutes to be absorbed.

Add the gelatin in a small pot with ½ cup orange juice and on low heat mix to dissolve gelatin.  Remove from the heat and mix in the remaining juice and marmalade.  Place in a frying pan and refrigerate until it sets.

Sift the flour and corn flour with baking powder and salt.

Beat eggs and sugar for approximately 10 minutes till smooth and creamy.

Remove from the mixer and fold in the flour mixture gently with a spatula, so that the beaten air doesn’t escape.

Line with parchment paper a spring form 28 cm tin.  Turn gently the batter into the tin and bake for about 35 – 40 minutes or until a toothpick comes out clean. Turn out onto racks to cool.

Cut each cake into two slices each and wet them with the syrup.

Whip the heavy cream together with vanilla and icing sugar and when peaks start to form, set aside in the refrigerator.

Heat the milk.  In a large pot add the egg yolks, sugar, corn flour, orange zest and orange juice and mix.   Add the warm milk and mix until it sets.  Mix in the marmalade.  Set aside until it cools completely.  From time to time mix it with a hand mixer to prevent it from forming a crust.

When it cools completely, using a hand mixer, mix the cream to make it fluffy and then add half of the whipped cream until incorporated.

In a double boiler add the chocolate and when it melts add the butter, honey, tahini and syrup and mix until its consistency becomes runny.   Repeat the same procedure for the second ganache.

Putting the Cake together

Cover the cake with the remaining whipped cream, starting on the sides and whatever remains spread it on top.

Unmold the jelly on top.

Add the ganaches on top.

Add the Savoyard biscuits on the sides and decorate with the spoon sweet.

I wish to thank all my friends on Facebook for their lovely wishes and wish I could send each and everyone of you a piece of this cake.

In the afternoon when we cut the cake I will post a picture of the cut cake to see how it looks inside. 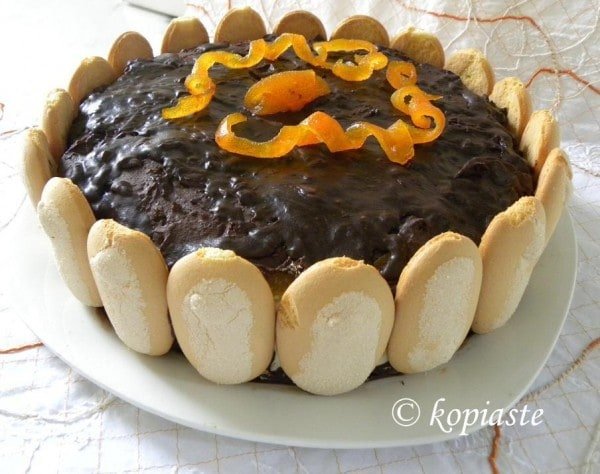 Of course, now it is afternoon and we have already eaten some cake.  There are no words to describe it.  The cake was amazing.  The orange sponge was perfect, the cream filling inside was so silky, light, airy and fluffy and the jelly with bursts of different flavours: bergamot, orange, lemon, mandarin and bitter orange combined with the tahini bittersweet chocolate on top was amazing. 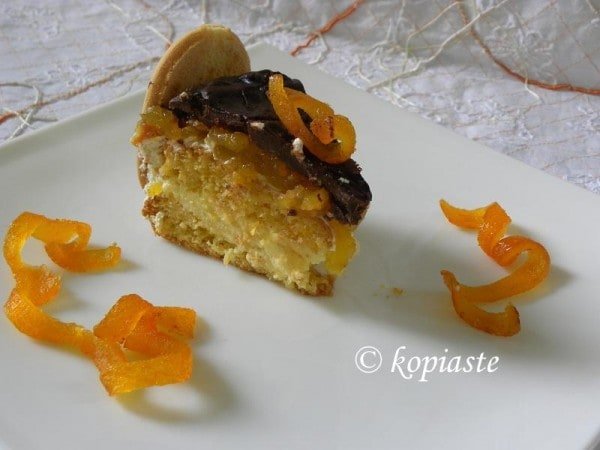 This is now on my to do list for this weekend. Thank you.

a little decoration on the top may make it fabulous, do you think?

You are truly a genius, who doesn't love a jaffa cake. This is now on my to do list for this weekend.

Happy Birthday Ivy!!!!!!!!! Tahini in ganache??? I have to try this. Another delicious recipe... Thanks for sharing your birhday cake with us.