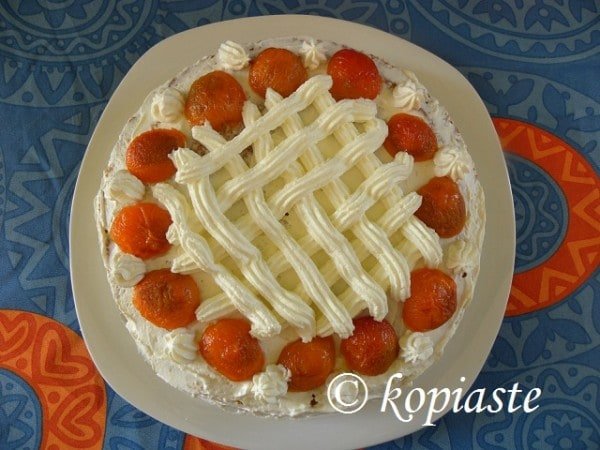 It’s been really hot during the past weeks and as that was not enough, I have been suffering from back aches and pain in the neck so that has kept me away from blogging.   I have been going for physiotherapy and I am a bit better but still I must avoid staying too long on the computer.  The temperature today is above 40 degrees C but hopefully as the weather forecast predicts, it will be the last one today, as as from tomorrow the temperature will be falling to normal levels.   Although I have a fan attached to my laptop, still a lot of heat is coming out from it, making it unbearable.    It’s not been easy to take photos as well.  Imagine being inside with the air-condition and having to take a cake with whipped cream outside to photograph in the heat!!!   I must tell you that I have made a few recipes which I did not bother to take any pictures.

Today would have been the birthday of a dear friend, Barbara Harris, of Winos and Foodies, who passed away earlier this month losing her battle with cancer.

I met Barbara in the early years of blogging participating in some of the events she was hosting.  We became friends but the blogging world is too big for us to catch up with.  At a certain point in my life, blogging became very stressful for me so I decided, while it was still time, to take it easy and visit only those who left a comment on my blog.  I know that I have lost a lot of followers this way but it was something I had to do.   Barbara was one of them but still she and many other blogging friends were still friends and our paths crossed on Facebook, Twitter and recently Pinterest exchanging a few words and some likes, which is more relaxing and less stressful. 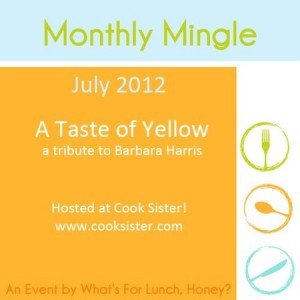 As a tribute to Barbara, I am linking this recipe to the event Monthly Mingle, created by Meeta and hosted by Jeanne @ Cooksister  the theme being “A Taste of Yellow” in memory of Barbara, who ran the Taste of Yellow event to coincide with Lance Armstrong’s LIVEstrong day, where bloggers from around the world would make a yellow dish to raise awareness for cancer.

May you R.I.P. dear Barbara and you will always live in our hearts. 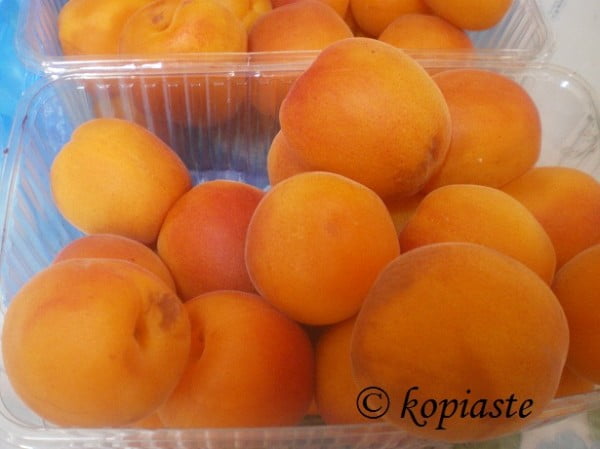 I’ve been making Apricots preserves for many years and as I get bored to follow my previous recipes, I prefer to improvise with new ingredients.  My latest discovery and addiction is Peppermint.  It was the first time I discovered it recently at my farmers’ market I fell in love with it as soon as I smelled it.  I used some fresh Peppermint in a couple of recipe but as I do not find it often enough, I have dried some and have been using it in a lot of my recipes. 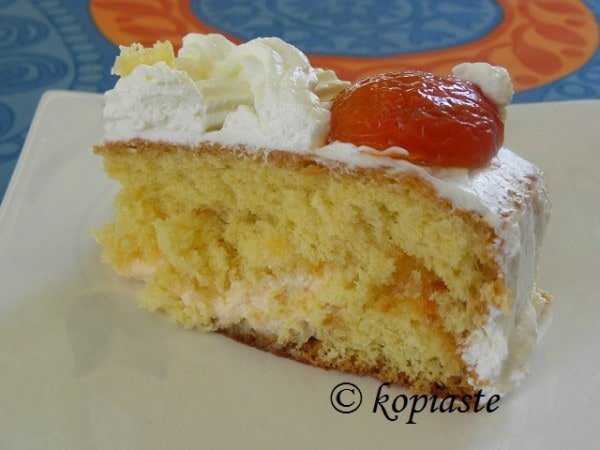 In a large non stick frying pan add sugar, liqueur, lemon juice and blossom water and bring to boil, mixing until it begins to caramelize.   Meantime wash and pit the apricots and cut them in half.  They should be wet when added to the sugar syrup so as to release some juices.  Cook for a few minutes.  Add peppermint leaves, mix and turn off the heat.  Set aside to cool.

Store in a glass jar in the refrigerator.

I used the caramelized apricots in several recipes, two of which I am posting today. 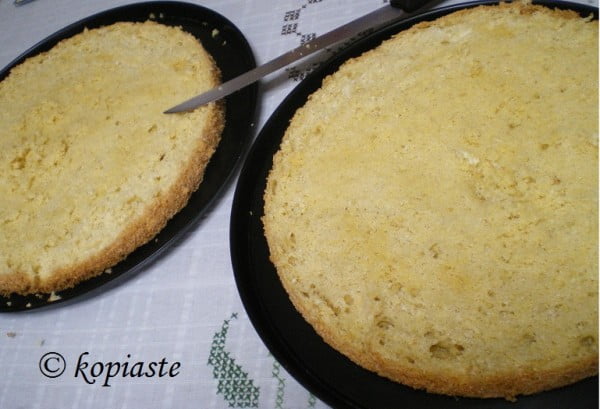 The only thing I do not get bored of making using the same recipe is my sponge cake, so early in June, when it was my husband’s birthday, I made this cake for him. 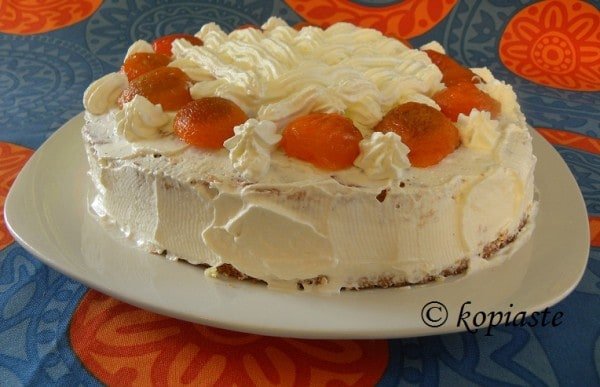 Putting the cake together:

Cream Cheese Filling: In the bowl of your electric mixer, or with a hand mixer, beat the cream cheese and heavy cream until smooth. Add the apricot jam and mix until incorporated.  Remove to a bowl and refrigerate.

Whipped Cream:  In the bowl of your electric mixer, or with a hand mixer, beat the heavy cream with 2 tbsp icing sugar and vanilla, until peaks form.  Refrigerate.

With a serrated knife, cut the cake in the middle. Wet each piece with some apricot syrup. Place one of the cake layers onto your serving platter and put the spring form ring around the cake.

Spread the apricot filling and cover with the second sponge.  Refrigerate for about an hour for the cream to set.

Remove the spring form and garnish the cake with whipped cream and caramelized apricots. 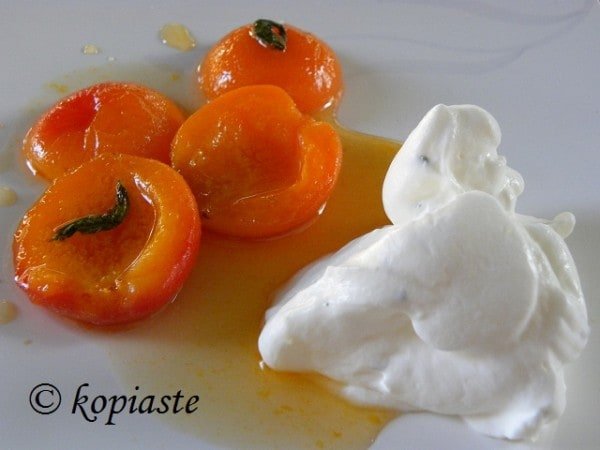 I had leftover caramelized apricots and one day when I had unexpected guests I made this recipe in less than fifteen minutes.  It makes a very light and refreshing dessert and also good for the digestion as both mastiha (mastic) and peppermint are very soothing for the stomach.

Pound mastic with 1 tsp sugar and set aside.

Whisk heavy cream with sugar and mastic until peaks form.  Add yoghurt and dried peppermint and mix to combine.

Refrigerate for half an hour.  Serve with caramelized apricots.

Note:  I have used the caramelized apricots on top of cheesecake and served it with ice-cream and both were delicious but unfortunately as I said above I did not take any photos. 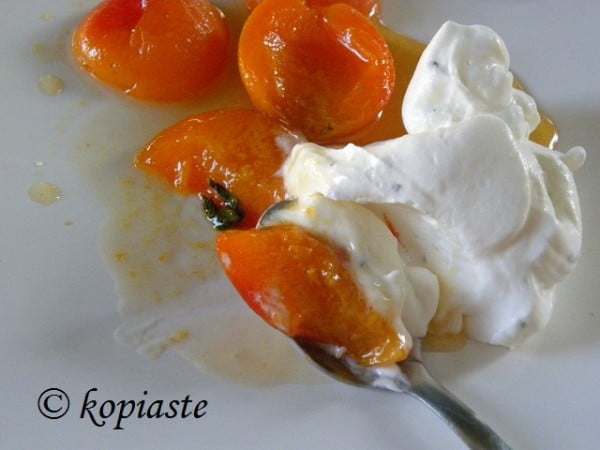 What a beautiful cake for a beautiful person that Barbara was. I don't seem to have received any e-mail from you submitting this entry but saw the cake on the Pinterest board - hope you don't mind my including this in the roundup?

I love your contribution to the Taste of Yellow. I also met Baraba just in passing on twitter. Even with such a brief enounter she left a very positive impression on me. Your cake looks wonderful with such an interesting combination of flavors. Now I finally now what to do with the mastic I bought months ago.

Sorry to hear about the loss of your friend. Nice gesture by you to dedicate this recipe to her. It is a very interesting recipe.

Ivy, your caramelized apricot looks awesome, love the color...so summery. Beautiful cake! Sorry about your friend... Hope you are having a wonderful week :)