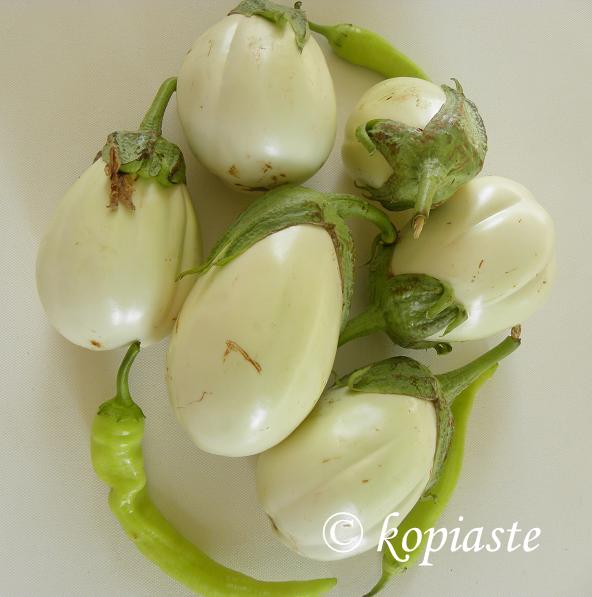 My favourite eggplants until now were “tsakonikes” which I thought were the only ones which were sweet.   I avoided cooking with the big round purple ones, as I heard that they were bitter. I’ve been seeing white eggplants at the market place for a long time but had never tried them until recently.  When I saw them at the farmers’ market a few weeks ago, I stopped at a stall and as I didn’t know much about them I asked the farmer if they  were bitter and if they should be put in water and salt before cooking them, as  we do for the purple ones.   I saw a smile on his face and he said “Are you kidding?   Greek eggplants are not bitter and don’t need this procedure.    Even more, these  Santorini eggplants not only have a very sweet flesh, they do not have seeds and do not absorb oil!!   Try them and you will be here next week as well.  ” 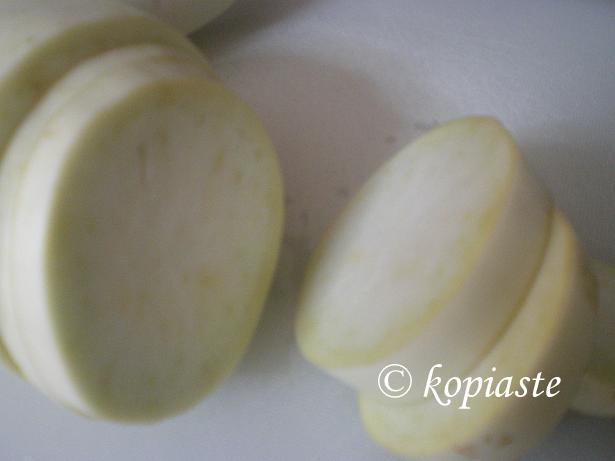 I didn’t want to hear any more to be convinced to buy them and he was right, I was back next week and bought them again as I am totally in love with them.

I wanted to share a few of the recipes I made and to begin with I had bookmarked Rosabella’s Eggplant sandwiches which reminded me of some eggplant rolls, Rola Melitzanas me Feta,  I used to make but which I haven’t made for a long time as those were deep fried.   I combined the two recipes  and made them into sandwiches following Rosabella’s recipe but using Greek cheeses.  For the coating I added some roasted sesame seeds and almonds in the breadcrumbs which I had leftover from another recipe, remember the anthotyro bites!.

They were delicious.  I only regret that I did not make more, but that day the main dish was Briam,  plus I had leftover louvana (fava), which I made into a dip and marinated sardines. 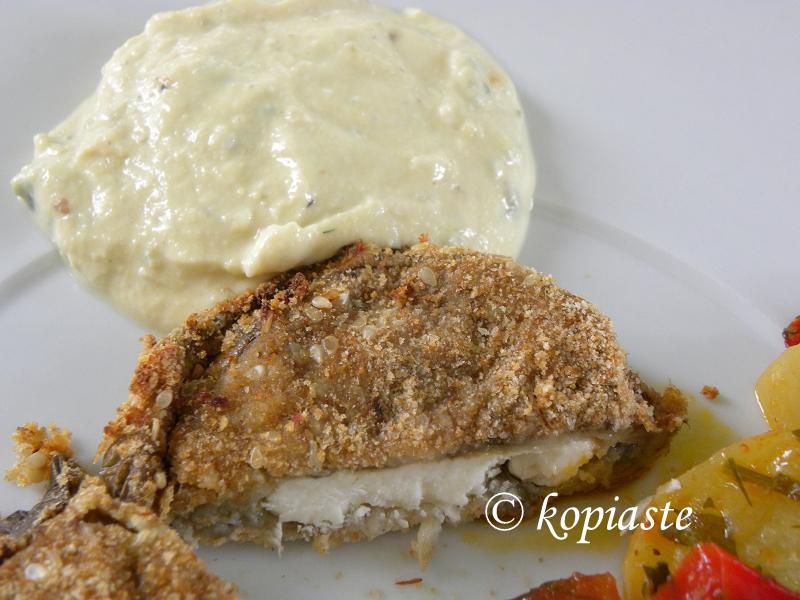 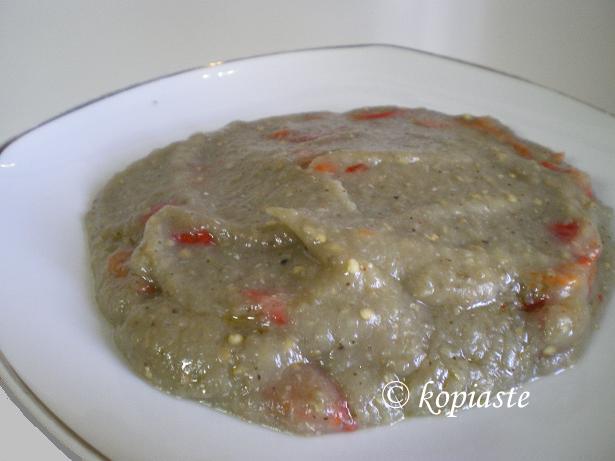 Melitzanosalata is a dip made with eggplants which have been grilled with skin on, on open flame until the skin blisters.    The skin is then removed, as well as the seeds and the eggplant is pureed.  I did not use a food processor but I used a fork to puree them.  I pounded the garlic with the salt, added vinegar and olive oil, black pepper and pureed the roasted red peppers (piperies Florinis)  again with a fork and mixed all the ingredients together.

This is an older recipe which I had not posted and used Tsakonikes eggplants but  I wanted to show you another use of this delicious eggplant in which of course there will not be any visible seeds, although when making the dip I removed as many seeds as I could. 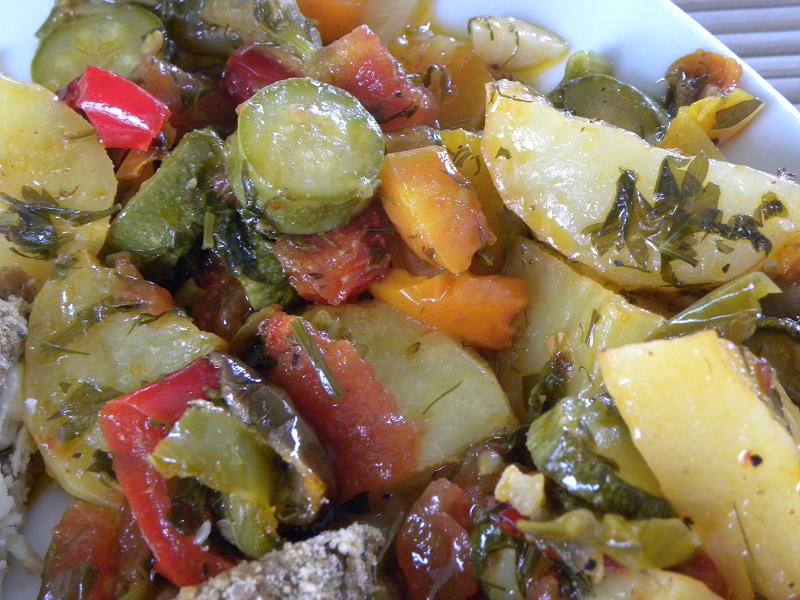 Each time I make Briam it’s different because this is made with almost any vegetables you have at home.

This time I used potatoes, baby courgettes, Santorini eggplants, carrots, various colours bell peppers, tomatoes, onion, spring onions, garlic, parsley and dill.  All these were finely cut, seasoned with salt, pepper, oregano, thyme and added ½ cup olive oil and ¼ cup lemon juice.  No water was added and they were baked in the oven mixing the vegetables a few times until they were cooked. 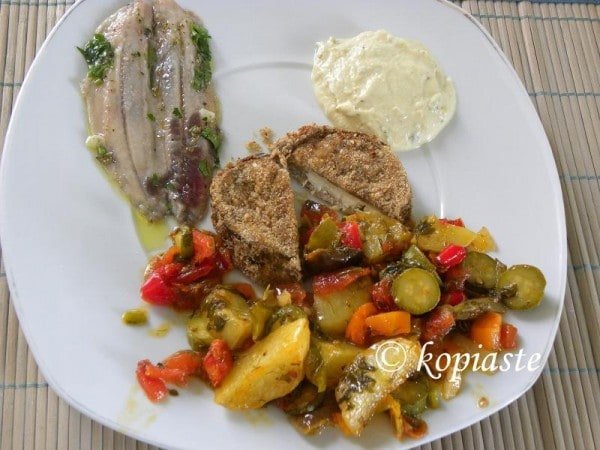 I had some leftover Santorini eggplants,  baby courgettes which were about 10 cm long and peppers,  so I grilled them and used them in a pasta dish. 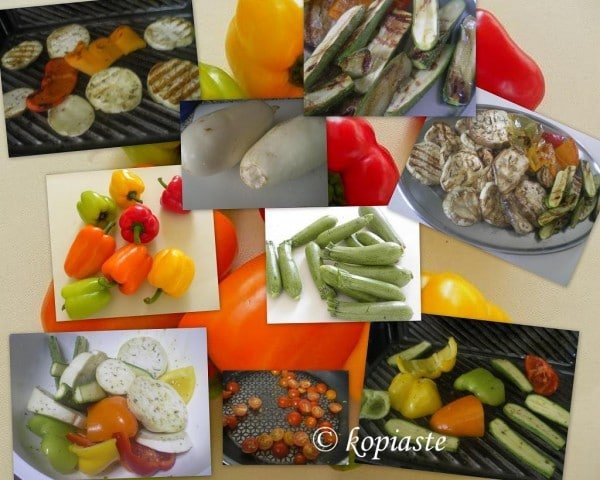 Penne with Grilled vegetables and Pesto

Boil pasta according to package instructions, about 15 minutes and same time start grilling.  Different vegetables will take different amounts of time to cook.    If pasta is cooked before the grilling is over drain and fill the saucepan with pasta with cold water.

Cut the eggplants into 1 cm round slices, deseed the bell peppers and cut them into large pieces and cut the courgettes lengthwise,  in the middle.  Put them in a large bowl and add salt, pepper, oregano, thyme and 2 tablespoons olive oil, toss well and marinate them for a few minutes.

Heat the grill and brush with olive oil. Start grilling beginning with the eggplants as they turn brown if left for a long time.  Remove vegetables when the skin begins to blister and the middle becomes soft.

When done set aside to cool and then cut them into smaller pieces.

Half the cherry tomatoes and brush a non stick sautéing pan with the olive oil marinade and sauté them as well.  Drain pasta.

Remove the tomatoes, add the cooked pasta, as well as the pesto and mix well.  Finally mix in the vegetables and season with salt and pepper.

Serve with some finely chopped parsley and freshly ground black pepper on top.

The amount I grilled was more than we needed for the pasta dish but I am glad that there were leftovers as in the evening we made toasted sandwiches.    In the evenings I eat light so I made a toasted sandwich with low fat cheese and smoked turkey and when toasted I added some grilled vegetables.

The best toasted sandwich I ever ate.   Healthy, light, filling and delicious.

After that I have grilled vegetables again, especially to use in my sandwiches.  They keep well in the refrigerator for 3 – 4 days and you don’t have to reheat them or remove them from the refrigerator before as when added in the hot toast, they will immediately reheat. 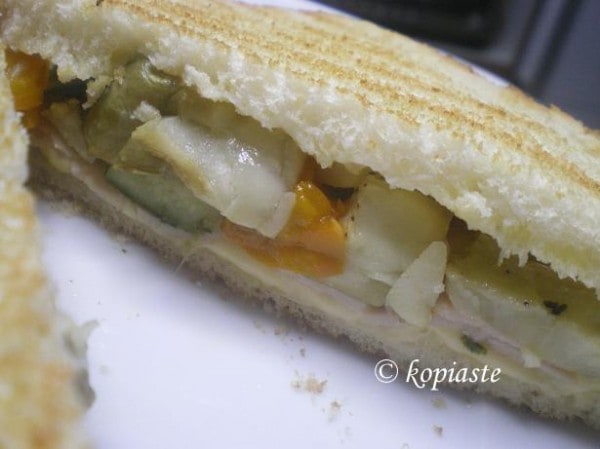 Thanks I am bookmarking this.

oh my god! I wonder if I could grow those here in the states?

Wow - I love the look of these white eggplants. We don't get anything like that here in Australia!

i made the melitzanosalata...but with black eggplants! it was fantastic!

Thank you. Glad you liked it.

hi ivy i have seen recently these whites eggplants by my fresh markets now i know how I should have cooked them !! hope you are not too disturbed by the oil transporter strike !! Pierre