When making these roulades I kept singing the nursery rhyme “Oranges and Lemons say the Bells of St. Clement’s” which we used to play in England at primary school:

This is one of the first English songs I learned  as a child, when I used to go to primary school in London.

Two children would form an arc and become the choppers.  They would secretly decide who would be orange and who would be lemon.  A line of other children singing the song would pass under the arc and the child passing when the song goes chop, chop, chop would be caught.  He should choose among orange and lemon and would line behind the child he chose.   When all children lined behind the choppers they would have a tug war.

So what do you say?   Oranges or Lemons Chocolate Roulade? 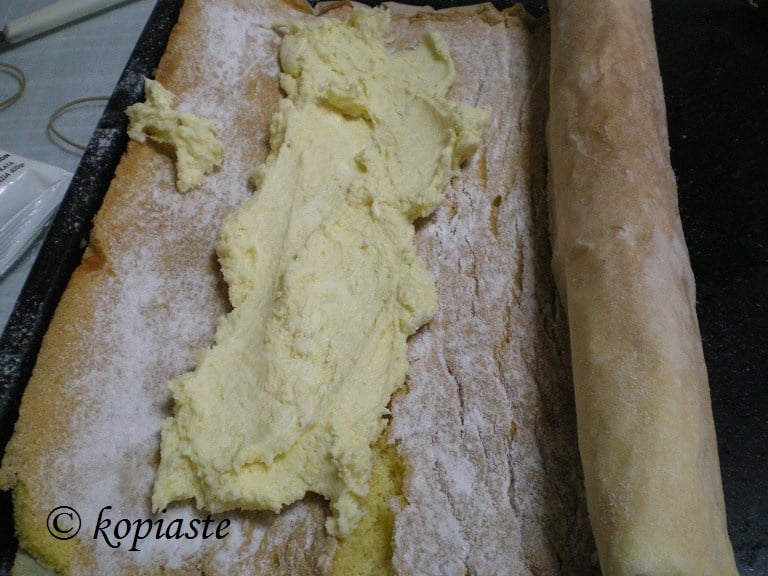 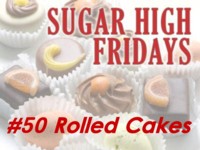 I chose to make  sweet Roulades, also called Swiss roll.  Roulades can be sweet as well as savoury.   The second most common form of roulade consists of sponge cake or cake baked in a flat pan rolled around a filling, such as rolled around jelly, chocolate buttercream, nuts or other fillings. 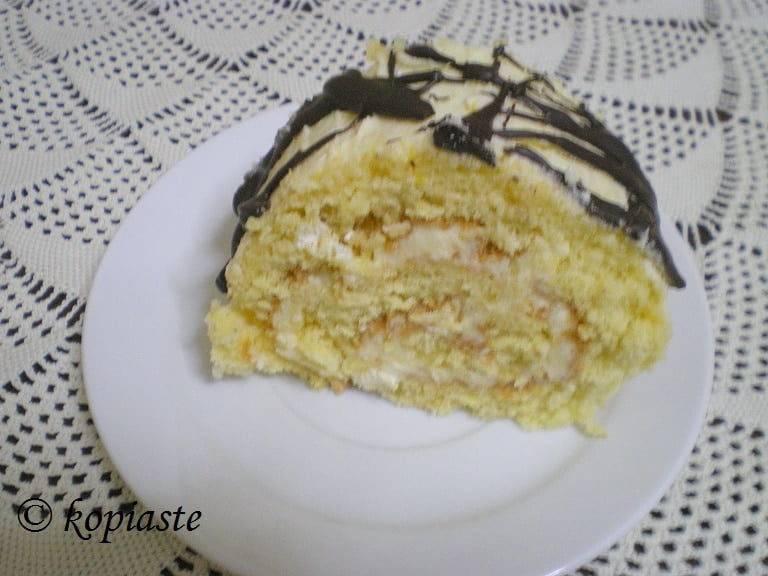 The sponge cake is the same for both roulades but to play this game you will have to chose one of the two:

Ingredients for the Lemon filling:

Sift the confectioner’s sugar and set aside.

Put butter into mixing bowl and start beating till smooth.

Reduce mixer speed and add sugar slowly so as to avoid creating a powdered cloud, a few tablespoons at a time.

Add egg yolk and two tablespoons of lemon juice (in which saffron was added). Continue mixing till very smooth.

Check consistency of frosting. If still too stiff, continue to add one tablespoon of lemon juice at a time until the right consistency is achieved. It should not be too stiff. 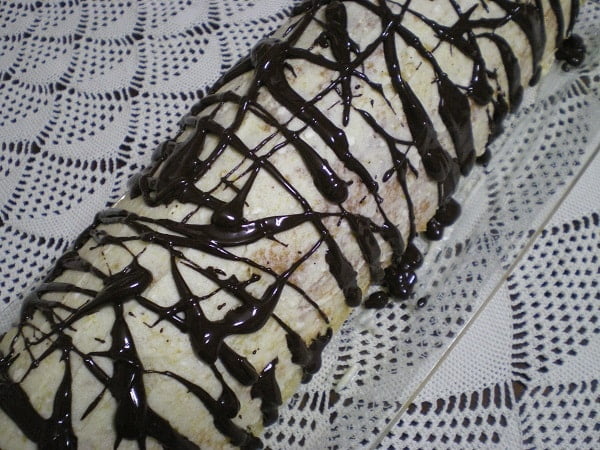 Ingredients for the Lemon Icing:

Beat the egg white until stiff and add all the other ingredients until the icing has the right consistency.

Putting the Sponge Cake together:

Then roll up again and add lemon icing.

Ingredients for the Chocolate ganache decoration:

Melt chocolate in the microwave for a couple of minutes a low temperature.  Repeat procedure until chocolate melts.   Mix in butter and fresh cream and keep mixing until it cools. 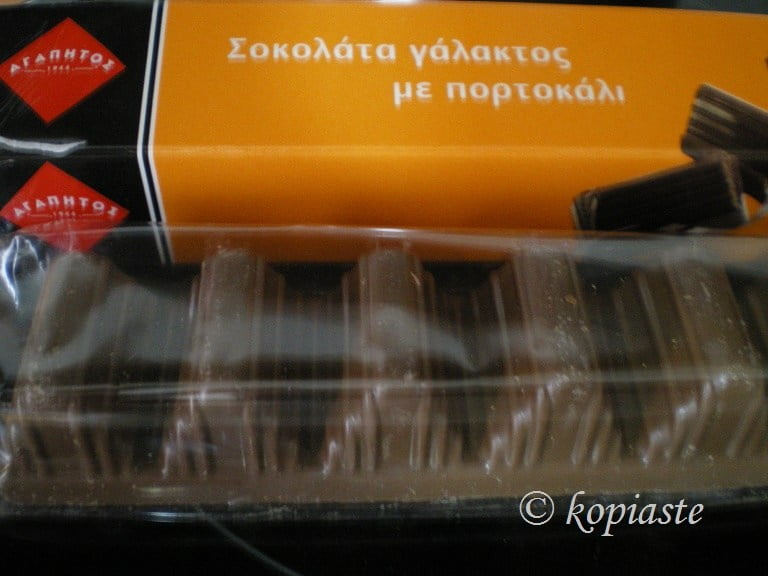 Ingredients for the filling:

Prepare the same sponge cake as above, using the orange flavours.

Whip the whipping cream until it becomes stiff and add the cream cheese together with the orange essence and whip until cream cheese is incorporated.

If you are using orange marmalade, icing sugar is not necessary.

Refrigerate until the sponge cake cools down.

When the sponge cake is almost cold prepare the ganache. 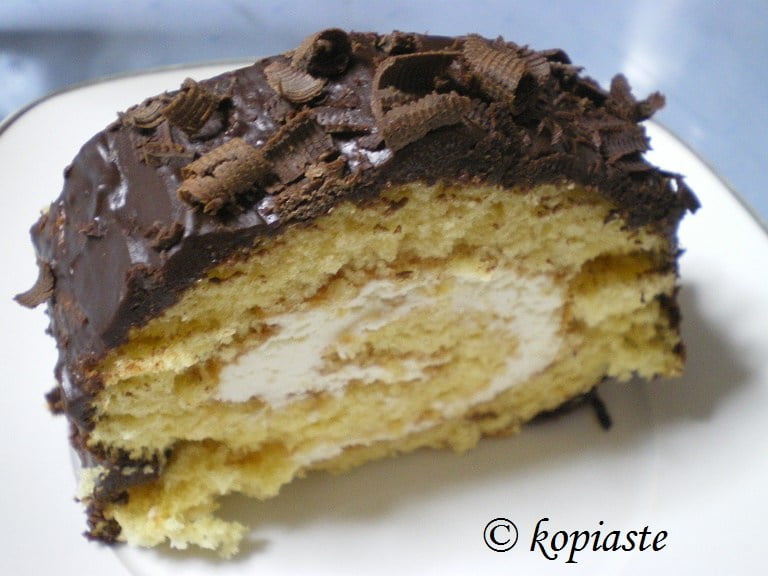 Melt the chocolate slowly in a bowl over a pan of hot water (or in the microwave, as above) . When it has melted add the whipping cream and 2 spoonfuls of the cream cheese mixture and mix until they have all incorporated into a cream. Allow to cool slightly.

Before the chocolate cools completely, spread over the roulade to cover all the surface and sides.

With a vegetable peeler, shave some chocolate on top.

Well which one will it be?

or a Savory Roulade:

Ivy, thank you for participating in SHF #50. These rolled cakes look both wonderful, it is difficult to choose only one...however, lemon is my favorite :-)

oooh my God! These look so very tempting! All of them. Yum yum yum!

Hey Pixen, such sweet memories are hard to forget. I remember Ring a ring o' roses, a pocket full of posies... Then I remember The big ship sails on the alley, alley oh.... Then another one: A sailor went to sea, sea, sea, to see what he could see, see, see.. I don't remember Ole King Cole but I do remember Sing a song of 6 pence, Baa, baa, blachship.. etc. It's strange how I can remember them after so many years...

Heyyyyy, I sang and learnt that poetry in school as well :-D There were other nursery rhymes and poems too. Do you remember Ole King Cole or Sing a Song of 6 pence? As a kid I love eating roulade or swiss roll... I would unroll it before eating them LOL Guessed I have to learn how to roll again :-D Thanks for recipe and made me remember those fun days !!!

Looks absolutely delicious. Maybe Psychgrad and I will attempt to not be such losers with anything that might remotely look like a jellyroll.