Agioritiki Tigania is a mixture of fried meat in a wine sauce. The name of this dish is named after Mount Athos, which in Greek is Aghion Oros. I don’t know if the monks in Agion Oros prepare this dish but it is a very good mezes.

Before going to Thessaloniki I asked a friend if he knew any good restaurants we could visit and he was kind enough to communicate with a friend of his and he told me a few good spots.

I printed the e-mail but I forgot to take it with me.   However, I was lucky enough to find people from the hotel who gave us some good suggestions and wherever we went we were totally satisfied.

Thessaloniki is renowned for its good food, not in the sense of Gourmet high class restaurants (I am sure there are some of them as well) but mainly for its ouzo taverns, which you can find them anywhere.

As I told you in the previous post, the receptionist of the hotel gave us directions to go to a side street off El. Venizelou Steet, and he suggested one of the restaurants in Karipi Street. 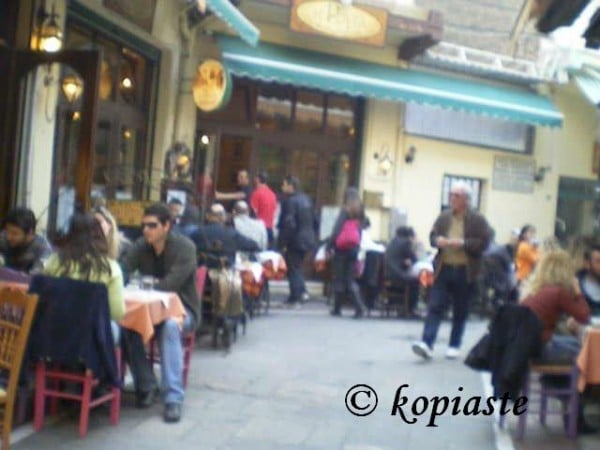 However, by instinct we chose Rouga Restaurant and it proved that we were right.

The weather was good and all the tables outside were occupied.We sat inside but even inside there were a lot of people.

It was nice and cozy and decorated with taste.

When I travel I always like to try something local and this time I chose Agioritiki tigania.

Although the word tigania means something fried, we had no idea what this dish was about so we ordered some of the dishes we knew and liked, as well as this one.

I must say that we were not only impressed by the food but also by the service.

The waiters were all around you, quick with the orders, polite and efficient.

I noticed that they were all locals, something which is very rare nowadays.

I do not have anything against foreign employees but against the owners of various businesses, including restaurants, who hire cheap labour force and most of the times these employees know nothing about the job and don’t even know the basics of the profession or the language.

I have visited other restaurants many times where I was compelled to speak English, in my own country, in order to make them understand what I wanted.

When we asked for the bill, (the prices were quite reasonable), it came along with a platter with desserts on the house.

In fact, in most of the restaurants we visited in Thessaloniki, we were offered a dessert. This is usual in Cyprus but I have never saw this in Athens.

After paying, we told the owners, who were sitting just beside us, that we enjoyed everything. 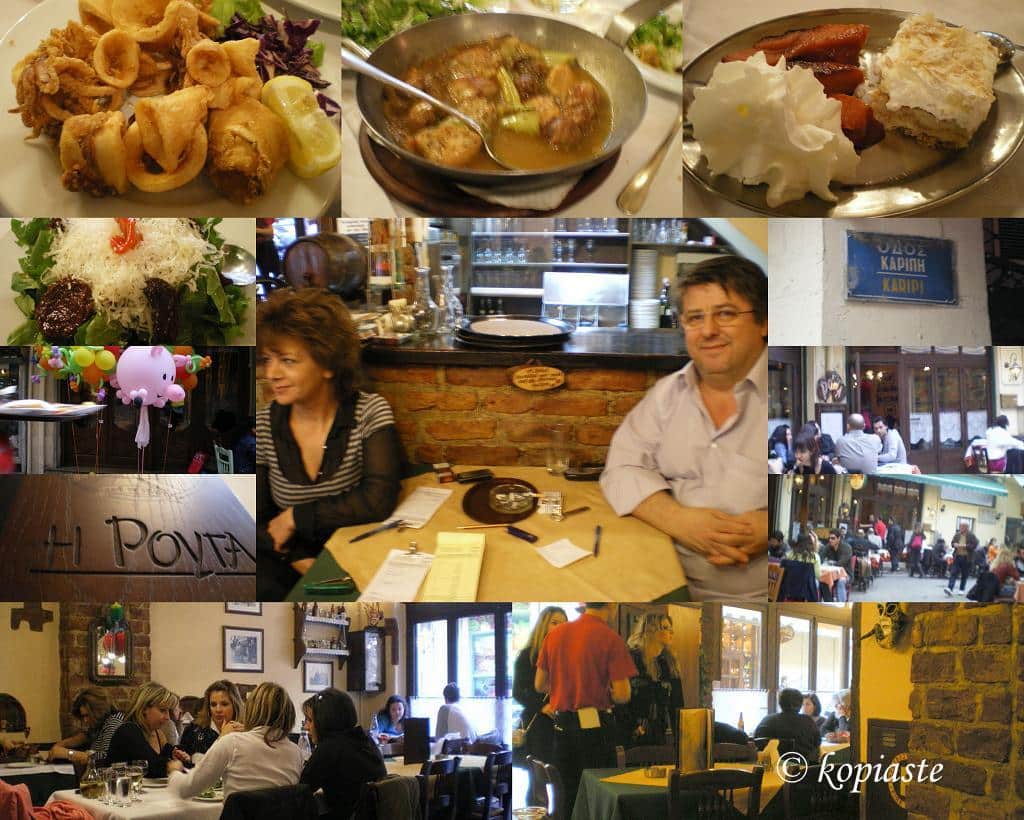 Mrs. Reppas was a bit shy but Mr. Reppas was very talkative and when I asked if they could give me the recipe, as I wanted to write about it in my blog, he willingly wrote down the ingredients for me.

As I thought that I tasted allspice and cumin in the dish but this was not written in the ingredients, I asked Mr. Reppas about it but he explained that the taste came from the sausages.

So if you use Macedonian sausages, skip these two ingredients. 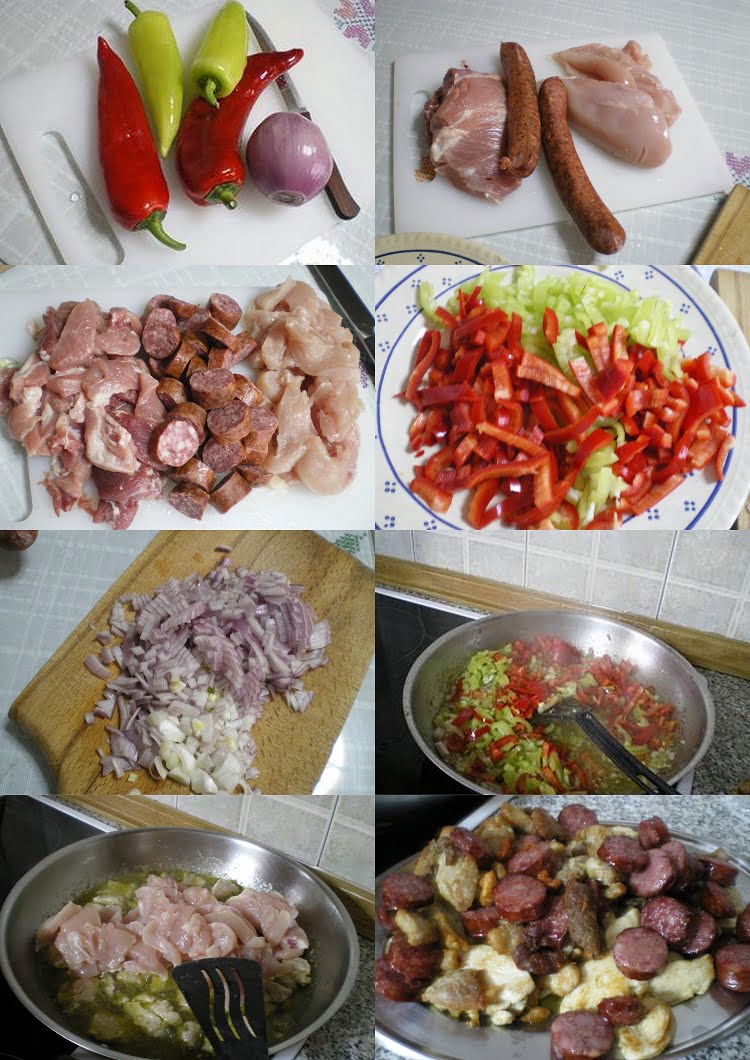 When preparing this recipe I also added the red peppers and instead of adding sauce anglais I added fresh cream.

I did not find Macedonian sausages so I added the allspice and cumin.  The recipe, turned out just as tasty but I think I forgot to add the water that’s why it turned out a bit dry.

A pinch of cumin

All spice berries (in case you use other kinds of sausages)

1 spoonful of flour for the roux

A couple of drops of Sauce Anglais

Wash the meat and cut into small pieces.

Wash and cut the peppers and onion.

In a frying pan sauté the meat. After sautéing add the onion as well as the peppers.

Add wine, salt, pepper, cumin, allspice berries and some water and simmer until the meat is soft and tender. Add flour and mix well.

Finally add a couple of drops of sauce Anglais and stir.

Serve with lots of bread to mop up the delicious juices. 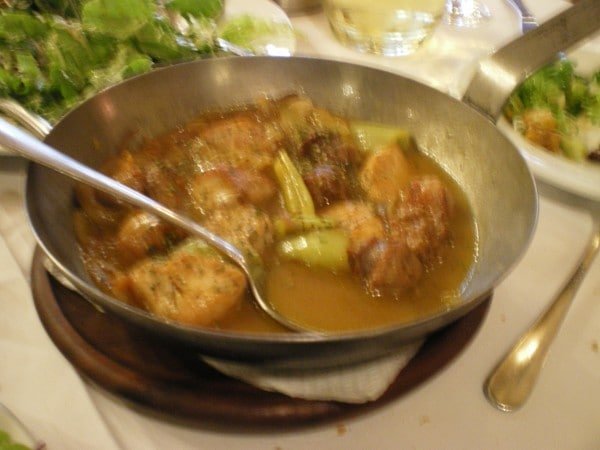 hmmm... yummy... look delicious... it really inspired me, and I became curious to try it.

I've learned a lot about Spanish recipes by reading your posts. That's why we all love blogging.

Hola Ivy. Your posts are so complete, full of info about the history, the restaurants, the dish... Thanks for sharing it with us! I'm learning so much about Greek cuisine :D

Pity you are not coming but have fun :-) wherever you go.

What fun! I am having so much fun reading these posts! :)

We thought about all kinds of places for our honeymoon, including Greece, because I have alsways wanted to go. But decided in order for us to really relax and connect with each other, we wanted to go somewhere without much to do. If we came to Greece, we would want to see EVERYTHING and never relax - so we will have to save this trip for another time. But it is definately in the plans! :)