For this month’s challenge of the  Royal Foodie Joust, I made Veal in Dark Beer with a Sweet and Sour Pumpkin Sauce.

Every month there is an event going on, where the winner chooses three ingredients with which we have to cook.  Although I love participating at this event as we challenge ourselves to create recipes we would never dream of making, most of the times the ingredients given are not so easy to find in Greece.   When I saw the ingredients this month, which were  Black beer, sugar and pumpkin,  I was really happy and knew I could make a recipe with the three ingredients chosen by the last winner of the Royal Joust.

If you think sweet-and-sour food belongs only to Chinese cuisine, you’re only partially correct as Ancient Greek Cuisine also had sweet and sour tastes as well.  Although it is rather impossible to recreate ancient dishes, as we do not know the exact spices and ingredients they used nor do we cook using the same utensils and methods, garos was a sauce made from fermented fish, similar to soy sauce and fruit, petimezi (grape molasses), honey, vinegar were included in their dishes.

Although I have never cooked with pumpkin before (except of course for making pies, I knew that the natural sweetness of the pumpkin, plus that of brown sugar and fruit, would perfectly match with the toasted/roasted malt aroma with a hint of caramel and some minimal fruitiness and a little bitterness of the bock beer, so my choice was to make sweet and sour, inspired by ancient Greek cuisine.

You can cook this dish in a Dutch oven without having to use a skillet.  My casserole dish cannot be used on the stove top, so I prepared the first step in a skillet.

Although originally I was thinking to leave the dish as it was, when it was cooked, I was really skeptical if my teenage daughter would eat it at the sight of cooked pumpkin and onions, so I had to think of something that would appeal to her.  She loves pasta and she doesn’t mind eating carrots, so that is the reason why I decided to puree it, in case she would ask “what’s in the sauce mum?” I would tell her carrots. 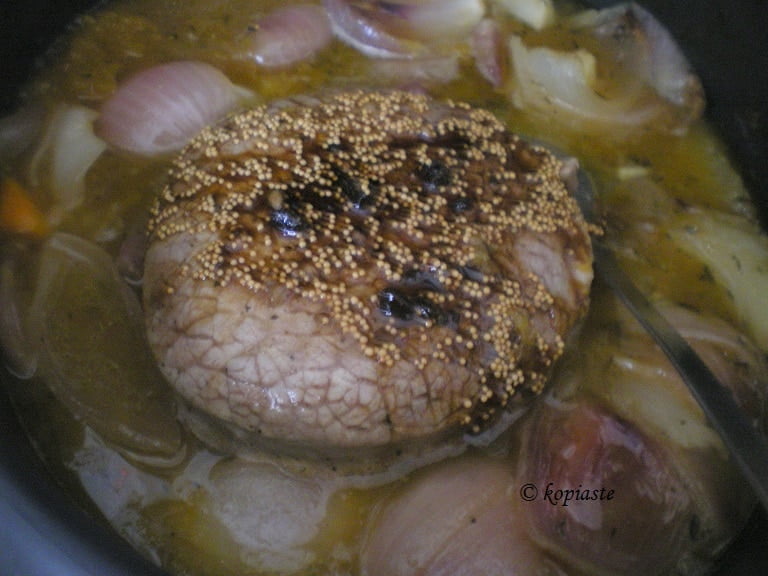 The meat was tender and flavourful and the sauce was delicious.  My daughter ate it without any complaints and the rest of us kept adding more and more sauce, mixing it with the pasta.  This is definitely a dish I will make again. 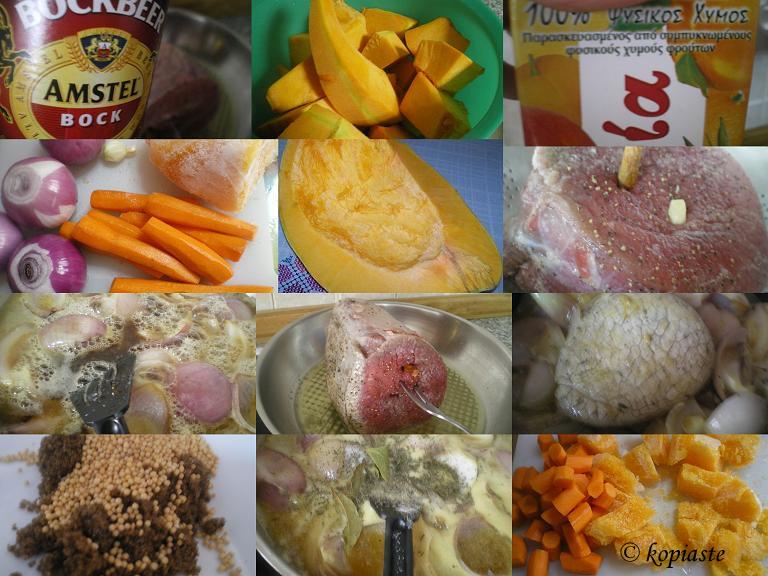 Beef or Veal in Dark Beer and Sweet and Sour Sauce

Note:  Leftover broth can be stored in the refrigerator for 3 – 4 days and can be used in other recipes.

This is something i really love to have on my dinning table, the pic was really fabulous, thanks for sharing the recipe.

I love this beautiful delicious pumpkin sauce a lot!

Yum! This is my kind of dinner.

Ivy, this looks delightful! Veal braised in beer is going to be a hit with me and the aromatics you chose would be so seductive. Mmmmm.....

You always show so much culinary creativity!

Thanks so much for your comments.

Thanks to two new friends for passing by: Glennis and Tastes of Beirut.

Teresa, hope you and your hubby enjoy the recipe.