Portulaca oleracea (purslane) in Greek (γλιστρίδα) is the type genus of the purslane family Portulacaceae, comprising about 40-100 species (probably much fewer and potentially far far more) found in the tropics and warm temperate regions. It is also sometimes known as Rose Moss or more commonly Moss Roses. 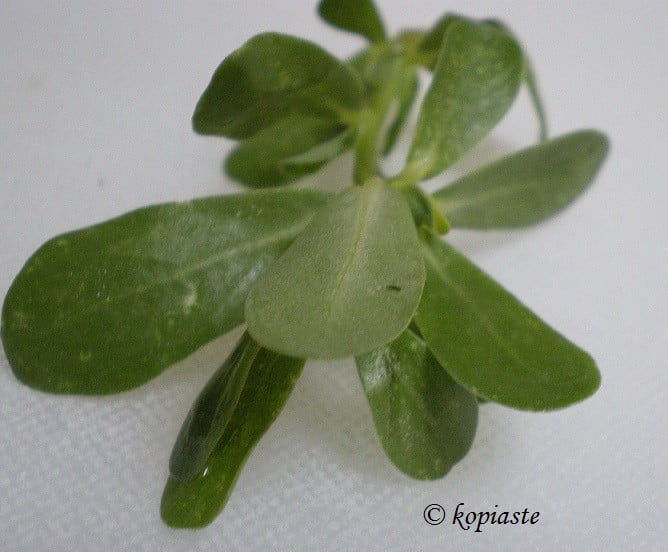 Purslane contains more Omega-3 fatty acids than any other leafy vegetable plant.   Simopoulos states that Purslane has .01 mg/g of EPA. This is an extraordinary amount of EPA for land based vegetable sources. EPA is an Omega-3 fatty acid normally found mostly in fish and some algae. It also contains vitamins (mainly vitamin C, and some vitamin B and carotenoids), as well as dietary minerals, such as magnesium, calcium, potassium and iron. Also present are two types of betalain alkaloid pigments, the reddish betacyanins (visible in the coloration of the stems) and the yellow betaxanthins (noticeable in the flowers and in the slight yellowish cast of the leaves). Both of these pigment types are potent antioxidants and have been found to have antimutagenic properties in laboratory studies. 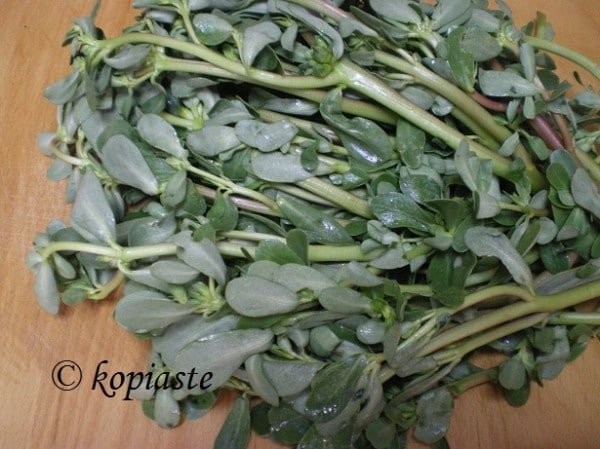 Widely used in Greece, archaeobotanical finds are common at many prehistoric sites. In historic contexts, seeds have been retrieved from a protogeometric layer in Kastanas, as well as from the Samian Heraion, dating to 7th century BC. Theophrastus in the 4th century BC names purslane, andrákhne, as one of the several summer pot herbs that must be sown in April.

In Greek popular medicine, purslane is used as a remedy for constipation and inflammation of the urinary system.

Known as “Sanhti or Punarva” in North India it is known to act as a liver tonic and is used in diseases of the liver.

Although glystrida or antrakla (purslane) is a vegetable I tried when I was younger, I was rather indifferent about it and since leaving home I never bothered to buy it again. I decided that it was time to give it a second chance and I must say that I regret that I hadn’t tried it again all these years. I will definitely buy it over and over again not only because it is healthy but also because it is very tasty.

“Purslane is a succulent herb and the leaves are juicy. I can’t give you exactly the taste as it is difficult for me to describe. Although I have read that it is spicy and tangy, I would not agree on the first description that it is spicy but I would say it has a lemony taste.”

Our dinner was grilled chicken (with salt, pepper and oregano) and I tried some pesto on the chicken and it was perfect.

When I prepared the salad I wanted to experiment more with it and reserved a small amount, which I did not add the salad dressing but instead I added some of the leftover purslane pesto.

The pesto gave it a totally different taste but both salads were worth trying. I even tried mixing both salads together in the end and again all combinations gave it a great taste.

I am submitting this salad to Lisa and Holler, who are hosting this month’s No Croutons Required, where we are called to make a vegetarian soup or a salad, showcasing our favourite herb or experiment with a herb that is new to us. 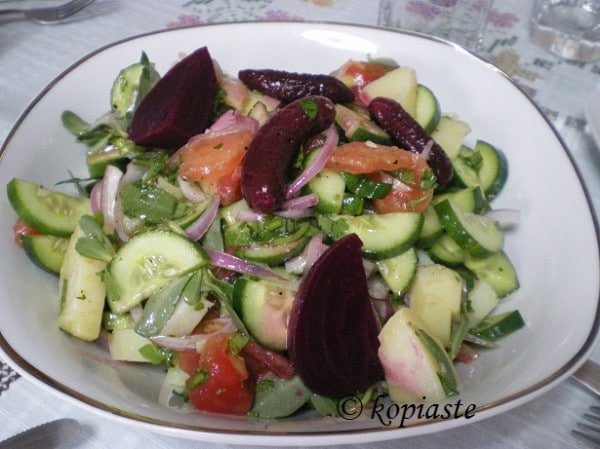 The next day I still had some purslane left so I just made the most simple purslane salad I used to eat in Cyprus: Tomato, cucumber, purslane, salt, olive oil and wine vinegar. Nothing else, no onion, no oregano, no olives, no capers just these few ingredients and it was still very good. 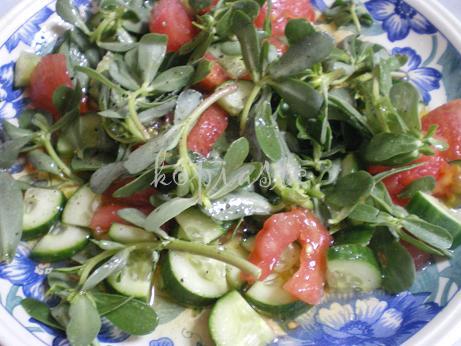 Now that we are going to the Lake nearly every day, I have to think of easy solutions for lunch. When I prepare meat balls, sheftalia or burgers, I usually make larger quantities and have them in the deep freezer for similar cases, so this morning I thawed some sheftalia. 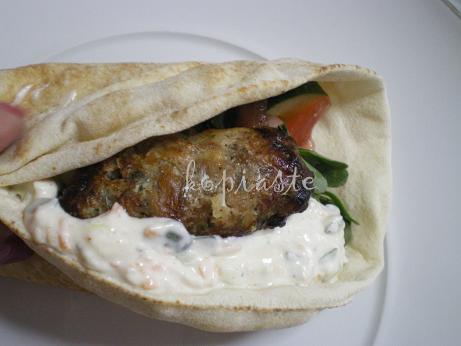 By the time I grilled the sheftalia, I prepared the salad and started preparing a tzatziki which goes well with sheftalia and grilled meat in general. When I began preparing it, I remembered a “different tzatziki” I had prepared about a month ago and checked in my refrigerator to see if I had the carrots. 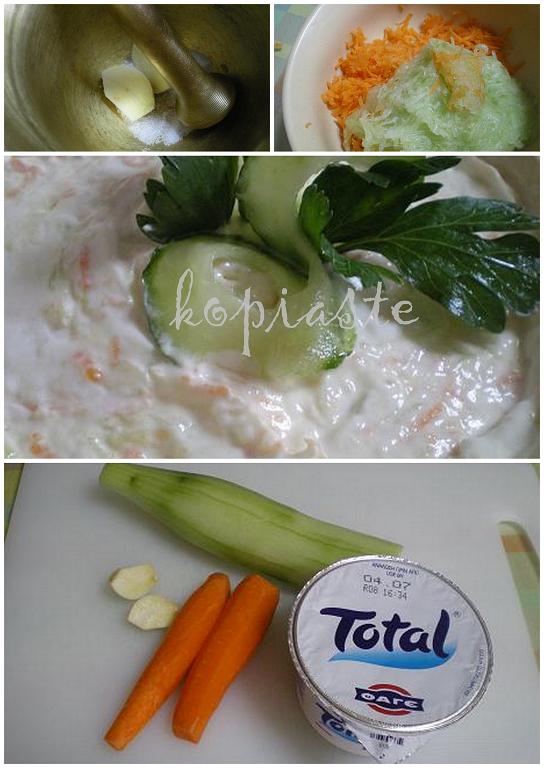 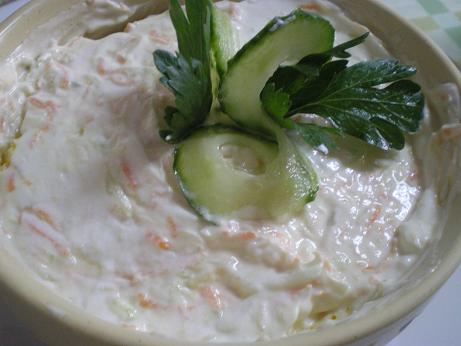 Did I stick to that recipe? No. 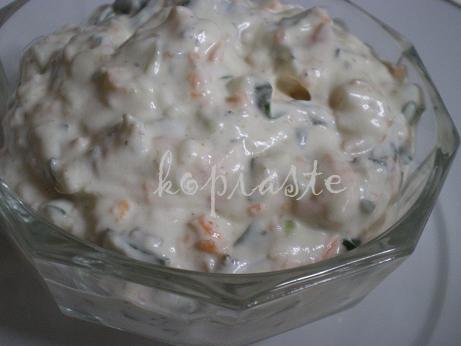 The carrot tzatziki was great but I remembered that I saw purslane and yoghurt together so I got the idea of trying it with new ingredients so I finely chopped the purslane and mixed a small quantity of carrot tzatziki with the purslane and tried it. I wanted this sauce not to remind tzatziki and as our dinner was sheftalia and pork chops in Pita bread, I decided to make the sauce hot, so I added the hot chilli and some paprika.

Tip: If you do not have drained yogurt, place the yogurt in a large square of double cheesecloth. Tie the cheesecloth over the sink and let any excess liquid drain for about 4 hours.

There is an explanation about this.

Don’t ask me why.

Val, what a waste. It's a pity to get food for free and to use pesticides or whatever to destroy them.

Purslane is something here that grows in our lawns.Unfortunately it would be sprayed as a weed in the ever increasing desire to have a weed free and perfect lawn which is the "keep up with the Jone's" mentality.I had read that it is a desirable weed as well as dandelions which are also nice in salads. Maybe some of the organic farmers might have it at the market:D

Thank you for visiting Sam. I shall be glad to see you again.

Lulu you are welcome any time you need some help. You are doing a great job.

It has been a little while since I visited your blog, Ivy, but I see you have been busy! Great stuff! I love glistrida!