Vassilopita is a traditional Greek cake or bread with a coin inside, named after St. Basil, which is made for New Year’s Day.

Vassilopita can be made in two ways: one is a sweet kind of brioche bread called “tsoureki” and the other an orange flavoured cake.

According to the tradition, whoever finds the coin is considered to be the lucky person in the family.

Traditionally, the Vassilopita cake is cut by the head of the household into various pieces.

The first piece is allocated to the church (Holy Trinity and Virgin Mary), to the poor, to the seamen of the family and to family members who live abroad by degree of relatedness, then to the head of the household (male), his wife, their children (oldest to youngest), then to guests.

The coin or small medallion, called flouri, is a tradition symbolizing an extra measure of good fortune for whoever gets the piece where it has been hidden during or after baking.

In order to give more joy to the children some families also place a prize to the coin, so apart from a Christmas present the “lucky one” always gets an extra present as well during New Year.

Icing sugar is usually dusted on top of the cake. My mother would add blanched almonds on top to form the number of the New Year.

This year’s Vassilopita was decorated by my 13 year old daughter, who decorated the cake with Royal Icing.

Let’s see how this tradition started!

Two saints are involved in giving presents to the children, two different persons, both of Greek origin and who were both bishops. One is St. Nicholas or Santa Claus for the West and the other is St. Basil, (in Greek Aghios Vassilios) or as he is also called Basil the Great, for the Orthodox.

Whoever Father Christmas you choose, St. Basil, from Caesarea or St. Nicholas, from Patara, they will live forever in our hearts to remind us of the great things they did.

St. Nicholas, was born at Patara, Lykia around 250AD, and became Archbishop in the city of Myra, in what is now Turkey, near Attalia, but which used to be part of Greece.

He loved the poor and helpless.  He helped the poor by building shelters, poor houses, hospitals as well as other philanthropic institutions in his parish. We celebrate St. Nicholas Day on the 6th of December, the day of his death, and  he is the patron of the children, the poor and of the seamen.See the whole story of St. Nicholas here.

The first Europeans who arrived in the New World brought St. Nicholas with them. They mixed various ancient myths and surrounded him by elves, fairies, a sleigh pulled by reindeers etc., and have set his home in the North Pole, a fascinating story which even the grown ups like.

His image as a fat man with white beard, round glasses and red clothes was created by a Coca Cola advertisement back in 1931.

St. Basil, on the other hand (in Greek Aghios Vassilios) lived in Caesarea, the capital of Kappadokia, which again was part of Greece.  He came from a family who were also very religious.  His father, who was also named Vassilios, was a rhetor and a lawyer and his mother was a very wise woman.His grandfather was a martyr, his brothers Gregorios and Peter were Bishops of Nyssa and of Sevasteia, respectively, his sister were dedicated to God and his sister Makrina is also a saint and who is the one who convinced him to devote himself to the Christian faith.  One of his other brothers was a hermit in the dessert of Pontus.

St. Basil was born in 330 A.D. and studied philosophy in Athens, Greece.  During his short lifetime he gave away all his property to the poor and did not keep anything for himself. The greatest of the things he did was to organize charity in his district.  He would distribute clothes, food, money and any other help to those who needed it. He built close to Caesarea a city full of charitable institutions, hospitals, orphanages, hostels, homes for the elderly people etc., and he was named Vassilios the Great from the time he was alive. He died in December 378 (48 years old) and was buried on the 1stJanuary 379. It is said that people loved him so much that during his funeral apart from others fainting, some people died as well. The city he built was named after him, Vassiliada.

We commemorate his death on the 1st of January and we bake a cake which we call Vassilopita (the pie of Basil) in which a coin is placed inside.This tradition has to do with the following story:

During his lifetime, St. Basil was not afraid to confront even the emperor.  Although Ioulianos, the emperor of Byzantium studied philosophy together with Vassilios in Greece, he worshipped the ancient Gods and hated Christians and was always trying to find ways to humiliate Vassilios.  When the Byzantium declared war against the Persians he passed with his army from Caesarea.  He ordered his men to impose taxes on the people, which he would collect after returning from the war.  People were forced to give away money and jewellery.  Ioulianos, however, never returned because he was killed in the war so whatever coins and jewellery were gathered, Vassilios distributed the half to the poor, some were kept for the institutions at Vassiliada and the remaining he ordered to bake breads for all the citizens.  In each loaf he would place either a coin or a piece of jewellery inside the loaves of bread, for the people to find something in their bread and also to be fair with the distribution.  The bread was then distributed to everyone in the area and to remember this we place a coin in the Vassilopita.

It is a tradition on New Year’s Eve for the children to go from house to house and sing Greek New Year’s Carols, called “Kalanta”. 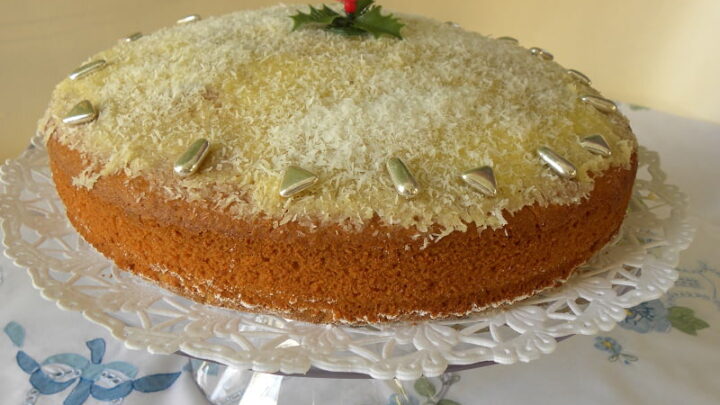 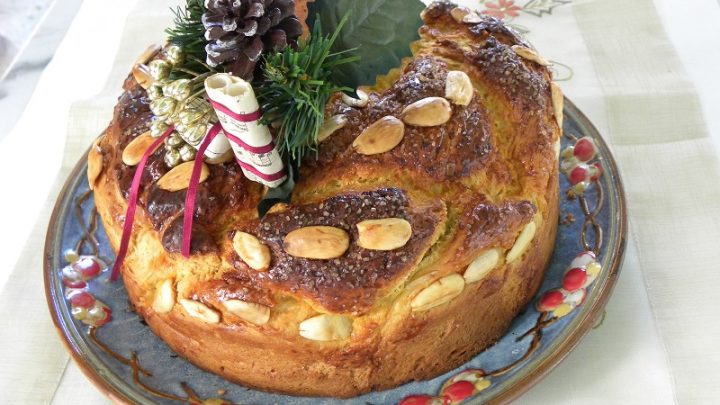 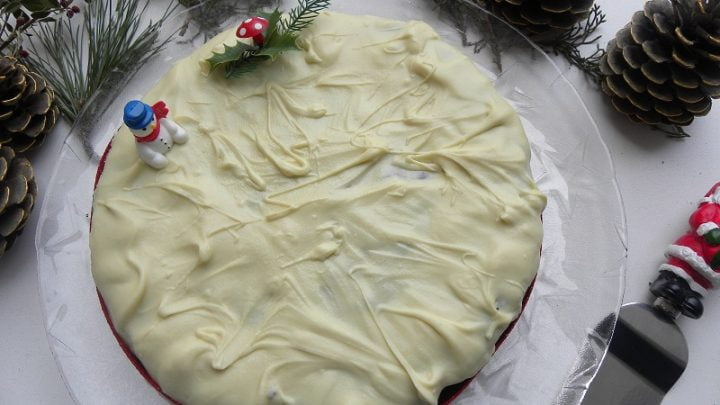 Vassilopita is the Greek New Year's Cake with a coin in it.  This year I made a Grand Marnier Vassilopita topped with White Chocolate glaze.  It's easy to make and so aromatic. 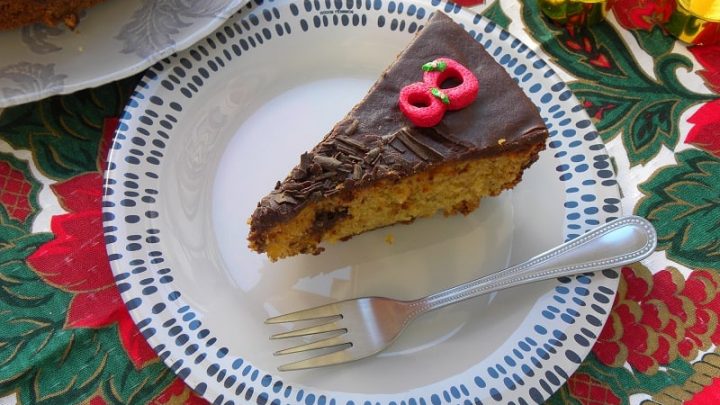 This delicious Chocolate Almond Raspberry Coffee Cake  is moist, buttery, nutty and is great for all occasions.  It is simple and easy to make and tastes amazing! 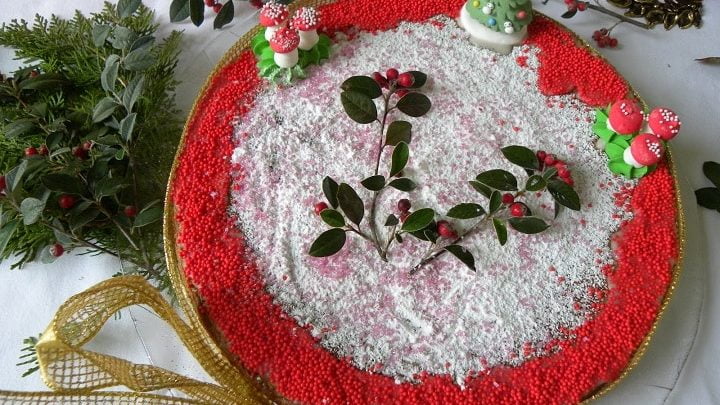 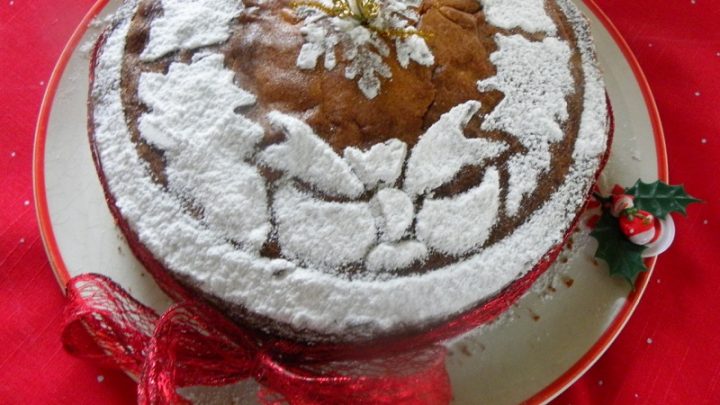 A delicious Vasilopita Cake, infused with the aromas and blends of orange and almond, to celebrate the coming of the New year! 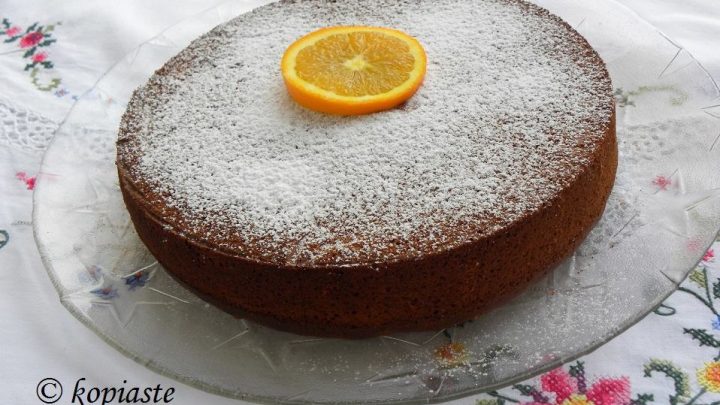 What a lovely and delicious recipe. Thank you for sharing it with us. I can't wait to try it.

Ill have to try this recipe soon, thanks for sharing.

Thank you for keeping our traditions alive. I will surely make this.

Happy New Year to you Ivy!!!! many happy hours of baking and cooking:)

the cake was delicious...i made it with orange juice and rind of orange..it was ever so nice....today is the second of january and i have only two portions left..it was very nice....i would make it again but i think with chopped rather then ground nuts...just for a change..:)

Happy New Year to you and your family as well Eva. I do this cake over and over all year round and of course you can cut almonds or omit them, if you like.