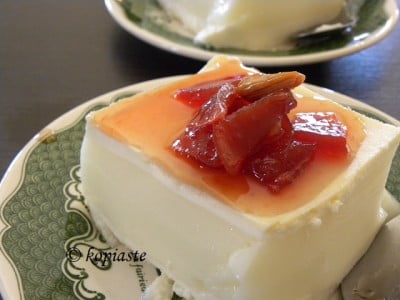 This recipe started when I attempted to make mozarella cheese and failed!

It’s not the first time that amazing recipes are created after an unsuccessful attempt to make something else.  Technically this is not the traditional panna cotta made with full fat cream but a much lighter version made with two kinds of milk and heavy cream. 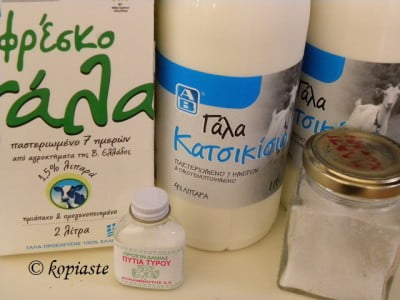 It all started when I went to the supermarket in Nafplio.  When buying milk I saw how cheap AB Vassilopoulos has the milk.   Its price was 0.95 Euro a litre, considering that when I run out of milk in the village I buy it 1.60 Euros a litre!!  That’s the cost of living in a touristic place.  Anyway, I saw that the goat milk was also cheap 1.99 Euro a litre, so I got four litres of low fat milk and 2 litres of goat milk with the intention to make mozarella and the rest for our daily needs.  I had brought some rennet from Cyprus and the idea of making cheese was spinning in my mind for some time now, only I did not manage to find a source for fresh ewe’s milk yet.

I don’t know what went wrong because when reading various recipes I did read that the milk should not be pasteurized but then when I made halloumi, I did use pasteurized milk and it worked.  I don’t know if the milk I used with 1.5 fat was the problem although the goat cheese had 4% fat.

Anyway after waiting for half an hour to see curds, and then half an hour more and getting no results I decided that my attempt had failed.  Instead of giving up I decided to add 330 ml heavy cream, add more rennet and give it another try. 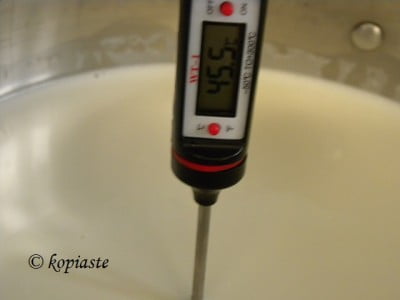 I repeated the procedure by heating the milk and adding the rennet and waited again.  I waited and waited more.  I spent the whole afternoon waiting for the curds to form.  They were not as thick as I wanted.

It was hot, I was tired and I wanted to go to the beach, so I decided I would not spend any more time trying to make cheese.

There I was with four litres of milk with 330 ml heavy cream with partly formed curds.  Would I through it away?  No way!  The first thing that came to my mind was to make Panna Cotta.   I was lucky enough to have gelatine at home but it was not enough for the entire quantity.

I calculated how much milk I needed for 22 sheets of gelatine and measured the milk.  I used less than half the amount of milk which I heated.  I put the gelatine leaves in a bowl with cold water until they became soft.

Meanwhile when the milk was warm I added 200 grams of white chocolate and 10 drops of vanilla essence and stirred it until the chocolate melted.  I then added the gelatine leaves and and mixed until they dissolved. 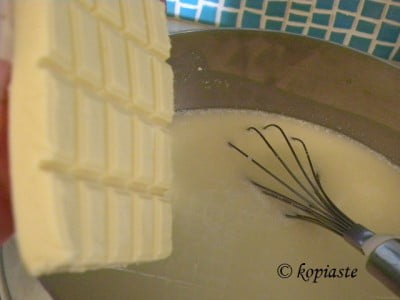 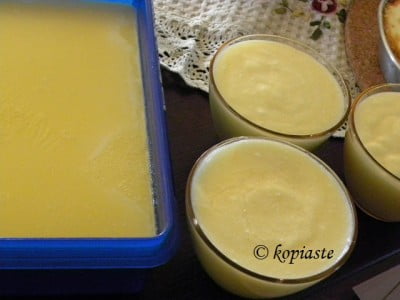 When we came back from the beach it was still lukewarm.  I refrigerated it and next day the dessert was ready. 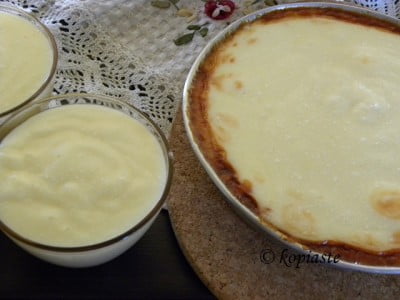 No other sugar was added apart from that in the chocolate.  The cream was slightly sweet but served with spoon sweets (fruit preserves) it becomes just perfect. 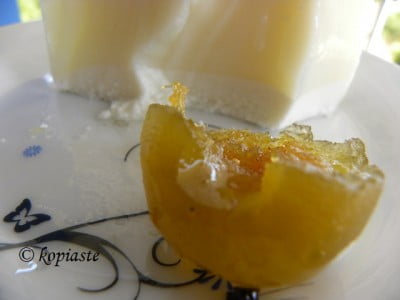 I cannot understand the chemistry which made the cheese sink to the bottom and the white chocolate on top leaving the Panna Cotta in the middle but whatever did it, the result was amazing!  Such a light and refreshing dessert which has this wonderful taste of goat milk, chocolate and vanilla.

Each day we try it with a different fruit preserve.  I’ve tried it with fig preserve and quince.  Both amazing but imagine it with cherries, sour cherries… or green seville oranges!

I know that you will not go through this procedure to make this dessert but next time I make it, here is how I would make it: 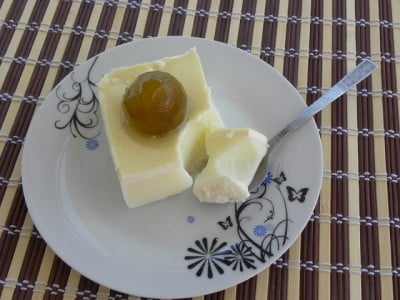 How to make Paneer

I also tried to make mozzarella and failed... A wonderful way of using all that goat milk.