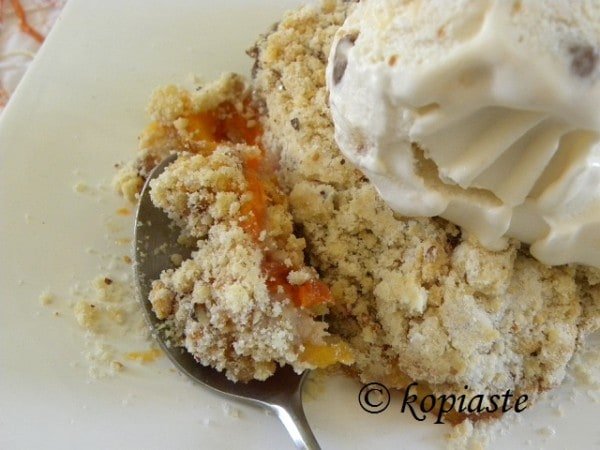 Making cobblers, crumbles, crisps,  etc., I think is the best way to use leftover fruit.  The distinction between them, however, has given me headaches, so lets see what these are.

When I go to the farmers’ market I get carried away and sometimes I buy more fruit than we eat.  So before they perish I end up making crumbles, at least that’s what I call them.

Some times I improvise and instead of using regular butter I also mix it with a little bit of sheep’s and goat butter and the crust tastes like kourabiedes or I use some of my preserved fruits and syrup.

But what exactly is the difference between a cobbler, a crisp, a crumble, clafoutis etc.  I have been seeing these names and been wondering, so I google searched it and here are a few interesting things about them.

This information may also help you decide what you are baking:

Betty — a baked pudding made of layers of spiced and sugared fruit and buttered bread crumbs.

Clafoutis — a French cobbler, with fruit (usually cherries) on the bottom, custard, and a rough batter crust baked on top

Cobbler — a spoon pie (more like a fruit stew with dumplings), in which biscuit dough is dropped onto the fruit before baking. The consensus is that the dish got its name because the lumps of cooked dough resembled cobblestones.

Crisp — a deep-dish fruit dessert made with a crumb or streusel topping and baked.

Crumble — a British dessert in which raw fruit is topped with a crumbly pastry mixture and baked. One reference says a crumble is like a crisp, but not as rich.

Grunt — a spoon pie, with biscuit dough on top of stewed fruit, which is steamed, not baked

Pandowdy — a spoon pie, with fruit on the bottom and a rolled crust on top, which is broken up to allow the juices to come through

Slump — a spoon pie, including cooked or uncooked fruit topped with biscuit dough or piecrust, which can be baked or steamed, and can be made upside down. 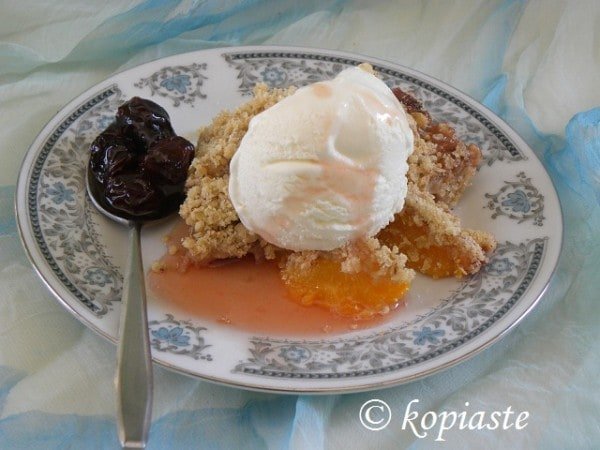 Note:  If you do not have cherry syrup, you can increase the amount of sugar and water by 1/3 cup each. 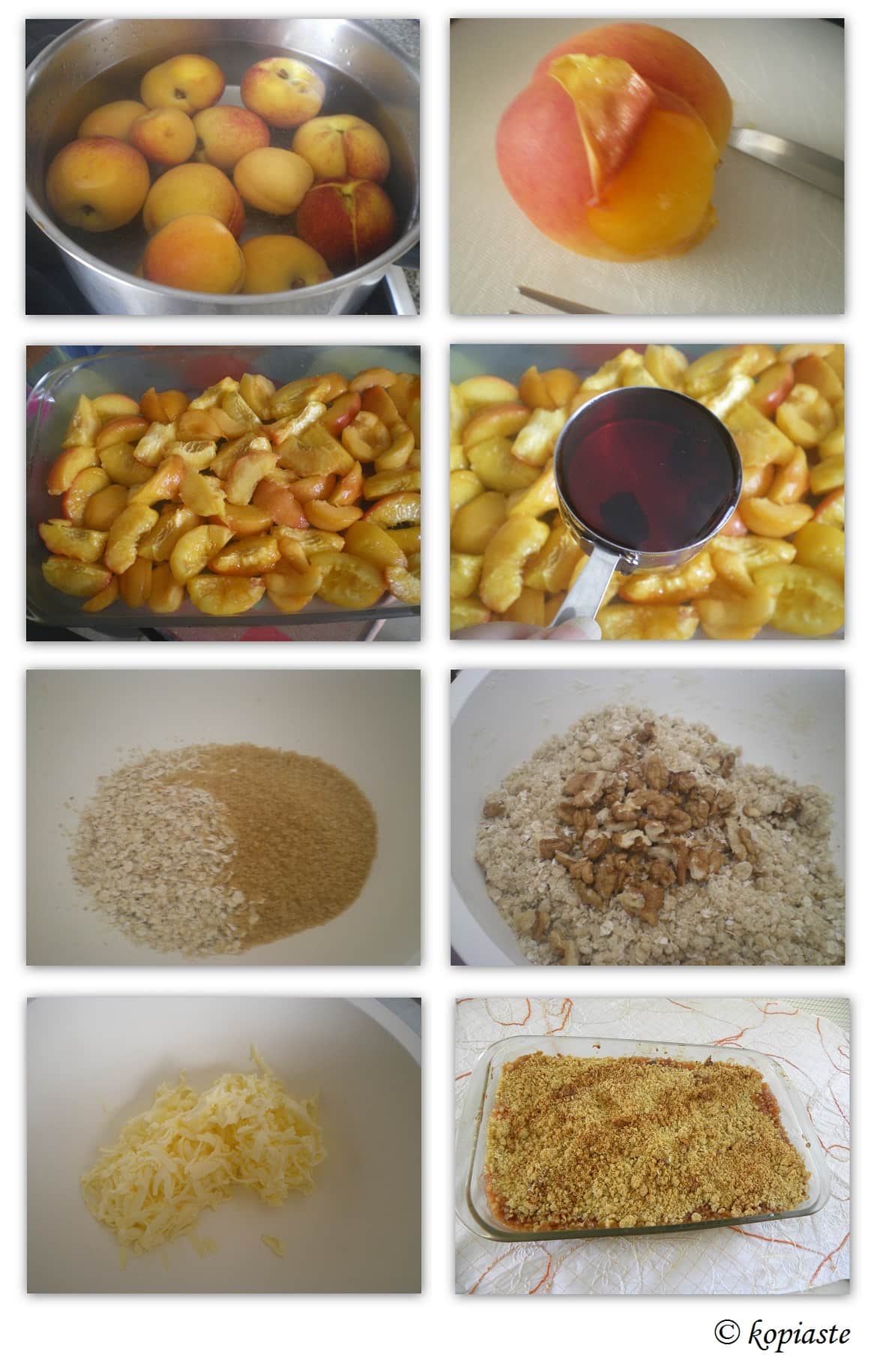 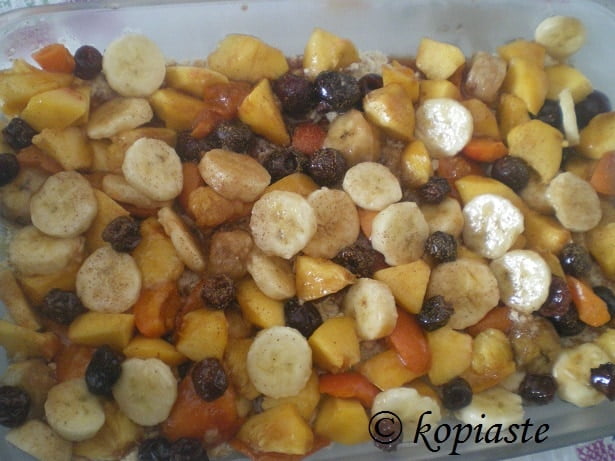 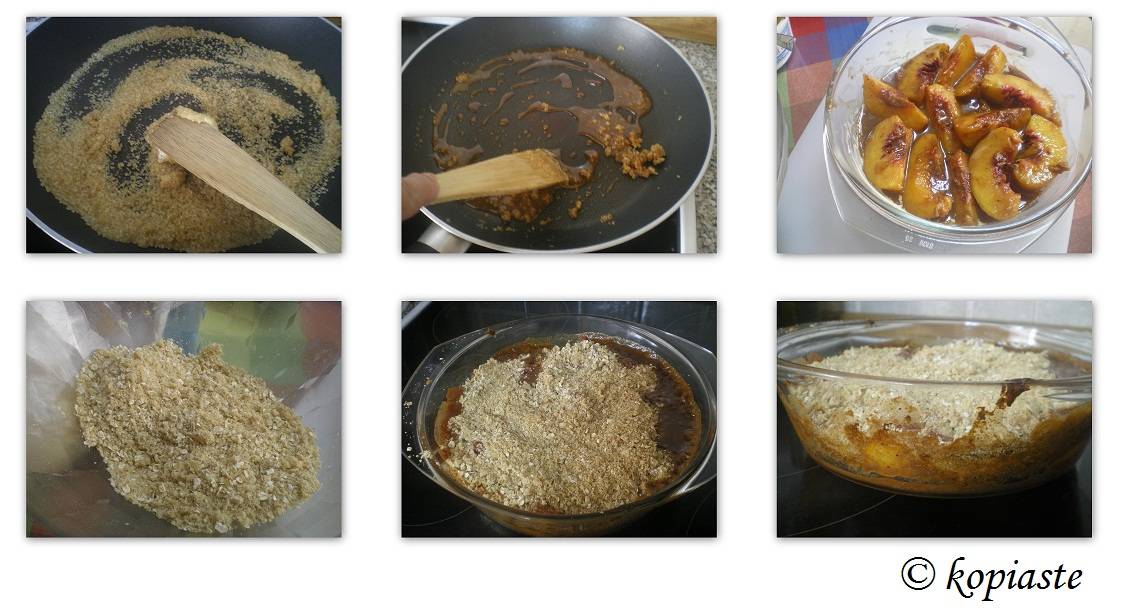 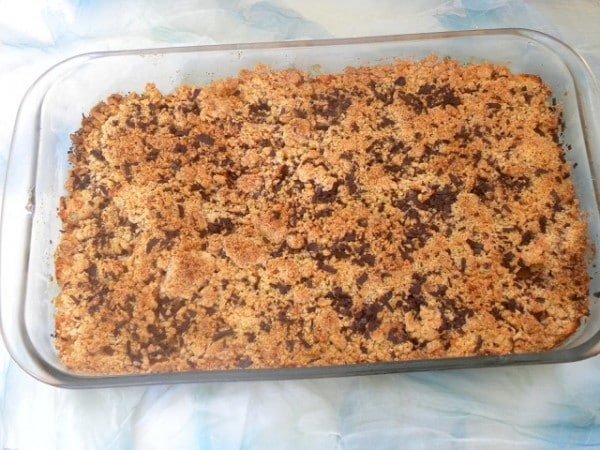 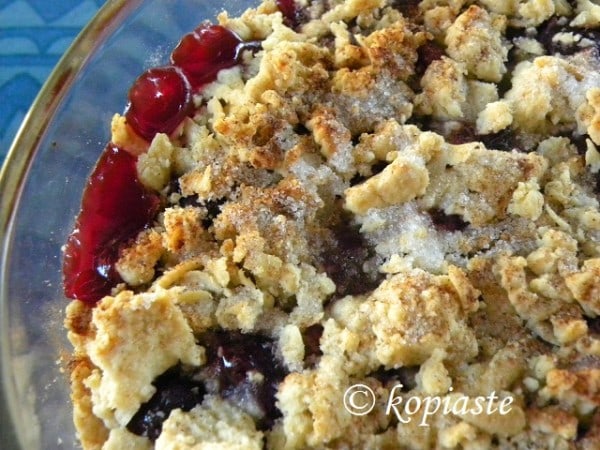 The following recipe is not exactly a Clafoutis but neither a crumble.   I made the recipe up but I will call it Clafoutis because of the filling. 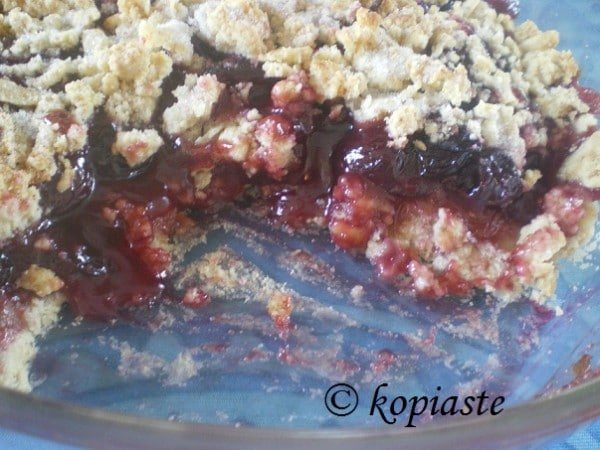 What happens when you make a recipe you don’t like?  Do you through it away?

Surely not!  When I made this crumble, the fruit were tart and the filling was not as sweet as I expected it.    We tried adding some icing sugar on top of the crumble but it didn’t change anything.  We then tried another piece adding honey but still the fruit remained tart.  So here is what I did to salvage the dessert and a new recipe was created!

I do not have an ingredient list to give you, as when making the first dessert, I did not intend to post it, as I have already posted too many crumble recipes! 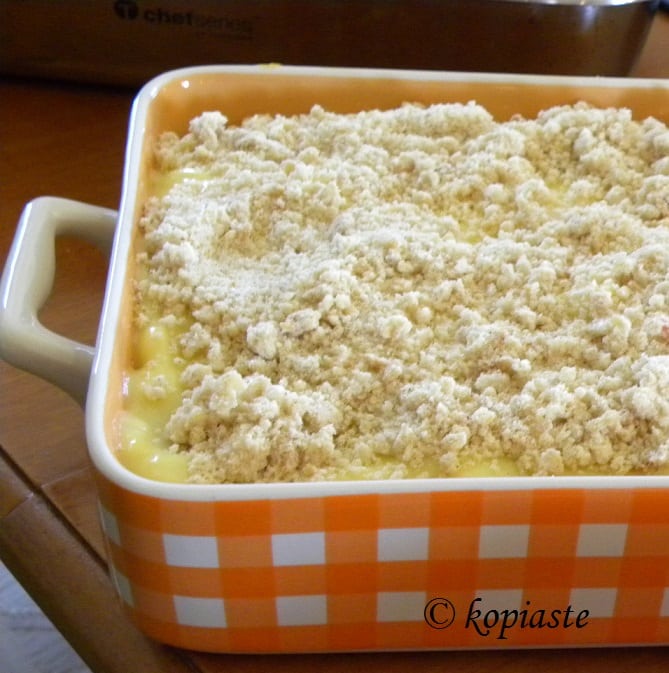 Chose whichever recipe above to make the filling and the crumble.  Instead of sugar, I added petimezi (Greek concentrated grape juice-molasses), like I did in this recipe.

After cooking it and tasting it, the next day I removed the crumble on top and mixed some honey in the fruit.  The amount will depend on how sweet we can it.

The crumble was made with ewe’s butter, similar to kourabiedes.

I prepared a pastry cream, which I made a little bit sweeter, adding 2 more tbsp sugar.

I let the cream cool and then refrigerated it until the cream set.

It turned out delicious and was a wonderful, refreshing summer dessert! 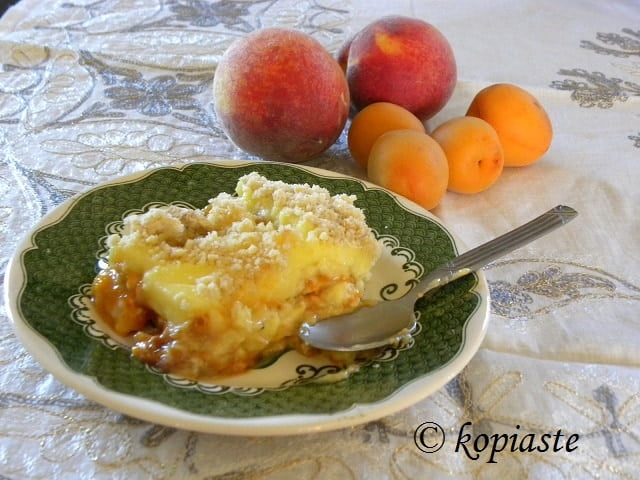 So many special touches in these desserts besides your typical fruit like peaches or berries. I've never before seen a cobbler or crumble with coffee liquor--- or chocolate. Or even bananas. Very creative, looks great!

I love fruit desserts SO much, so I'm a big fan of this post! Crisps are my favorite!

Love anything with seasonal fruits and crisp topping!

I didn't realise there are so many names for what I would call a crumble. Your peach crumble looks delicious.

Great, informative post Ivy! There are so many definitions of this humble dessert that it gets quite confusing! All your variations look delicious! Bravo!