This braided Savory cheese tsoureki is made with tsoureki dough and a filling made with cheese, eggs and mint.

I’ve been making tsourekia for years and when a recipe is tried and tested and good, I do not see any reason why changing it.

However, things do happen in the kitchen.

Holy Thursday is the day we dye our Easter eggs and do most of the baking, so as usual, yesterday I dyed some eggs, made flaounes and made the usual recipe for tsourekia.

However, I also like improvising, so while doing some stuff like kneading or waiting for the dough to rise, or while washing the dishes, my mind never stops thinking of things like “what if I do this.. or what if I add that”.

This is the part of cooking or baking I love most:  to be able to  have a white canvas on which I can get inspiration from around me and create new things.

Since it was not supposed to be a recipe to post, I did not take any notes on quantities used.

I prepared the chestnut puree early in the morning this time adding an equal amount of sugar and honey, vanilla essence and enough milk to cover the chestnuts.

When I drained the leftover milk, it was about 1/4 of a cup, so instead of boiling water with anise seeds I decided to add it in the dough, together with more milk, as it would add extra flavour to the tsoureki.

While I was making flaounes, the idea of making a savory tsoureki popped into my head.

In the recipe I am giving you a simpler filling made with haloumi, mint and eggs.

This brioche type of bread has sugar in it but  it is not very sweet.

Although I have not tasted it yet as I am fasting, I have no doubt in my mind that sweet bread with savory cheese will be a great combination.

This Savory Cheese Tsoureki is simply amazing!  You can’t even sense the sugar in the dough.

It’s mostly the sweet filling which sweetens it up and I realized that while eating the savory one and the one made with chestnut filling, for breakfast.

To make the bread, you can follow the recipe for Tsourekia I have already posted in the past.

Instead of braiding the tsoureki the normal way, I followed a different method, which is perfect for adding filling and also the result is very impressive.

How to make the cheese tsoureki

Prepare the dough and set aside to rise.

When the dough rises, divide it into two equal parts.

Roll out each part about ½ cm thick, trying to give it a rectangular or oval shape.

Lightly score the dough as a guide leaving a margin of about 7 cm on each side and 3 – 4 cm on top and bottom.

With a sharp knife cut outside the scored area around 10 strips at a angle on both sides.

Place the filling in the center, leaving a gap, around 2 cm on each side.

Line a baking tin with parchment paper and place each braid in it but not too close to each other. Cover with cling film and then cover with a napkin and it must rest to rise for about an hour, in which time it will rise again.

Brush with the egg-milk mixture on top.

My best wishes to all my Orthodox readers and friends for a Happy Easter and to the rest of you a wonderful weekend!

The amounts given above are just a rough estimate. To make the tsoureki dough just follow the instructions for my recipe Tsoureki with Chestnut filling.

The above filling is for two savory tsourekia. 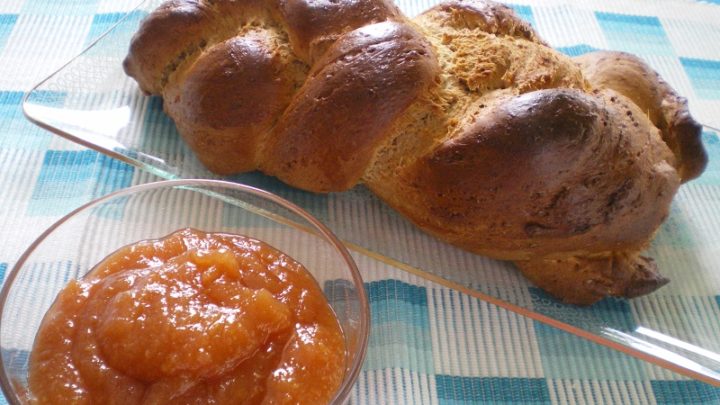 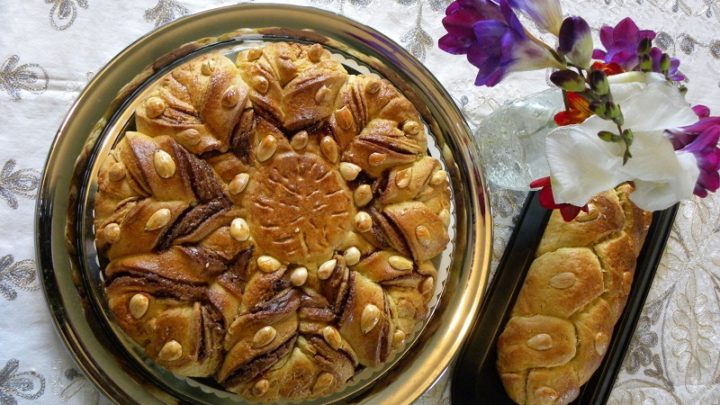 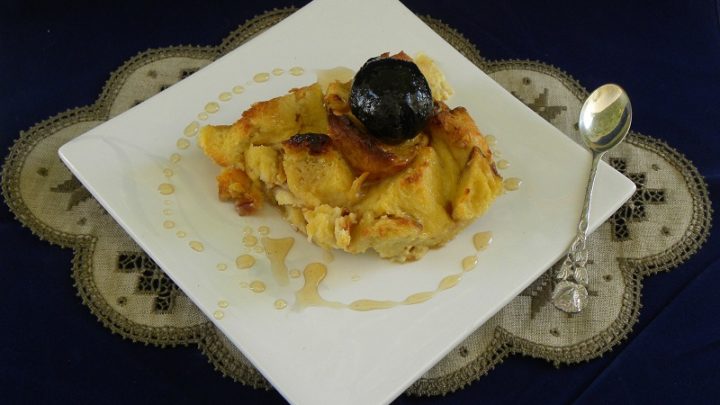 Tsoureki Pudding and Other Bread Puddings 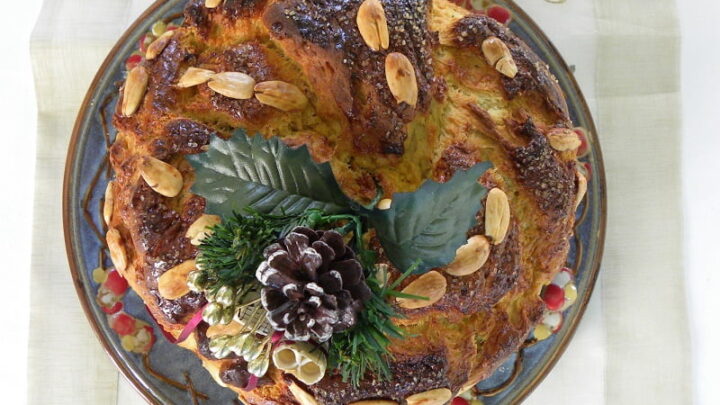 This is my kind of bread too. Soft, sweet and savoury...great for the breakfast.

Both the tsoureki and the colorful eggs look beautiful. Happy Easter!

The braid looks fabulous and I love the cheesy filling!