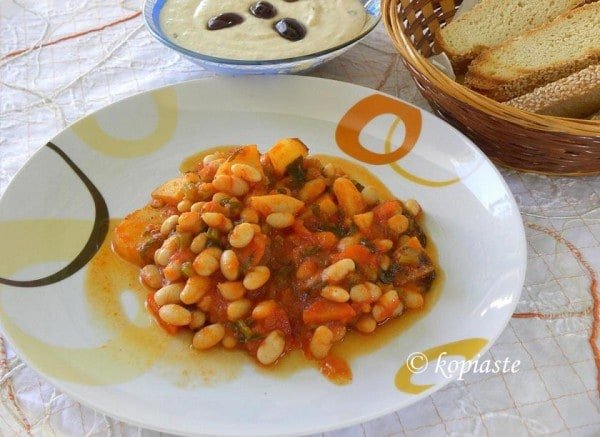 Fassolada is considered to be the national dish of the Greeks because the Greeks survived those poor years eating dried legumes and vegetables.   Meat was eaten rarely and only on special occasions.  Even until early sixties,  meat was eaten only on Sundays but after a few decades of prosperity we are back to “psorokostena” and trying to live on a budget again.

Before going to the recipe, you may have seen this dish written as fasolada with one “s”.  I write it with double “s” as according to English grammar rules an “s” between two vowels is pronounced as a “z” so it’s not fazolada but fassolada.  You may have also seen it written as “fasoulada” which although not wrong, no one calls it fasoulada because this is the way it was called by the peasants, ages ago. 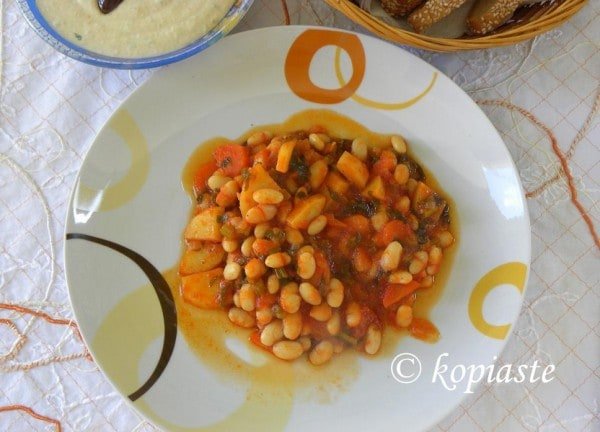 Instead of making the classic fassolada recipe which is a bean soup this dish is more like a stew as I baked it a casserole dish but you can also cook it in a dutch oven.

Fassolada is a very healthy and nutricious dish ;  it is rich in protein and fibre, and will even help you loose weight if following the  Mediterranean Diet. We should eat dried legumes at least three times a week in order to benefit from its health effects.   Greek food is simple and the only spices used in this dish is salt, pepper and bay leaves.  We are lucky because our vegetables still have flavour but most of  its flavour comes from the olive oil used in all Greek dishes.

This dish is very easy to prepare and you only need ten minutes to prepare it and you only have to mix it once.   The past months I’ve been adding tomato paste in my sauces and I have noticed that the dish not only have a better colour but also it enhances the flavour of the sauce as well. 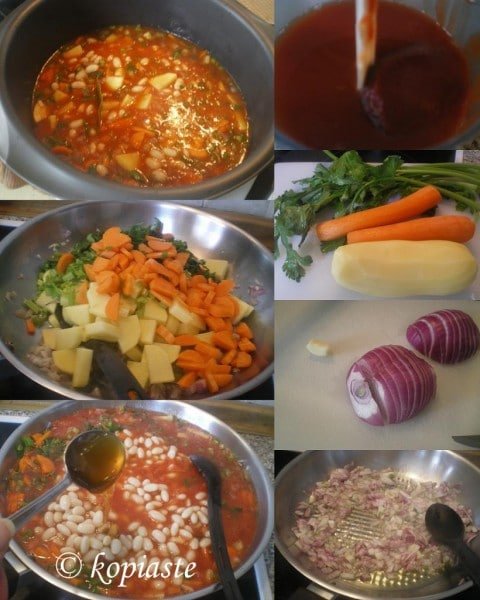 Tip:  When using tomato paste and have leftover, bring it back to a level surface and add a layer of olive oil on top.  It can be preserved in the refrigerator for a very long time.   Each time you use some, try getting it from below and then levelling it again.  The oil will come back on the surface and if needed add some more.

One thing I forgot to mention in my post for Nafplion was about Psorokostena, which is  a disparaging noun Greeks use to label Greece’s perceived socio-economic limitations.

During the Ottoman occupancy, the Greeks were very poor but also after the Independence people lived in poverty for many years.  One day in 1826 they gathered at the big square of Nafplion, now called Syntagma Square and people were asked to  contribute whatever they had to liberate Messolonghi.  The poorest woman in Nafplion was called Hadjikostena and she was the first to take off her silver ring and a “grossi” which was a turkish coin of minimal value and offered them for this cause.  The people exlaimed “Look, even psorokostena (the word “psoro” has the meaning of poor)  is contritubing and from this incident this newly founded poor state of Greece was called “psorokostena”. 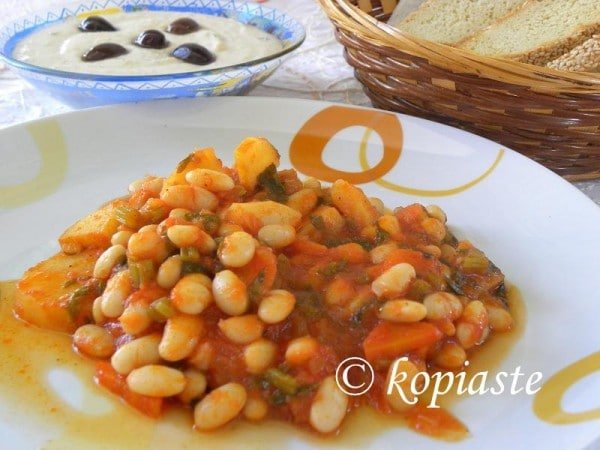 Fassolada me Loukaniko (beans with sausage)

This reminds me of your fassola gigantes recipe since I can't get those large beans where I live I use regular haricot ... so it seems I have been making this recipe all along! I really love it! All the recipes of yours I have tried have come out delicious Ivy! Thank you again for sharing your talents!