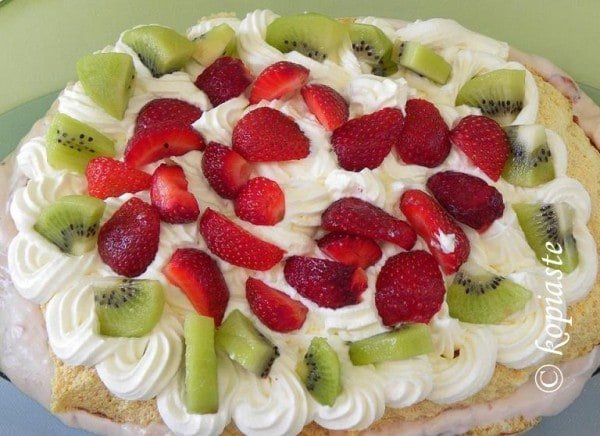 Back in February, Cakelaw, of Laws of the Kitchen, who is from Australia and is a lawyer, posted a recipe named Rhubarb, orange and yoghurt cake for an event called “In the bag”.I commented on her recipe and told her that I did not know what rhubarb was.Cakelaw immediately, without second thought,e-mailed me and asked for my address as she wanted to send me some to try.We exchanged addresses and in no time a package arrived.Cakelaw sent me a bottle of rhubarb sauce and a note saying that she wanted to send me some rhubarb jam but as she could not find any she sent me the sauce.

Thank you so much Cakelaw, hope you’ll find my package when you return from your holidays.

Still I did not know how to use it but reading more carefully the instructions behind the bottle, it said that it goes well with Pavlova.I had heard of this dessert but had never tried it so I made a little search in the internet and when I read the recipe I knew I would love it.A dessert a chef named Herbert Sache created in 1935 in honour of the great Russian ballerina, Anna Pavlova, who was visiting Australia at the time. However, there is a dispute between Australians and New Zealanders as to who created this wonderful dessert.

When I received the package my sister was visiting me from Cyprus so one nightI invited some friends for diner and decided to make Pavlova. I had never made a meringue cake before as my old mixer would not beat the eggs properly and part of the egg white would remain just as I put them in. However, as it was the first time I made it I was really afraid that it might not turn out very good, so just in case I had a back up dessert as well.Needless to say that they were all thrilled when they tasted it.“So light and tasteful”, as they told me.They all asked for the recipe. This cake may resemble in appearance to my Torte Fragole but believe me it is the most decadent cake I ever tasted.

The only changes I made to the recipe was to add lemon instead of white vinegar as I did not have any at home and while reading other recipes I saw that they used lemon as well.In my recipe I used 6 egg whites.

I decorated it with strawberries and rhubarb sauce, not too much because I did not know if they would like it but we all liked it very much.

However, for those who cannot find any rhubarb sauce, you can serve it with the two sauces, I posted early this week. Strawberry sauce or Kiwi sauce or both.

(In the picture, a newer version of Pavlova I made with strawberry pastry cream sandwiched between two meringues and served with strawberries and kiwis).

The only thing I want to draw your attention to is that you can prepare the meringue well in advance, even from the previous day but add the whipping cream and fruit just before serving as the meringue will immediately start to soften and break down from the moisture of the cream and fruit.I was a bit shocked when I saw this happening to mine as it was beginning to flatten from one side but we ate it in time.

I am also submitting this recipe to Mike, of Mike’s Table, who is hosting the event Strawberry Seduction as he has requested us to send more than one recipe.

Beat the whites of eggs with a pinch of salt until stiff (until peaks form).

Pile mixture into circular shape, making hollow in centre for filling.
(Mixture will swell during cooking), (I placed it with a spoon, making peaks).

Turn oven off, leave pavlova in oven until cool.

Sorry I do not have many photos for this recipe but I had so many things to cook that day that I just remembered to take a quick photo of the cake just in time before we devoured it.

Hey Ivy, would you like to make an exchange of packages? anything in particular? I would love to try something Greek!!! Let's fix a price and do it!!!!What do you say?

Ivy- I'm going to hopefully send you an email during the week- if i forget for some reason please remind me!!!