Melitzanes Papoutsakia (pronounced pah-pou-TSA -kya) are stuffed eggplants with meat sauce, topped with a rich bechamel sauce and then baked.

The ingredients are almost the same with “moussakas” but they are made into individual servings.

The  words “melitzanes papoutsakia” in Greek means little eggplant shoes and probably they are named after their shape.

To me they resemble like the balarina shoes my daughter used to wear when she went to ballet when she was younger.

When discussing the name with my daughter, she played around by adding a cucumber for the heels and a bow made of spring onions 🙂

There is also a meatless recipe from Mytilene island called “skafoudes”, which means boat.  The filling is made with eggplants, which is removed to make it hollow and instead of adding bechamel on top they add grated local cheeses mixed with eggs.

Most of the Melitzanes Papoutsakia recipes I have read want the eggplants to rest in salty water for an hour in order to remove the bitterness.   This is wrong because the new varieties of eggplants rarely have any seeds and are not bitter (at least here in Greece).

Depending on the recipe, if  we want the eggplants not to excrete any fluids, we cut them into slices and sprinkle them with salt.  We then let them sit in a colander for half an hour and then wash and pat dry them.   This way some of the moisture is drawn out.

Personally I don’t do this because it doesn’t bother me.  For instance if I am making moussakas, I add some potatoes, which absorb most of the liquid.

However, for papoutsakia, when they are baked, if there is a lot of fluid, just remove the eggplants to a platter or remove the juices immediately with a spoon, before they become soggy.

The eggplants are usually fried so they absorb a lot of oil.  When I was on a diet, I  skipped the frying part in order to avoid too much oil by brushing them with olive oil and baking them but this takes a lot of time.

However, I’ve learned over the years that I can control the amount of oil used, if I use a non stick frying pan and add the oil gradually.  This way much less oil is used than if frying them in a lot of oil.   I then put them on kitchen paper to absorb any excess oil.

You will probably think “what a waste”!  However, you can use the flesh in recipes, such as in pasta or make a different “melitzanosalata” (eggplant salad) which is a twist to the classic one.

A twist to Melitzanes Papoutsakia

Based on this recipe when I made them again, I scored them horizontally and vertically and brushed them with olive oil and baked them until they became soft.

You know when they are ready when testing with a fork.

I made a cavity by pressing them with a fork and added some of my Spicy tomato Sauce  on top.

After sauteing an onion and garlic, I added the minced meat and after sauteing it, I added some of my Spicy tomato Sauce and cooked the meat sauce.

Finally, I also topped it with a different bechamel sauce, using semolina, instead of flour, which makes it a little bit more grainy but still delicious.  Just substitute the amount of flour with fine semolina.

The result was excellent! 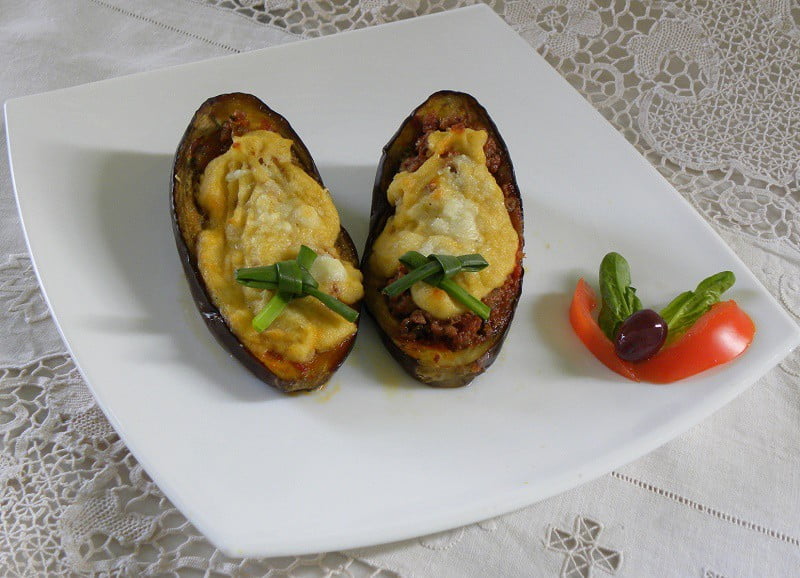 CAN I MAKE MELITZANES PAPOUTSAKIA VEGETARIAN OR VEGAN?

Yes, definitely. I have made them vegetarian and vegan many times.

To make it vegetarian, just substitute the meat sauce with this vegetable sauce, which I used to make my Vegan Moussakas.

To make it vegan, again follow the above link and add the faux bechamel on top.

For the Béchamel Sauce:

Hi Ivy, Fab dish, it's on my shortlist for a feature

Thank you Carole. Hope you enjoy it!

Very cute. My husband refuses to eat eggplant so I rarely get to indulge.

Wow nice Ivy ... somehow your pix are not coming out for me on mY PC but maybe it's issue on my side .. but love the recipe! Going to try this with last of the aubergines of the year!

Thanks Cynthia I have received them and shall read them right away. Thanks

Ivy, I've emailed you recipes for the chokas.