The word soutzoukakia derives from the Turkish soujouk, which is a dry, spicy, sausage and the Greek suffix -akia, meaning “small”.

The fact that it derives from the Turkish word does not mean, of course, that this is Turkish, as in Wikipedia we often see various things named as Turkish, when in fact they are not.

Smyrneika describes the origin, which is Smyrna.

Smyrna was situated on the eastern shores of the Aegean Sea, opposite Chios in Asia Minor, with mainly Greek population.

In the early 20th century; Smyrna used to be a large, rich and cosmopolitan Greek community, who were renowned for their trading achievements, mainly dealing in tobacco and was famous for its cuisine.

After the invasion of the Turkish army into Smyrna in 1922 and the burning of the city by the Turks, the entire Greek population was ejected from Smyrna and forced to seek refuge, originally to Greece and then to other countries.

It was not easy to estimate how many were the refugees but at the census of 1928 they estimated 1.069.957, not taking into account those, who in the meantime scattered all over the world, others to Cyprus, Egypt (Cairo and  Alexandria), France, United States, etc.  (Source:   Ardin – From the speach during the 80 years anniversay of The Destruction of Smyrna (2002), at the University of Piraeus, by Nikos Venetos)

Most of the refugees came to Greece;  We can recognize places where the refugees settled, by the names they gave to these places, where respective cities there in Asia Minor had the same name i.e. Smyrni became Nea Smyrni, (Nea meaning new) Nea Ionia, Nea Makri, Nea Philadelphia, Nea Chalkidona, Nea Erythrea, Nea Mychaniona, Nea Kallikrateia, Nea Malgara and innumerable other places.

The neighbourhood I am living in is called Kessariani, and is one of many neighbourhoods in Athens that the refugees from the destruction of Asia Minor, mainly from Smyrna, were settled here in 1922.

Most of the streets in Kessariani bear names of their lost homeland.

For those who love reading I would recommend Theo Halo’s Book “Not Even My Name” the true story of how her mother left Asia Minor, on foot, reached Syria (if I remember correctly after so many years of reading the book) married there and eventually went to the United States.

Recently there was a lot of argument and discussion about the new 6th grade elementary history book. Politicians want us to forget but we won’t. There are a lot of things to remind us about it, even cooking.

All the destruction of Asia Minor is described in the history book with two lines and I quote:

“On the 27th August 1922 the Turkish army enters in Smyrna. Thousands of Greeks are crowded at the port trying to get into ships so that they may leave for Greece…”.

The displaced Asia Minor Smyrna residents brought their customs and cuisine with them to their new homes. Soutzoukakia is one of the dishes that originated in Smyrna, and remains a popular menu item in Greek homes and tavernas today.

My older recipe has been removed.

You can find the new recipe here. 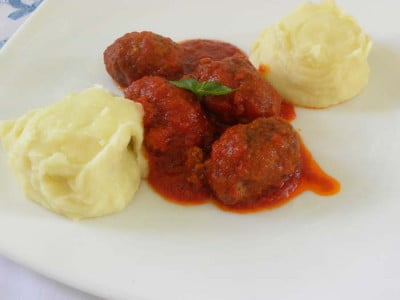 It seems that you have not studied history well or what they teach you is only what they want you to know. The Göktürks or Kök-Türks were a Turkik people in Central Asia and with the horde of Attilas conquered Europe and he is remembered as the epitome of cruelty and rapacity. You forget that Asia Minor was Greek. How was Anatolia Turkish? The same way that Constantinople is today. You forget how Constantinople was sieged in 1453. You forget how the contemporary Greek people of Constantinople were expatriated in the early sixties and their properties taken. You forget that Greece and Cyprus with a history of millenniums were under Turkish rule for 400 hundred years. Where were the Turks before that? And you now claim that “Ivy, if we look from the other side it can be said as half of the Cyprus is occupied by Greek. and also citizens of the Both side did cruelities to each other. We both know this. Greek also made harm to Turks there.” How did Cyprus come into the hands of Turks. Who bombarded Cyprus in 1963? Who invaded Cyprus in 1974? Who is violating the Aegean every day? Who put the flag on Imia? You should come back to my blog and say “We are sorry for all the atrocities we did to your people”.

Ivy, if we look from the other side it can be said as half of the Cyprus is occupied by Greek. and also citizens of the Both side did cruelities to eachother. We both know this. Greek also made harm to Turks there.

And my point was not this or towards you...

Things go at anger edges easily here as I see...

I mentioned about "Forgeting" because here Turks are Forgetting what the Greek do to them...

So when I'm talking to you, this is only Ivy, a human, a lovely lady whom I talk to. But when I read all these should I feel that you feel the same to me deep inside?

You don't have to reply this... So maybe it's really better to leave it there...

Just it's not objective to show only one side of events... That's why I wrote... And thanks for the reply...

I'd like to take interfere in this conversation -not on behalf of the other part, but of on my own-. My name is Elias (Ilyas in turkish) a Greek academic and with origing from Arcadia, south in Greece. I live in Europe, and 70% of my friends are Turks. We dine, and drink together, we celebrate together and we have respect for each-other. Nevertheless, some things have been done in history and these things tend to cause pain to people, especially when they occurred recently. In the matter of Cyprus, to make things clear; Greeks do not claim anything considering the Republic of Hellas (Greece) simply because Cyprus was an independent nation, state and country; both De Jure and De Facto as the Republic of Cyprus. Then, Turkey decided to invade. For any military declaration of war, must there be a standing Casus Belli, otherwise the war is deemed illegal, and condemned by the society of Nations. The official stand of Turkey was the "protection of its minority of the island" Now, please imagine; if Greece would invade Trabzon or Karadeniz, or Sinop claiming protection of the Greek minorities there, burning, raping and razing everything to the ground on their way there, occupy the De Jure state, and establish a puppet-country. Now -I'd like to believe- no one accuses the turkish people for all this. It was not Gem's, or Mehmet's or Ozan's fault why this happened, but you must also understand that there are people still alive that their house, property and estates got taken from them, their sisters or women got raped and children executed and it take more than a pinch of salt "to just get over it, and forget what happened and move on". Please mind that I am an atheist (so no religious bias here for me) and very open-minded in cultural matters. But Verba volant, scripta manent as those Romans used to say, so it is into someone's ethical right to claim atrocities that have been executed upon him.

If you read my resume you will see that I am Cypriot and HALF of my country is still occupied by Turks. I will NEVER forget what happened. 2000 Cypriots are still missing. Thousands of Cypriots are still refugees. I don't have anything against you, that's why I wrote to you in the first place but don't tell me to forget. So let's leave it there.

This was a pity for me to read this.

Many things happened in the history.

We can also tell how the Greek army sieged Anatolia (which was land of Ottoman Empire those times) with the help of British army after the World War the First, and we all know what armies do at wars. I don't think that it was easy for the natives of Anatolia when Greek, or British or French army sieged Anatolians home-land.

However since then many things changed, and even Europe has come to a 'peace' , and friendship 'era' even after one of the most violent war WW2.

I don't think that it makes sense to be fraigle about past. Because none of the nations or armies is innocent :)

I'm not telling these because of being a Turk. My ancestors comes from many parts, even from Moscow, Russia.

But the point of my view is that things get boring with similar angers. The arguments on language, and words, origines of dishes, desserts etc...

I've never found myself writing about how European armies came, and sieged Anatolia, and did cruelities here. And I don't think that I will ever want to write/talk about old angers, wounds, or sorrows which both part of Aegea had...

The world is on the edge of a new Era. And I hope that peace will really make sense to anyone breathing on earth.

With 'real' best feelings, and wishes...