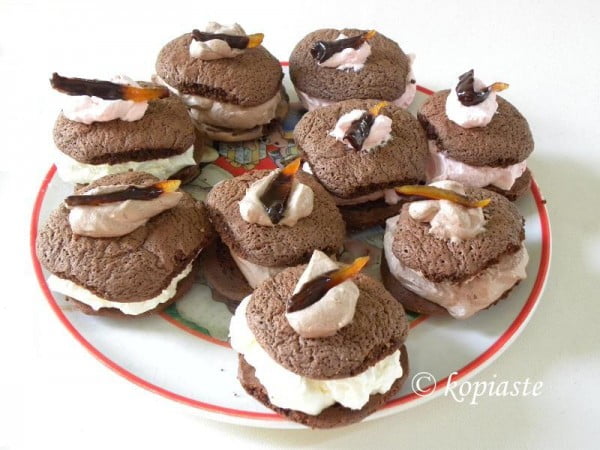 There always seems to be a new trend in baking and after the frenzy of cupcakes a couple of years ago, where everybody was making cupcakes and then last year with macaroons, this year I have read that whoopie pies  will be the new trend, so I am sure we will be seeing A LoT of them in 2011!

I read at Wikipedia that these started from the Amish community, which they made out of leftovers (and I like making things out of leftovers!!).  Woopie pies are not hard like cookies but the biscuit on top should be soft like a cake.  They are large, almost the size of a hamburger and filled with a marshmallows cream or a buttercream.   When the Amish husbands found one of these large sandwiched cakes, filled with cream in their lunchboxes they would shout “Whoopee” and I don’t blame them for that.

I read a few recipes, some were made using shortening, some had buttermilk in them, so I just made a cake mix of my own.  The biscuit/cake tasted wonderful and the only thing that went wrong was that they expanded more than I expected so they practically touched each other and are not perfectly round.  When making them,  make sure to leave at least 3 cm or 1 inch space between them.

I made the cookies 15 days ago when some friends told us they were coming to Athens from another town but they called us when I had already made the biscuits saying that something happened and were not able to make it.  As I had too many desserts at home I decided to put them in an airtight container and made them yesterday.

As I said above I always love to use whatever I have at home and especially make use of my leftovers.

On Monday I made Melomakarona but this recipe will not be posted as this year, I am really disappointed of my melomakarona.   I decided to give them a different taste and among other ingredients I used a liqeur which was too strong.  I am not giving up on the concept of this recipe which I intend to improve next year.    When making melomakarona, I did not throw away the peels but made them into caramelized orange peels.   After removing all the pith, I boiled them for half an hour.  I turned the heat off and rushed to an appointment I had and when I came back in the afternoon, drained them and added fresh water and boiled them again for half and hour and drained them.   I had leftover honey syrup from the melomakarona I made in the morning, so I made good use of that syrup and boiled the peels in the honey syrup, until it reduced to the consistency of caramel which together with pectin of the oranges became like a jelly when it cooled.  I put them on parchment paper with the caramel syrup and yesterday I dipped them in chocolate.

For the filling I did not make a buttercream filling as I am not really fond of buttercream and I don’t like using too much butter in one recipe, so I decided to use the cream cheese filling which we love.  When making the chocolate for the orange peels, I added more chocolate than I needed to have some to use in one of the fillings. This gave me the idea to use the leftover orange flavoured caramelized jelly as well.  I also made some flavoured with vanilla and to make some pink ones, I used a little of my pomegranate syrup asI don’t like using artificial food colouring.   I just scooped some of the filling on the biscuit as I did not have time to use the piping bag and make a better presentation.   As a last minute inspiration I added some filling on the top and decorated them with one orange peel et voila! 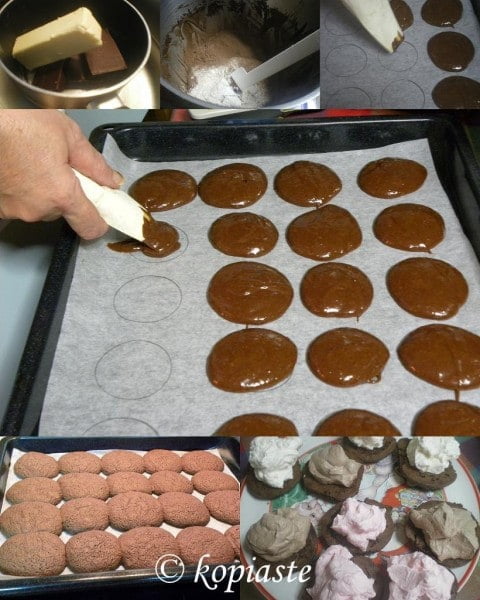 In a double boiler melt the chocolate and butter and set aside.

Sieve the flour, cocoa, salt and baking powder and set aside.

In you mixer, cream sugar and eggs until light and fluffy. Add vanilla and the melted chocolate a tablespoon at a time until  incorporated. Mix in the dry ingredients, until well combined.

Line your baking tin with parchment paper and using a round object (such as a cookie cutter or small glass or cup) draw circles 5 – 6 cm ( 2 – 2 ½  inches) in diametre, leaving about 1 inch between each circle as they will expand.

Fill a piping bag with the mixture and fill in the circles.

Remove to a wire rack and allow to cool completely.
At this stage you can store the cookies in an air tight sealed container for up to 10 – 15 days. 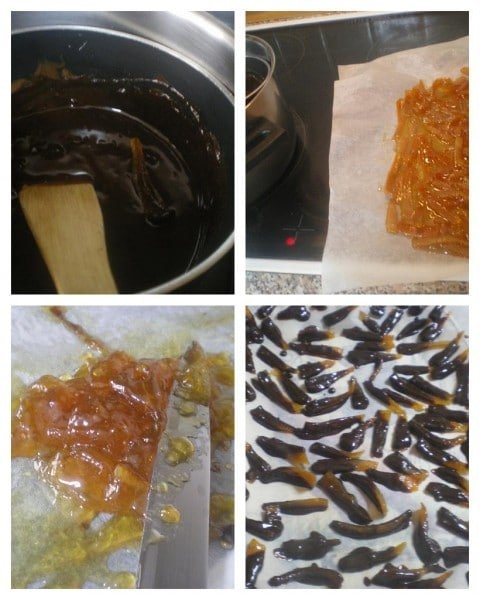 In a double boiler melt chocolate with butter and add heavy cream mixing to make the ganache.  Dip half of each peel in the mealted chocolate and place on parchment paper until they cool and then in the refrigerator until they set.

For Flavour and colour

2)       Combine 1/3 cream with pomegranate syrup, just enough to give it a pink colour

I am linking this recipe to the ‘Abbecedario Culinario Mondiale an event organized by Trattoria MuVarA where we will be visiting 27 countries around the globe, going alphabetically.

Today’s even is hosted by Simona Carini, of Briciole, who will be our host for the letter M as in Minneapolis (United States).

Wishing Everyone a festive Holiday Season filled with  Health and Happiness. If you put the frosting with a piping bag and then put the second whoopie cake they turn out really good.

They look tasty but I think WE should start a new trend :-)

These look wonderfully delicious! I haven't made any whoopie pies...might just give them a try next year :-))

I've never had a whoopie pie yet...and I guess I better get with the program...especially if they'll be plastered everywhere like the cupcake and macaron ;o)

I don't think I have tried Whoopie pies :O

Merry Christmas and a Happy New Year to you!