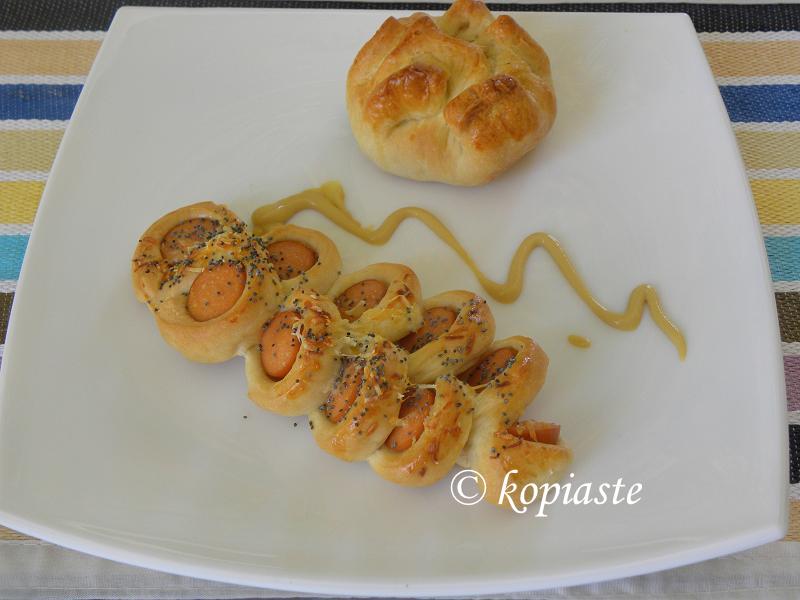 Soon after Easter I started watching my diet again but reading blogs all the day, there are some times I am really tempted to make some of the recipes I see.

Being on diet doesn’t mean that you can’t eat a dessert once in a while or a snack.  Instead of eating anything else in the evening, I ate one of these sausage breads or two cheese breads with a salad.

Here is what I made during the past month and still managed to lose 3 kilos.

When I saw these sausages on Fimeres blog, they looked so beautiful that I could not resist and made them immediately.  In fact I’ve made them twice this month.

Fimere writes in French and some times it’s hard for me to understand all the instructions and the google translator is not so reliable, so I decided to make the dough with the Tangzhong starter which I learned from Angie.

However, this time I made a few changes:   instead of using butter I used olive oil and instead of maple syrup I used honey.  Instead of adding the 70 grams sugar I just added a teaspoon to help the yeast rise and instead of milk I added water.   This dough is great both ways and I love how well it pairs with savory fillings.

I don’t know what kind of sausages Fimere used but I made mine with  chicken sausages. 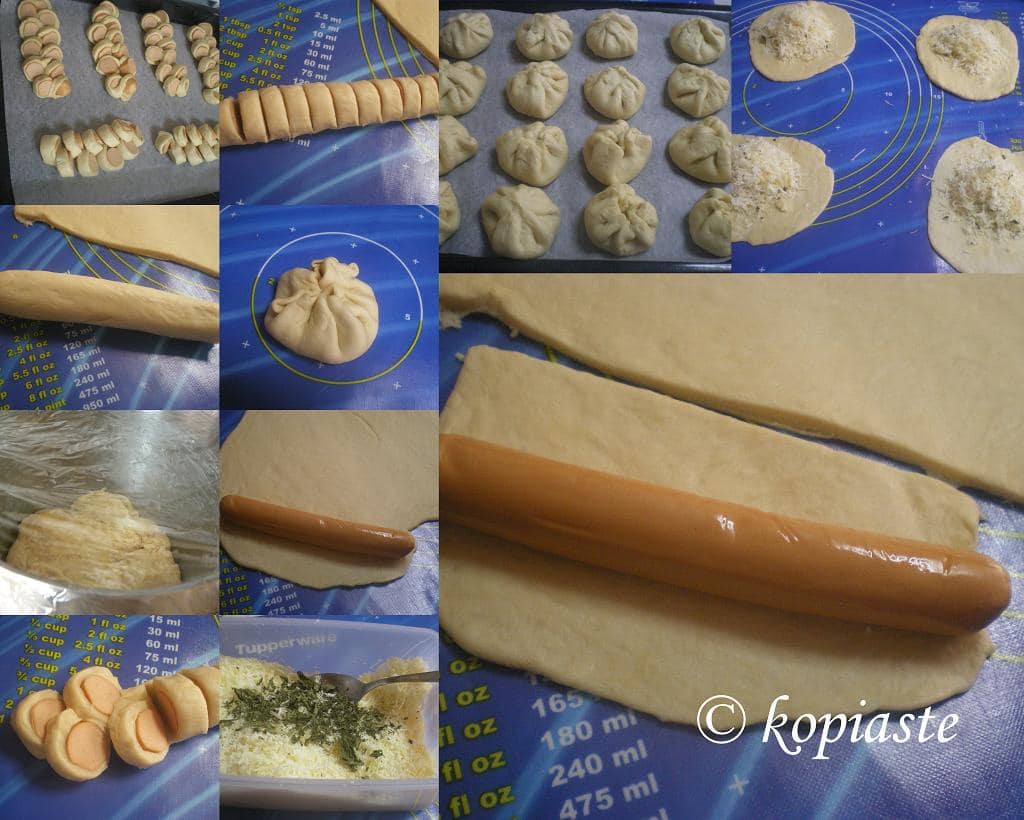 Ingredients for the dough:

Dissolve yeast with sugar and 2 tablespoons water.Place all the dough ingredients, except the oil, in a mixing bowl. Mix with dough hook at slow speed for 1 minute. Switch to medium speed, and continue to knead until a dough forms. Add half of the olive oil gradually and beat until gluten is fully developed, i. e. elastic and smooth.

Place the dough in a bowl and wet the dough with the remaining olive oil on all sides.Cover and leave in a warm place for about ½ an hour until the dough has doubled in size. Punch the dough and make a large roll.Cut it into 20 even pieces, which form each one into a ball again.

Meantime grate graviera and crumble feta or the other combination could be halloumi with graviera and mix in the dried mint.

Whisk the egg and add reserve 2 tablespoons for the egg wash which mix with a tablespoon of milk.  Add the remaining egg to the cheese..

Roll out each piece of dough into a round disc, as thin as you can and add a heaped tablespoon of cheese in the middle.Take the edges and join together to form a pouch.

Place each pouch in a lightly greased pan or on parchment paper and brush with the egg wash.

To make the sausages:

Roll out one big piece of dough.  Place the sausage on the dough and cut the dough, just enough to roll the sausage once.  Cut it into 1 cm slices but do not cut all the way through.  Take the first piece and twist it to the left and the other piece to the right and continue the same with all the pieces.   Place them on a baking tin lined with parchment paper and allow to rise.  Brush with the egg wash, sprinkle with some cheese and poppy seeds.

Bake in a preheated oven at 180 degrees C for about 25 – 30 minutes or until golden brown. 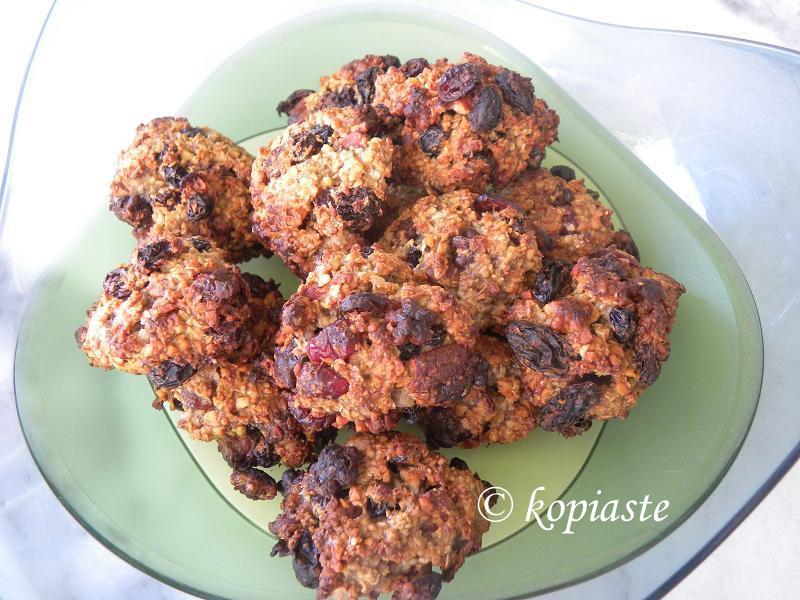 How could I resist not making these delicious and so healthy cookies.  There is no butter and no eggs in these cookies.  I made a few changes to this recipe, not that I did not like how Angie made it but because I did not have all the ingredients at home.  Instead of coconut shreds I added some leftover chocolate chips I had and grated almonds.  Finally instead of walnuts I used pecans and I added raisins, black currants and cranberries.  The remaining ingredients are the same. 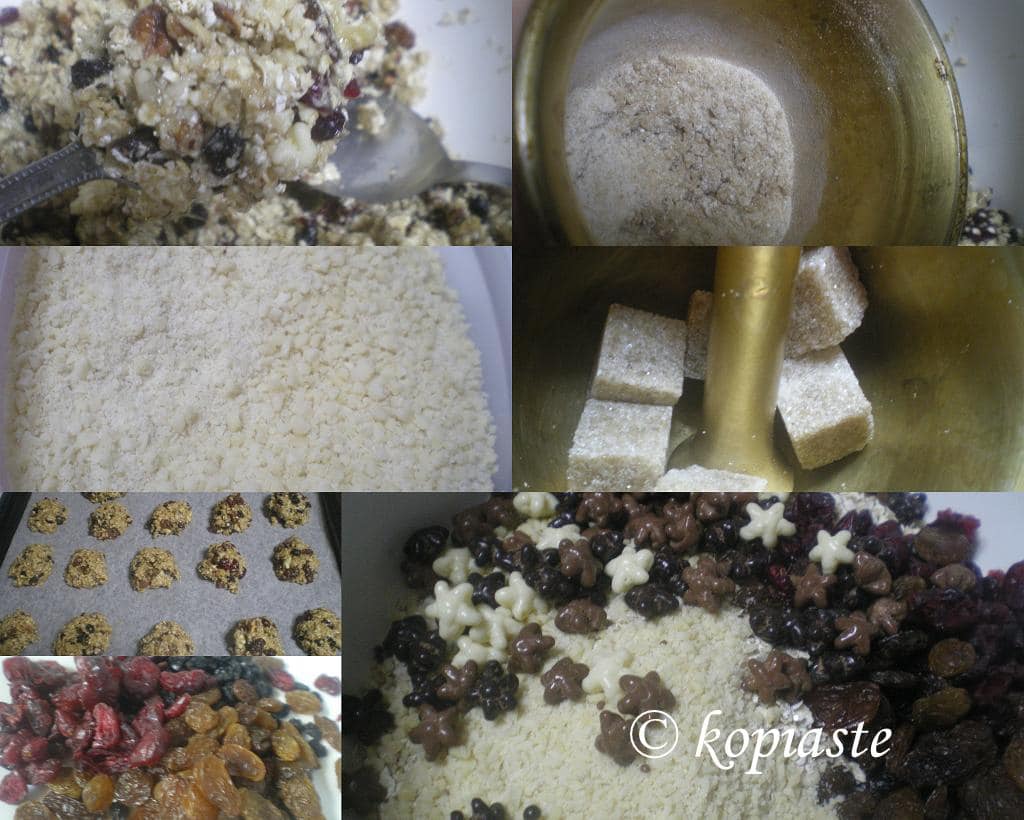 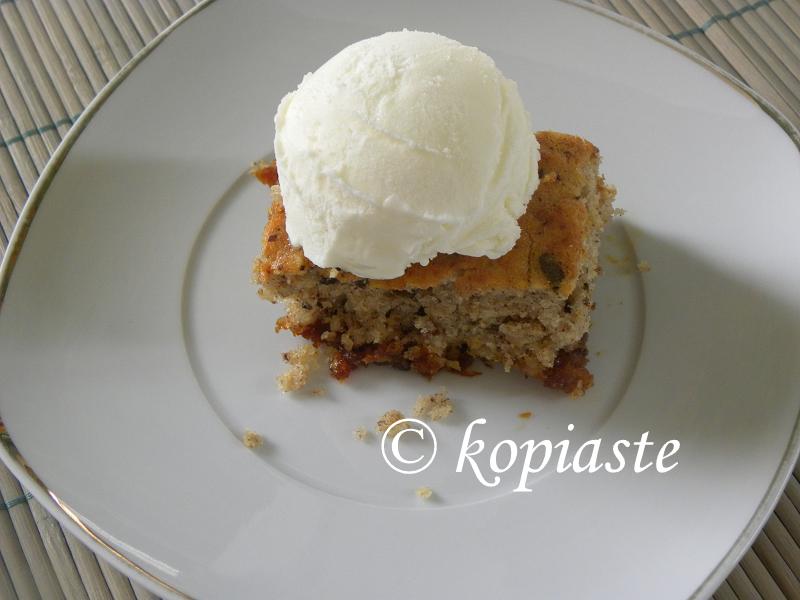 Regarding the last recipe, I was not planning to make a cake but I had unexpected family coming over yesterday and as I avoid making desserts the past month I did not have most of the ingredients.  I remembered seeing Kevin’s Banana cake in the morning and I had the ripe bananas at home.  I did not have all purpose flour, which I used the last to make the tangzhong snacks so I used self raising flour and omitted the baking powder.  I did not have brown sugar nor did  I have sour cream, which I substituted with yoghurt.  I did not want to use too much butter in this dessert, so I made a different caramel using water instead of butter.  I did not have chocolate chips and used some white chocolate chips and chocolate shavings I had leftover from other desserts.  As the amount was not enough, I added some blached and grated almonds as well.

I attempted to reverse the cake in a platter but unfortunately I did not think of brushing the baking pan with butter or placing it on parchment paper before adding the caramel and when it cooled it stuck to the pan. 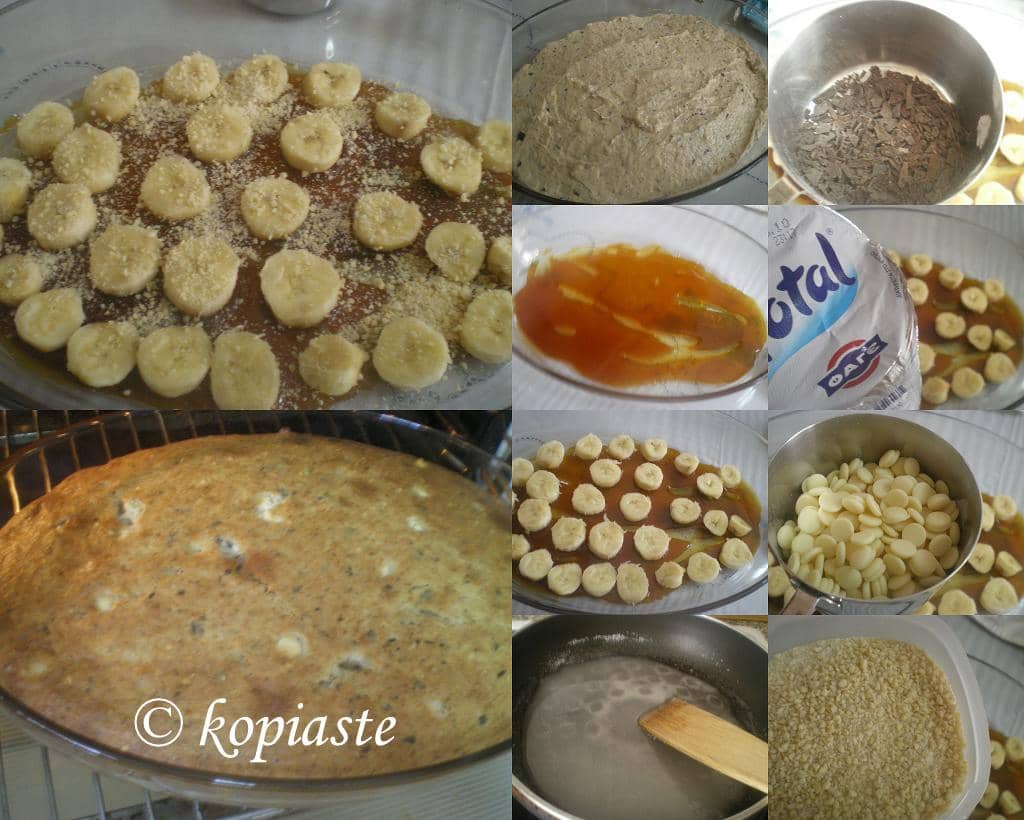 All recipes look delicious. I think I will give your cookies a try soon. My husband and kids like oatmeal a lot! My recent post Organic Strawberry Cupcakes

Maybe it's just me, but these "treats" seem healthy still! Okay, maybe not the healthiest, but you seem to be doing a great job at sticking to your guns on eating healthy, and even making your tempting treats not so bad for you! Kudos Ivy b/c not a lot of people do that, and I think with the smarts you have, you willl be able to continue reaching your weight loss goals!

Ivy you've outdone yourself. I can't imagine what you'd cook if you weren't on a diet! I fell instantly in love with the first recipe, the sausage rolls. I will definitely be making this. Magda

Seems you have been busy in the kitchen! It's true regarding "dieting" and eating well. Once in a while it's good to break out and try some things you may be missing...it never hurts. Love those cookies...very healthy Ivy!

It is very hard to resist making all the delicious food I see every day! The sausage rolls look really delicious. And I love the healthy cookies from Angie's blog. And last of all who can resist caramel and banana? Congratulations on your weight loss Ivy! That's great.