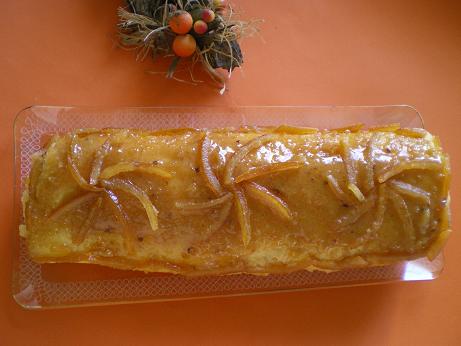 I am really sorry if I have not visited most of you this past week but as I have already told you my sister is staying with us and I have been working on this post for a whole week, mostly early in the morning, in order to be able to post it.

I prepared this recipe last Sunday, a day before my sister came and I finished it on Monday morning.

I wrote most of the post on Sunday, so that I could have something to post during this week but I did not manage to complete the post until today. 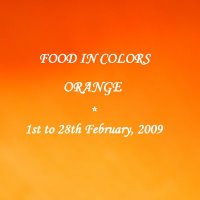 The roulade was a real challenge to make.  If I made this roulade in any other case I would definitely make the filling different, probably with a patisserie cream, but as this roulade was made especially for Aparna, of My Diverse Kitchen, hosting the event F.I.C. Orange, created by Harini, of Tongue Ticklers,  I had to make a lot of changes to make it vegetarian.  The event allowed only eggs to be used, so I had to make a cream containing no milk or butter.  On Sunday the shops are closed here in Greece and unfortunately I realized that I had no oranges at home but still I found a way to make it:  I remembered the Caramelized Oranges I made last October and still had some in the refrigerator.  The only problem was that the caramel had crystallized so I had to fix that as well.  Whilst I was making it I thought of various methods to use but kept changing my mind as I finished every step.

The following morning I thought that the glaze would not be enough so I decided to make the preserve and I was planning to make an orange icing but as I said things turned out well, so I left it as it was. 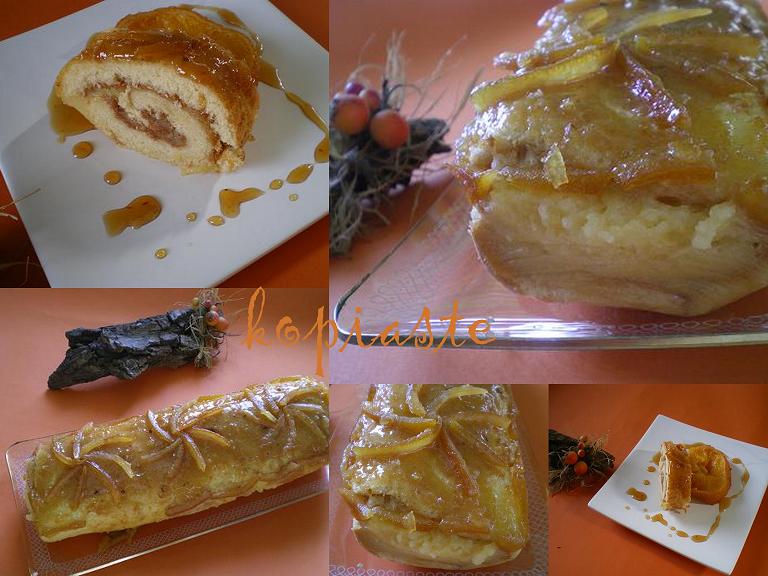 I prepared the same sponge cake I have made several other roulades in the past. 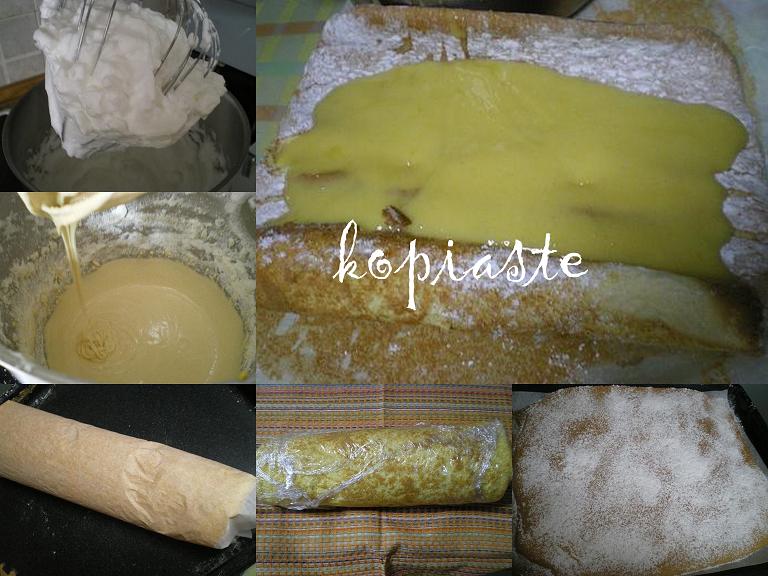 In the mixer bowl, whip eggs whites with lemon juice at full speed until they are stiff. Remove to a separate bowl and in the mixer bowl now add egg yolks with sugar, vanilla, rind and liqueur and beat until white.

Incorporate the egg whites to mixture slowly folding in mixture with a spatula. This way the air will remain in eggs.

Preheat oven at 180 degrees. Line a baking tin with parchment paper and spread the batter. Bake for about 20 – 30 minutes until ready.

Remove from the oven, sprinkle with icing sugar whilst it is still hot and with the aid of two paper napkins roll the sponge cake and set aside until it cools down. 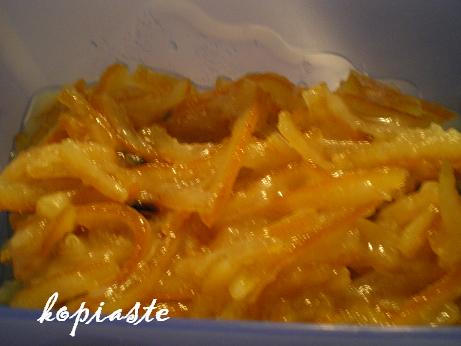 See how to make the Caramelized Orange peels from scratch here.

As I still had in my refrigerator some of the orange peels I made a long time ago and the only problem was that they sort of crystallized in the fridge so I had to fix them.   I  put the sugar with water, lemon juice and Grand Marnier and just before it started to caramelize, I added the orange peels and mixed them for a few minutes. 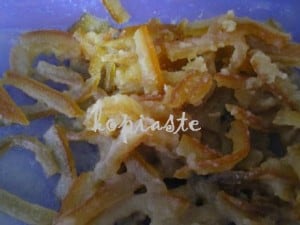 Place everything (except the peels) in a non stick frying pan and kept mixing.  Before they caramelize add the orange peels and mix. Remove from the heat before it thickens. 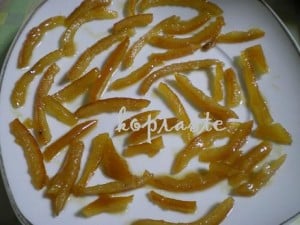 The remaining I put them in a food processor with the syrup and I pulpified it to be used the following day, as an orange glaze. 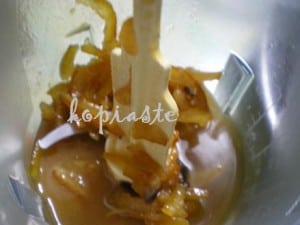 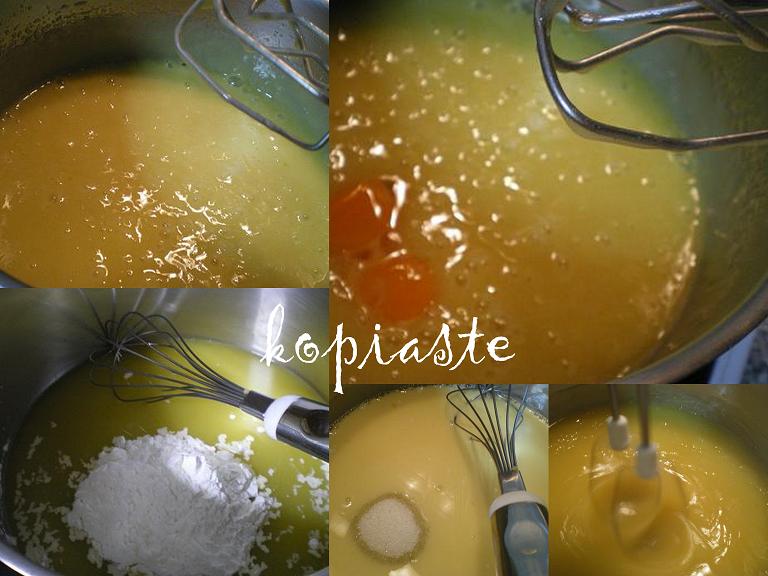 Use half of the orange juice and dissolve the gelatin.

In a sauce pan add syrup and remaining orange juice, grand Marnier, sugar and cornstarch and stir constantly. As soon as it starts warming (not boiling), add the orange juice with the gelatin and mix until it boils. Remove from the heat and with a hand mixer start beating for at least five minutes. Add the egg yolks and mix well. Set aside to cool down, not necessarily completely.

Fold again carefully and this time wrap it up in cling film and place in the refrigerator, preferably for at least three to four hours or better all night.

Note:  The above quantity was more than needed so you can reduce it by half if you like, or serve the cream separately with the orange preserve. 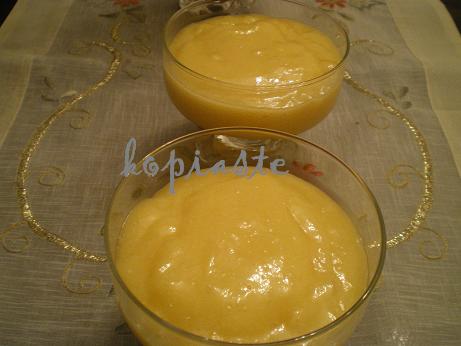 The following day, when I bought some oranges I decided to make an orange preserve to serve along with the roulade: 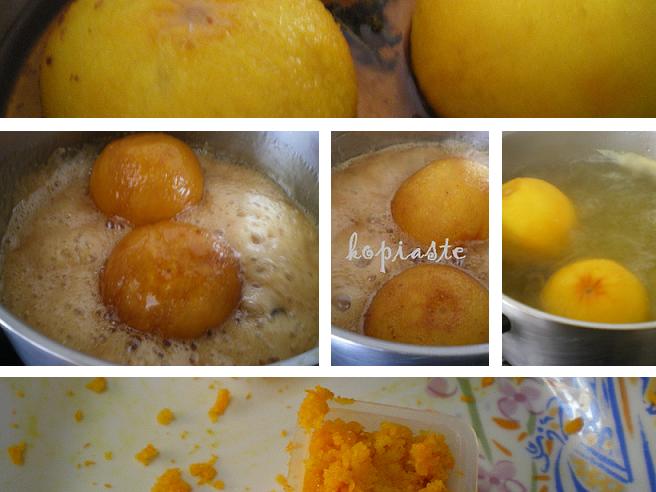 Wash and grate the oranges. (You may keep the zest in ice cubes in your deep freezer to be used in cakes).

Put the oranges in a sauce pan and cover with water. Bring to a boil, reduce heat and simmer for half an hour. Drain.

Prepare syrup by adding all the ingredients in a sauce pan and boil for five minutes.  Then put the oranges in. Bring to a boil and simmer for about 45 minutes. As the syrup is not enough to cover the oranges you will have to keep turning them over every fifteen minutes, until the syrup is thick.

Note:  Cut the oranges in slices, remove the white part and place in clean jars and cover with the syrup.  It may be preserved for a very long time.  (I have used it in many other cases during the past week).

Putting the cake together 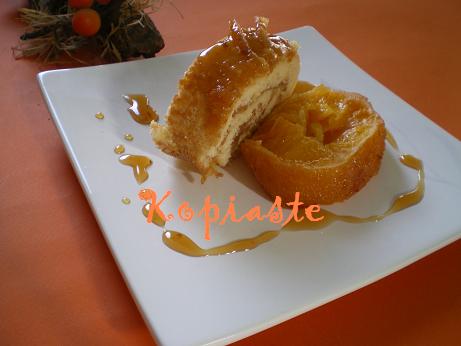 Serve with the orange preserve.

I am also sending this recipe to Lore, of Culinarty, for her Event Original Recipes.

If you liked this recipe you may also like:

Lemon or Orange and Chocolate Roulade

I love oranges, and this looks delicious. Very nice presentation.

I'm very surprised you're still sane. This really does look like it was alot of work and even more so with the changes you had to make. It does look gorgeous and I wish we could all have enjoyed it. A truly great submission.

I wouldn't have guessed it was lactose-free just by looking at the pics, it looks terrific! It's always nice to have an excuse to use up Grand Marnier ;) Thanks for sharing it with the Original Recipes Round-Up :)

This looks lovely Ivy - I especially love your floral decorations with the orange skin on top of the cake.

Your roulade looks very pretty, Ivy. And I am touched that you went to so much trouble just to send me an entry. I'm sure your sister would have enjoyed this. By the way, Ivy I am a vegetarian and do not eat meat and fish. Milk and milk products are fine. Thanks for making this especially for FIC Orange.