Weekend Herb Blogging, originally created by Kalyn, of Kalyn’s Kitchen, has now passed on to Haalo, of Cook (almost) Anything at least once, is now celebrating its three years anniversary and through this event we come to learn more things about herbs, vegetables, plants, edible flowers and fruit around the world.

All the entries that I have received were most interesting coming to see fellow bloggers using ingredients unknown to me, such as lemon balm, plantains, ginseng, mustard vegetables, bok choy , Jerusalem artichokes, chervil, or used other familiar ingredients in a different way that I use them, such as stuffed okra, sorrel leaves or stuffed artichokes.

I am sure that my entry with quince and geranium leaves were also unknown to many fellow bloggers living in parts of the world where these are not usual.
To find out more about WHB, or to sign up to host, visit Haalo at Cook (almost) Anything. To participate in this week’s WHB #162, visit Chriesi over at Almond Corner.

And on we go with the entries! Enjoy this lovely selection of recipes:

Anna, of Morsels & Musings, from Sydney, has made West African Plantain Fritters. 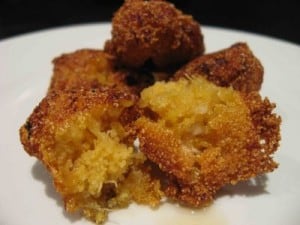 Anna describes plantains as very starchy fruit which are used more like a vegetable. They should usually be cooked before eating and are low in sugar content, although a black plantain (at its ripest stage) may be eaten raw.

Joan, of Foodalogue has made a Lemon Balm Pesto Pasta, to accompany her poached salmon and pasta dish. 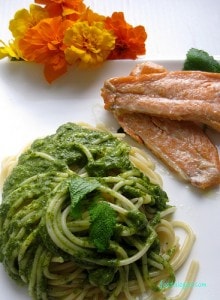 Joan, made a very interesting pesto with lemon balm, a perennial herb of the mint family which has a gentle lemon smell.

Ning, of Heart and Hearth, has made a Chinese preserved (salted) Mustard Vegetable Stir Fry with Eggs. 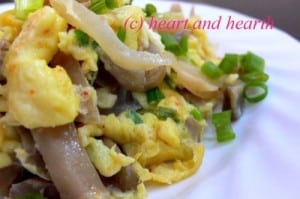 Ning has showed us how to preserve mustard greens and other vegetables the way her grandmother used to do. She used some of these salted preserves in a stir fry with eggs.

Marija, of Palachinka, has submitted a Sicilian Citrus Gelee. 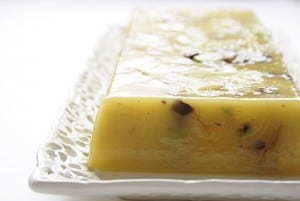 Marija has made this citrus gelee using four different citruses but as she says any combination of citrus may be used.

P.G., of My Kitchen Stories, has made Bharma Bhindi (stuffed okra). 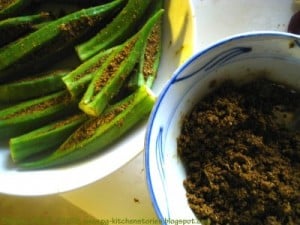 This is a traditional recipe coming from the state of U.P., in India and P.G. learned from her mother. Maria, like most women, is working and there are times when easy recipes are more than welcome. This type of spanakopita is easy to make as it does not involve rolling out phyllo.

Giz and Psychgrad, of Equal Opportunity Kitchen, have made a Pumpkin Date Bread. 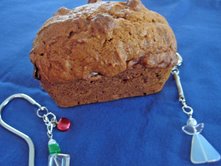 If you are planning to send a gift to your child’s teacher, something like the Pumpkin Date Bread, wouldn’t it be lovely to send some of these lovely gifts as well? Giz and Psychgrad are making them, they are quite cheap but elegant and a substantial amount of the profit goes to the World Food Program, through BloggerAid. Don’t think that it is too late, as my order from Canada to Greece arrived in less than a week.

My blogging sister, Val, of More than Burnt Toast has made Rachel Ray’s Spanakopita inspired burgers with Greek “Tude”. 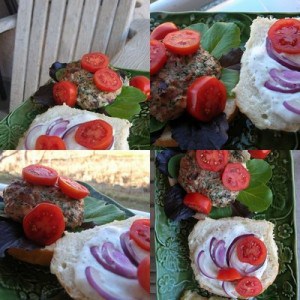 Val made some really healthy burgers with spinach and feta but she used a herb which is used a lot in Greek food. Greek oregano.

Jaya, of Spice and Curry, has made Notey Posto Labra, in other words Amaranth leaves Stir/Fry 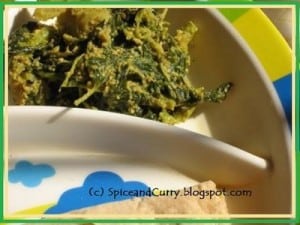 Jaya has prepared the Amaranth leaves in a very traditional way they prepare them in Bengal, an eastern region in India, with poppy seeds paste. Jaya says that Bengalis love to eat it with warm cooked rice. A little note from me. Amarath, is also very popular in Greece and the word comes from the Greek word amarantos (Αμάρανθος or Αμάραντος) which means the “one that does not wither,” or the never-fading (flower).

Lore, of Culinarty, has made another one of her original recipes: Herb Blend Gluten-Free Crackers. 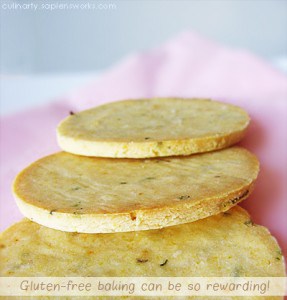 Lore made these gluten free crackers with a dried herb blend of thyme and rosemary together with spices.

TS and JS, of [Eating Club] Vancouver, has made GreekRibs with Tzatziki. 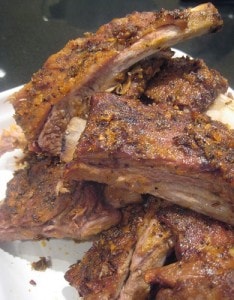 JS and TS made a lovely dry rub with bay leaves, oregano, thyme and spices. They did not have garlic and onion powder, nor lemon pepper so they improvised using fresh onions and garlic as well as black pepper and lemon zest. I love it when people are not afraid to improvise.

Brii, from Briggis Recept och Ideer, has made some Spicy Sweet Sour Grapes

Brii has preserved some grapes, in wine, vinegar and vodka together with some spices. This spicy sweet sour grapes are perfect together with roast beef or all sorts of meatpies as pork, chicken, liver or game.

Kalyn, of Kalyn’s Kitchen, has made a Greek Chickpea Soup with Lemon and Olive Oil. 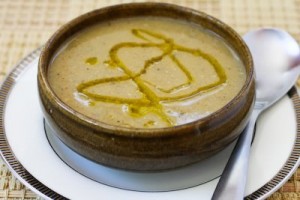 Revithosoupa, as we call it in Greece, is a chickpea (garbanzo beans) soup. Kalyn combined a few recipes and she couldn’t have made it more Greek than it is.

Mariana, from History of Greek Food, has made Sardines baked in Sorrel leaves (Sardelles se lapathophylla)

As Mariana tells us, traditionally, sorrel is cooked like spinach and vine leaves. In past, people stored it for winter, pressing tightly with salt in sealed bottles or air drying it. Although very popular in rural Greek cooking, today it is collected mainly by elderly women.

Wiffy, of Noob Cook, has made a Ginseng Chicken Soup. 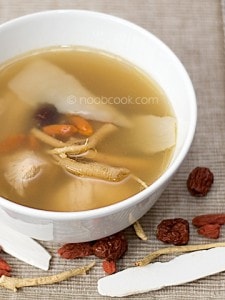 Rita, of Mochachocolata-Rita, has made a Beef & Bell Peppers Stir Fry. 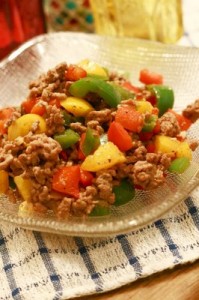 Rita, is making this dish with colourful bell peppers. Rita is having a colour therapy by exposing herself to the vibrant colours of the bell peppers.

Yasmeen, of Health Nut, has made a Ginger Honey Tea. 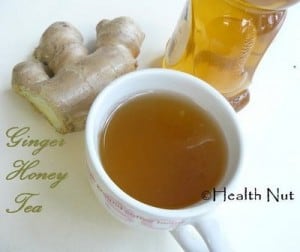 Did you know that ginger tea with honey is an effective common remedy for colds and flu? As Yasmeen informs us, sipping warm ginger tea can soothe sore throats, boost ones immunity and also helps in relieving nausea associated with pregnancy. 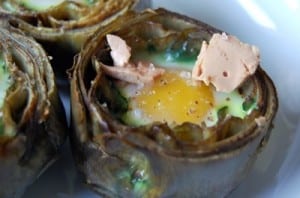 Do you know how many healthy properties an artichoke has? Nuria is telling us all about these properties such as diuretic, anti-inflammatory, reduces cholesterol and blood pressure, detoxifies, supports liver and many more.

Haalo, of Cook (almost) Anything at least once, has made Vine Roma Tomatoes show-roasted with Sherry. 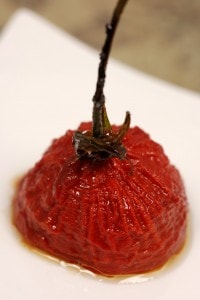 As Haalo says: “These are Amorosa Tomatoes – a brand new variety for me, they originate from the Netherlands. They are also known for their sweetness in fact, they are about twice as sweet as Roma Tomatoes”.

Rachel, of The Crispy Cook, has made a Jerusalem Artichoke and Green Spread. 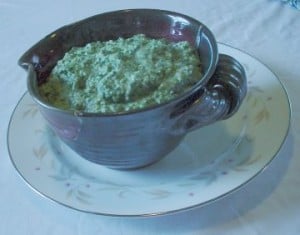 KC, of Kits Chow, has made a Thai Country Soup – Gang Som Recipe. 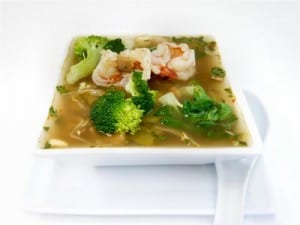 This Thai country soup is chock full of vegetables in a broth that is lemony, spicy and a little bit sour. It can be made with any vegetables at hand but KC used a handful of broccoli florets, baby bok choy, cabbage, mushrooms and frozen Romano beans.

Cinzia, of Cindystar, has made Grappa all’ Arancia aka Orange Grappa 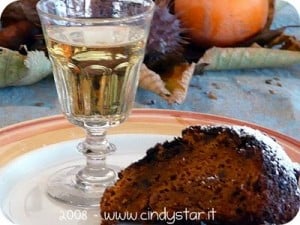 Grappa is a fragrant grape-based pomace brandy and with the oranges Cinzia made this lovely liqueur, similar to limoncello.

Virginie, of Absolutely Green, has made a Chicory Cream with Chufa nuts. 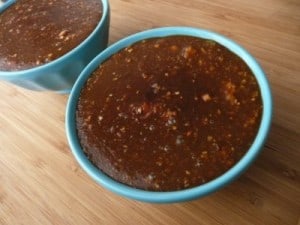 Happy Cook, of My Kitchen Treasures has made a Chervil Soup. 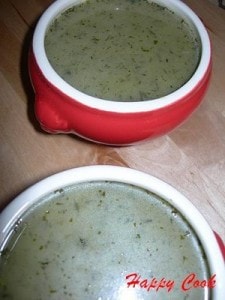 Chervil is a delicate annual herb related to parsley. Sometimes called garden chervil, it is used to season mild-flavoured dishes and is a constituent of the French herb mixture. Happy Cook combined this herb with peas, leeks and onions and made this hearty soup.

And finally my entry: 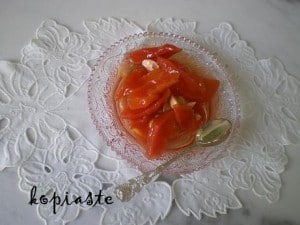 Fruit preserves, called spoon sweets in Greece, can be made from fruit, vegetables and nuts. Although Quince is not edible raw, when cooked it transforms into a nice red colour and all its beautiful aroma is released. I used the traditional way of adding extra flavour by using the fragrant geranium leaves.

Thank you all for sending your entries and don’t forget next week’s Weekend Herb Blogging which will be hosted by Chriesi of Almond Corner.

Previous
Coconut and Almond Macaroons and A Gluten Free Macaroons Cookie Recipe
Next
Is this Democracy?
Click here to cancel reply.

Hi Ivy, wish I had known about the event earlier :( ...would have sent in something too....i live on herbs..always prefer the natural over the synthetic/chemical drugs!

ciaooo ivy!! I'm back home again!! I heard about the problems in Greece, I'm so sorry.

Are you ok now? I really hope so!! You made a great job with this round up!! fantastic as usual!! thank's for hosting! lots of baciiiii!!!

An awesome round up! Great Job Ivy!!!! You know that I have that same geranium in my terrace? I didn't know I could use it in my kitchen!!!! I will give it a try for sure, love its aroma :D

Ivy, what a fantastic round up..and yes, quite a few unusual entries in there :-)