I have been trying unsuccessfully, to post a recipe for the past few days but unfortunately I cannot pretend that nothing has happened and still is happening here in Athens and other parts of Greece.     Most of you  probably are aware that after the killing of a teenage boy by a policeman last Saturday,  riots were set off in Athens and many other cities in Greece.   After all these incidents  I feel very sad and depressed and could not pretend that nothing has happened.

The incident itself broke my heart both as regards the unjustified death of a fifteen year old boy and I can feel the pain of his family and especially his mother and on the other hand I also sympathize with the family of the policeman and his innocent three children.

Nobody speaks about these three children as if they are non-existent, as if they should be punished for something they were not to blame of.  The media were in a haste to acclaim him as a cold blooded murderer before justice could decide on how the real incidents happened just to get some more spectators and some political parties have been silently encouraging the incidents for their own personal gains.

Things seem to be a bit calmer since yesterday but not quite.  My house is just a few metres away from a complex of school buildings and even now as I am writing I can hear groups of pupils leaving school, shouting and protesting.   Later on there will be demonstrations in the town centre and some of these pupils are going to join others from other schools.  Nobody knows how these incidents may end. 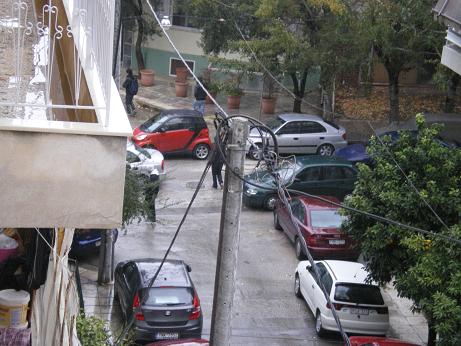 I would like to thank all of you who sent me e-mails asking about the situation and about how my family and I are.   At the beginning I misjudged the situation and reassured you that it was nothing serious as during the past decades we are used to similar acts by a group of anarchists who decide that the properties of innocent people should be vandalized.

Now we have to indulge with a third group of people, mostly illegal immigrants, who take advantage of the riots and invade behind them, looting the shops.    Hundreds of shops have been destroyed, burned and looted and as we speak 3.500 employees have been affected and are now unemployed and there will be more economic repercussions as this situation is affecting a whole group of people employed in the city centre.

Christmas celebration seems to be meaningless with all that’s going on but we hope that these incidents will fade out and peace and tranquility will prevail again.

Glad things are calming down now. It is all so unfortunate. I'm glad to hear your thoughts about it, as there are always parts of the story that mainstream media always leaves out. My thought are with you and wish you a peaceful holiday period.

Ivy, I did see this on tv and in the the papers here. And happy to know you and your family are safe. It is indeed a sad thing for the families. Unfortunately, there is a flip side to democracy as we well know in India too. But the good thing about our democracies is that we have the freedom to talk about these things and try and make a change for the better with our voices. Many countries don't have this.

Hi Ivy, Glad that you're ok. I read so much about the riots and demonstrations in Athens that made me sad and angry as well.

I felt the world should listen to all sides from the victim, witnesses and the accused. Much I dislike were the others - the 'opportunitists' who took the chance to add more commotions for their own gains. Their behaviours was to vent frustrations against government but they never think 2x the affects they brought to their own family and friends whose livelihood depended on country's economy. The worst were the looters who seized such opportunity to rob and destroy the host country. News agencies didn't help much either to calm down the country, their only thoughts were ratings and sales. It's time news agencies should find out the truth of the shooting case instead focusing on the rioters and demonstrators... It's sad and terrible that such event happened to a teenager. The deed was done and nothing can bring back the teenager. Until we know 'Who Starts the Fire' everyone are suspects.

I'm worried for my Greek friends as well who still haven't replied my sms and calls...

Please take care of yourself and family, ok?

I was reading about the disturbing riots in another Greek bloggers post.The youth vandalizing the city obviously don't have any rationale thinking.It only make the situation bad to worst.Its a relief to know you and your family are safe Ivy.

Ivy, may you and your family stay safe during these trying times. I have spoken with members of my family in Athens and elsewhere in Greece and from what I understand, the situation seems to be easing at the moment. These events are troubling. I find it hard to believe that the shooting of the 15 year old boy sparked this kind of response. It would seem to me that there are other underlying issues that have fanned the flames of that unfortunate incident to spread chaos and lawlessness. The situation is truly tragic, and you are right, the media did not help matters. Anyway, take care of yourself and your family.