Today is 1st of October and in 1960, this day Cyprus gained it’s Independence from being a British Colony and before that being under Turkish rule for hundreds of years.

Although half Cyprus is still under Turkish occupation and nearly 2000 Cypriots are missing, one of them in my family, it’s still important that we are still an independent state, with Turkey threatening every now and then to occupy all the island.

So Happy Independence Day to Cyprus.

Βefore starting reading all the posts I highly recommend that you get a bib-napkin as you will not stop drooling for a long time. Bloggers are so talented cooks that when there is an event going on they improvise and make the MOST but I mean the MOST delicious dishes. They are not only talented cooked but also stylists, photographers and writers. Instead of spending your money on cookbooks, bookmark the whole event and voila, you have a cookbook on Savory Pies.

I have posted the entries in the chronological order they came in. 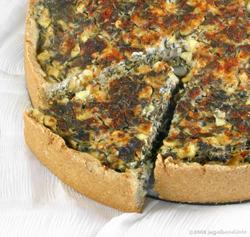 Vegan Quiche with Swiss Chard and corn, by Bee and Jai, of Jugalbandi. Bee, describes her recipe as a tofu quiche with homegrown chard and fresh summer corn enahnced by the perfect oatmeal crust. 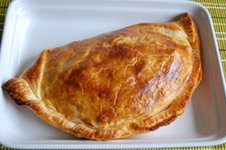 Empanada de Chorizo, by Nuria, of Spanish Recipes. Nuria says that this is her first Empanada but it will not be the last. It has veggies and chorizo as a filling, but you can choose any other ingredients you want. 😀 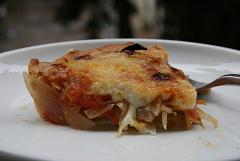 Arundathi, from My Food Blog, has submitted a Tarte Dijonnaise. A French Tart made with tomatoes and onions in a mustard base. 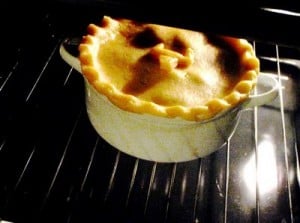 Dee, of Choos & Chews, has submitted a Wagyu and Beer Pie.

Dee says, while beef pies are generally hearty, this is unusually light. The blonde beer is a mellow complement to the meltingly tender beef, and the shortcrust that encases it is delicate and lightly scented with thyme.

Note from me: Wagyu cattle, for those who do not know, are genetically bred to produce not only for its flavour but also it has monosaturated fats. 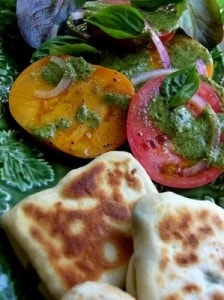 This is what my blogging sister, Val, of More than Burnt Toast has to say for her entry: “Part of the fun of blogging is discovering previously unheard of dishes from other cultures and cuisines. I discovered Gozleme while browsing through posts. I became fascinated with this traditional savory handmade and handrolled Turkish street food.” 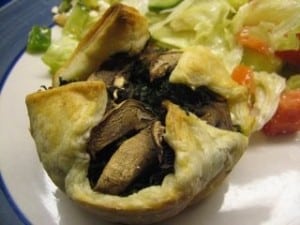 Psychgrad and Giz, of Equal Opportunity Kitchen have made some Mini Galettes. Psychgrad says: These mini-galettes are versatile, quick and taste great. The pies are filled with zucchini, spinach, chicken, feta cheese and mushrooms, but can be adapted for any meal of the day and any flavour preferences. 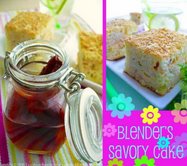 Sylvia, of La vida en Buenos Aires, has made a Blender Savory cake Filled with cream cheese and sun dried tomatoes, by making good use of all her leftovers making them into a savory pie. As Sylvia says : This savory pie can be filled with almost anything. Easy and quick is ideal for timeless days. 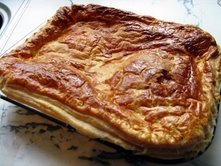 Kittie, of Kittens in the kitchen, says about her Scottish Steak and Sausage Pie :

“This is my mum’s recipe for steak and sausage pie – a sure-fire favourite with most Scots! The base is slow-cooked skirt of beef with beef sausages, topped with flaky puff pastry”.

Arfi, of HomemadeS, has prepared some delicious Spinach Tartlets.

“Truly great friends are hard to find, difficult to leave, and impossible to forget.” (G. Randolf) 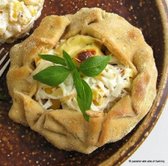 “I made these pies with left over home-made pizza dough & to finish off loads of left-overs from the fridge, & using Christine Cushings winning tomato sauce. These are a vegetarian option, & I think they would taste great with chciken too! They are just for Ivy!!” The exact words of Deeba, of Passionate about baking, for her Savory Mini Galettes.. 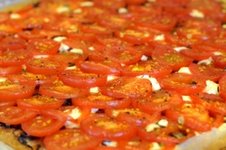 Mike, of Mike’s Table, has made a Phyllo tomato Goat Cheese Tart. Mike says that it’s like a pizza, but lighter fare. This starts with phyllo dough which is topped with a strongly flavored mushroom duxelle, fresh basil and thyme, tangy goat cheese crumbles, and thin slices of sweet campari tomatoes. Great for a starter or a light meal. 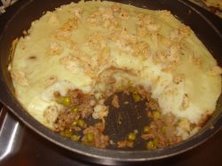 Savoury mince and vegetable filling topped with a mashed potato and parsnip crust, is the Shepherd’s Pie, prepared by Cakelaw, of Laws of the Kitchen, in Australia. 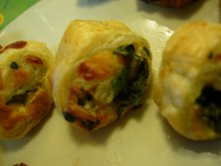 Divya, of Dil Se, made some lovely Spinach Cheese Swirls. Divya says: This is a savoury appetizer made using puff pastry, cheese and spinach and baked to perfection! 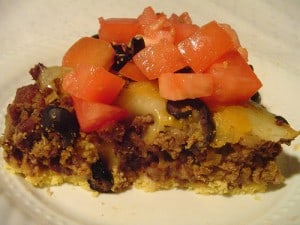 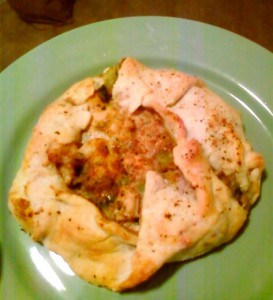 Nikki, of Nik Snacks made a Savory Chicken and Broccoli galette, in no time. This is how she describes it: Enter stage left: Frozen chicken breast and broccoli and leftover gravy. Easy and simple, it came together in a flash. I ate some from-the-bag potato flakes while I waited for it to bake (yes, I added water, butter and microwaved them, too). And it was worth the wait. 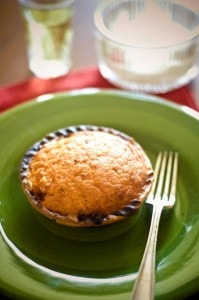 Slow braised pork and black beans encased in a short crust pastry shell and covered in a smooth sweet potato mash is the savory pie, made by Peter, of Souvlaki for the Soul. 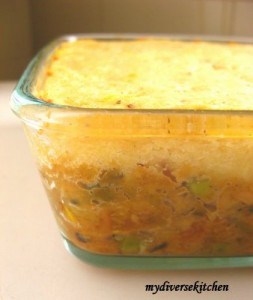 Aparna, of My Diverse Kitchen, was inspired to make a Vegetarian Shepherd’s Pie taking part in another food event where they read and cook something that was inspired by that book. Reading all Harry Potter Books to her daughter, instead of cooking “Chocolate Frogs, Cockroach Clusters, Broomstick Salad, Tooth Flossing String Mints or Jelly Slugs” mentioned in the book, she preferred to make a more traditional British dish instead. 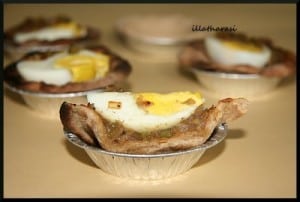 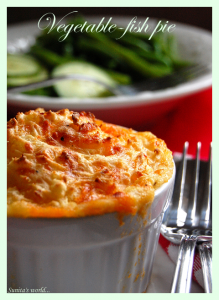 Sunita, of Sunita’s World, says about her Fish and Vegetable Pie, that as the name sggests, this is a pie filled with salmon and an assortment of vegetables, simmered in milk,covered with a light white sauce (no butter) and topped with creamy mashed potatoes. Baked in individual ramekins, they are very pretty to look at and easy to eat from too. 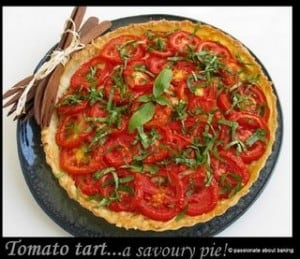 Deeba, of Passionate about Baking, is participating with a second entry. This time with a Tomato Tart. “I made this delicious tart from a bookmarked recipe from Mimi’s blog…added a few things into it, but the basic idea was hers. It’s lower in fat because I made 2 bases out of 1 lot of dough…& they were great!” 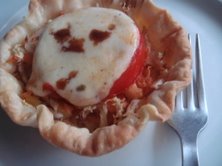 “Easy, simple n cheesy Pie with leftover salad..they goes awesome as a starter before lunch r else for dinner with mildy spicy soup..can prepare them within half an hour…” 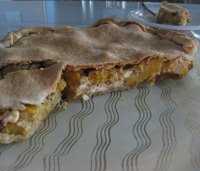 Maria, of Kali Orexi, has participated with a Kolokythopita with Fennel. Maria say: I put together a kolokythopita using winter squash, fennel, onion and cheese along the lines of a traditional Greek pita. The phyllo was a crunchy layer of crust traditionally made on the island of Crete. 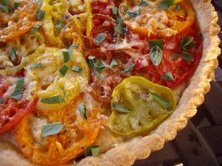 Becke, of Columbus Foodie, say that the Heirloom Tomato Tart was inspired by one she picked up at the farmers market by a local baker. Once she saw the beautiful heirloom tomatoes at the market, she couldn’t resist trying to replicate the tart there at home. 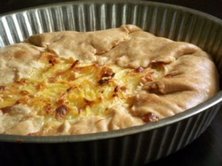 Manuela, of Baking History, says that she just made a tasty savory Potato Pie filled with potatoes and onions, milk and a touch of butter. She says that her pie is a simple one, but I would say that sometimes the simple ones are the best. 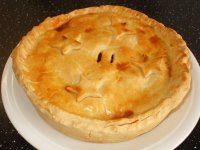 Rosie, of Rosie Bakes a “Peace” of Cake, was taken ill and posted her recipe with one day delay. As this is not a competition but merely showing what lovely food you have created, so it’s a pity you do not see this lovely Beef and Veggie Pie, as well.

Last but not least a few pies I have submitted a few pies. 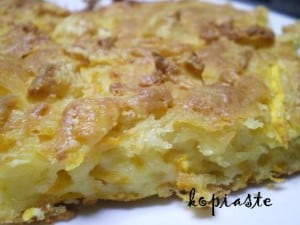 Badjina, the Naked Pie. They call it ksevrakoti, meaning without its underwear, as it is a pie without its knickers, the phyllo 😛 It is the most easy of all Greek pies and no special skills are required to make it but it tastes great. 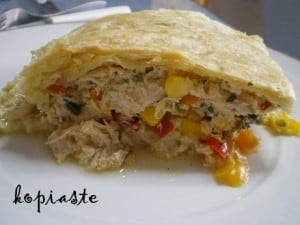 Chicken Pie. This is a quite rich pie made with ready made puff pastry, chicken breasts and vegetables but I usually make it when I have leftover chicken. 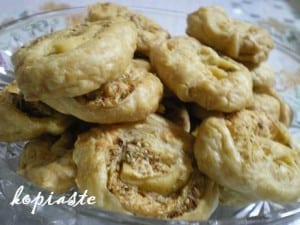 Anything with phyllo and something inside it we call it a pie in Greece. I used ready made kourou phyllo and used graviera cheese and spices to make these Easy, cheesy snacks

Hope you enjoyed participating as much as I did hosting this event.

I regret that I did not offer a prize to reward all your efforts and to thank you for making such lovely pies. So, in order to thank you I am hosting a second event about Sweet Pies. You can start making them as from today and until end of October. I wonder if your can guess what the prize will be but in my opinion, I think that after cookbooks, this is something every Foodie would like to have in his / her Kitchen and it’s not plastic?

Let me see if you can guess. I shall announce the event and the prize tomorrow.

I'm quite late at this round-up, but better late than never. And truly so in this case, because I like things savoury and what better than pie? I can see quite a few here I wan to try. Thanks, Ivy for lovely theme.

Wow awesome round up.

Wow, what a great assortment of different types of pies. Looks like you had a great turnout for this event! I was going to get in on it but I havn't baked a pie before, maybe the next one?

that'a an amazing bunch of pies! I'll spend lots of time studying them and trying to pick a few, i think it will take me veeery long!