Hortosoupa or The Bing Bang soup, as I call it, is a hearty velouté vegetable soup with star shaped pasta, which can be adapted with more vegetables.

It is healthy and filling and can be eaten as a starter or a main dish.

I was inspired to make it because what is about to go on at Cern in a few days.

According to the Big Bang model, the universe expanded from an extremely dense and hot state and continues to expand today. A common and useful analogy explains that space itself is expanding, carrying galaxies with it, like raisins in a rising loaf of bread. General relativistic cosmologies, however, do not actually ascribe any ‘physicality’ to space. (Wikipedia)

It is now a fact that on the 10th of September 2008, the count down will begin at CERN, after 10 years of research, and costing 6 billion Euros, for the operation of the Large Hadron Collider – LHC.

You may read some more information here.

See how huge this is!

It seems that the reporters are very worried about this project and they asked a Greek Scientist, who is taking part in this project if we should be concerned if anything goes wrong, the scientist was very reassuring that there is no possibility about this.

I am also worried as my younger son is now working at CERN. Last summer he worked as a summer student for three months, but this year he is working on a regular basis. He also reassured me that there is nothing to worry about but I am keeping my fingers crossed.

The reporter asked a lot of questions and then she asked:

Reporter: What was there before the Big Bang?

Scientist: It’s not easy to describe but I would say that the universe was like a “soup”. (The essential idea is that the universe has expanded from a primordial hot and dense initial condition at some finite time in the past and continues to expand to this day. Then came the Big Bang and the universe began to form).

I was not planning in making soup today but I was cooking fish, to make fish mayonnaise.

After this conversation I was inspired and tried to recreate the universe by making my own soup and guess what?

The first solid things that formed after the big bang were two tomatoes, one potato, one carrot, one onion and a sprig of celery.

Finally, the stars appeared. I wonder if the croutons are the galaxies, the black pepper, star dust and what is the parsley…?

Although it is still hot in Athens and the air condition is on all day long, the soup was so delicious that we all had seconds.

After boiling the fish for fifteen minutes, remove and drain the stock.

Place the vegetables in the stock, you do not need to cut them, add salt and simmer until they become soft. 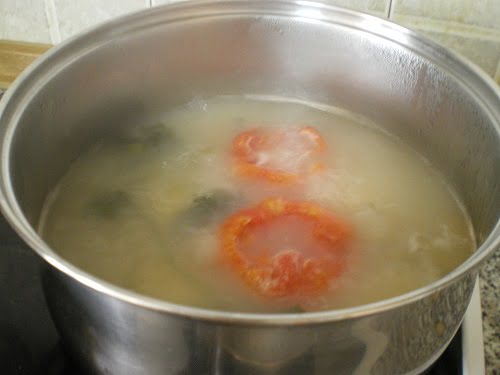 Puree the vegetables with a hand blended.

Finally add the pasta and cook for 15 minutes. 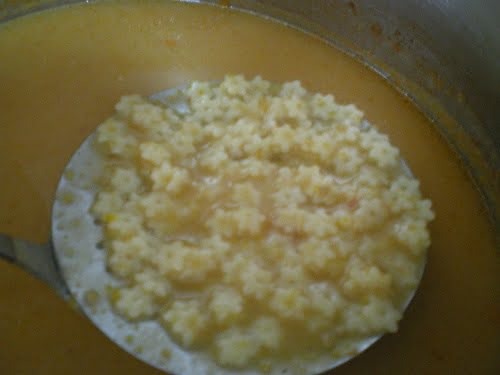 Serve the soup with some croutons, parsley and freshly ground black pepper. 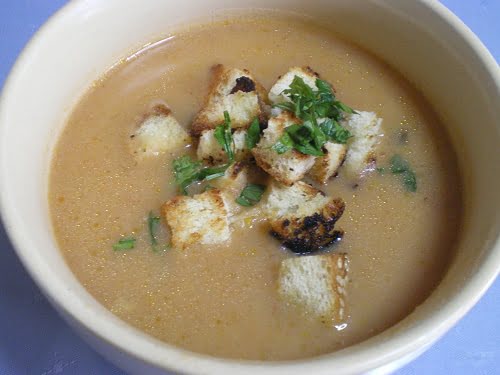 All's well dear Ivy. Just heard on the news that it's been tested successfully...rest easy now girl!! My email is acting up, so couldn't send a mail; decided to leave another comment. xoxoxo Deeba

Deeba you are so considerate. Thank you very much for being concerned. As a matter of fact just spoke with my son. They are still watching the webcast at CERN on screens and everybody was applauding when they saw a tiny dot appearing on the screen and lots of wackos gathered outside CERN doing lots of silly things.

Thanks everybody for commenting.

Very interesting write Ivy,well done. And the soup is great, looks delicious and easy to make